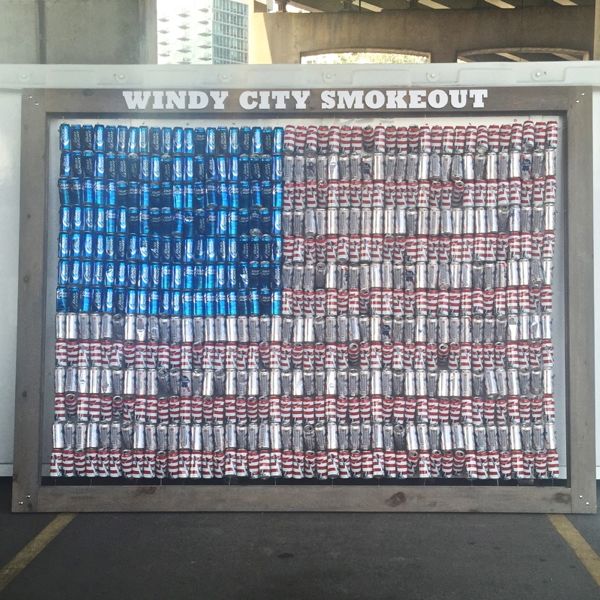 I can’t stop thinking about how much fun I had over the weekend! The third annual Windy City Smokeout took over the city, in the best way possible. I attended the festival in 2013, and had to miss it last year. Since its first year on the scene, the festival has moved to a new location beside the Chicago River, and more than doubled in size. This festival celebrates beer, barbecue, and country music is definitely the nicest festival in Chicago. 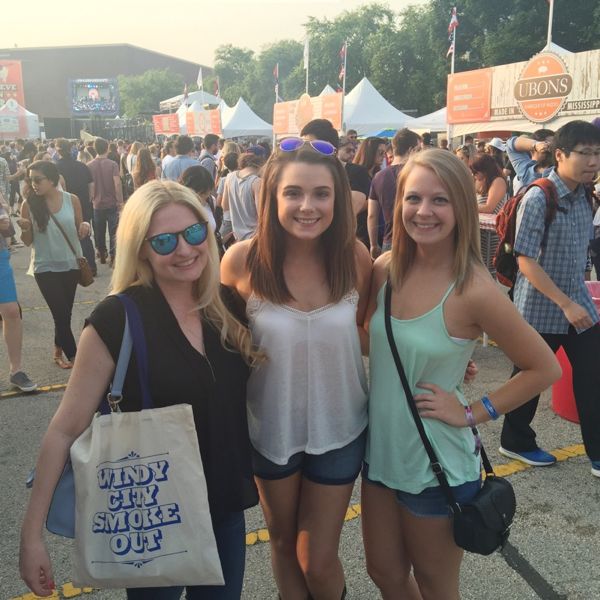 What do I mean when I say that it is the nicest festival in Chicago? It’s more upscale (but magically, the price is cheaper). A large space in an underpass was transformed into a craft beer bar with rustic rope chandeliers. That same space offered relief from the rain on Saturday, and the hot sun on Sunday. (I can’t think of another Chicago music fest that has so much covered space). Several of the food vendors were set up in the most adorable wooden store fronts, and the food offerings included fresh lobster rolls, fried chicken, and sweets from Summer House in addition to barbecue. Two other wonderful things: the bathrooms were bathroom trailers with running water, and valet parking was available. 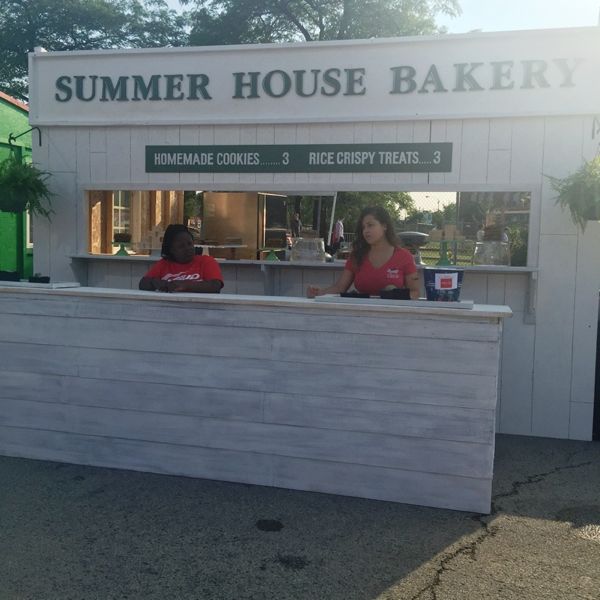 The size of the festival is big, without being overwhelming. The two stages are less than a five minute walk apart, meaning that you won’t miss a minute of the music. Even if you aren’t a country music fan (Charles isn’t) it’s worth going to WCS for the food. I loved the opportunity to try so much amazing bbq in one place. The WCS brings Chicago’s top bbq restaurants, competition teams, and pitmasters together. Festival goers have the opportunity to try local favorites and food presented by visiting bbq masters.

Now let’s get to business and talk about all the food I ate: 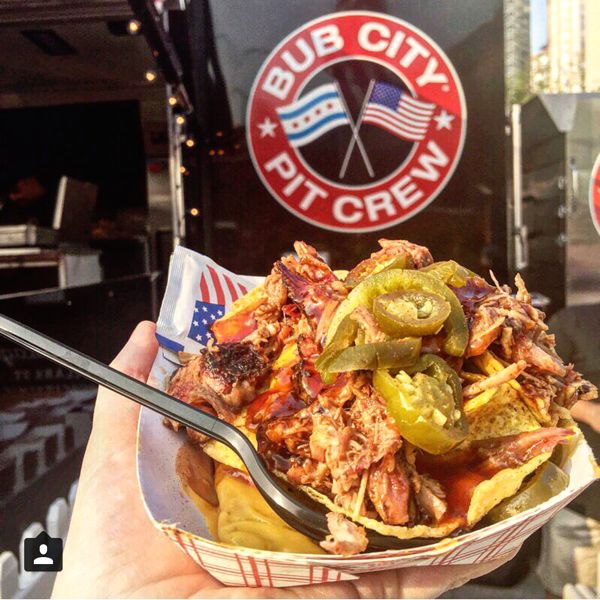 The first thing I ate was the BBQ Nachos from Bub City. Tortilla chips were covered in a nacho cheese sauce, and then topped with bbq pulled pork and jalapeños. The barbecue sauce had just the right amount of heat, and the cheese sauce balanced the spiciness perfectly. I think that everyone ate these at some point during the weekend. 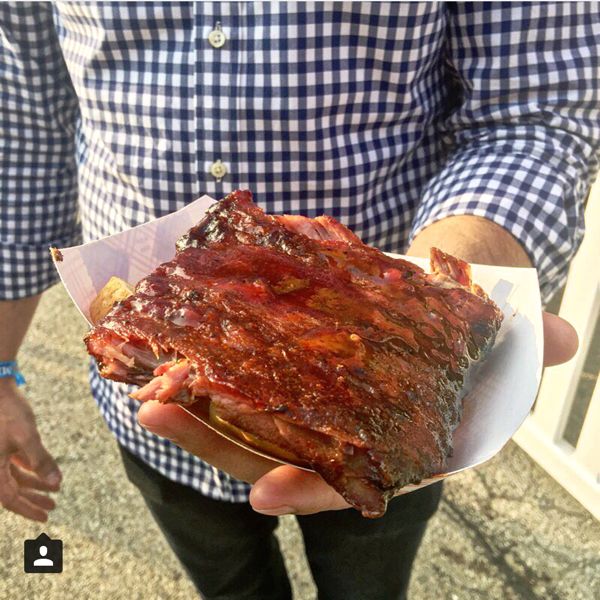 When Charles arrived he had one thing on his mind: ribs, and we ate every bite of these ribs from Hogapalooza, who drove their rig up from Arkansas. I think Charles is doing some great hand modeling here. 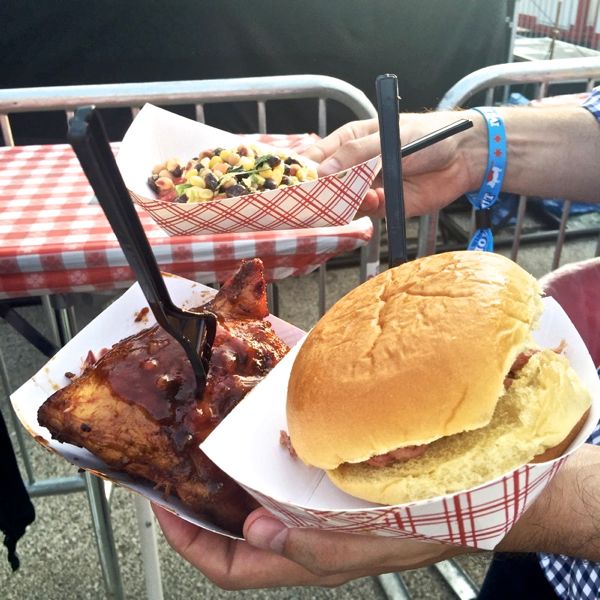 Charles can eat. So he went back for more. He hit up Ubon’s for a pulled pork sandwich, smoked chicken, and a side of delta caviar (a corn and black bean salad that I ate most of). Ubon’s is a competitive BBQ team with a restaurant in Yazoo City, MS. 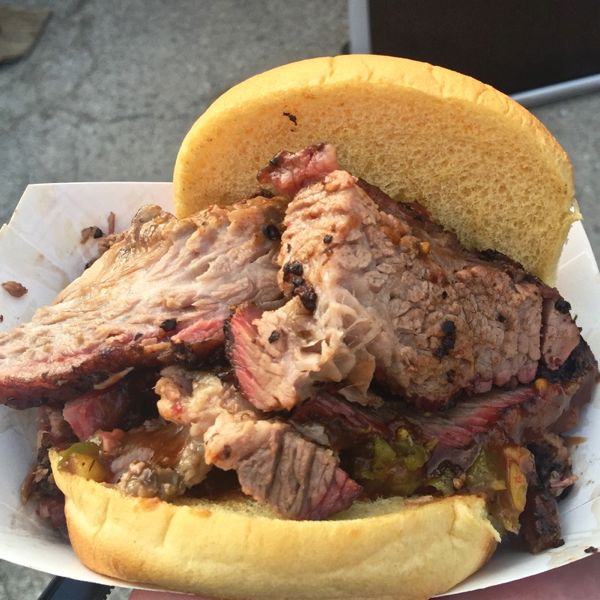 Did I mention how much Charles loves BBQ? He made room for the smoked beef brisket sandwich from Lillie’s Q. He also loved their tri tip – and he ate it before I could snap a photo. 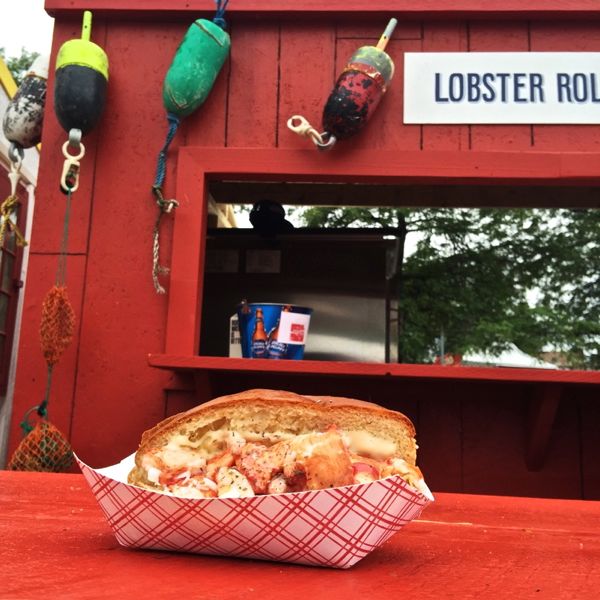 There were different food vendors at each of the stages. The BBQ joints were by the main stage, while the other food vendors were at the second stage. Since I had tried so much barbecue on Friday night, my friend Lauren and I visited the second stage food vendors on Saturday – and we did not hold back. The lobster roll was magically delicious, and I think that the secret was a herbed butter. The lobster came from a Chicago distributor, and the rolls were made by Lettuce Entertain You staff – so this was a unique WCS offering. 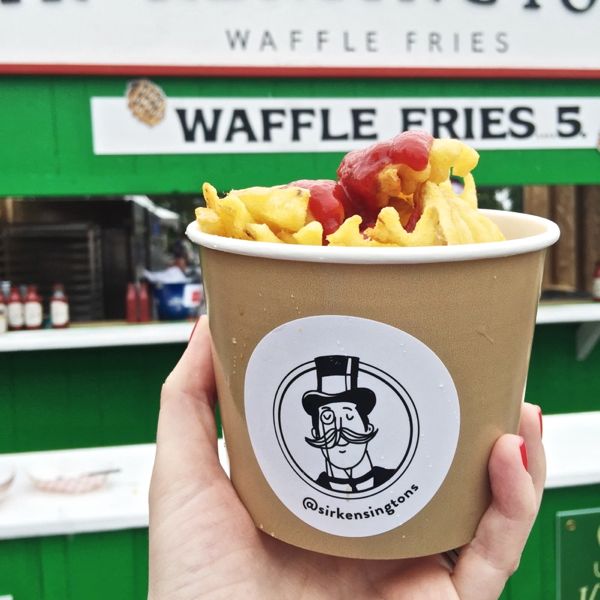 Sir Kensingtons is a sauce company that was using waffle fries as a vehicle for its sauces. I simply loved their spicy brown mustard, and was thrilled when they gave me a bottle to take home. The fries were so popular that they briefly ran out of them. 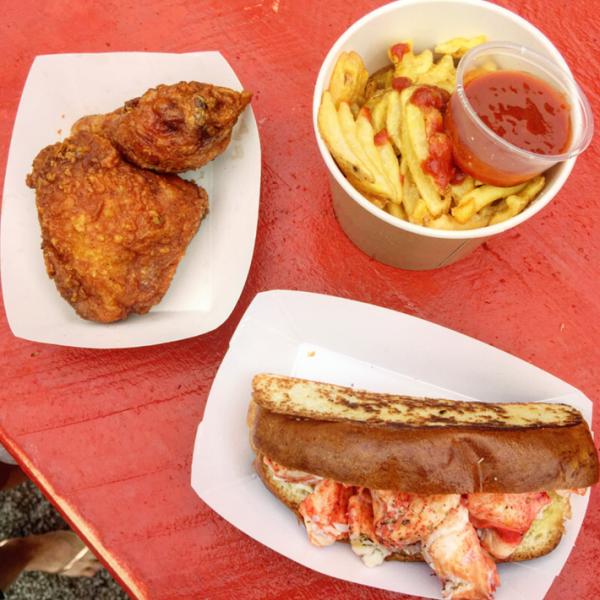 We rounded out our meal with some fried chicken from Gus’s Fried Chicken. This perfect crispy fried chicken had a nice spicy heat to it, and the chicken was super moist and tender. 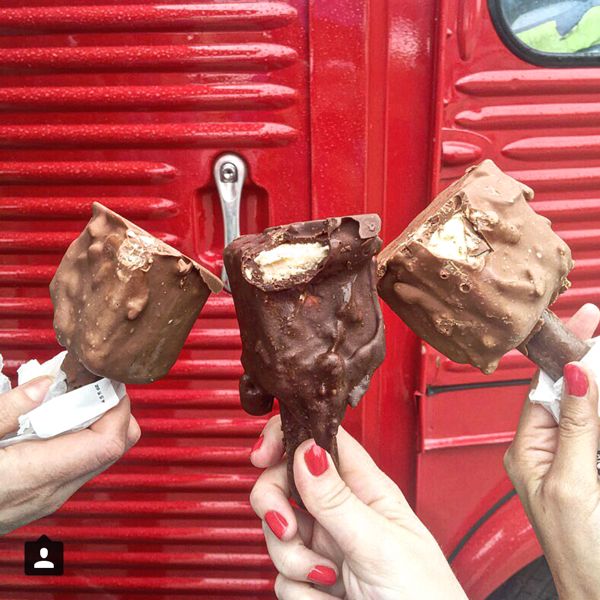 The dessert people couldn’t stop talking about – or Instagramming was The Crave Bar. These ice cream bars are on a pretzel stick, so you can eat the entire thing. Plus, that pretzel is dunked in caramel and then coated in chocolate. Look for The Crave Bar truck out and about in Chicago this summer. The dark chocolate salted caramel is in the center, and the peanut butter milk chocolate is on the ends. Surprisingly, these were the messiest things to eat at the fest. 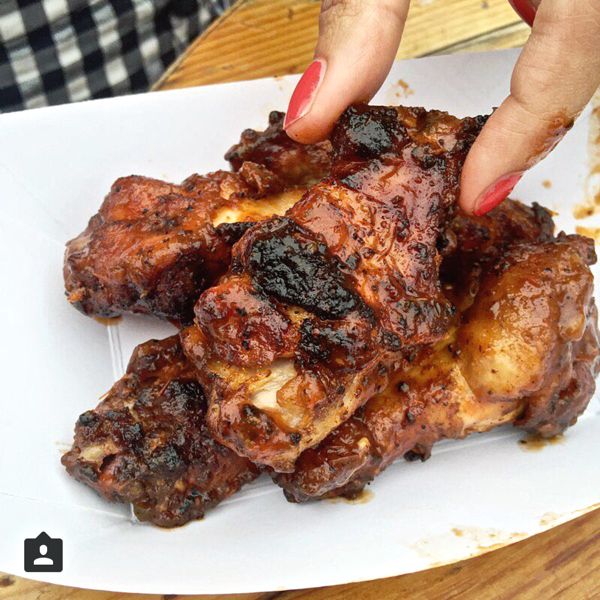 Later in the day Lauren and I needed a snack, so we had the BBQ wings from Dinosaur BBQ. 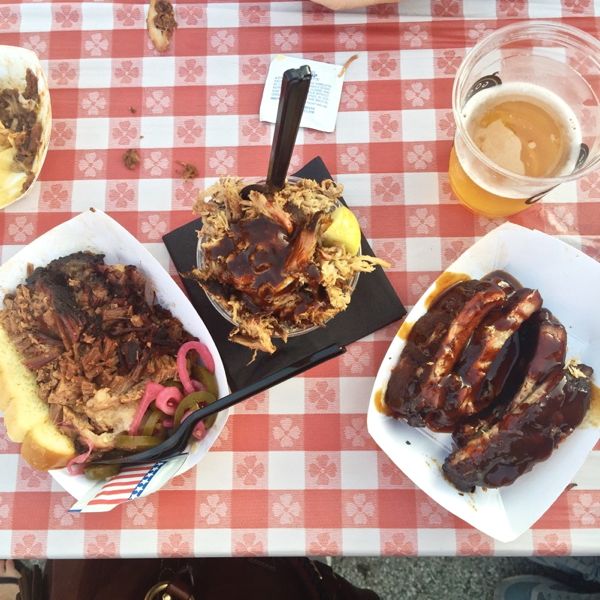 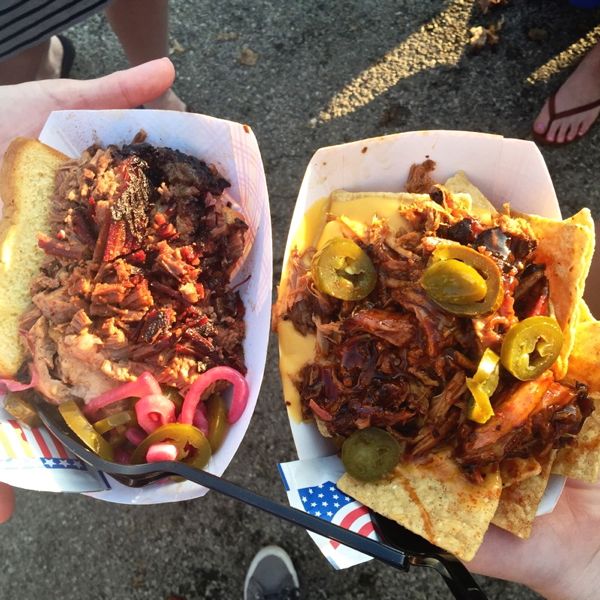 And, we needed another order of the nachos from Bub City. 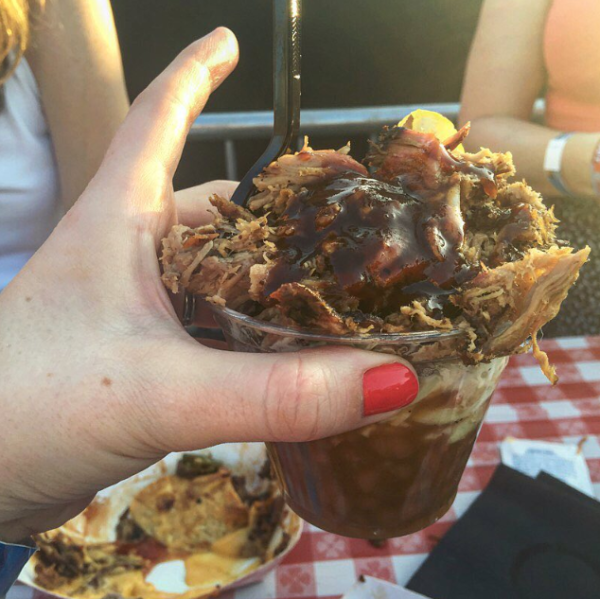 Chicago Q’s pulled pork bar-b-que sundae with baked beans and coleslaw was a crowd favorite. I loved how it was an entire meal in a cup. 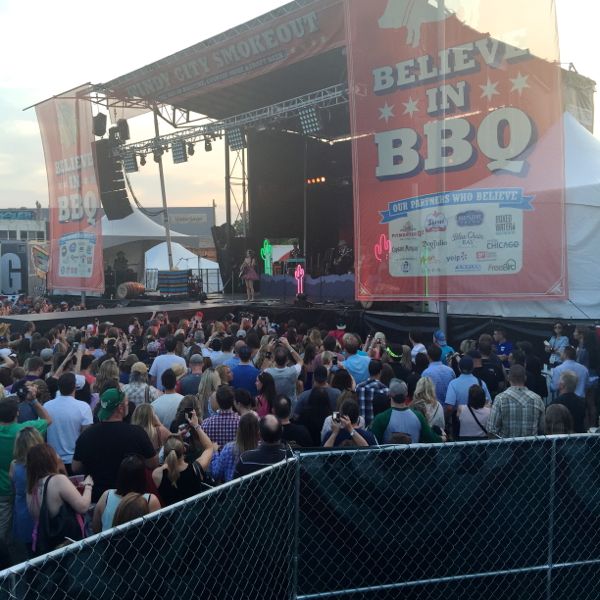 I need to mention how great the music was. I saw all the headliners, Kacey Musgraves on Friday, Chris Young on Saturday, and Lee Brice on Sunday. 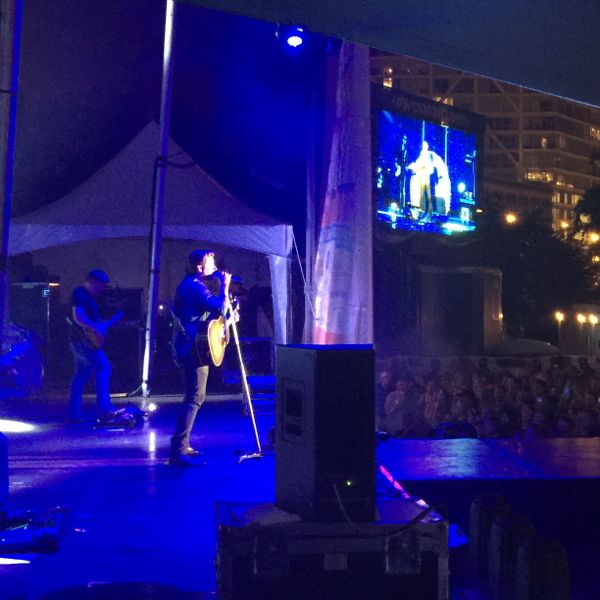 We got backstage for the Chris Young show. He sang the best cover of When You Say Nothing At All, and he seemed so genuinely excited to be at the Smokeout. 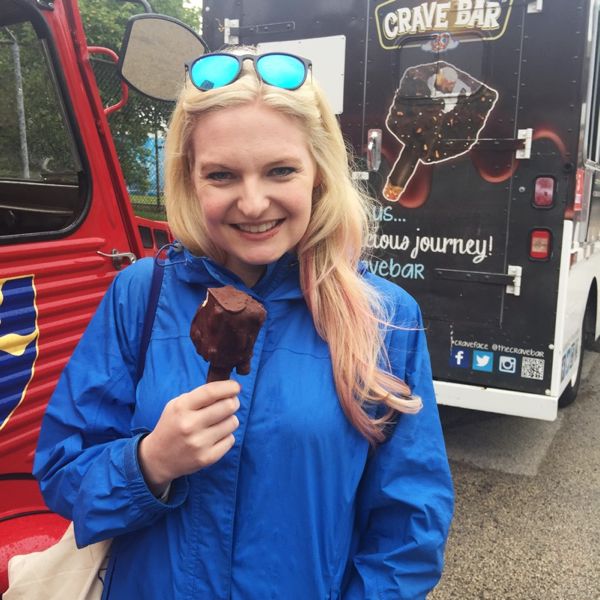 In summary, you need to go check out Bub City, Dinosaur BBQ, Chicago Q, Lillie’s Q, and Crave Bar. The Windy City Smokeout was such a fun weekend – and the weather kinda sorta cooperated too! I am already excited to go back next year. And on a side note… I dyed the bottom of my hair pink (well my girl Krista did it)! I thought it would be fun for festival season. (Mom, I promise this will wash out).

Thank you to Lettuce Entertain You for providing me with tickets.