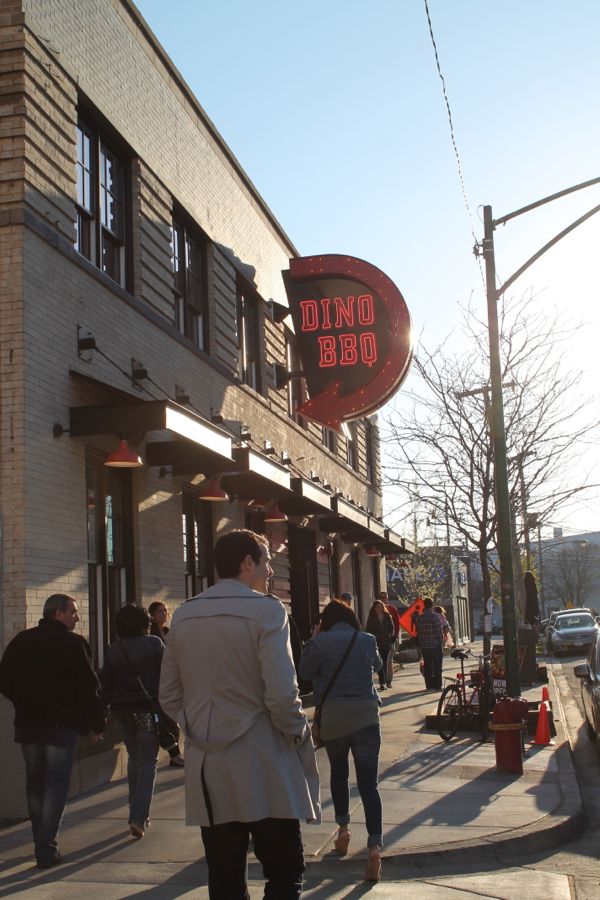 Before I moved to Chicago, I was a broke grad student studying art history and living in Harlem. I loved every minute. While Harlem was perhaps a more adventurous place to live (to put it nicely) there was one major advantage to living in the neighborhood: Dinosaur BBQ. Located under the elevated West Side Highway, in a somewhat seedy feeling part of Harlem, Dinosaur is a BBQ joint with a biker bar atmosphere and food so good that people wait 2 hours, and prices that even a student can afford. And, in case you haven’t heard, Dinosaur BBQ just arrived in Chicago. Eager to try Dinosaur in Chicago I joined friends for a Sunday dinner of beer and barbecue.

The Chicago Dinosaur BBQ is housed in a new building by the Kingsbury Whole Foods. Despite the newness and the sterile feel of that section of Chicago, the decor of restaurant is very similar to the one in Harlem. The space has simple rustic wooden tables. The space downstairs space is divided into a large bar area and a dining room. The big beer garden in the back will be the place to hang out once warmer weather arrives. 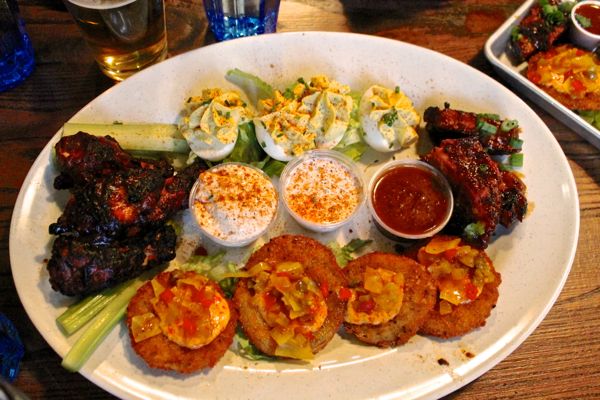 We kicked things off with the swag sampler plate which includes wings, deviled eggs, ribs, and fried green tomatoes. This is a great way to get a taste of a handful of different appetizers. The traditional deviled eggs were both delicious and completely on trend with them popping up on menus all over the place. The fried green tomatoes are served two ways, the traditional and the fancy. We opted for the fancy which are topped with pimento cheese and chow-chow, a Southern relish. 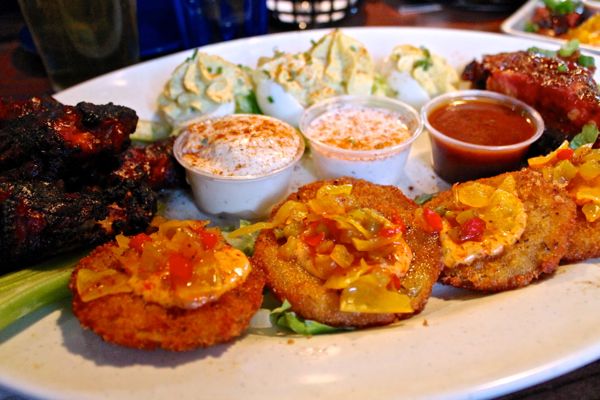 The wings are not to be missed. Dinosaur offers six different sauces with various flavors and spice levels. We ordered our wings with the Wango Tango sauce which was sweet and slightly spicy. The wings themselves are jump meaty wings. Dinosaur’s smoked ribs are fall off the bone tender, and it is nice that you can order them as an appetizer if you don’t want them as an entree. 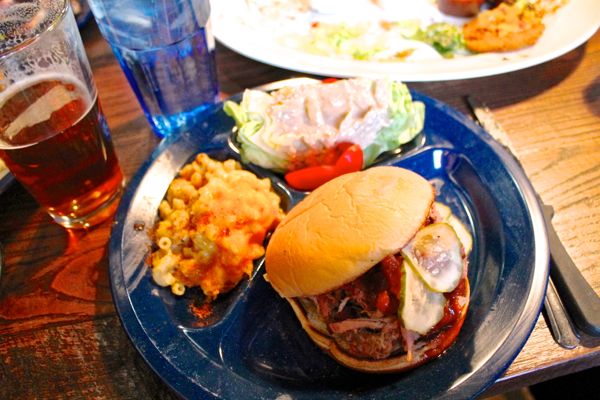 I knew what I was going to order before I even looked at the menu. The pulled pork sandwich with a side of macaroni and cheese and an iceberg lettuce wedge salad. The pulled pork is slowly smoked until it falls apart and you can add your choice of barbecue sauce. The iceberg wedge is simple, but the Bar-B-Blues dressing is a personal favorite. Dinosaur’s mac and cheese is legendary. The cheese sauce is thick and extra cheesy and it is seasoned with barbecue spice. This is something you absolutely must order. Although I didn’t order them, Dinosaur’s fries are deserving of a shout out. 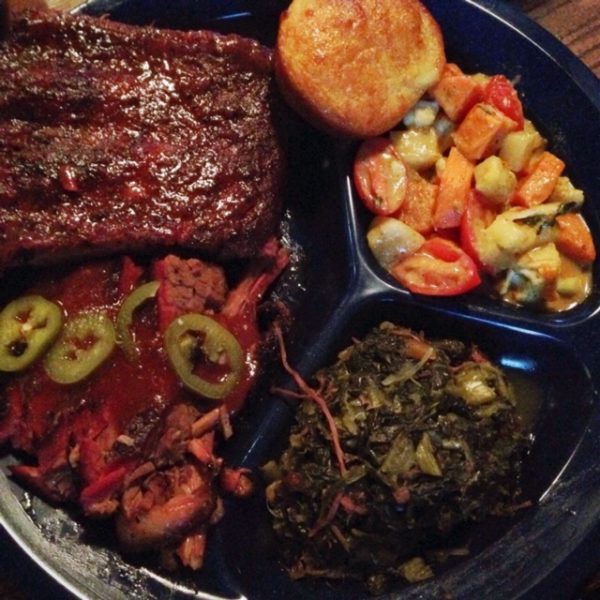 Charles ordered one of the combo platters with brisket and ribs. Charles raved about the brisket which was seasoned with a good amount of spice. According to Charles the rib are good, but not the best in town, he reserves that title for Green Street Smoked Meats.

Dinosaur has earned its place as one of the best barbecue joints in the city. It’s casual, family friendly, and the beer garden will certainly be a hit. The fact that they are one of the only bbq places that takes reservations is a huge plus. Overall, the Chicago menu includes all of the classics from the Harlem menu, with some fun new additions. 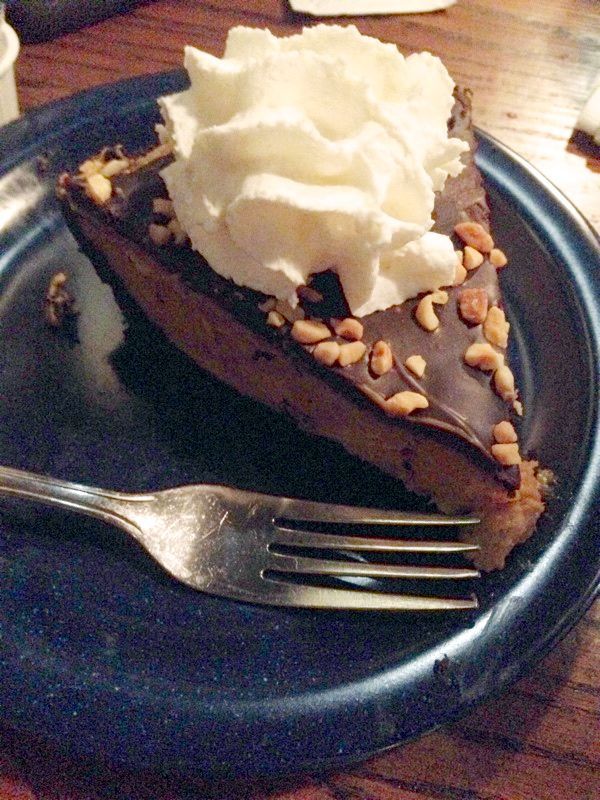 I had never in my life managed to save room for dessert at Dinosaur, but somehow I managed it. And I am very glad that I did. The peanut butter pie was absolutely phenomenal. It has a oreo crust, a light fluffy peanut butter filling, and it topped with a thick chocolate ganache and whipped cream. 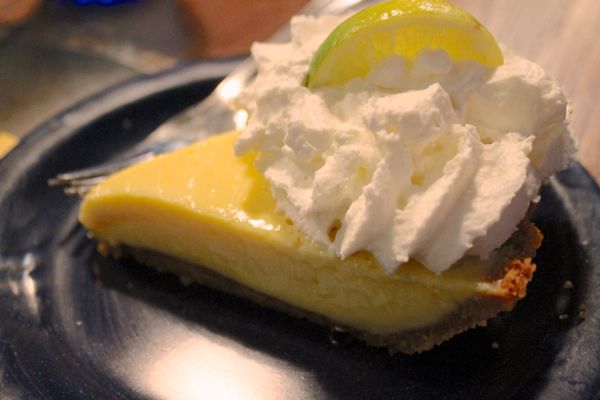 We also tried the key lime pie, which was very good, but the peanut butter pie stole the spotlight.

Dinosaur BBQ is located at 923 Weed Street, and by some miracle, they do accept reservations. They have a gluten free menu and a kid’s menu too.

I've heard they have some pretty good BBQ but haven't been there yet. Maybe this summer when I head up to Wisconsin!