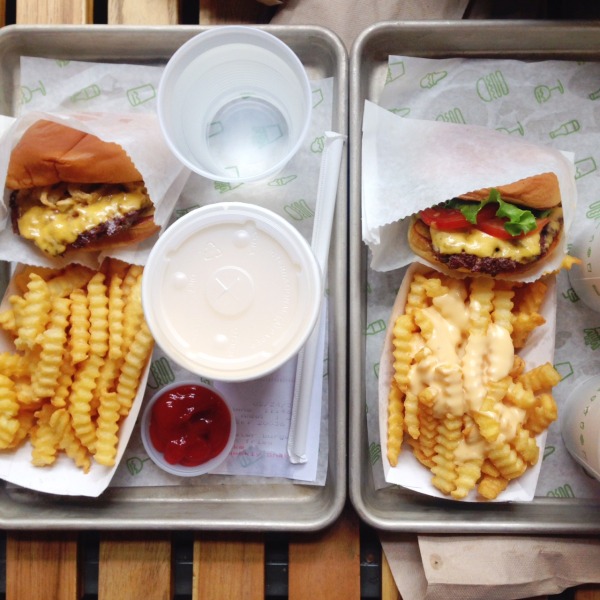 I am slightly embarrassed that it took me to long to make it to the freshly opened Shake Shack in Chicago’s River North. While the doors opened at the end of 2014, I didn’t find time to visit until the day before we left for Puerto Rico. Eating $18 of burgers, cheese fries, and shakes is something only I would do before a beach vacation. If the food wasn’t so darn good I might have regretted that decision, but of course Shake Shack is a culinary experience that I could never regret.
My coworker Anna and I ventured off campus for lunch one Tuesday. We work in a little corner of Chicago without many lunch options, but sometimes we take a cab and go somewhere fun for lunch. We strategically made the decision to take an early lunch at 11:30 so we could beat the rush. The plan was a success, by the time we chose what we wanted it was time to order.
While Shake Shack’s menu sticks to the classics: burgers, fries, shakes – I had trouble choosing what to order. I had been to Shake Shack a couple of times when I lived in New York, and I feel hard for their vegetarian burger option: a portabella mushroom, stuffed with cheese, that’s battered and deep fried. I didn’t eat red meat when I lived in New York – so that was my go-to. This time I tried the classic burger, the Shack Burger. Burgers are available in singles or doubles; I got a single so I could also have room for cheese fries and a vanilla shake.
Anna ordered fries, the special the Shackmeister burger which is basically the Shack Burger with the addition of fried shallots. She prefers regular fries to the cheese fries – and judging by the comments on Instagram the cheese sauce is the topic of some debate. I thoroughly enjoyed it, but some people don’t. In addition to the standard shakes on the menu, Shake Shack has a rotating shake special that tends to be a bit more creative – recent flavors include Boston Cream Pie and Coconut Dulce De Leche. 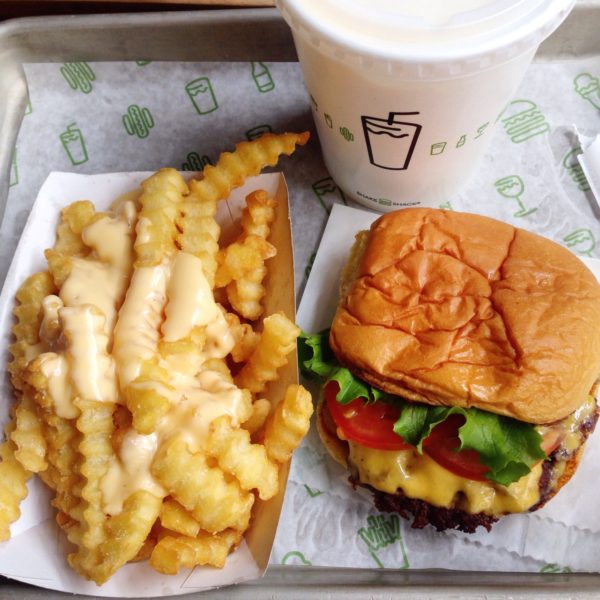 I posted a photo of my lunch on Instagram, and it quickly became my most liked photo ever. I loved seeing what people had to say in the comments. There was discussion that the cheese sauce on the fries should be replaced with queso – definitely a solid idea. Someone else asked if I worry about gaining weight when I eat like that. Yes. Absolutely. I was so full from all the food I only had a small snack for dinner.
I showed Charles the Instagram photo and the response to it. He hasn’t been to Shake Shack yet and doesn’t get what all the fuss is about. He wanted to know why everyone loves this place so much. The first thing I said was, “They have CHEESE FRIES, and they are perfectly salted!” He looked at me like I was crazy. Then I tried to put my finger on what makes Shake Shack so good. Part of it is that everything on the menu is great. The burgers are juicy and freshly cooked and the shake sauce that tops them is a bit of magic, The burgers don’t have pickles, and I think that is a big plus. The fries are crinkle cut and I am no scientist but I think that the shape of a crinkle cut fry makes them crispier. The shakes live up to the hype. While we were in line a man behind us was debating whether to order a shake or not, his friend insisted that the shakes were the best he had ever had.
Perhaps the bottom line is that Shake Shack offers classic American fast food at its very best. It’s fresh, not greasy, and the atmosphere is welcoming and pleasant. There is even a patio that will be open when Chicago emerges from the deep freeze.
How does Shake Shack stack up against its competition? You might remember that I have been trying lots of burger’s lately: Umami Burger, Au Cheval, Chicken Shop, Chop Shop – I tried them all. Nothing can dethrone Au Cheval, the absolute best burger I have had in my life. Although I haven’t written a review of Longman & Eagle, their burger earns second place. Shake Shack’s burger comes in third place. These top there burgers are quite different, as are the restaurants themselves. One thing that sets Shake Shack apart is that it has a shorter wait time ad less expensive burgers.
Shake Shack is located at 66 East Ohio Street in River North. They do not accept reservations.
I would love to read some friendly debate on what you think the top three burgers in Chicago are in the comments.