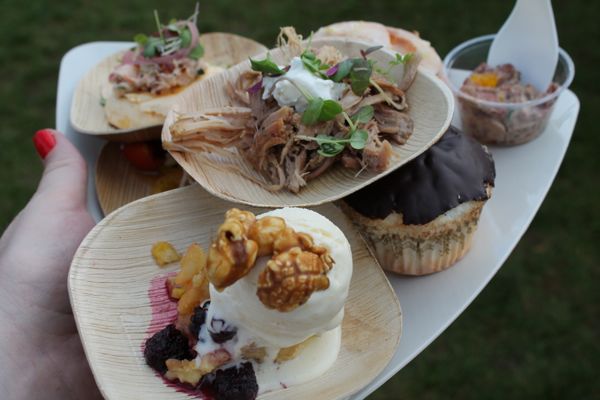 See that plate? That stacking is advanced stuff.

I am still thinking about how much fun I had at Chicago Gourmet this year. The two day event is a chance to try bites from dozens of Chicago’s top restaurants all in one day. What were my favorite parts of the event on Saturday?

1. The Grand Cru – this James Beard themed event gave me access to some of the best Chefs in the country, along with tastings from some of the worlds best wine makers. 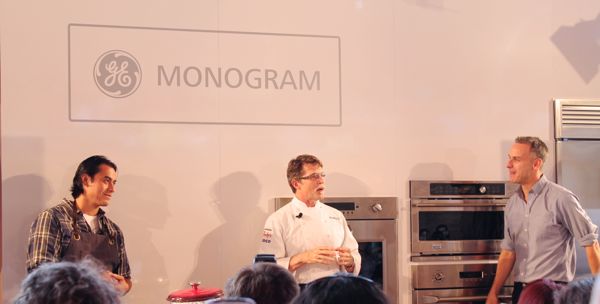 2. The Mexican Takeover demo featuring Chef Rick Bayless of Frontera Grill/Topolobampo/Xoco and Chef Carlos Gaytan of Mexique – it was clear that the chefs were having a blast and they were a joy to watch. Each chef prepared a “quick fire” style dish in just 20 minutes, and the shared cooking tips and tricks throughout. Chef Bayless won Top Chef Masters in 2009, and he admitted that the moment when challenges are revealed are some of the scariest moments of his life. He said that often they are given ingredients that they have never worked with before, and that he has to follow this instincts and taste the dish many times along the way. He also sang the praises of Vitamix calling it the kitchen tool that he just can’t live without since it is so heavy duty it is perfect for preparing Mexican sauces. 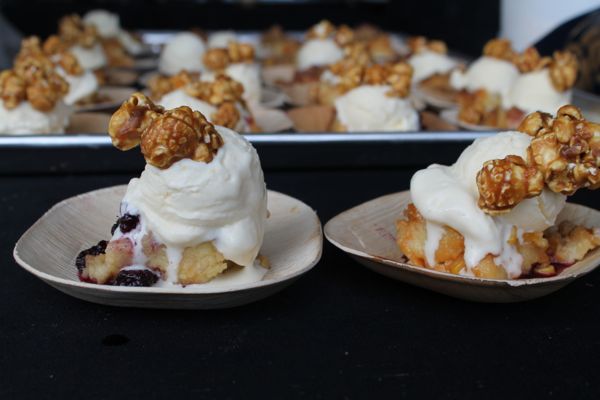 3. The corn, blackberry, and caramel corn bread pudding prepared by Francesca’s restaurants – as my friend pointed out, you could taste all the flavor notes clearly, and corn added a nice texture. This dish was creative without being over to top. I also really appreciated being able to grab a dessert without waiting in the line for the dessert pavilion. 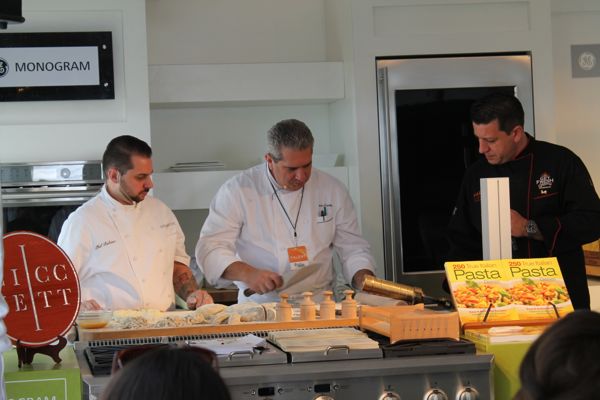 4. Handmade Pasta 101 with Phil Rubino of Cicchetti and John Coletta of Quartino – this was a fun session that broke pasta making down into easy to understand instructions. 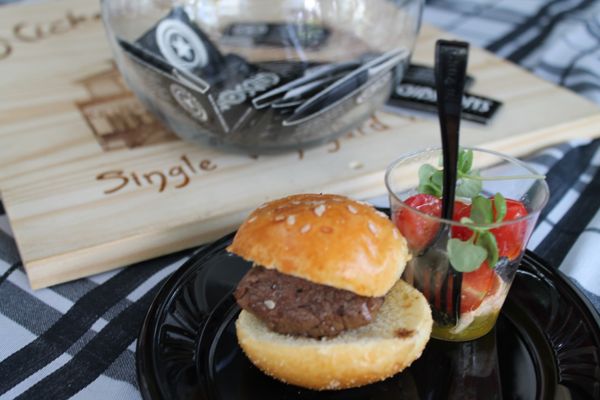 5. The filet slider from Gibson’s – I had many sliders at Chicago Gourmet, and this was my favorite. Bonus points for the caprese salad on the side. There is an aggressive amount of protein served at Chicago Gourmet, so any opportunity for vegetables was welcomed. 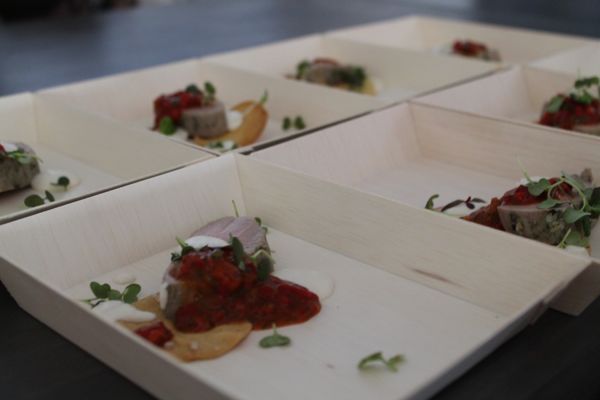 6. The Salt Roasted Sirloin prepared by Chef Jimmy Bannos Jr. of The Purple Pig – this was just so different than anything I have ever tried and I was surprised at how tender the sirloin was. The flavors of the piquillo pepper and tropea onion jam and horseradish crema worked well together and didn’t compete against each other. 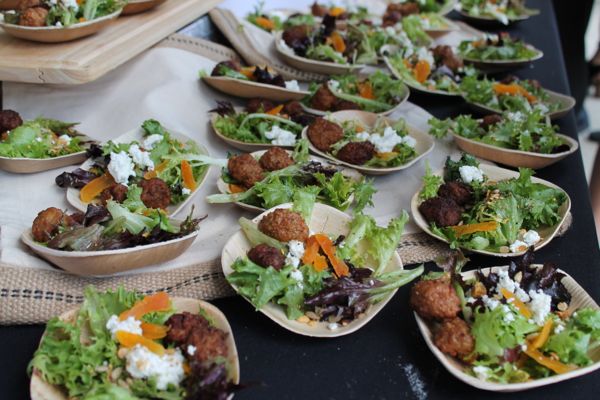 7. The bacon jalapeno meatballs at the Foodfanatics tent – I was really happy that these delightful meatballs were paired with a salad after chowing down on several sliders at other tents. This is an example of a fun, but relatively fuss-free Chicago Gourmet dish, and I think it was a success. Some of the restaurants can go a little overboard. 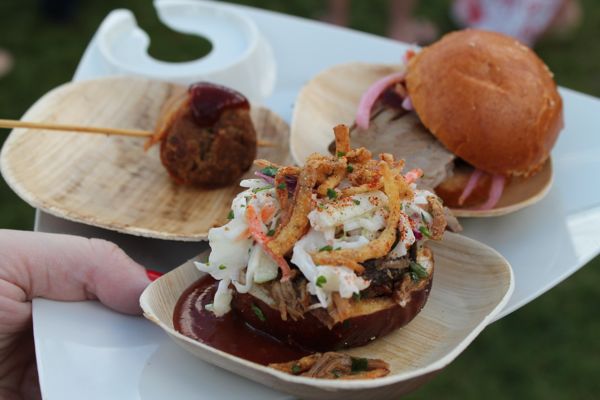 8. The BBQ Pavilion – yes, the line was long, but worth it. I especially loved the brisket from Old Crow Smokehouse. 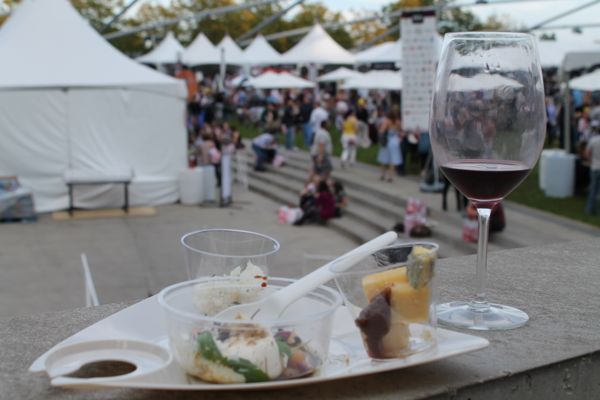 9. The burrata salad with stonefruit, basil, and Saba from Davanti Enoteca – because burrata is the best. I thought that the fruit pairing was a nice sweet and salty flavor combination. 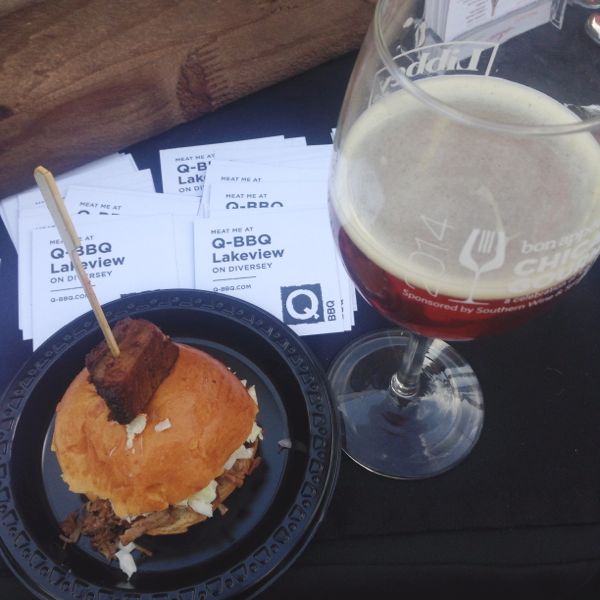 10. The pairing of the pulled pork slider from Q BQQ and Goose Island’s Oktoberfest – I started the day off with a couple of beers, and then several men proceeded to come up to me asking where I got it. I think that beer is the best thirst quencher on a warm day, plus, the beer pours offer a much bigger portion that the wine pours.

Chicago Gourmet is a truly magical weekend of food, and I am sad that it is over. If you are considering a trip to the Windy City, you just might want to plan it around Chicago Gourmet.

I attended Chicago Gourmet with a media pass. The opinions expressed are my own.