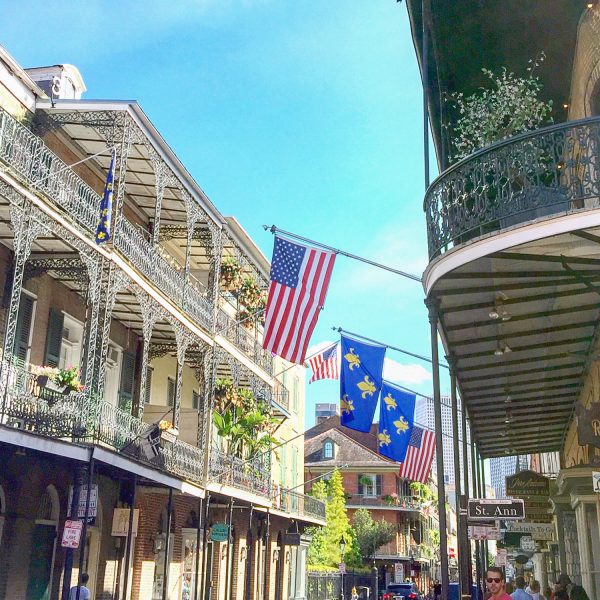 Charles and I have a tradition of going away for the Fourth of July long weekend to celebrate our wedding anniversary. We spent our first anniversary in Boston, and the following anniversaries in Charleston, Kohler, and London. This year I booked a last minute trip to New Orleans. It was my first trip to the city, and I needed some help deciding what to do in New Orleans, so I reached out to a former classmate who lives in the city. She gave an extensive list of what to see, do, eat, and what to avoid. It was an incredibly helpful resource that let me explore the city more like a local. 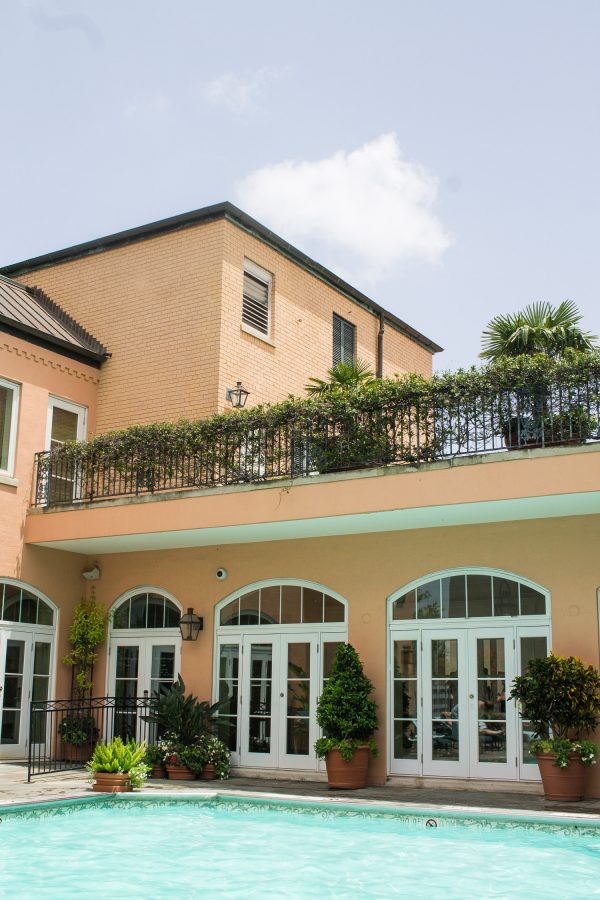 We stayed at Hotel Monteleone, a historic hotel just 2 blocks from Bourbon Street. The hotel is home to the famed Carousel Bar, and it is well equipped with amenities including a spa and a rooftop pool. 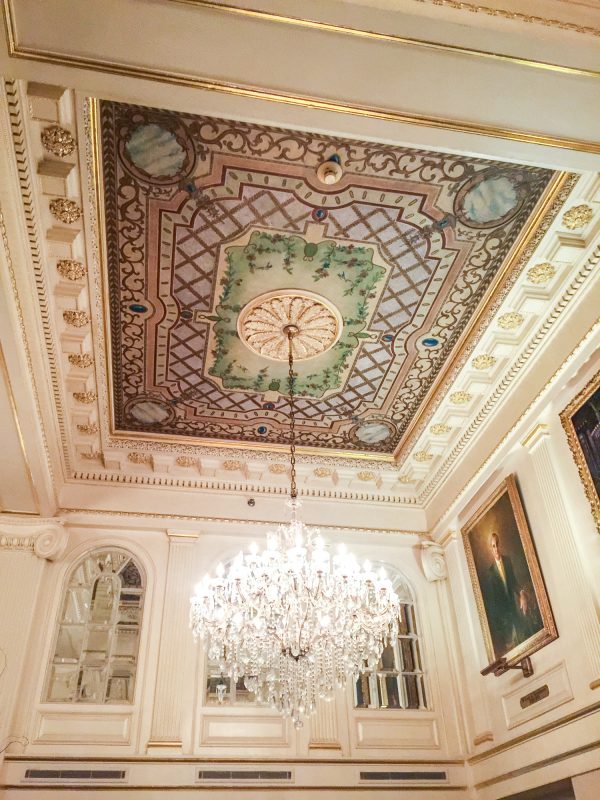 The thing that surprised me is that it was one of the quietest hotels I have ever stayed in. The hallways branch off in a way that separates guest rooms from the long main hallway. It’s genius. I had spent the previous weekend in a hotel in Indianapolis and found myself woken up by drunken partiers in the middle of the night and running children followed by scolding parents in the mornings. I didn’t hear a peep at Hotel Monteleone. 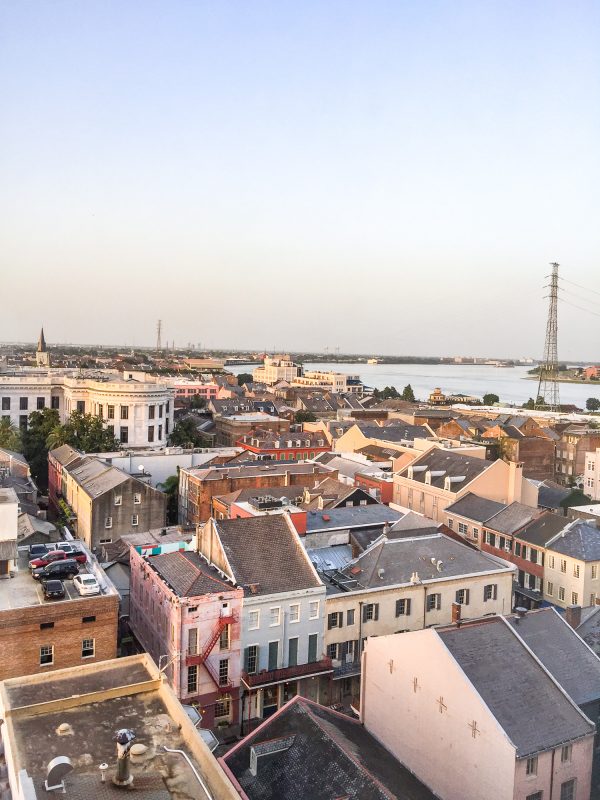 And we loved the view of the city from our room. 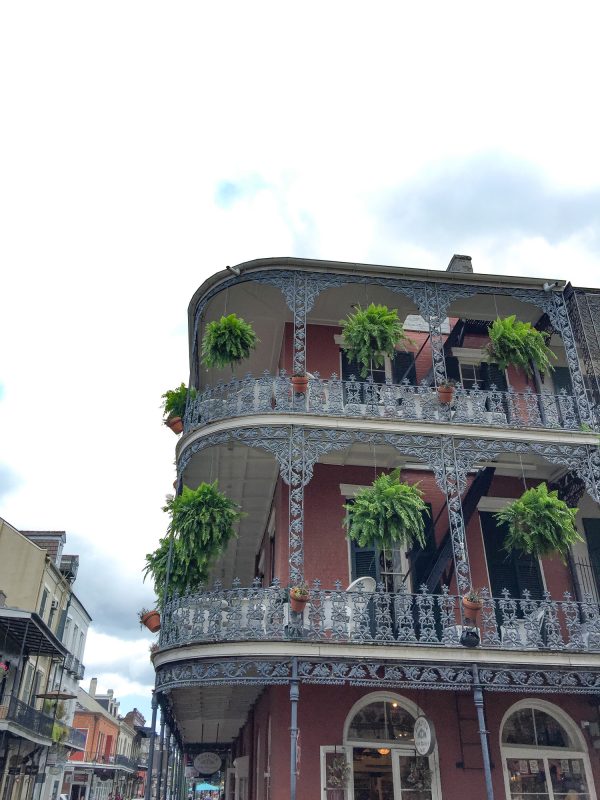 The hotel’s location in the French Quarter proved to be the perfect starting point for exploring the city. 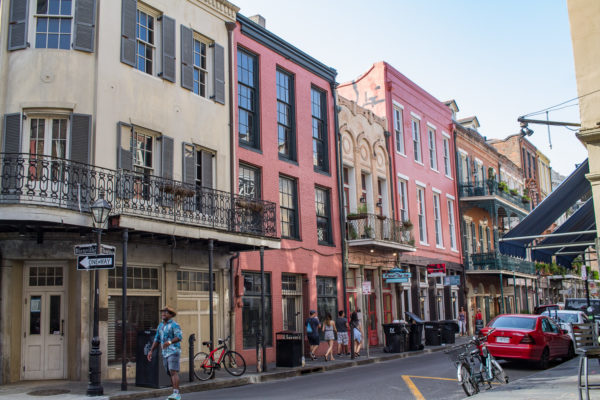 We didn’t take any ubers or cabs since we were able to walk nearly everywhere. The streetcars were ideal for going longer distances. 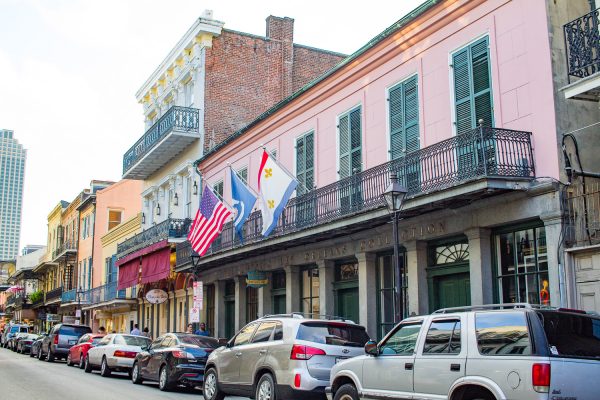 The French Quarter is so charming that it feels like a movie set. I loved just wandering around admiring the architecture. 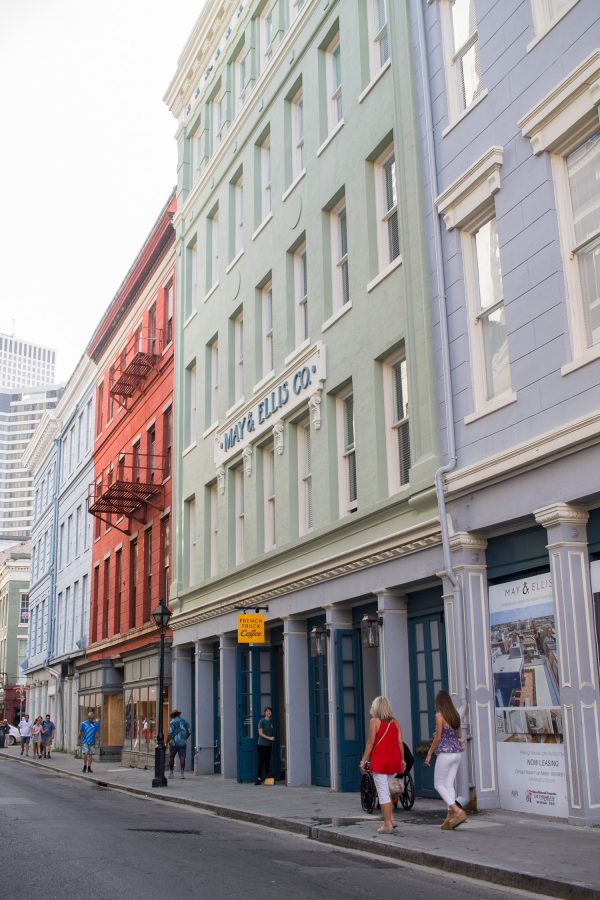 It made me want to grab some paint and paint Chicago’s buildings some more cheerful colors! 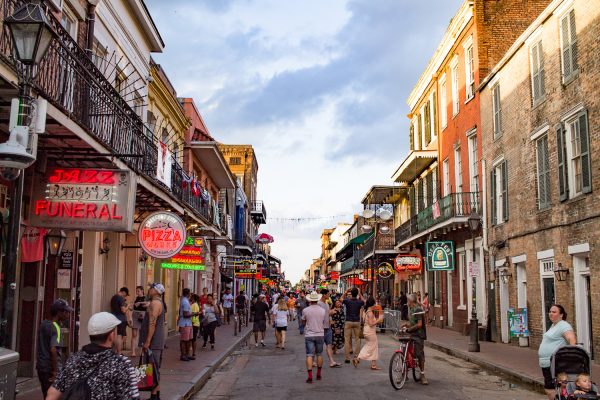 Bourbon Street is famous for being the place to party. It’s crowded, loud, and not particularly sophisticated. There are lots of strip clubs, and bars sell beads so that people can entice women to flash them. It’s definitely not kid-friendly. We stopped into a bar for beers just after arriving in the city because we wanted to people watch and see what it is all about. If you want to do Bourbon Street, you definitely need to have a plan. My friend advised me that there were only a couple of places she would recommend, including Pat O’Brien’s, Jean Lafitte’s Blacksmith Shop, and Old Absinthe House. 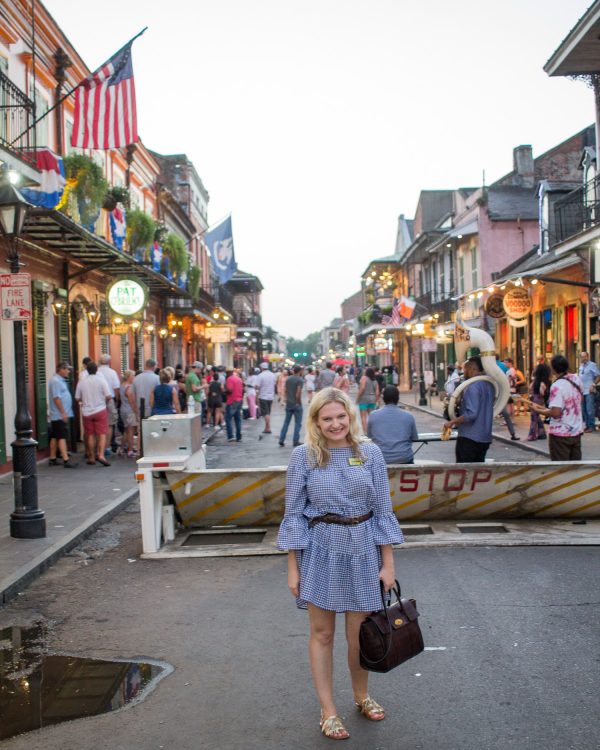 My friend had recommended going on a ghost tour of the city, but when I saw a company offering Haunted Pub Crawls I figured that a ghost tour would be more fun if I had a drink in my hand. And since New Orleans doesn’t have laws stopping you from drinking in the streets we could take our drinks with us as we walked from place to place. 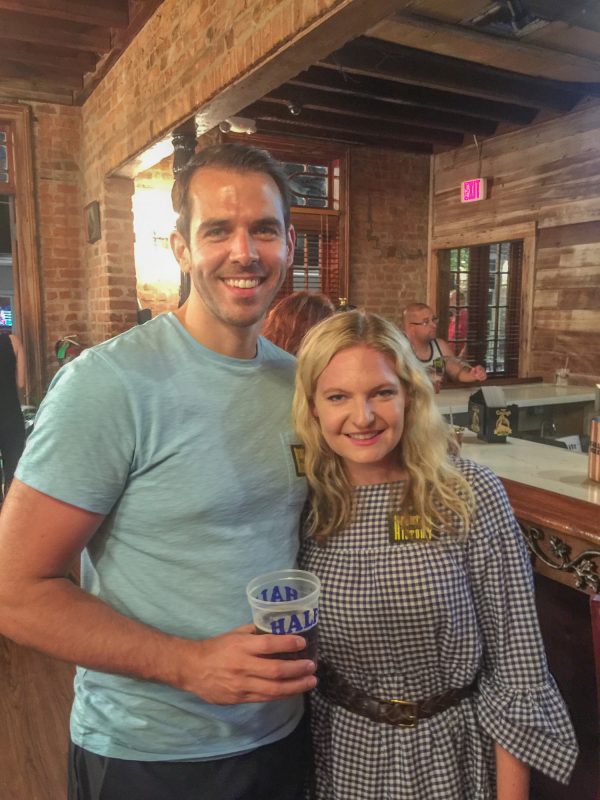 The tour was run by Haunted History Tours and we stopped in three haunted pubs and visited other haunted spots along the way. The guide did a great job mixing New Orleans history with tales of ghosts. We learned about the fire that destroyed most of the city, how yellow fever killed many, and why graves are above ground. They also worked in some stories that inspired American Horror Story: Coven. The ghost stories were plentiful, and some were deeply creepy. 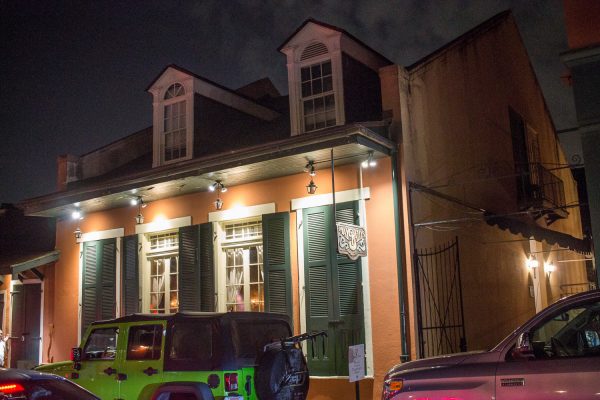 This former brothel turned bar is haunted by several ghosts, and bar patrons have reported having their shoulders rubbed while they are in the bathroom. I refused to use the bathroom and waited until we got to the next bar. 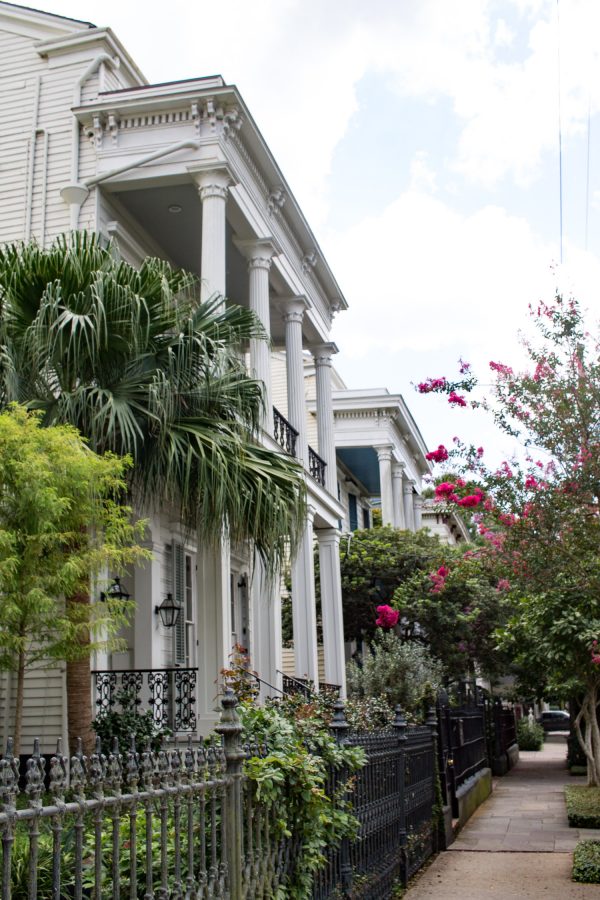 On our second day in New Orleans, we took a streetcar to the Garden District. The way the wind came through the windows as the streetcar scurried away from downtown provided relief from the humid 85-degree weather. The tour starts at an independent bookshop with a wide section of books by local authors. There is a little coffee shop across the hall, and I very highly recommend getting an iced drink to bring with you on the tour. It was hot outside and having a cool drink was very refreshing – get the lemonade slushy mixed with iced tea – it was so good that we are seriously debating devoting precious kitchen counter space to a slushy machine. 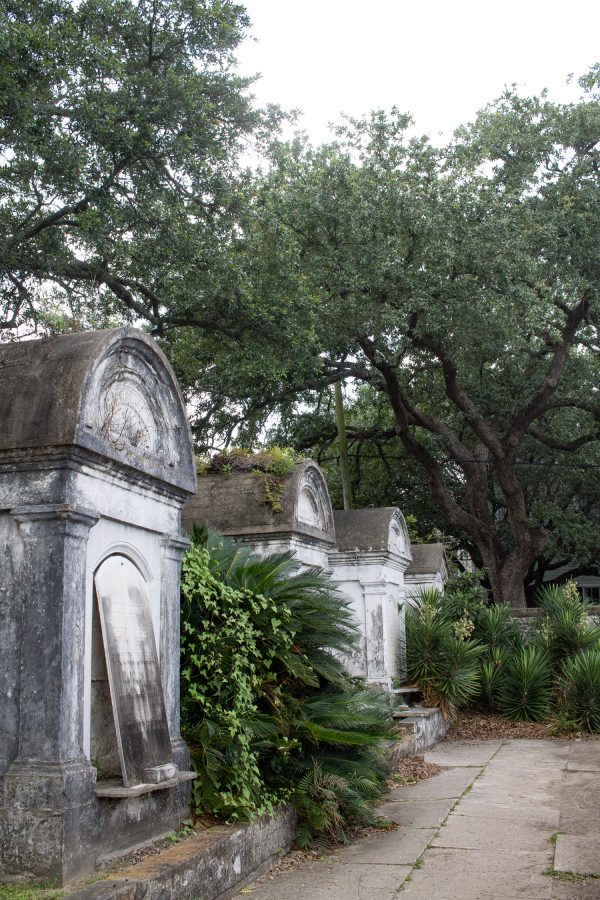 The walking tour lasted for 2 hours, and it started with a tour of the Lafayette Cemetery #1. In New Orleans, a specific method of burying the dead had to be developed since the wet ground meant that coffins would float up above the soil over time. Attempts to solve the problem by laying a thin layer of cement over graves resulted in the coffins knocking against the cement. Using above ground family tombs was the best solution. 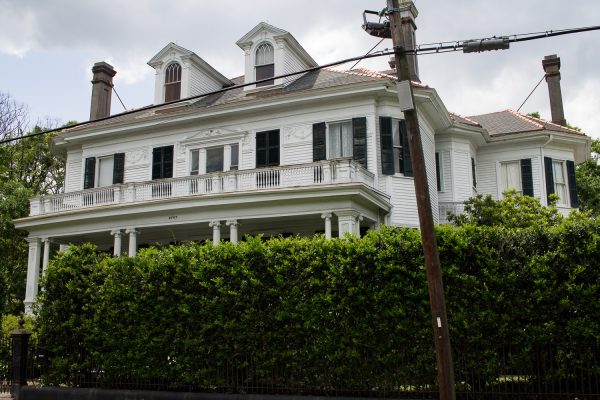 After a walk through the cemetery, we went to admire the mansions of the Garden District. We stopped to see the home that was used in Benjamin Button (pictured above), along with homes owned by Sandra Bullock, Anne Rice, and John Goodman. 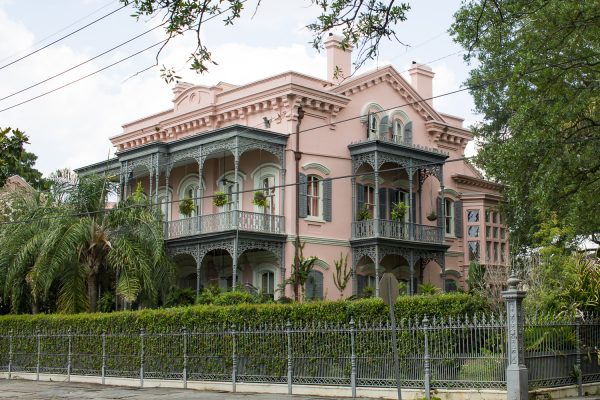 Many of the homes still have their original iron gates. This home is for sale for about $4M. 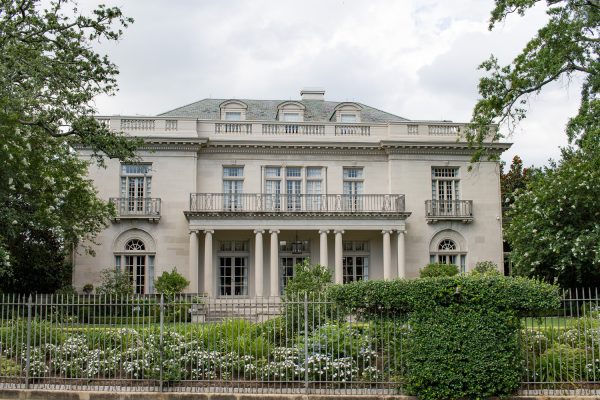 Once the tour ended we got back on the streetcar and continued onward to see even more gorgeous homes along with parts of the Loyola and Tulane campuses. 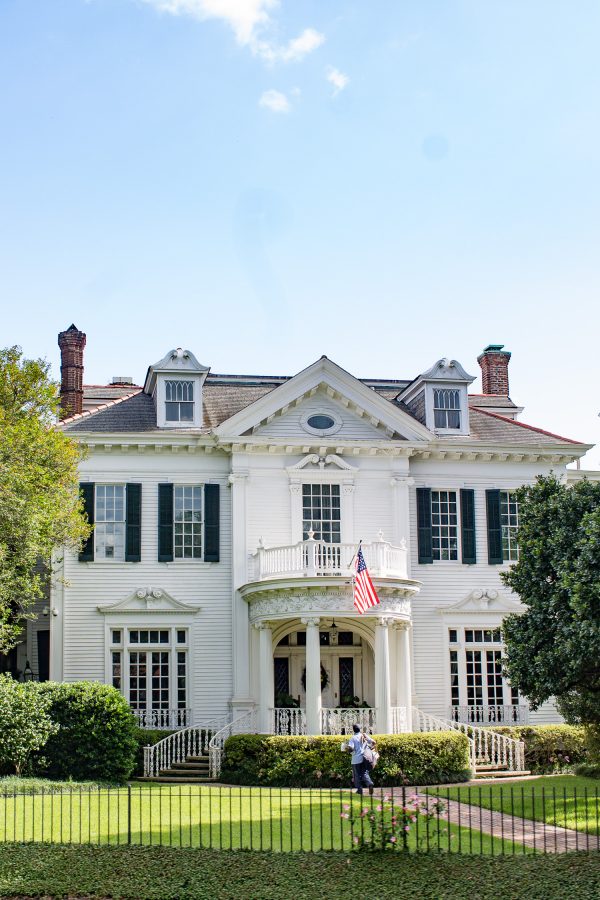 This home was one of my favorites. 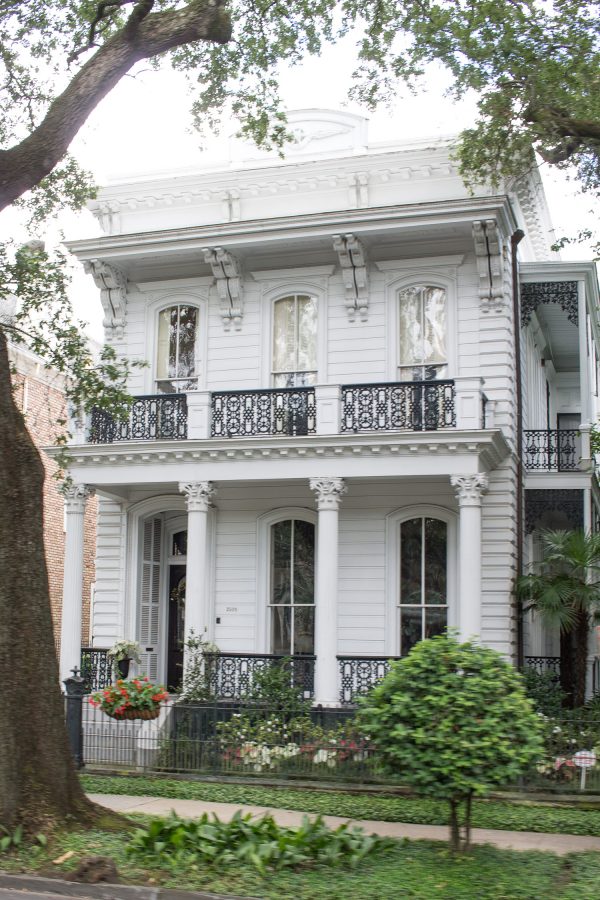 The streetcar makes a loop, so after about a 20-minute ride it took us right back to where we had started in the French Quarter. 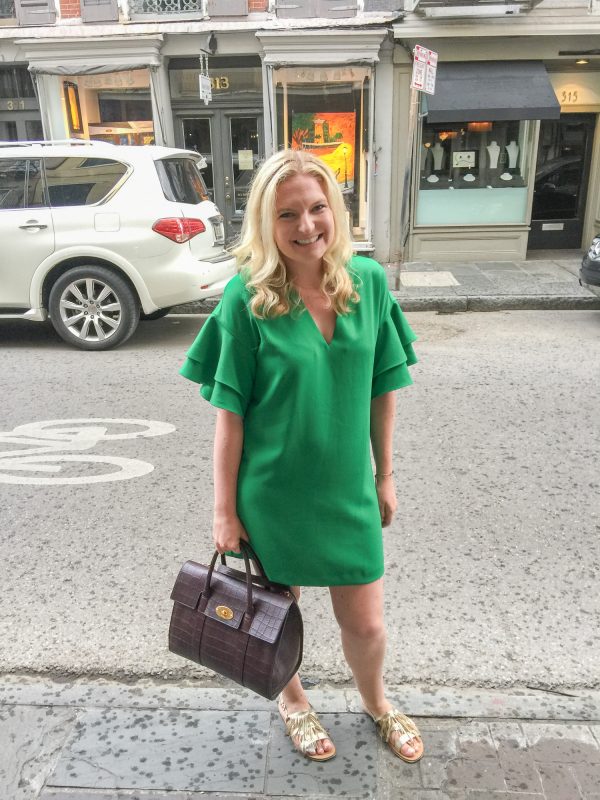 On our third and final day in New Orleans, we went to explore the Jackson Square area. We had brunch and made a stop at Cafe du Monde before getting our palms read in the square. It’s a silly thing to do, but it is part of the New Orleans experience. Several palm readers were lined up in the square ready to share insight on your future. I thought that they told me and Charles very similar things, but it was still fun. 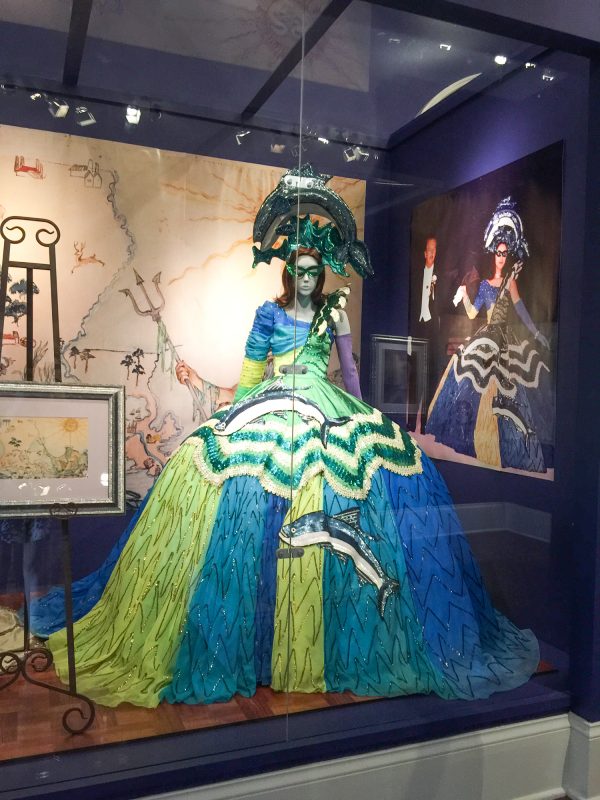 We had wanted to go to the New Orleans Historical Collection, but it was closed for the Independence Day holiday. The Presbytere next door was open. This museum currently has exhibits on Hurricane Katrina and Mardi Gras. It’s an interesting pairing, but after the somber Katrina exhibit the Mardi Gras exhibit cheers you up. I was studying abroad when Katrina happened so I didn’t know that much about it. The exhibit is well put together with lots of video footage of the storm, a small room that recreates the sights and sounds of a hurricane being outside, and artifacts from the storm. The Mardi Gras exhibit includes a float from the parade along with lavish parade and ball costumes. It was fun to get a sense of what Mardi Gras is like.

Next, we quickly stopped by the French Market, an open-air market that has been in existence since 1791. There is a mix of vendors selling food and various goods. The restaurants looked good, but the items for sale at the market were pretty touristy. 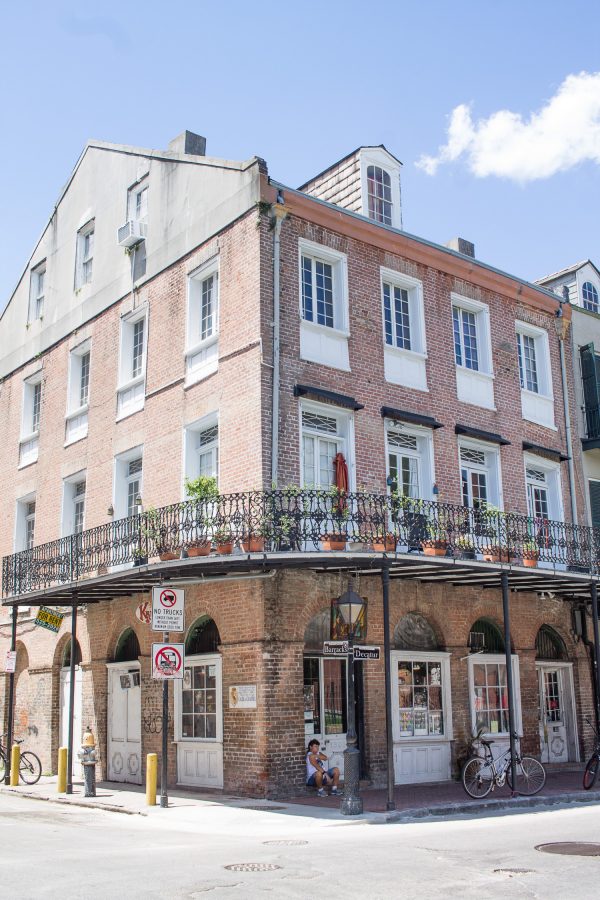 Charles wanted to wander Frenchman Street on our last afternoon in New Orleans. We wandered into Bamboula’s, a restaurant with live music in space that was once printing shop.  There was a band playing so we stopped to drink a round of beers and listen. Then we made a quick stop at Dat Dog (more on that later) before going to Brieux Carré Brewing Co. 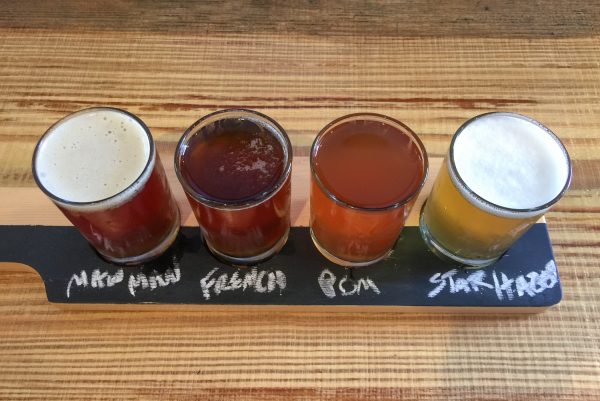 Brieux Carré Brewing Co. is a small brewery with a tasting room and a beer garden. Their beers have awesomely creative names like Pomeranian Fight Club and Bagpipes at Midnight. I grabbed a tasting flight and enjoyed my last few hours in Nola. 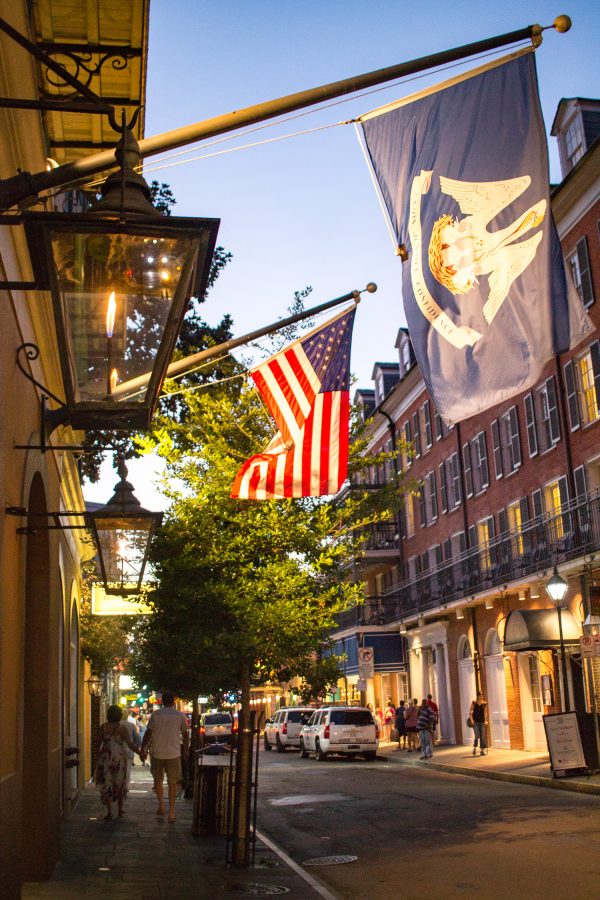 The one thing that I really wanted to do that we didn’t have time for was exploring Magazine Street. Do you think we missed anything else? Let me know in the comments – I would love recommendations for a future trip to New Orleans.

Next week I will tell you all about where to eat in New Orleans.