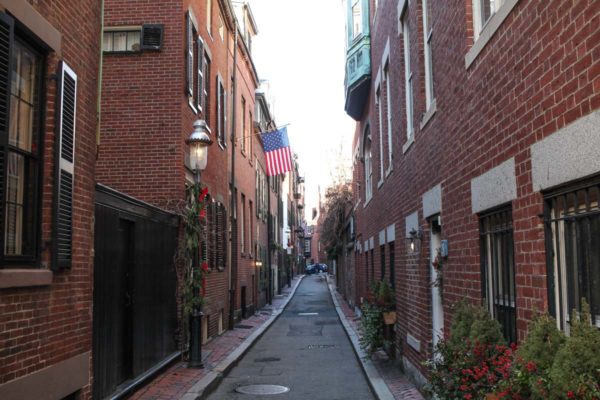 Charles says that I am bad luck. The only time his flights are delayed or canceled is when I am with him. It doesn’t help that Chicago and New England are notorious for having challenging weather. So I wasn’t too surprised when our flight home to Chicago after Christmas was canceled. The problem was that we had already driven from Maine to Boston when we learned of the cancellation, and we couldn’t get on another flight for 26 hours. So we made the most out of the situation, booked a hotel in downtown Boston and went to some of my favorite spots in the city. 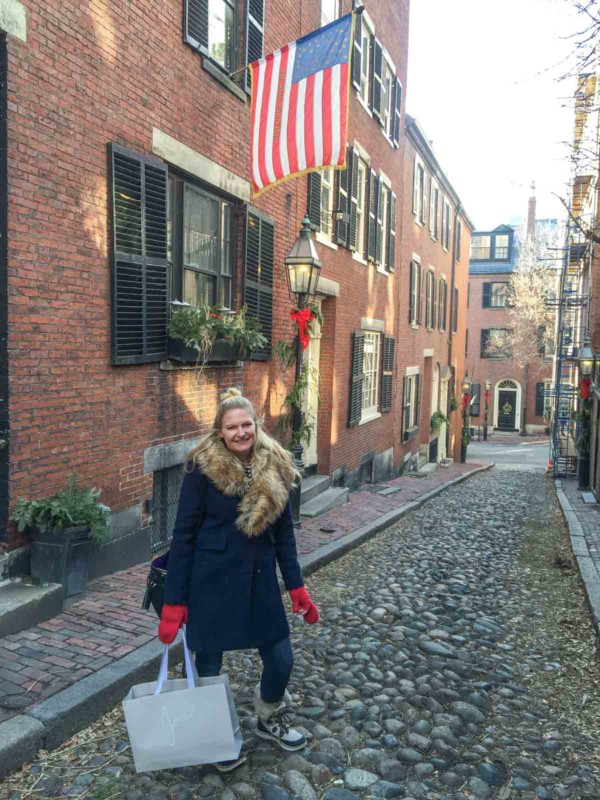 When you grow up in Southern Maine, Boston is “the city”. It’s where you go on annual school field trips and special outings with family. So although I never lived in Boston, I’ve spent a lot of time there. Boston is a great place for adults to have a relaxing and romantic trip, but it also has tons of family friendly activities. Boston is one of America’s oldest cities and there is so much to explore, if you haven’t been yet, add it to your list.
Where To Stay
Charles and I have taken several side trips to Boston, and each time we have stayed in a few different hotels. Our favorite hotel is the Liberty Hotel, which is a luxury hotel housed in a former prison. Even if you don’t stay there, check out Alibi – the bar in the former drunk tank which is decorated with celebrity mug shots.

Most recently we stayed at the Kimpton Onyx Hotel, which is just a couple of blocks from Boston Garden (apparently it’s TD Garden now). We grabbed a same-day hotel reservation via Expedia for $102 – and the hotel is just a quick walk away from the North-End. They also offer bicycles to hotel guests.

In the summer it is fun to stay at The Colonnade Hotel which has a rooftop pool. The Colonnade is next to the Prudential Center (which now has an Eataly) and close to Copley Square.

The Revere Hotel is a chic modern hotel close to Boston Common and it has a rooftop pool and lounge area. It’s well located and affordable. 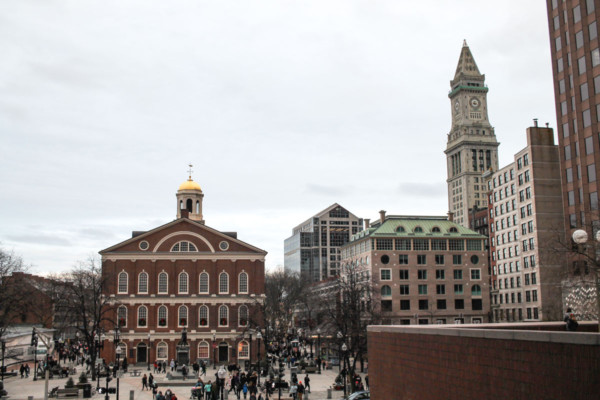 The number one thing to do in Boston is to walk the Freedom Trail, which is a 2.5 mile marked walking path that connects many of Boston’s historical sites. It might be impossible to visit Boston and not come across the Freedom Trail. It is marked with either red paint or bricks, and it cleverly prevents tourists from getting lost. You can join a tour or follow the trail on your own. 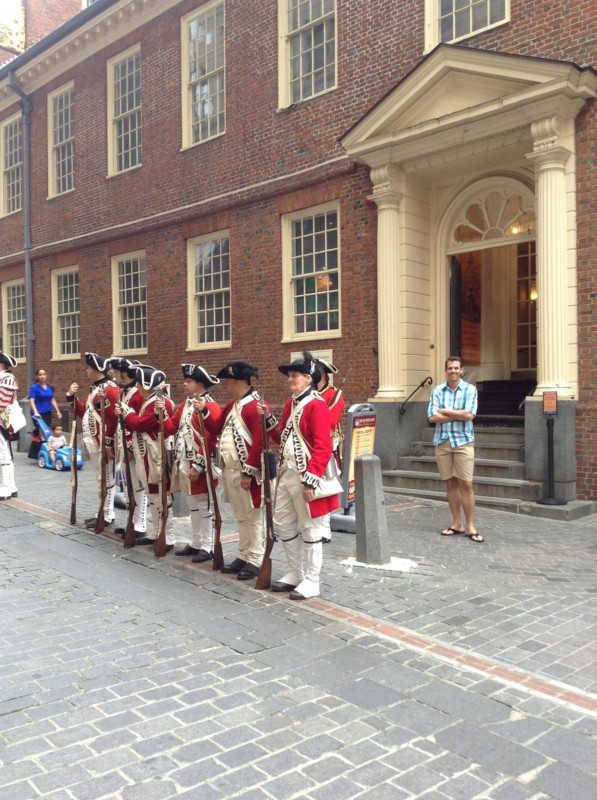 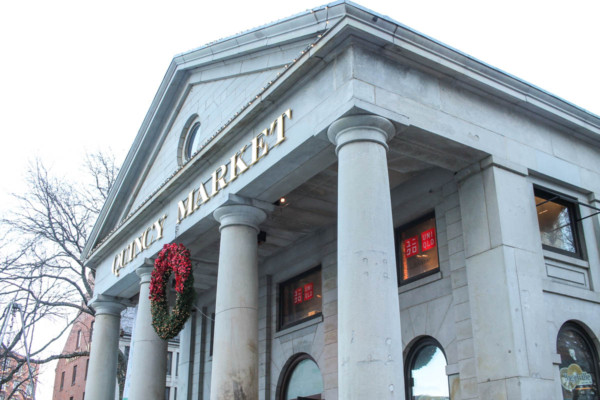 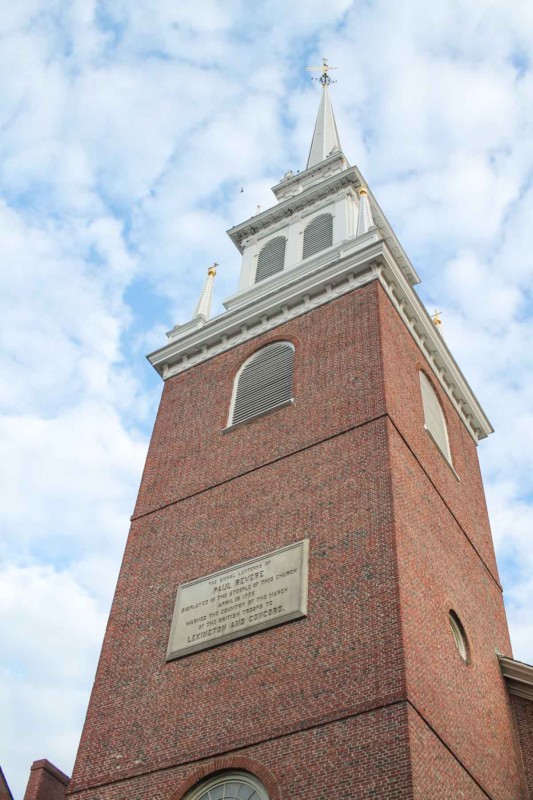 Old North Church is the church where Paul Revere hung two lanterns to signal at the British were coming by sea. 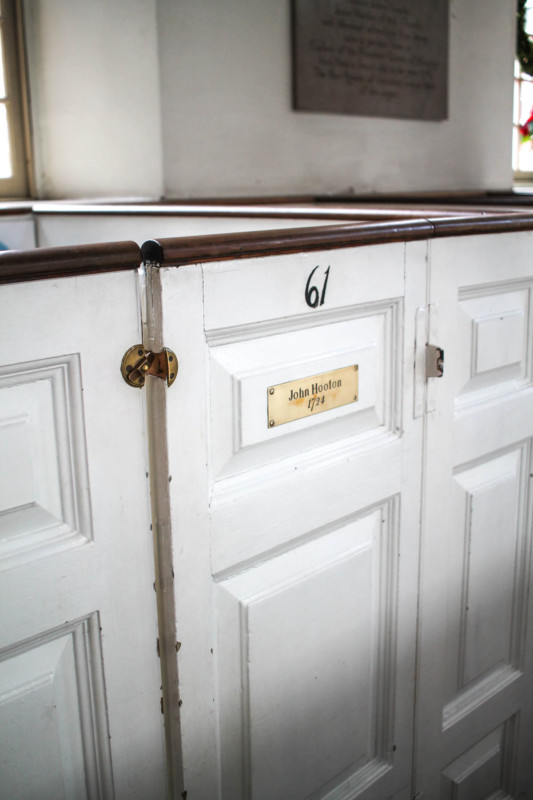 The church is the oldest church in Boston, and it holds such an important place in American history.

If you are traveling with kids, check out the Boston Children’s Museum, the Aquarium, and the Boston Museum of Science. My childhood memories are filled with visits to these places and they are fantastic. The Mugar Omni Theater at the Museum of Science has an IMAX dome which gives the films more of a virtual reality experience. 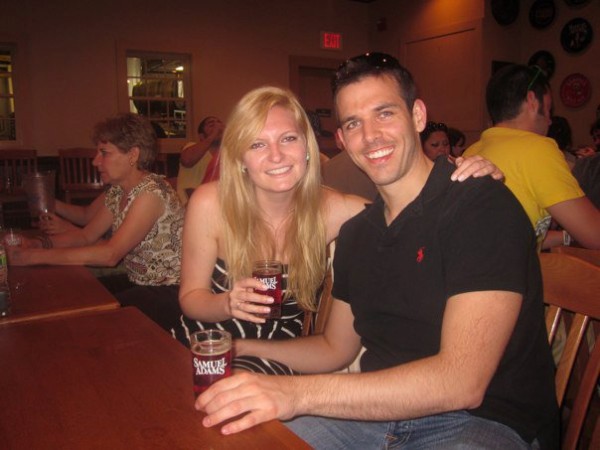 If you aren’t traveling with kids, you need to visit one of the breweries in Boston. Both Harpoon and Sam Adams have great tours. (This photo is so old – I was growing out bangs, don’t judge the hair). 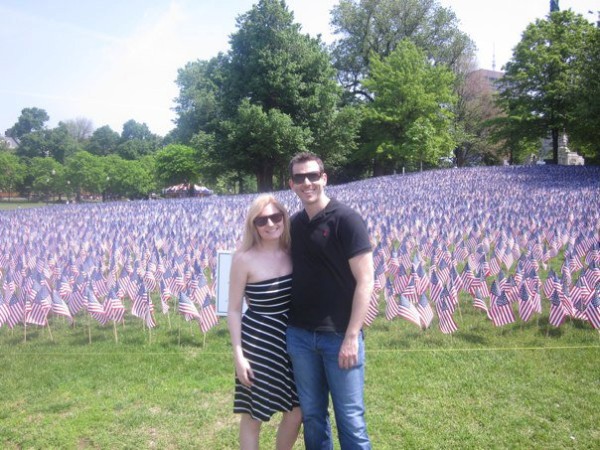 Boston Common is Boston’s big park. In the summer you can ride the swan boats, and in the winter you can go ice skating. And be sure to stop by the Make Way For Ducklings statues.

The Isabella Stewart Gardner Museum is a museum in the former home of Isabella Stewart Gardener that houses her art collection. It is also the home of Boston’s greatest mystery. On March 18, 1990, a pair of thieves stole 13 works of art, including a priceless Vermeer and a Rembrandt, from the museum. The FBI is still searching for the paintings.

The Museum of Fine Art Boston is just beside the Isabella Stewart Gardner Museum and it is the perfect museum to spend hours exploring on a very cold or rainy day. The expansive collection has everything from Egyptian Art to Contemporary Art. I especially love their Impressionist Collection and Monet’s La Japonaise, his portrait of his wife in Japanese costume, it’s one of my favorite paintings ever, and as a former Art History major, I have seen a lot of paintings. 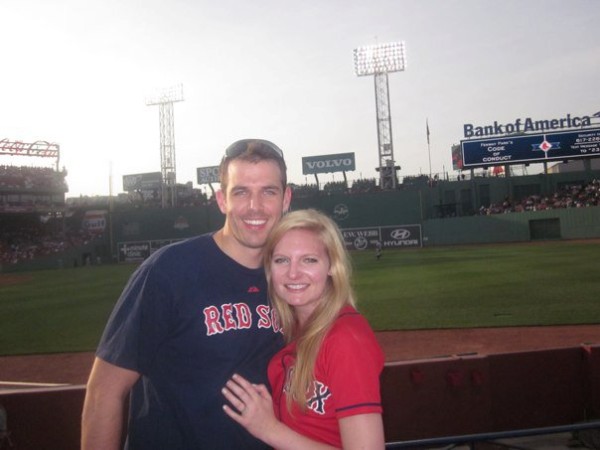 If the Red Sox are in town, catch a game. If they aren’t, visit the stadium for a tour.

For shopping head to Newberry Street which has a mix of luxury retailers and more affordable shops. 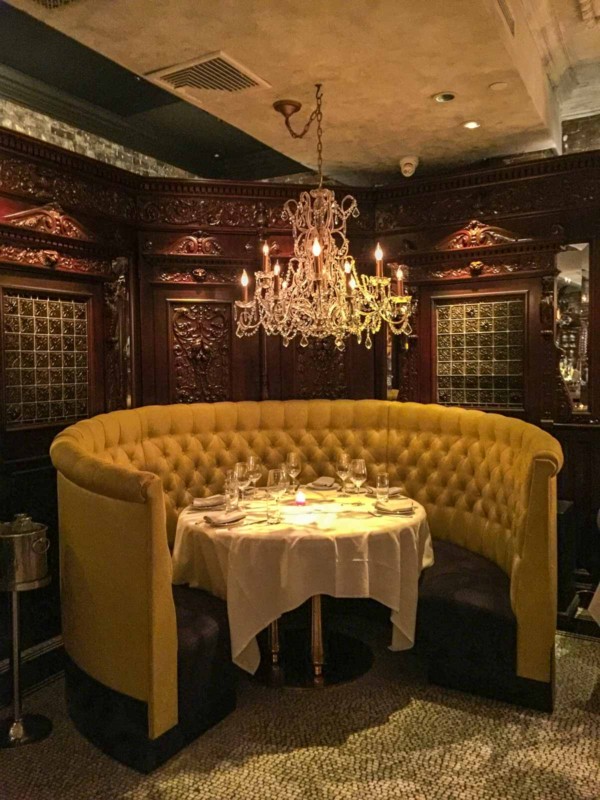 On our most recent trip, Charles and I discovered Yvonne’s a wonderful speakeasy style restaurant (the entrance looks like a hair parlor). We grabbed seats at the bar and shared a couple of appetizers – the hummus and a flatbread which were both exceptional and far less ordinary than they sound. The cocktails were superb, and the space was a cross between elegant and mysterious. We loved it, and I can’t wait to go back. 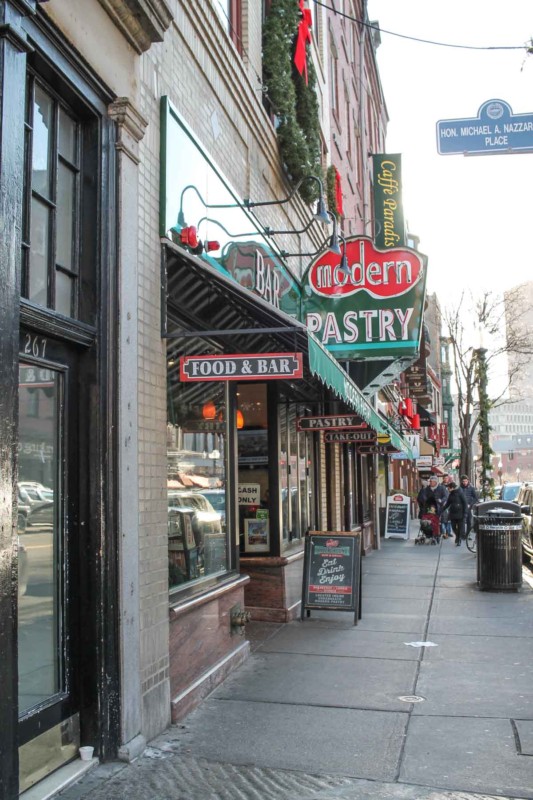 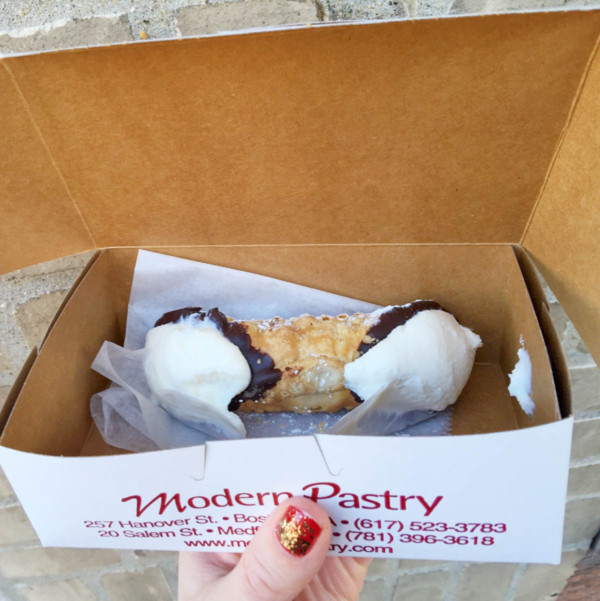 I always order the chocolate dipped cannoli with ricotta filling, there are other options, but I like to stick with the classic. Whenever one of my family members is in Boston they try to bring some cannoli back to Maine with them, it’s such a special treat. Heads up – it’s cash only, but there is an ATM at the bank next door.

Top of the Hub is a restaurant on the top of the Prudential Center and a fun place to grab a drink and enjoy the view. They have a weekday prix-fixe lunch for $29 too. 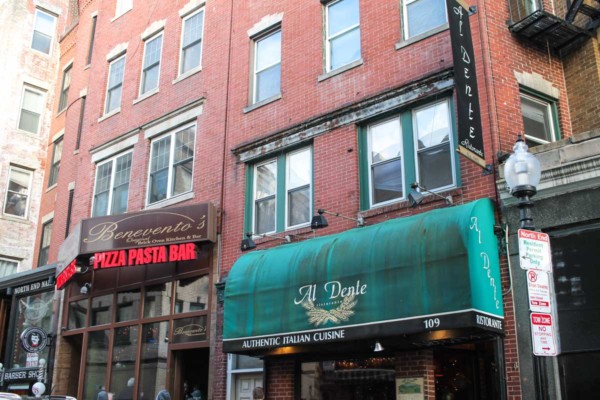 Al Dente is one of the many Italian restaurants on the North End, and it is my family’s favorite. They have a menu full of Italian classics, and they make their pasta fresh in house. You can also pick your own combination of pasta and sauce so you can get exactly what you want.

Benevento’s is Al Dente’s sister restaurant next door, and it specializes in pizza. It’s more casual than Al Dente, but it still has some of the same pasta and meat dishes. 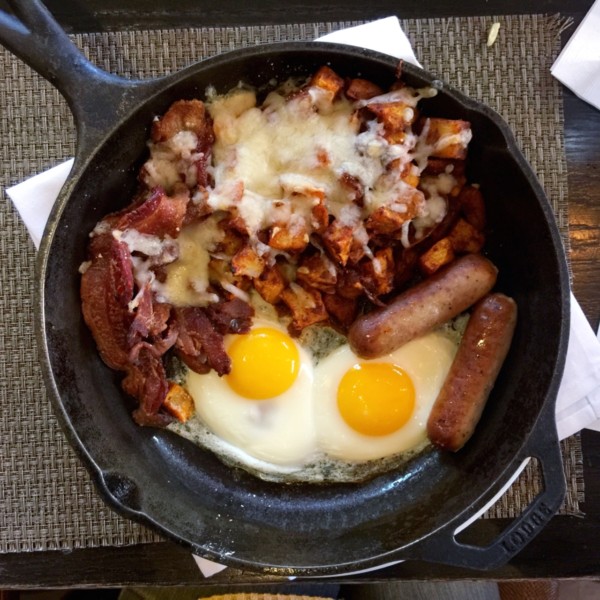 Stephanie’s on Newberry is conveniently located if you shopping on Newberry Street. It also has a very man-friendly brunch menu.

Charles and I ended up having a late night meal at Bricco’s on Christmas Day after our flight was canceled. We had never heard of the restaurant before, but I loved their meatballs! 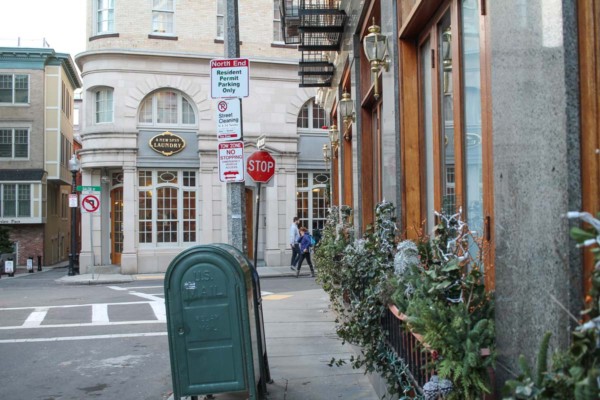 Have you been to Boston? What are your favorite things to do? Tell me in the comments!