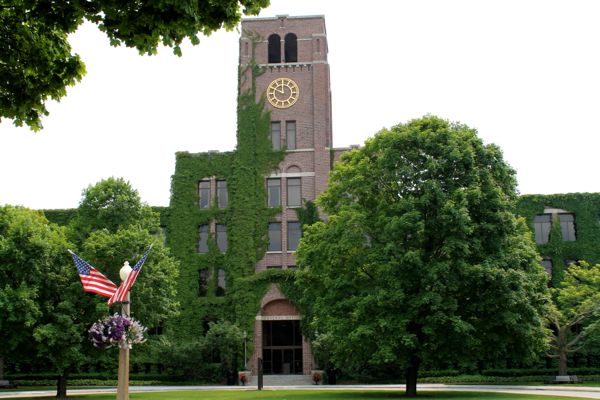 When Charles and I were looking for a location for a Fourth of July weekend getaway, everyone gave us the same recommendation: The American Club in Kohler, Wisconsin. This five star/five diamond resort known for its idyllic beauty and charm is just over 2 hours North of Chicago. Our friends’ recommendations set our expectations high, and we both had such a fabulous time that we can’t even put our fingers on what our favorite part of the trip was. 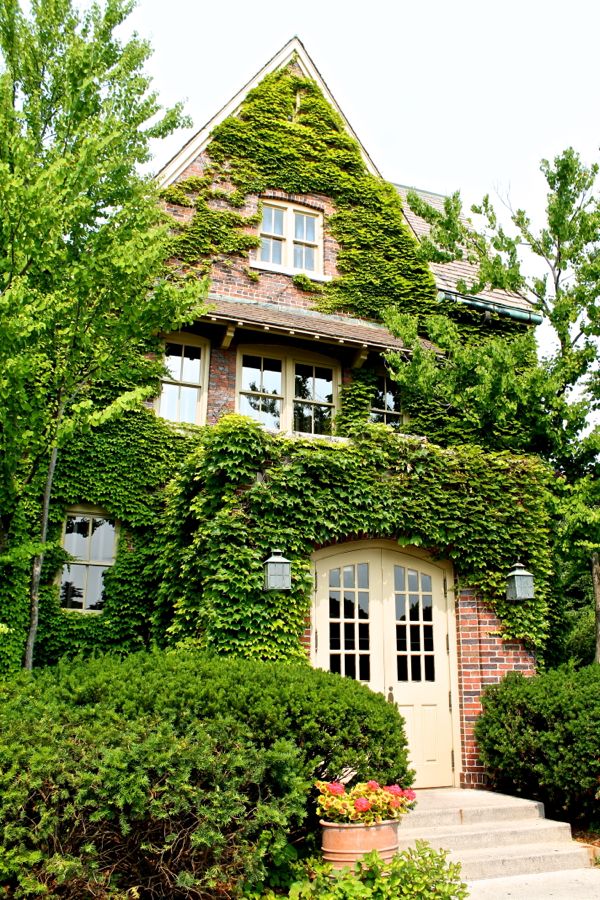 You are likely familiar with Kohler’s Kitchen and Bath products, and yes, Kohler, Wisconsin is where the Kohler Company is based. The Village of Kohler was built around the company’s plant, and The American Club was originally built to house single immigrant workers. In 1981, the large building that had been a dormitory became The American Club, a luxury resort with classic American decor and charm. Today, the resort is home to the Waters Spa, nine restaurants, and a pair of championship golf courses.

One of the fun things about this trip was that since I planned our stay, everything was a surprise for Charles. Once we entered the Village of Kohler, we were welcomed with lush green fields, streets lined with American Flags, and ivy covered brick buildings. It felt like something straight out of a Rockwell painting. 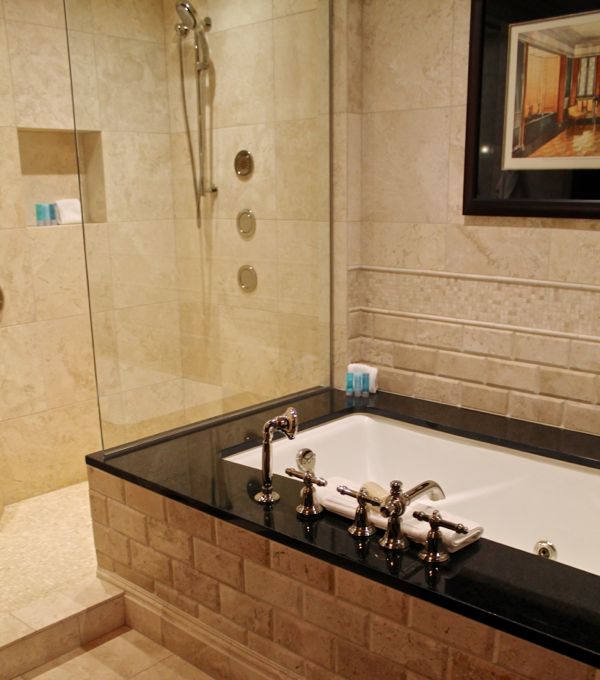 We checked in to find that we had been upgraded to a suite. The large room had a sitting area with a fireplace and a wet bar, and a separate bedroom with a king sized bed overlooking the courtyard. As you might expect, the most impressive room was the bathroom, which had an oversized whirlpool tub, a walk in shower, double sinks, and a seating area in the center. It was a true showcase of Kohler artistry, and it made us want to make some upgrades to our master bath at home. 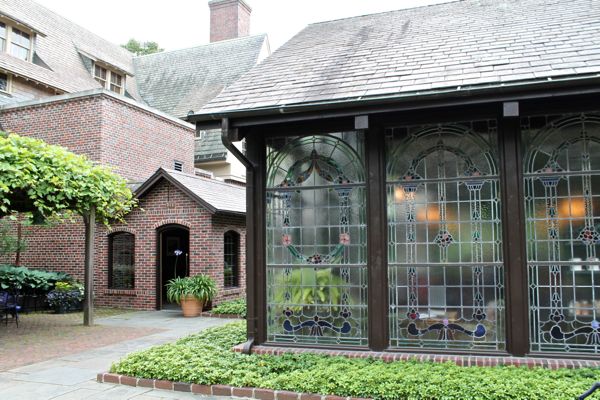 The resort offers a wide variety of activities. Golf is hugely popular – the PGA Championship is taking place at Whistling Straits later this summer – but we opted for some more relaxing ways to spend our time. Our first evening was low key – we were tired after working on Friday and then driving up. We explored the hotel, finding the Greenhouse, an adorable stained glass building in the center of the courtyard garden. The Greenhouse has a coffee shop/ice cream parlor, and the courtyard has swinging loveseats and flower gardens. 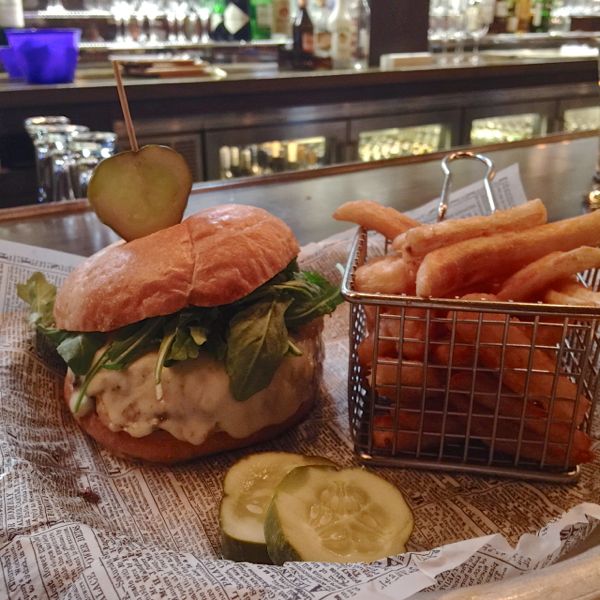 Next we went to find some dinner. We chose to dine at the Horse & Plow, the resort’s casual pub. The bartender suggested that we start with an order of the fried Wisconsin cheese curds, which were lightly fried balls of perfectly melted cheese. Then I had a chicken salad, while Charles dined on the bison burger with thick fries. Horse & Plow reminded me of the Chicago gastropubs where were usually hang out on Friday nights – but with much better food. 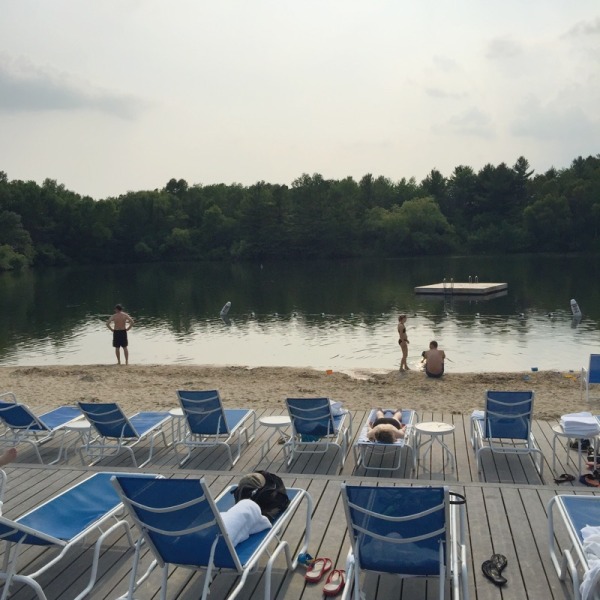 We spent our first day biking around town, visiting the shops, and lounging by the lake at the Sports Core. The Sports Core is a lakeside fitness facility open to hotel guests that features indoor tennis courts, pools, and weight rooms. Charles got a workout in, while I chose to sip on beer beside the lake. It was a relaxing, and family friendly, atmosphere. 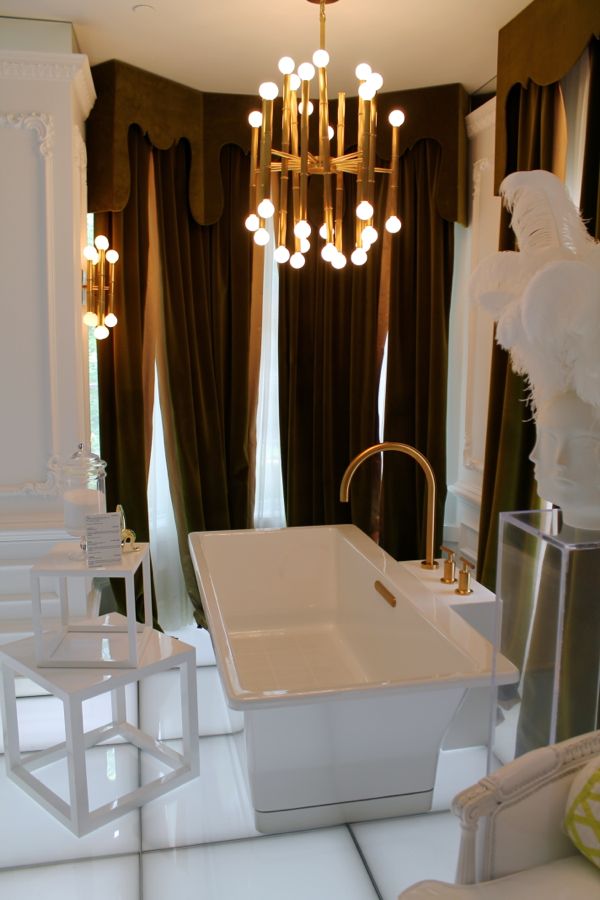 We also stopped by the Design Center, which showcases the wide range of Kohler products, tells the history of the company, and features bathrooms and kitchens created by designers. Browsing the designer showcase of bathrooms and kitchens was a highlight, and I definitely wished that I could install the above bathroom in our home. 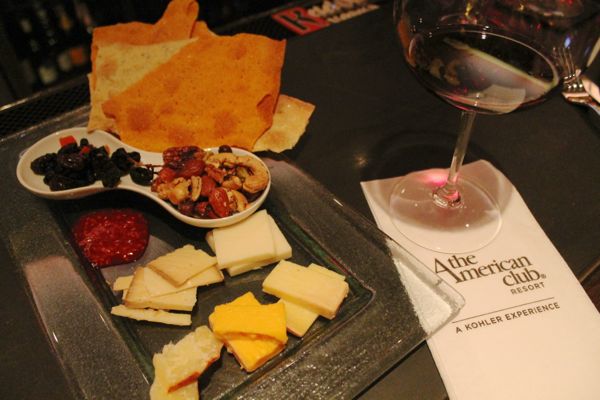 That evening we went to The Winery, a wine bar in the lower level of The American Club. The space has stone walls and it feels like a wine cellar. The menu offers wine, beer, cocktails, and a huge selection of Wisconsin cheeses, and we loved it. The bartender, Peter, was very knowledgeable and he provided thoughtful wine recommendations when Charles built his own wine flight. I ordered a sparkling rose, my new drink of choice, and assembled by own cheese flight. Yes, you can build your own cheese flight! Even though the menu offered several cheese flights, I chose to build my own since I recognized some cheeses that I love on the menu. Pleasant Ridge Reserve is one of my all time favorite cheeses so we had that along with a 10-year aged cheddar that was the ideal balance of creamy and sharp, a Gran Queso, a Gruyere, and a mixed milk cheese made from a blend of sheep, cow, and goat milk. It was a lovely start to an evening that continued with dinner at the Wisconsin Room (more on that later), and ended with an impressive fireworks display.
On Sunday we were up early for lakeside yoga. I had thought that even though the class was called Power Vinyasa, that it would be a calm easy class to start my day. While the class was certainly more challenging than I had expected, it was a a great workout. Then we had a big brunch at The Wisconsin Room, one of the restaurants at The American Club, and headed to the Kohler Waters Spa. 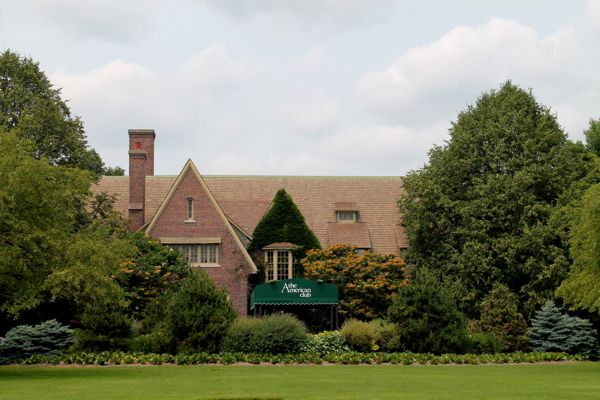 The Kohler Waters Spa is unlike anything I have ever experienced. Located just beside The American Club, the spa offers a full menu of treatments and has co-ed lounging areas. We checked into the spa an hour early and spent time at the two lounge areas with pools. Our couple’s massage was worth every cent, and when the time was up we were in a state of zen. We hung around the spa a bit longer to spend time in the steam rooms, saunas, and whirlpools in the separate locker rooms. The spa day was a nice way to enter a complete state of relaxation before heading home. (photos aren’t allowed in the spa, so visit the website to see images)
I would like to extend a huge thank you to The American Club for showing us such a fantastic time; I can’t say enough good things about the resort. In addition to the full roster of activities, the resort also hosts lots of events including the PGA Championship, In Celebration of Chocolate, and the Kohler Beer Festival. I am particularly interested in returning for the Kohler Food and Wine Experience. The four day fest runs from October 22-25 and features interactive culinary events, including appearances by Jacques and Claudine Pepin; it sounds like foodie heaven.
Keep your eye out for a post all about the Wisconsin Room, one of the restaurants housed at The American Club. It will be coming your way soon!