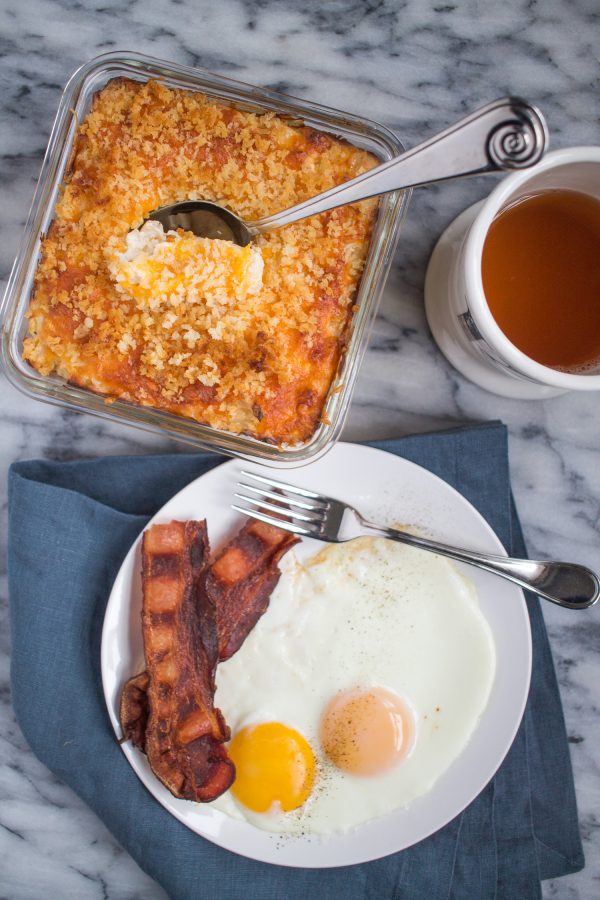 My sister and I recently spent a weekend at The American Club in Kohler, Wisconsin and a highlight of our stay was the brunch. It was my third time staying at The American Club and I started to look forward to brunch the second we booked the trip. It has the ideal mix of sweet and savory and breakfast and lunch choices. One of the staples of the brunch at The American Club is their Hash Brown Casserole, it is cheesy potato goodness with a crunchy panko topping. Obviously, I needed to recreate it. 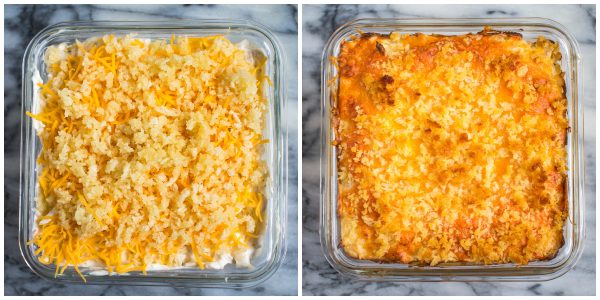 Luckily, the hash brown casserole was easy to replicate. I whipped some reduced fat cream cheese and reduced fat sour cream together, stirred in the hash brown potatoes, poured it into a baking dish, and topped it with shredded cheddar cheese and panko bread crumbs. The active preparation time is just about 10 minutes, and then the casserole bakes for an hour. Plus it is recipe that can easily be doubled if you are cooking brunch for a crowd. I think that the final result is pretty comparable to the hash brown casserole at The American Club. 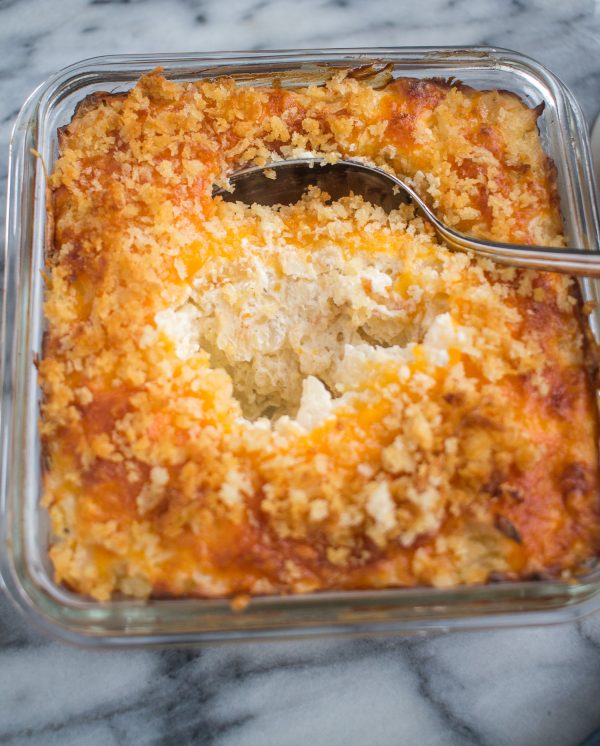 You can buy shredded hash brown potatoes at the grocery store. I have seen both a plain version and a Southwest version that is already seasoned. I used the Southwest version so that I didn’t even need to season the potatoes. If you are going to use the plan potatoes, be sure to season them with plenty of salt and pepper.
I love this recipe because it is much easier than preparing traditional hash browns which seem to take forever to brown. This casserole can be prepped in just minutes and then you just wait for it to bake. It’s much less active preparation time.
Although this is intended to be a breakfast side dish, there are no rules saying that you can’t serve it at dinner time. I think it would be a fun side dish to serve with roast chicken.
Hash Brown Casserole (inspired by The American Club)

Your Hash Brown Casserole looks delicious! Your post is awesome and thanks so much for sharing it with us at Full Plate Thursday. Hope you are having a great day and come back to see us real soon! Miz Helen

This would be great for serving weekend brunch! It could feed so many people. Thank you for sharing with Fiesta Friday:)

Yes, it could definitely feed a crowd!

This looks delicious. I will share in Twitter now. So glad to see how to make this and find you via the frienship Friday!

I love hashbrowns, and this recipe looks so easy you could even whip it up with company in the house!

It's super easy! Hope you love the recipe!

What a great way to serve potatoes for breakfast. Thank you for sharing at What’d You Do This Weekend? Hope to see you back next week!

Thanks Linda - potatoes are the best part of breakfast!