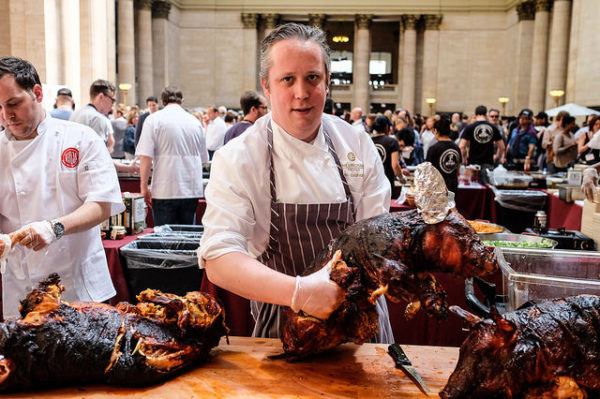 Chef Tim Graham is the Executive Chef Travelle at the Langham Hotel, and a familiar face at Chicago’s many food festivals. Most recently, he was serving up roast pork at the Rioja Wine and Tapas Festival. I got a chance to talk to him about his love of Rioja wine, his favorite food pairing for Rioja, the seasonal additions you can find on Travelle’s menu, and more. I want to add that Chef Graham is one of the nicest chefs that I have met, and no, we aren’t related.

How would you pair Rioja Wine?

I love a Mugo Rosé Rioja, I think when most people think of rioja, they think of the reds. But there are a lot of brilliant whites available, and rosés. This time of year, rosé is so craveable, and the Muga Rosé is perfect for a day like today. I find myself in the Spring drinking the Rioja rosés and whites. In fall and winter, and even a late summer night after I drank all the beer, I’ll drink a Rioja red. They are super easy flavors. It’s barbecue wine, it’s outdoor wine, it’s with friends wine. It’s so accessible.

Do you cook with Rioja or is it more of a pairing wine?

I have in the past done a Muga Blanc braised short ribs for a summer dish. I have used Rioja whites to cook before.

Are there any Riojas on the wine list at Travelle right now?

Yes, there are quite a few.

What would the ultimate food pairing from your menu be?

For me it would be a Rioja red, either a Muga or something a little more niche and eclectic, with the Piri-Piri Chicken. The little of spice the grill, it has the vibe of summer. It has the onions underneath, in Spain this time of year they just grill spring onions.

Chicken has come back in a big way, but now it’s brined, it’s salted, it’s air dried, do you think that this trend will continue?

I think it’s starts before all that and that we are starting to see better chickens on the market. Before the brining it, there are more chicken-y chickens on sale. It starts with an availability. The farmers have started to buck the giant chicken house trend and breed their own farmhouse chickens. I think that is where it started. None of it would have gotten anywhere if we were still dealing with commodity chicken. It is refreshing when a farmers says to check out this chicken and I eat it and I love it. I don’t think it is a trend I think it is part and particle with the further artisanal-izing of even commodity food groups.

I think that chicken used to be the cop-out thing to order on a menu. Sometimes I think that I can’t show up at a restaurant and order the chicken. But now it’s a main player on menus and something that you should be ordering the chicken on menus, not just because you are picky about food.

We still have a little push back. We get guests that tells servers “I cook chicken at home all the time, I don’t go out to restaurants to order it.” There is some truth, they are not going to make a risotto at home, probably, they are never going to cook veal scaloppine, there’s certain dishes that they eat in restaurants and never going to cook. But I don’t think that the home cooks have the chicken that I am buying, they don’t have the time or space to brine it for two days, or marinate it for three days, and do the whole process. They are generally surprised when we give them the product that we give them, and it’s chicken. I don’t see it anymore as being an easy eat. I think ground beef took that spot a couple decades ago, and you can buy it in small portions.

What is your late night end of shift go-to thing to prepare?

My wife and I will make something quick, always a one pot meal. Generally it is something leftovers driven, like a leftovers fricassee or sometimes a leftovers pot pie, that’s our fancy version. At home, late night, it will probably be a tartine of sautéed vegetables and a fried egg or a quesadilla, something that is very quick and something I don’t have to make many dirty dishes to make. It satisfies us both without being too heavy.

What are the new Spring flavors that you are really excited about?

I think they have become a much more appreciated seasonal item in the past couple of years.

It’s almost required. Guests want them right away. It’s not even Spring here, so we buy them from Oregon. Local ramps just came last week, but we have had ramps on the menu for a month.

The new ingredient that I have loved the last few Springs is green strawberries. They are unripe strawberries, almost like green tomatoes. We have them right now with a burrata dish and they are really acidic and really astringent, super springy. They are very hard, so we slice them very thin on a mandolin, almost making a carpaccio. Then we add burrata on top. They make a great mostarda we do a great green strawberry mostarda for our salamis. We just made green strawberry pesto with our burrata with green strawberries, pistachios, basil and no cheese because it goes on the burrata.

At your restaurant, you are in a glass kitchen.

Yes, the chefquarium! Do you feel a certain amount of pressure by being on display?

I have always loved open kitchens. And no, it’s more functional than anything because we see when table 32 gets up. It’s more functional to see servers and to see what is going on. I think we made a big error calling it the front of house and the back of house. I think it’s just a house, and having an open kitchen breaks that wall down a little bit. Overall I think it is a real positive. You know, you always watched your mom cook. 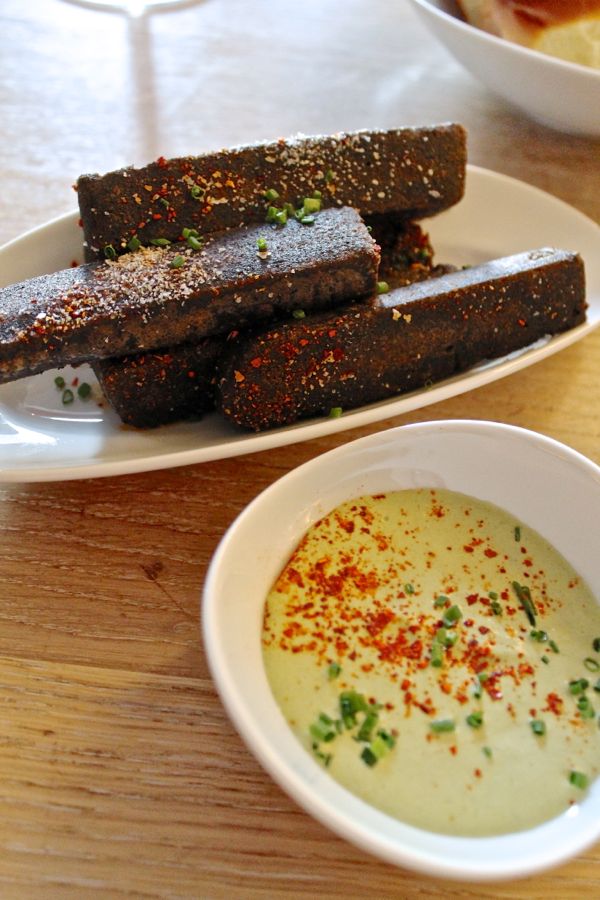 What do you think that the James Beard awards coming to Chicago means for the city. Do you see it as recognizing that the culinary scene here is one of the biggest in the country?

I think it is more of a city planning thing. I think that we are already proud what we do. I am happy for it because it produces more civic business but as far as it coming here because Chicago finally put itself on the map, I think that is reactionary. You look at the NFL draft being here. You see how many movies get filmed here. It’s a grander scheme than just the culinary world. I really love it, but I don’t think it validates us.

Are you involved in any of the food and wine festivals that are happening in Chicago this summer?

We are doing the Hamburger Hop at Chicago Gourmet. We are doing about two events a month until September, I look at four day windows.

Is it exhausting to make it through the festival season?

No. There is so much positive energy feedback that you get at events like this. It’s more a booster. To connect with people is why I do it. It’s so engaging and you get to meet so many wonderful people that it feeds me more than it takes away. This is the bonus part. You know what the best part is? Seeing all the chefs that I never get to see. It’s like a bunch of friends that you never get to see, that take their time out to come to these, so it’s all a big party.