A guide of what to do in the East Village. I love this neighborhood because it has a little bit of everything and it still maintains its quirky vibe. 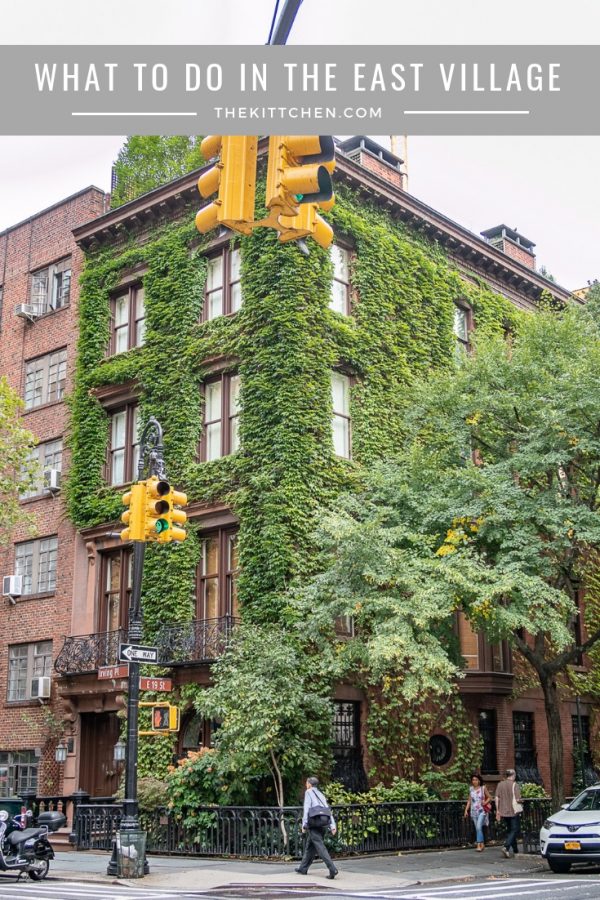 The East Village has a high concentration of excellent restaurants, so arrive in this neighborhood hungry. Take your pick from Ukrainian, Italian, Moroccan, or American food, visit an offbeat museum, or stop into one of the oldest bars in the city.

What to do in the East Village: 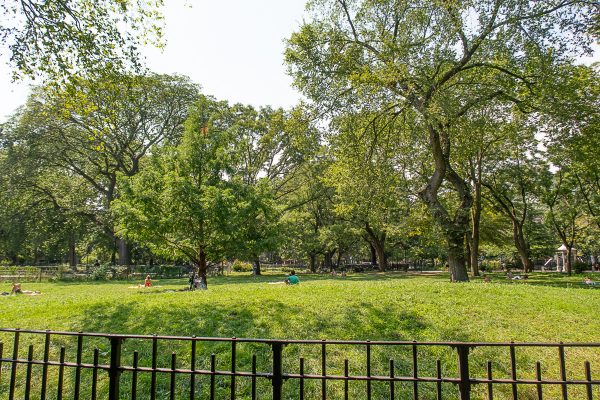 A large square park with a playground, a dog run, skate park, and basketball courts. The park has been the site of riots, protests, and festivals. It is a gathering place and spot where locals sunbath on warm days. 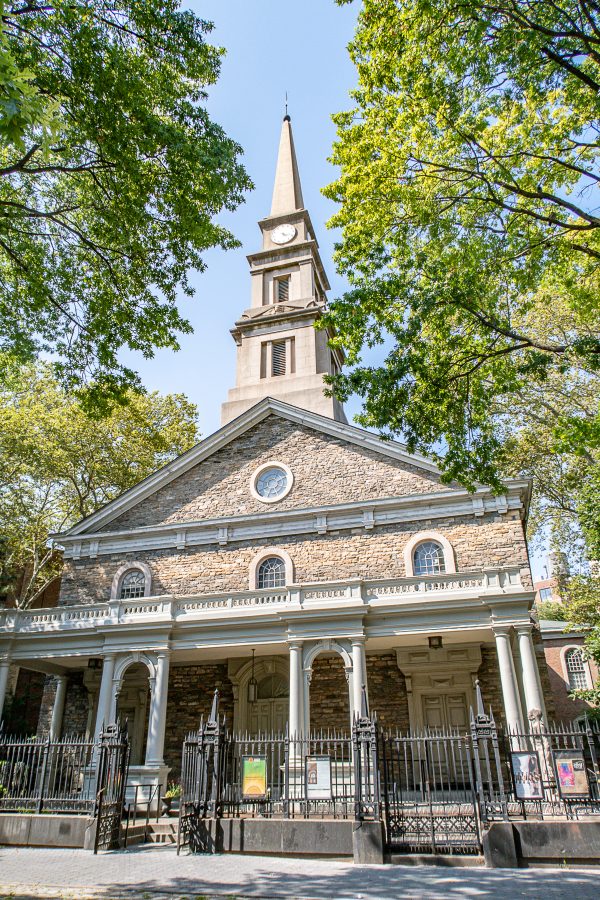 St. Mark’s Church in the Bowery

An Episcopal Church with Georgian style architecture, construction was completed in 1799 and it is the second oldest church in Manhattan. The church has actively supported the arts community. Martha Graham danced here and poets have lectured here. Patti Smith’s rock career was launched in part because of a poetry reading she gave at this church.

There are small community gardens hidden all over the East Village. This one is open to the public. It is located on the site of a former tenement building that burned down and is just 24 by 100 feet. 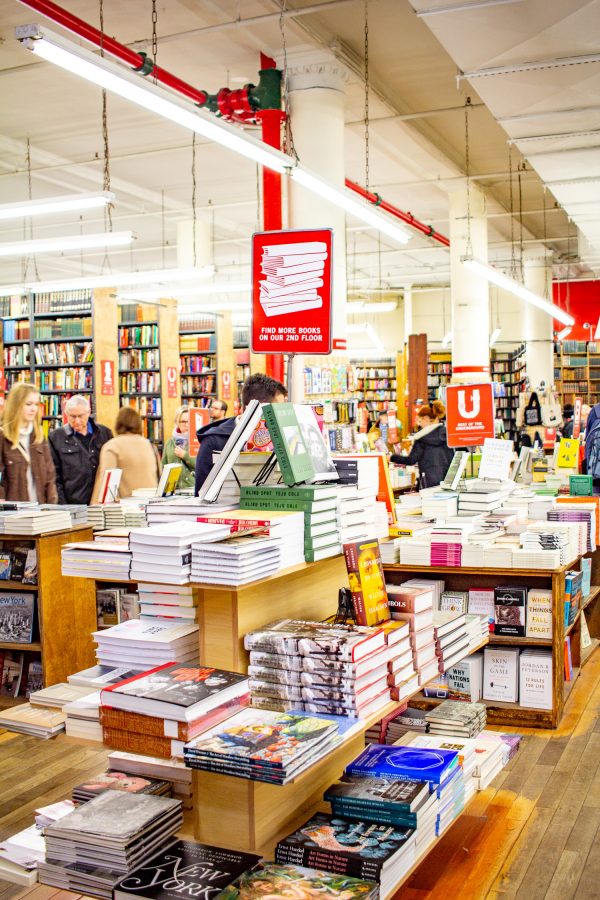 One of Manhattan’s iconic book stores, The Stand has “18 miles of books” and hosts many literary events.

Are you in the market for a taxidermy cow with two heads and five legs? That’s just a taste of the oddities you can buy at this shop. 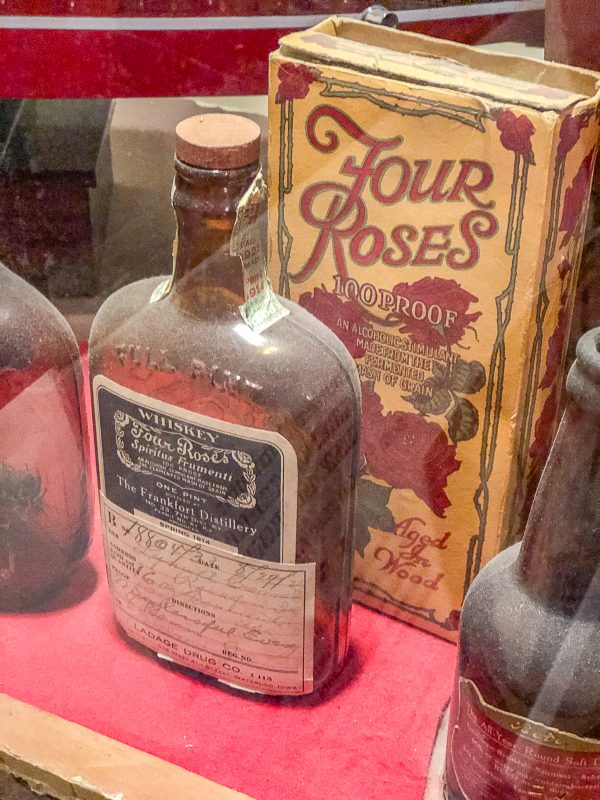 Museum of the American Gangster

This museum is located above the William Barnacle Tavern which was a speakeasy during the time of Prohibition. The museum is small and has displays outlining the gang activity in America during the Prohibition. After some time the museum, the tour goes into the tavern’s basement to learn about the owner’s plan to blow up the place if the feds came knocking. Limited tours are available in the afternoons.

The Museum of Reclaimed Urban Space

A small volunteer-run museum that focuses on how urban spaces are used in New York City. Learn about how bike lanes made the city friendly to cyclists, how New Yorkers are working to protect community gardens, and how public spaces have been the sites of protests for decades. It’s worth stopping by if you are in the area. 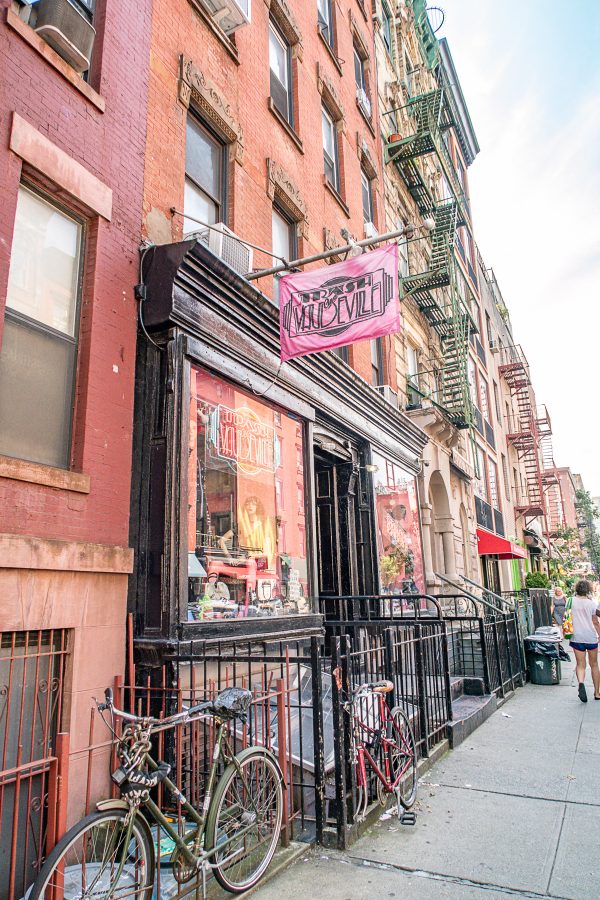 Considered one of the best shops for punk rock attire, the store opened in 1975, moved in 2016, and was once frequented by the Ramones. 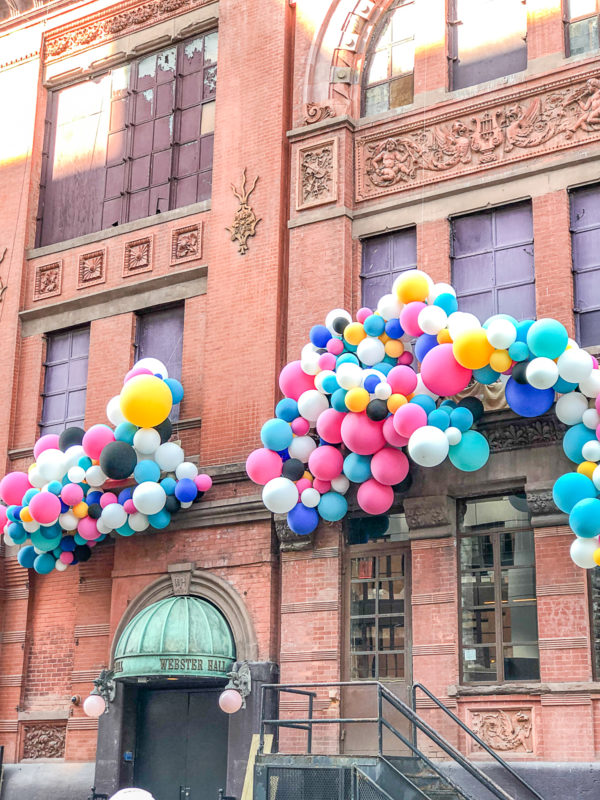 A concert venue and night club in an 1886 landmark building.

Where to Eat and Drink in the East Village: 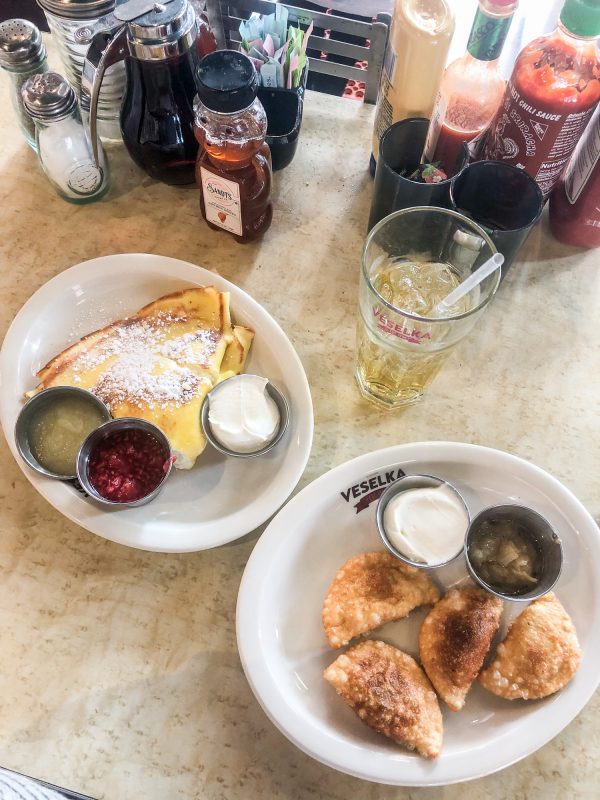 One of the more affordable restaurants in Manhattan, Veselka has been serving traditional Ukrainian cuisine since 1954. It’s open 24 hours a day.

A somewhat divey but fun bar where you can get manicures and martinis. 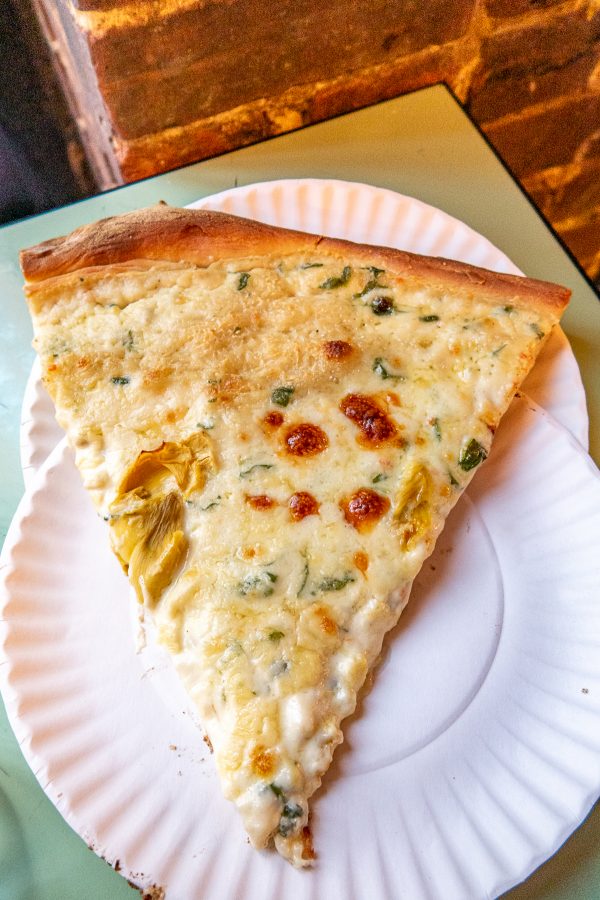 This widely popular pizza place now has a handful of locations all over the city, but it all started at their location on 14th Street. Be sure to try their namesake pizza, the artichoke.

Try Moroccan cuisine at this family-owned restaurant. The food is wonderful and the atmosphere is fun. 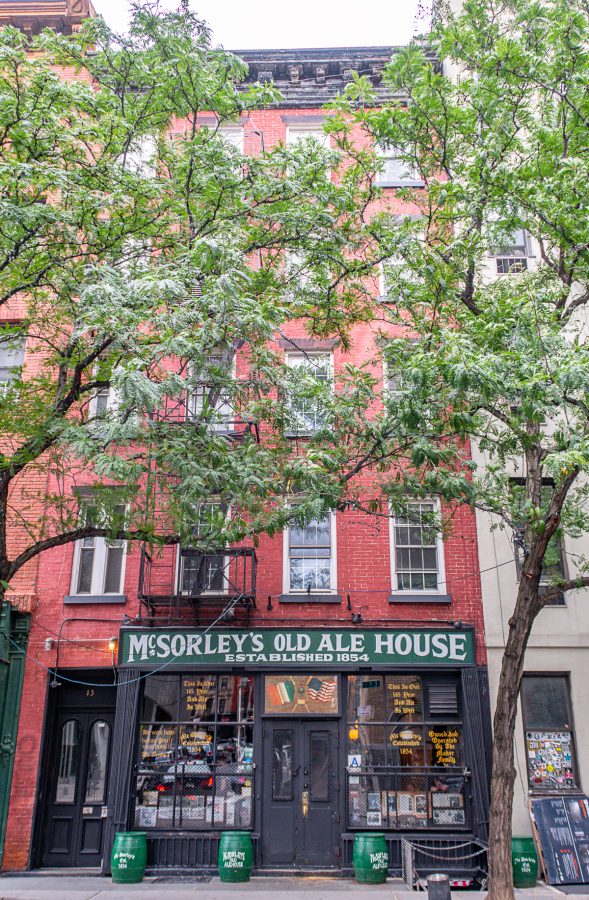 Established in 1854, and known for serving their own ale, this bar didn’t allow women until the 1970s. Both Abe Lincoln and John Lennon have been here and it claims to be America’s oldest continuously operated bar, but Pete’s Tavern also makes that claim.

They serve up classic New York City style red sauce Italian fare at this spot. Head’s up, it’s cash only.

A very small restaurant known for their brunch. I am a big fan. 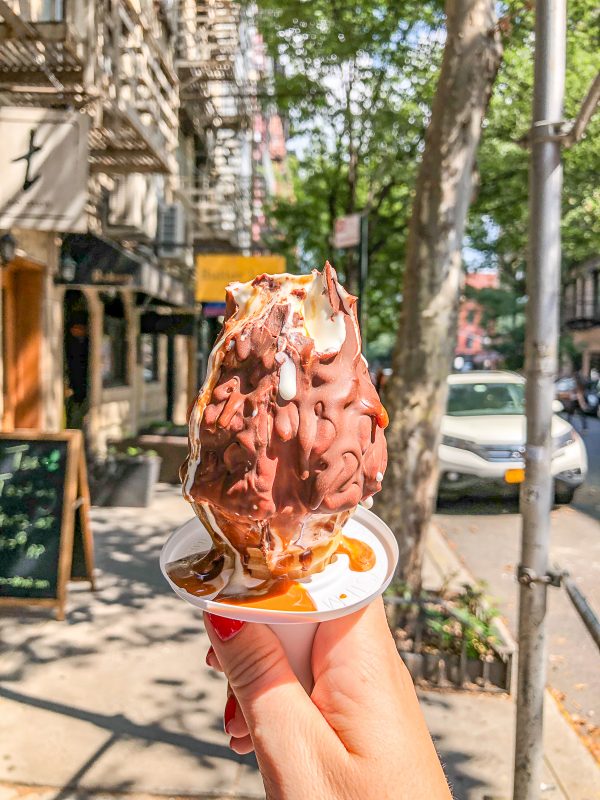 Who knew soft serve could be so fun? They turn soft-serve cones into delights by adding toppings and sauces.

My sister raves about this brick oven pizzeria.

A Mexican restaurant with an outdoor courtyard that serves up tacos, quesadillas, enchiladas, and more. 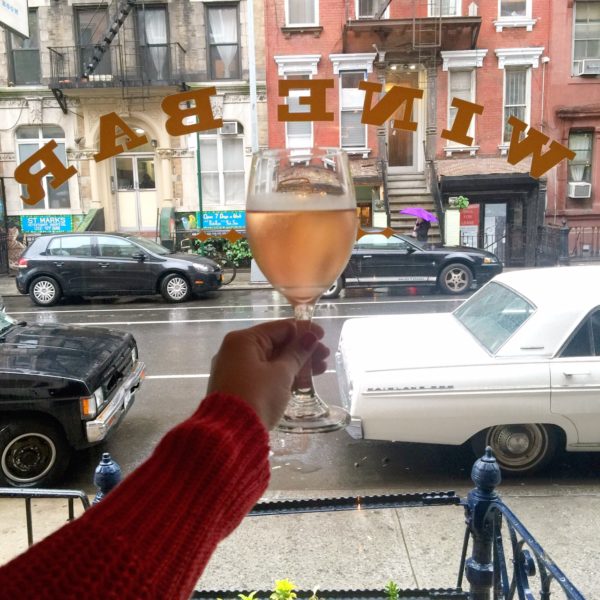 It’s half wine bar, and half beer bar located in an old tenement building. It’s candlelit and cozy.

My go-to dive bar in NYC is The Scratcher, a no-frills

A Thai spot with a trendy vibe on St. Mark’s Place. Order the green curry puffs and the chive pancakes.

A Japanese ramen restaurant that is considered to be one of the best ramen places in the city. Be prepared to wait since it’s popular and they don’t accept reservations. 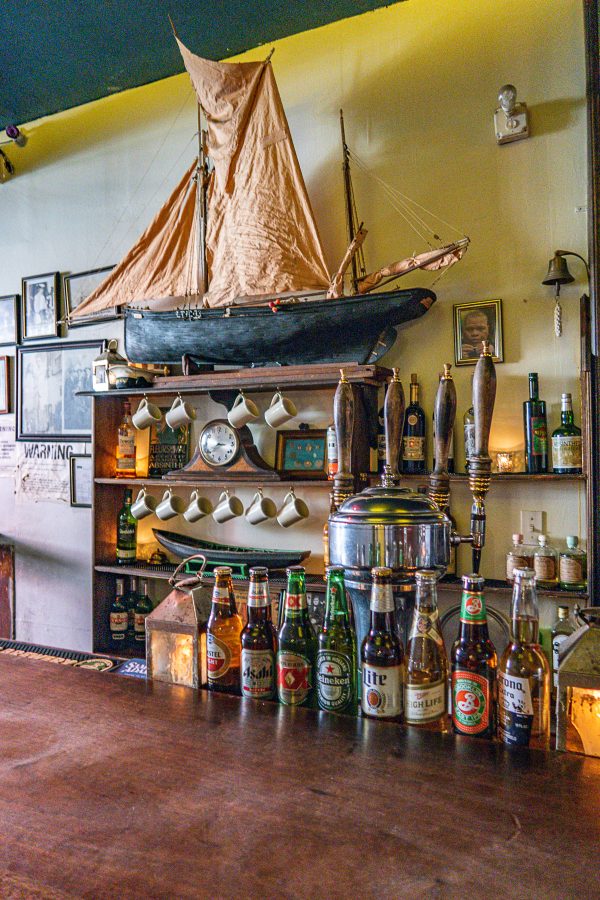 A divey bar located below the Museum of the American Gangster. In the 1920s the walls were filled with dynamite and the owner planned to blow the place up to evade authorities if they came knocking. Al Capone drank here during the Prohibition.

The speakeasy that everyone knows about is located through a phone booth at Criff Dogs. 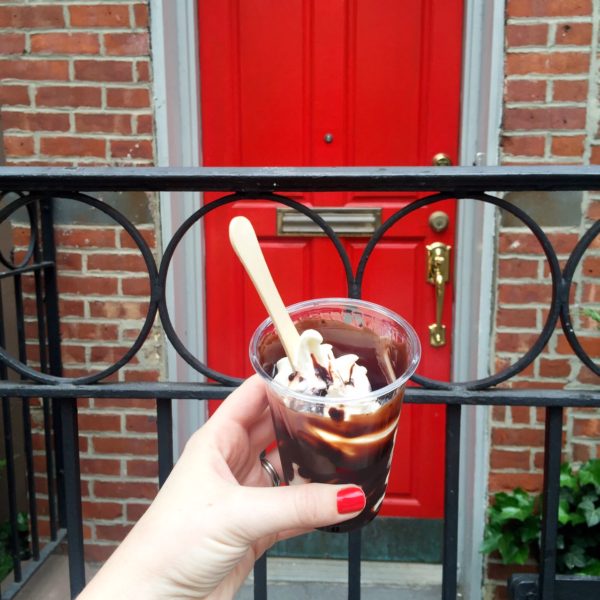 Have you been to the East Village? Do you have any favorite things to do in the neighborhood? Share them in the comments!