Wondering which NYC airport to fly into? Let me explain your options and the pros and cons of each.

Heading to New York City?! You are going to have the greatest time! Need to decide how you which New York City airport to fly into? Let me help you out.

You have three options: JFK, Laguardia, and Newark.

Pick this airport if: It is great if you are loyal to Jet Blue – they have a big beautiful terminal there. This is also the place to go if you have a longer haul or international flight.
Getting to and from JFK: It’s farther away than LGA but there is subway and Airtrain access. The subway to JFK usually takes at least 90 minutes (A or E train) from Manhattan but it’s reliable and you don’t have to worry about traffic. You can also use Blade helicopter service from Manhattan (not cheap, but very convenient). Personally, I thought taking the Long Island Railroad from Penn Station to Jamaica and transferring to the Airtrain was easiest. The ride from Penn Station to the Jamaica station is 23 minutes making it faster than the subway.
What to eat while you are there: There are plenty of excellent lounges, especially in the international terminal (Delta, Emirates, Virgin Atlantic, British Airways) as well as food options including two Shake Shack locations and Marcus Samuelsson’s Uptown Brasserie.

Pick this airport if: It’s the most convenient if you are going to be staying in the Upper East Side, Queens, or North Brooklyn. LGA doesn’t have international (other than Canada) or longer haul (West Coast) flights. If you need a shuttle flight to Boston, Chicago, or DC this is your place. Delta and American have a lot of flights out of LGA so if you are loyal to those airlines this is your best bet.
Getting to and from LGA: There is no easy public transportation, you can take a bus or a subway to a bus, but Uber or taxi is the best option.
What to eat while you are there: There are limited lounge and food options at the airport. There is an Amex Centurion lounge between terminals B & C but it’s before security. My favorite pizza place, Artichoke Pizza, has a location in Terminal C.

Pick this airport if: Don’t overlook this airport because it is in New Jersey, this is your best bet if you live in west side Manhattan or New Jersey. This is one of United’s main hubs so if you’re a loyalist, this is likely the best airport. It has a negative perception because it’s in New Jersey but it’s really not that far from Manhattan. For me, flying into Newark was a much better experience than leaving. On the day we were leaving the TSA PRE check line was closed (at 4pm on a Tuesday) and the security line was crazy long. We were flying Southwest and the gate area was small, overcrowded, and only had two restaurant options, and only one bathroom.
Getting to and from ERW: You can take direct buses to/from Manhattan (Port Authority, Bryant Park, Grand Central) or take NJ transit trains or Amtrak. Note that if you have a very early flight it’s sometimes hard to use the public transit, so you may have to take an Uber or cab. If taking a cab or car try to avoid morning and evening rush hours as tunnel traffic can be very bad. Without traffic the trip takes about 45 minutes from the West Village.
What to eat while you are there: The food options are not great. You might want to pack something to snack on.

Consider other options too:

The one thing that drives me nuts about NYC is that none of the airports are easy to get to. The subway system doesn’t go all the way there and no matter which airport you are going, to the journey from the airport to the city will likely take at least an hour. If you live in a nearby city (Boston, Philly, Washington DC, etc) you should definitely take the train instead of a plane.

And in case you need some help figuring out what to pack, I created a NYC Packing List: 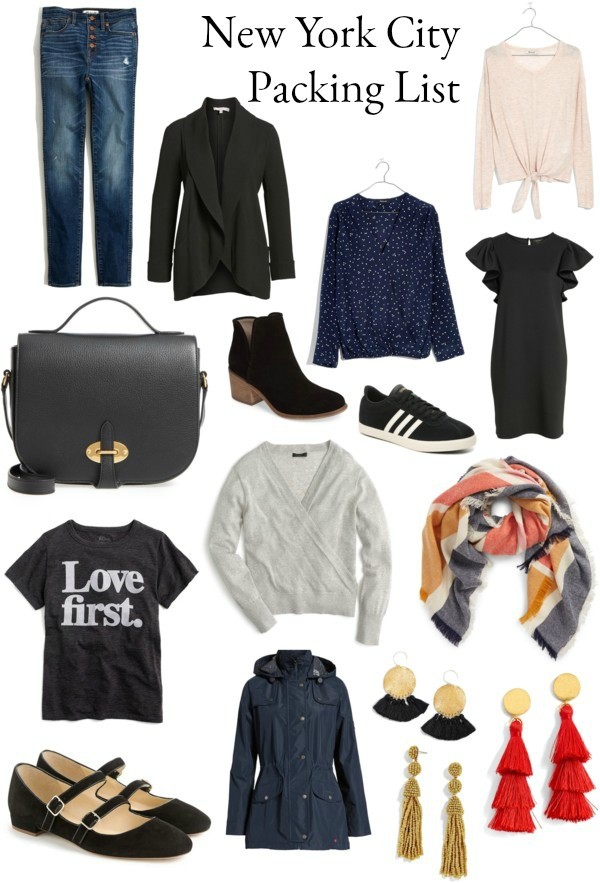 Thanks to my sister, Kelly, for helping me with this post!