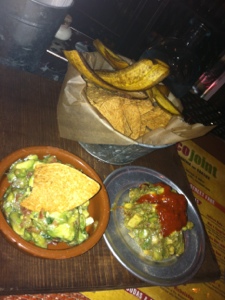 The other day Charles and I were out and about and we walked by Taco Joint in Lincoln Park. Charles did a double take, unable to believe that there was a taco place in Chicago that I hadn’t taken him to yet. The truth is that Taco Joint had been on my mental list of restaurants to try to over a year, but somehow we had not made it there.

Finally this past Wednesday night the stars aligned and we finally made it to Taco Joint. My friend Anne was hosting a party at The Blue Jean Bar just down the street – so Taco Joint was the perfect place to grab dinner after. The girls over at The Blue Jean Bar are big fans of Taco Joint and gave me recommendations of what to order. I gave them a heads up that I would have to exchange my new jeans for a larger size if I ate everything they suggested.

I have been married for just over 2 months, and there is 1 important rule for when we go to Mexican places. Order guacamole right off the bat with the drinks. Don’t ask the other person if they want guac, the answer is yes. Last night I got to Taco Joint 10 minutes before Charles. You do not have to wait for your spouse to arrive before you order guacamole. Your spouse will appreciate being able to dig into the delicous guac as soon as they arrive. Don’t judge how much time I have spent discussing guacamole so far, I think it is one of the greatest foods in the world. Back to Taco Joint – I ordered two of their guacamoles, because you can never ever have too much. We tried the traditional because the girls at Blue Jean Bar recommended it, and then the Rojo because the bartender I ordered it from recommended it. Both guacs were top-tier guacamoles. Don’t question my ability to rank guacamoles because I could make a chart ranking the dozens of guacamoles I have tried.

What makes Taco Joint’s guacamoles so delicious? First off, they have big chunks of avocado in them. The texture was perfect. It was a mix of these bigger avocado chunks and some avocado that had been mashed with the other ingredients. The traditional guacamole has cilantro, but not an overpowering amount, some restaurants go cilantro crazy and it overwhelms the taste of the avocado. The avocado needs to be playing the lead role in any guacamole. I really like having tomatoes in guacamole, and Taco Joint does include them in theirs. The red onion was chopped finely so that you didn’t get any bites that were 70% onion. The Rojo guacamole definitely had kick. When I took my first bite I questioned if it had too much bite, but my palet adjusted and I really enjoyed the spiciness. The guacamoles come with plantain chips and corn tortilla chips, the sweetness of the plaintains complimented the guacs very nicely. 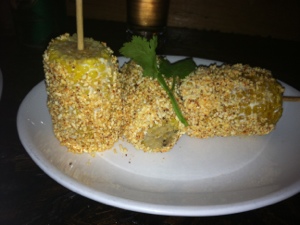 Next up we ordered Elotes, the Tinga Sope, and Charles got a couple tacos. The Elotes have changed my life. I want to eat more right now. Elotes are a common Mexican street food, and the description of what it is does it no justice. An elote is grilled corn on the cob with a light layer of mayonnaise that is then covered with cotija cheese and chile piquin. I don’t like mayonnaise, and you can’t really taste it in this dish. Let me just describe what this tastes like: perfectly cooked corn that is crisp on the outside, mushy on the inside, with a creamy cheesy topping that is slightly spicy. The corn is a little sweet and all the flavors come together in the best way possible. Order the Elotes. One order had three half ears of corn, just enough for the two of us. 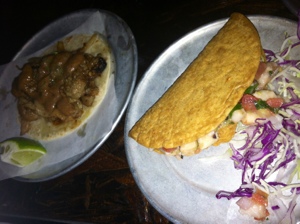 Charles ordered a couple tacos, but I totally forgot which ones, but he really liked them. Sorry that is not the least bit helpful, but when he was eating them I was falling in love with the elotes and not paying much attention to him. Oops. Suffice it to say that taco joint has tacos and they are good. 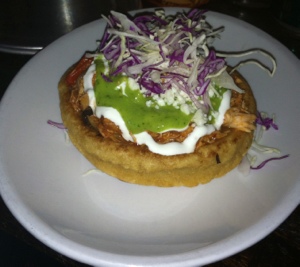 At least I took a picture!

I ordered the Tinga Sope. Taco Joint described a sope as being like a maize boat filled with ingredients. It is like an extra thick corn tortilla with a lip around the edge that keeps the filling in. The waitress said that some people pick it up and eat it, but I knew that I would get that all over myself so I used a fork and knife. All of the sopes at Taco Joint have black beans, crema, and fresco cheese, and you get to choose from a varitety of meat toppings. The Tinga came with marinated chicken and what they call guaca-salsa. The flavors were well-balanced and I thought the presentation was great. Sometimes taco fillings are not distributed evenly, the sope solved this problem. Each ingredient was stacked in a thin layer. Each bite included the crisp corn shell, black beans, crema, salsa, avocado, chicken, and cheese. More restaurants should serve sopas!

You have the choice to get many of the meat and filling combinations are sopes or tacos. Tacos are perfect if you want to try two or three different things, and sopes are almost an meal on their own. 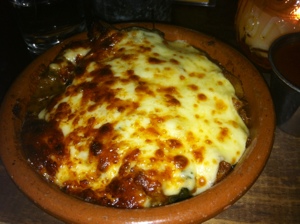 Charles and I still had a little room left so we ordered Queso Fundido. I love Queso Fundido because it involves cheese, the most important food group, and it also includes the word “fun”. It is essentially fun cheese. (Sidenote: the actual translation is “melted cheese”). We had the choice of ordering our Queso Fundido with either potatoes or chorizo on the inside, we went with potatoes. It was basically a whole bunch of melted cheese with roasted poblano peppers and potatoes in the middle. It was packed with a smokey and chipotle flavor, and came with tortillas so you could turn it into little tacos.

The Taco Joint atmosphere is 50% bar and 50% restaurant. I love the warm rustic interior. It isn’t loud or flashy. It is an inviting space. Definitely the perfect place for a casual Wednesday date night. I want to point out they have a walk up window if you need tacos in a hurry.