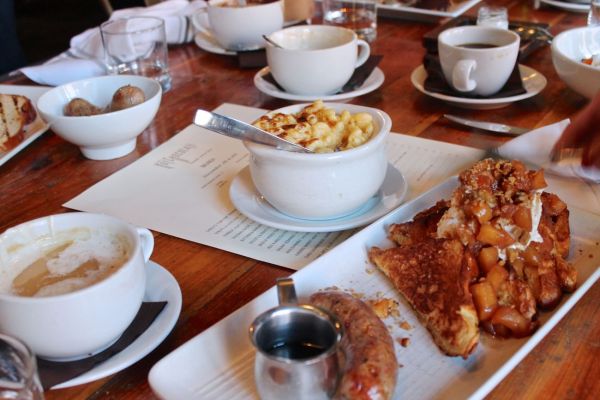 Mindy Segal is a rockstar Chicago pastry chef, and the brains behind Mindy’s HotChocolate. The restaurant is favorite for locals as well as a destination for tourists. As the name suggests, the eatery makes hot chocolate that is purely magical, but they also serve up lunch, brunch, and dinner with menus filled with creative, seasonal, and modern American fare. 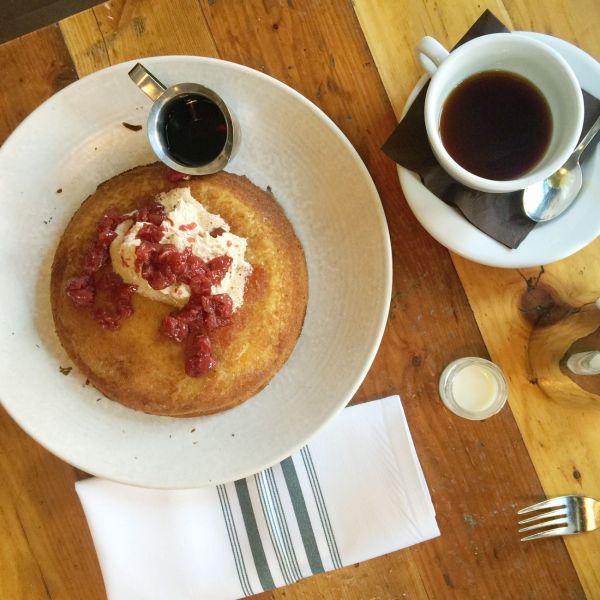 I recently met Mindy at the Global Food Tourism Conference, and I found her to be inspiring, confident, and above all else – super smart. She’s a woman in an industry dominated by men, and on top of that, it’s pretty rare for a pastry chef to open a full fledged restaurant instead of a bakery. 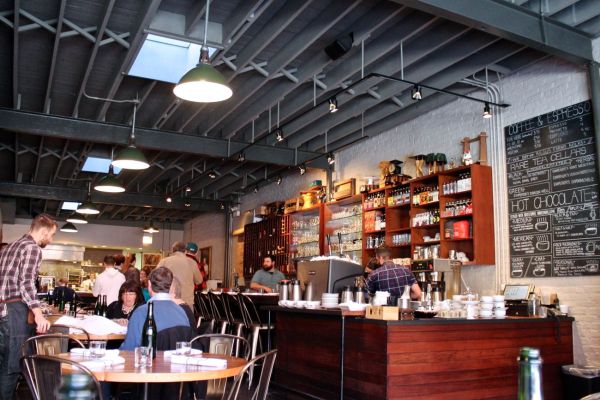 She took a space in a quiet corner of Wicker Park and turned into a hotspot that brought life to the area around it. The atmosphere is modern but welcoming, it’s the type of place where you instantly feel at home. 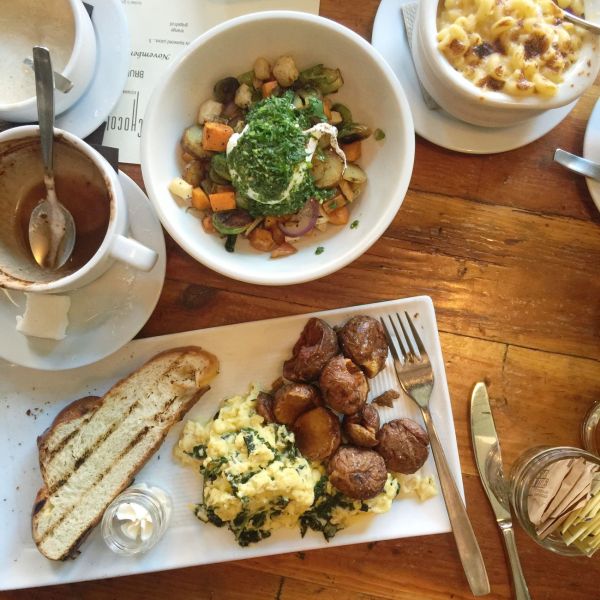 A week after I met Mindy, I arranged a brunch at Mindy’s HotChocolate for my food blogging friends that had come to Chicago fro Blogher Food. The seven of us tried a good portion of the menu, and loved every bite. It is definitely one of the best brunches in Chicago. 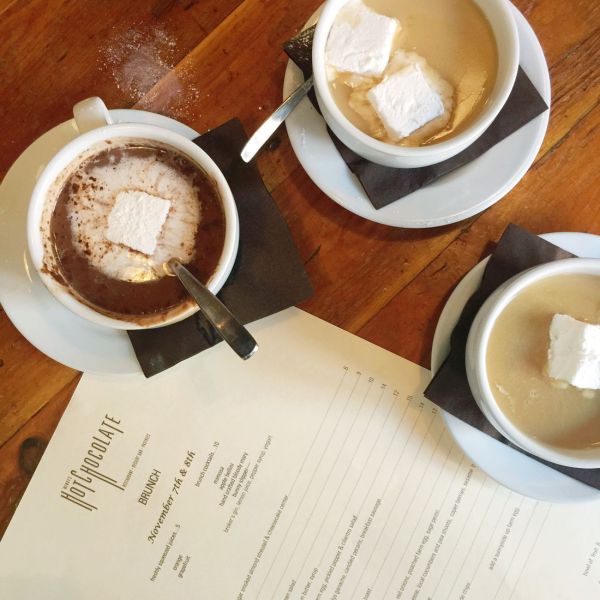 The first order of business was to order hot chocolate. There are several on the menu, including hot chocolates made with dark chocolate, milk chocolate, and chai. They are rich and creamy, and as flavorful and almost as thick as a melted chocolate bar. Mindy also sells hot chocolate mixes if you want to create the deliciousness at home. 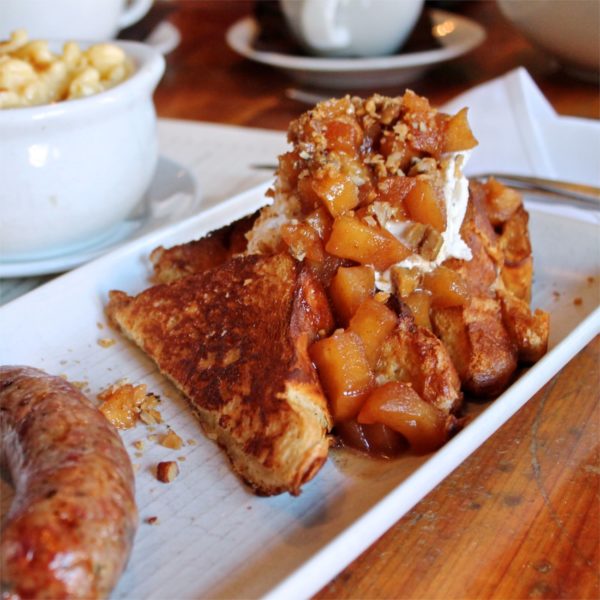 Next we ordered food. A lot of food. The brunch menu changes frequently based on what is seasonal. When we were there in early November, the French Toast was made with pumpkin brioche, caramelized apples, candied pecans and served with a side of sausage. My friend Jenny told me that her French Toast was so incredible that she actually had a dream about it that night. 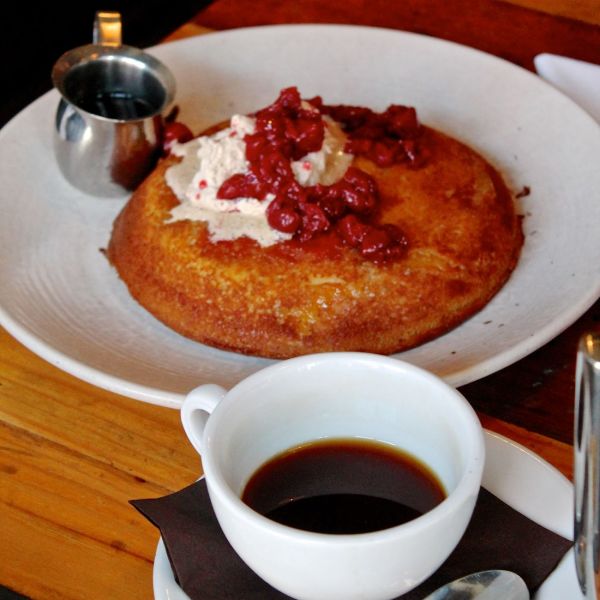 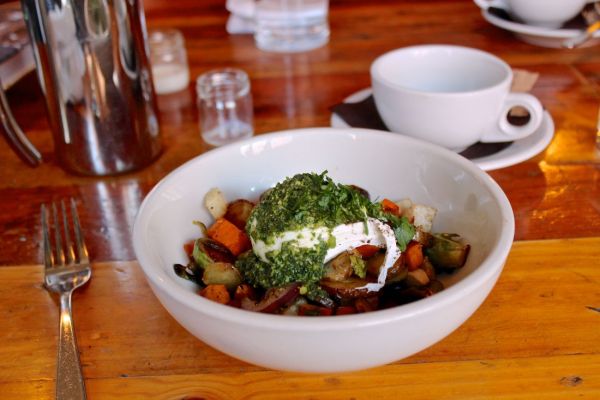 I ordered the Farmers Market Hash. Sweet potatoes, fingerling potatoes, brussel sprouts, turnips, and red onions were served in a bowl topped with sage pesto and a poached egg. One of the healthier items on the menu, the runny yolk from the poached egg mixes with the sage pesto creating a wonderful sauce for the vegetables below. 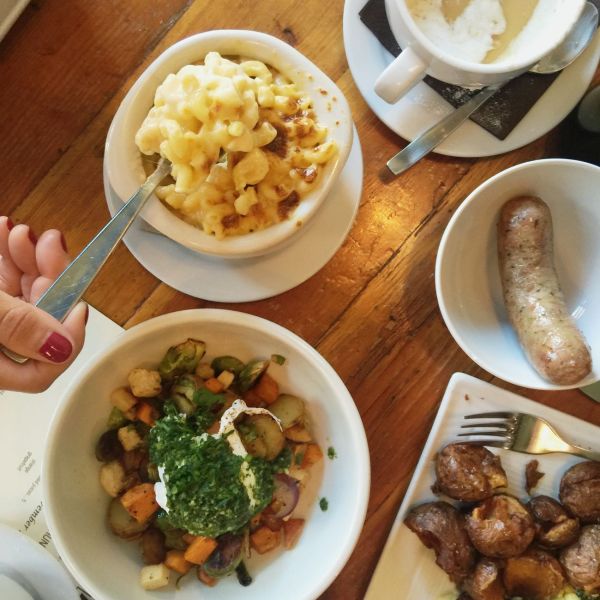 Mindy had mentioned that the Mac & Cheese is one of the most popular items on the menu, so I had to try it. It was exceptional. As the menu says, it never changes and is always a treat. Somehow the cheese seemed extra smooth, creamy, and loaded with flavor. The pasta was perfectly cooked, a surprisingly hard fete for some restaurants that finish their mac and cheese in the oven. The mac and cheese is served in a small pot, topped with a little extra cheese, and then baked until the cheese has browned, making the first few bites extra special. 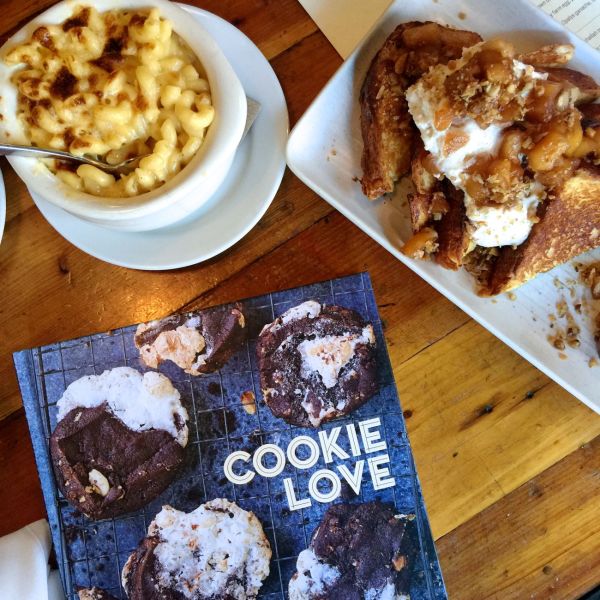 Another thing Mindy’s HotChocolate is famous for are Mindy’s cookies. Mindy received the James Beard Award for Outstanding Pastry Chef, and her cookies are out of this world. If you are too full from brunch to order dessert, they sell cookies to go. Or, if you want to try your hand at Mindy’s recipes, you can pick up a copy of Cookie Love, Mindy’s new cookbook. Mindy will even sign it for you.

Mindy’s HotChocolate is the type of place that you will want to return to again and again. It’s easy going atmosphere, stand out food, and reasonable prices are sure to win you over.

Mindy’s HotChocolate can be found at 1747 North Damen Ave, in Wicker Park. They serve lunch Wednesday-Friday, dinner Tuesday-Sunday, and brunch on weekends they do accept reservations. The restaurant is also a stop on Chicago Food Planet’s tour of Wicker Park and Bucktown.