A guide to the Maine Foods that you need to try! This list includes foods that are native to Maine and foods that are hard to find anywhere else. Some of these foods are regional and popular throughout Northern New England. 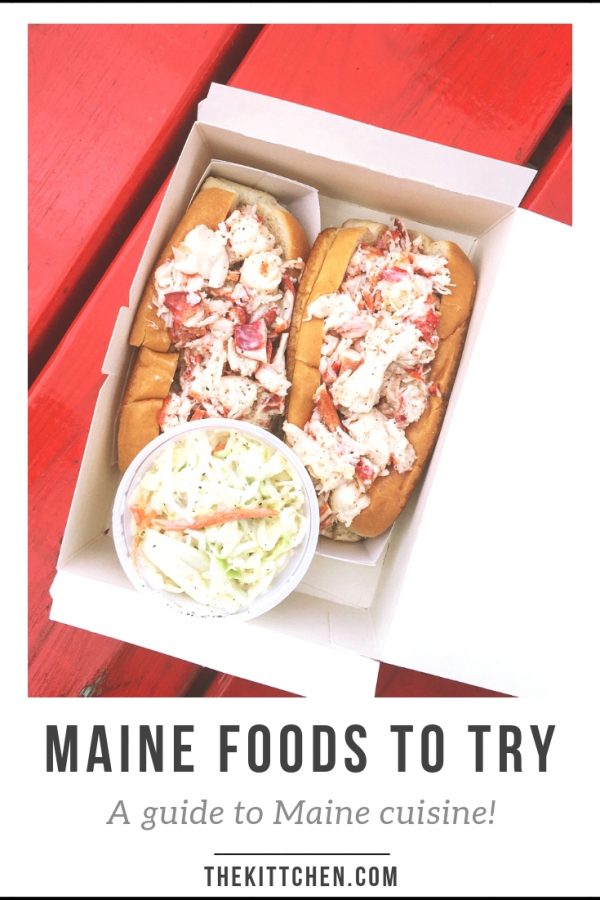 This list contains 30 Maine foods. Most of these foods are commonly found throughout the state. 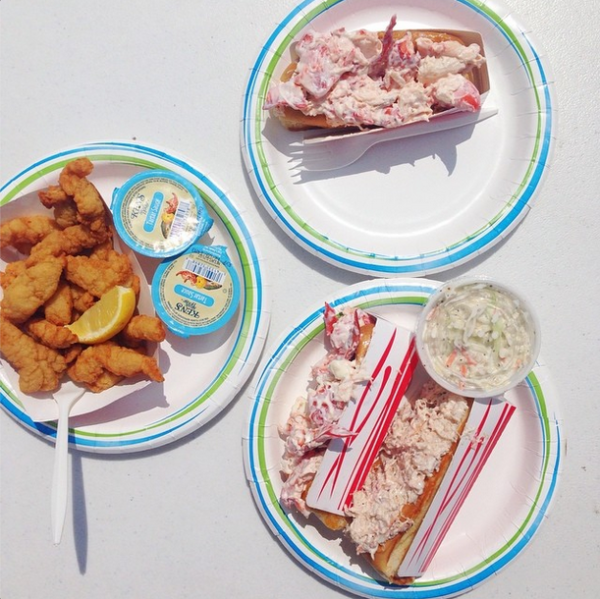 Lobster Rolls are one of the most iconic Maine foods. You will see them being served out of food trucks, at tiny roadside stands, and at most restaurants. Sometimes they have buttered lobster, sometimes they are made with mayonnaise. The Clam Shack does a combination of both. Traditional lobster rolls are served in buttered and toasted top-split hot dog buns. Butter, mayo, a touch of celery, maybe a pinch of chives – these are all acceptable and what makes some lobster rolls better than others. 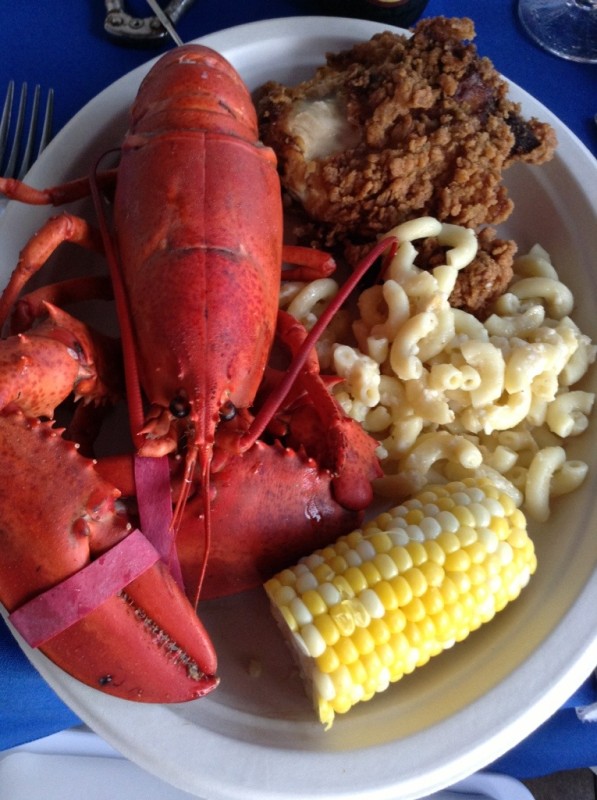 Did you know that about 90% of the country’s lobster is caught off of Maine’s coast? Lobster is probably the first food you think of when you think of Maine. Although you can find Maine lobster all over the U.S., it tastes best in Maine. That’s because in Maine lobster is super fresh (often served with 48 hours of being caught) and many restaurants steam it right in ocean water giving it extra flavor.

You will see crab cakes on the appetizer section of many menus throughout the state. Maine crab cakes are very similar to Maryland crab cakes, they are just made with Maine crab meat. The crabs native to Maine are Peakytoe Crab (rock crab) and Jonah crab. 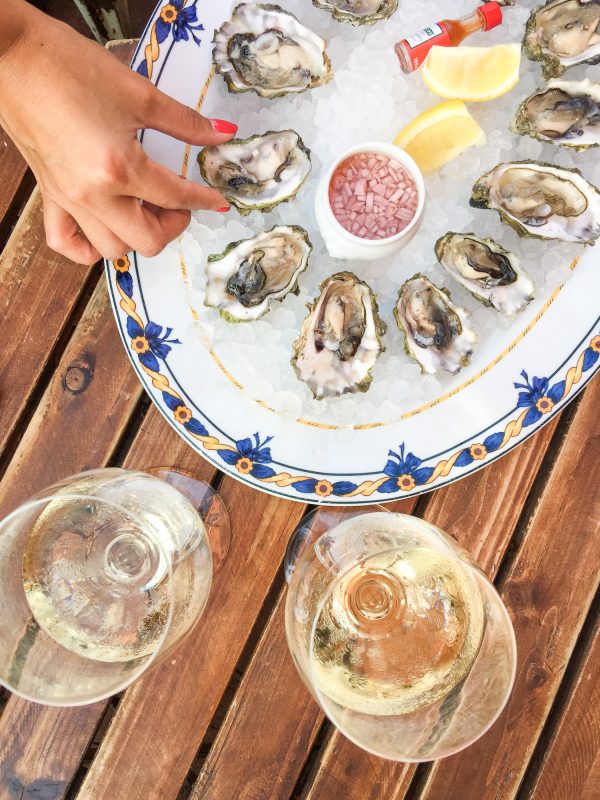 Damariscotta, in particular, is famous for their oysters which come from the shores of a saltwater river, but they are harvested from over a dozen locations in the state. Maine oysters have a distinctive briny taste since there is so much salt in Maine’s cold ocean water. Usually, Maine oysters are served raw and fresh with some lemon juice and maybe some hot sauce on the side. One of the best places to try fresh oysters is Eventide Oyster Co. in Portland.

This is super regional and traditional and features an unlikely combination of ingredients. Corned hake is made with salted pork, boiled potatoes, onion, and vinegar. My brother has a friend that makes it and he says preparing this meal is time-consuming and that it is delicious. 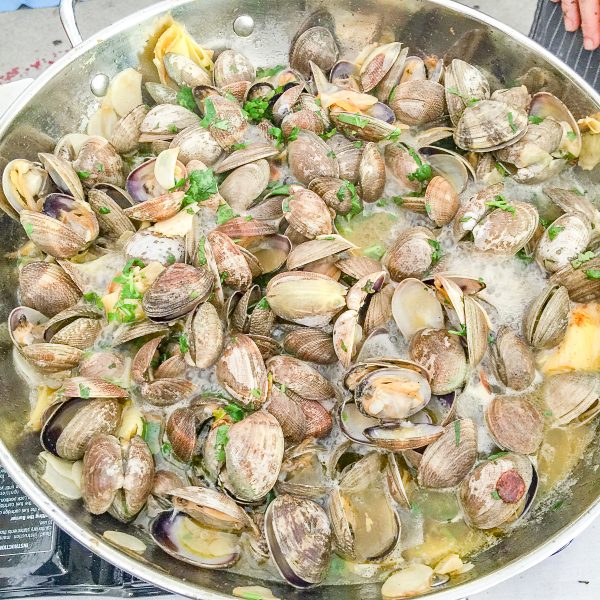 Mainers eat clams steamed, fried, and in clam chowder. Steamed clams are commonly called “steamers” and are served with butter for dipping. 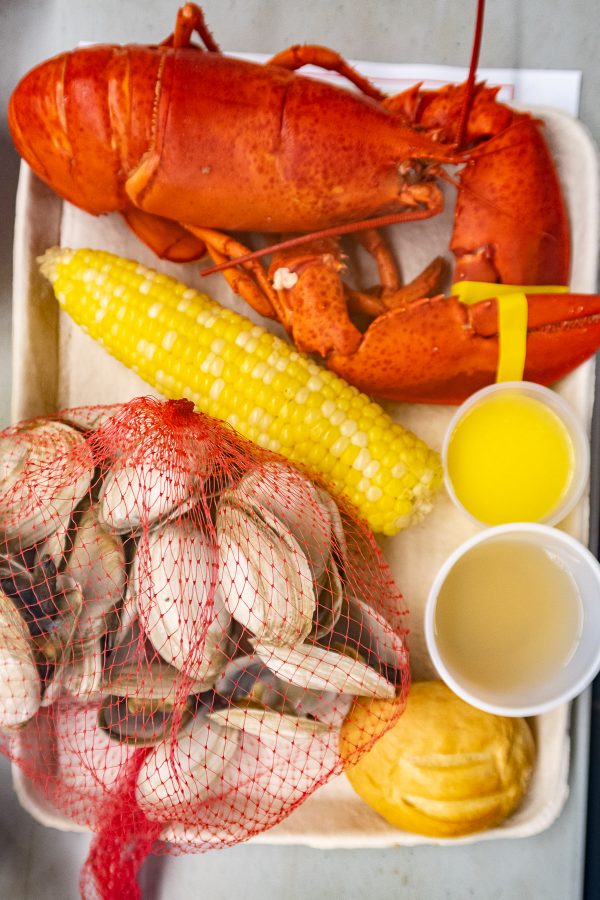 This is the most traditional way to serve Maine seafood. A New England Clambake is a complete meal consisting of lobster, clams, corn, and a potato steamed over seaweed. Usually, clam chowder is served as a first course, and blueberry pie will likely be the dessert. If you want to experience a clambake, I recommend visiting Cabbage Island Clambakes off of Boothbay Harbor. Eventide Oyster Co. in Portland has a New England Clambake on their menu but I am not sure if they steam everything in seaweed.

Clam chowder is the most common chowder you will find in Maine, although some restaurants serve seafood chowder or lobster chowder. New England Style chowder is made with cream, while Manhattan style is made with red tomatoes.

Fiddleheads are a young fern that is still rolled up. Fiddleheads are wild and grow near bodies of fresh water. Since they are wild, they need to be foraged during a short season that lasts 4-6 weeks between April and early June.

Ramps are wild leeks, and like fiddleheads, they only grow in the wild and must be foraged. The season for foraging ramps coincides with fiddlehead season and the peak of the season is in May. 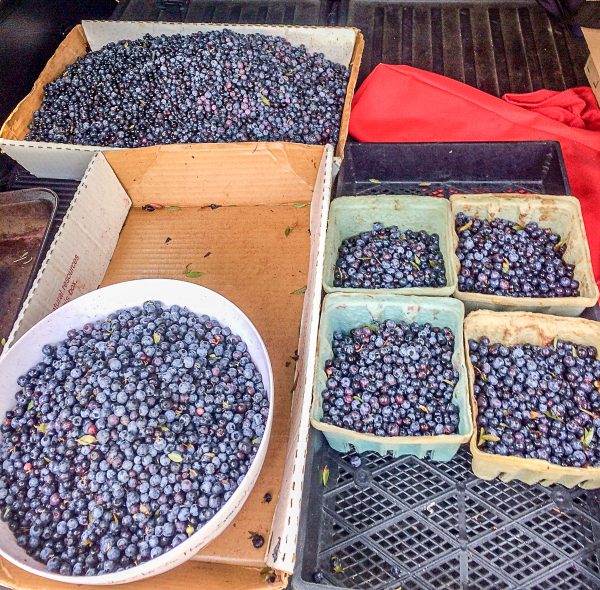 Wild blueberries are the Maine State berry and Maine produces 99% of America’s blueberries! My Dad picked a massive amount of blueberries last summer.

Maine produces over 500,000 gallons of maple syrup each year. Maple syrup season lasts for about 45-50 days between the end of February and mid-April. Maple syrup goes perfectly with blueberry pancakes.

Yes, some Mainers eat moose, but restaurants in Maine aren’t allowed to serve wild game meats due to a law from the 1850s. If you are a tourist, you probably won’t get to try moose. If you are a Mainer, you could enter the lottery for a moose hunting permit. 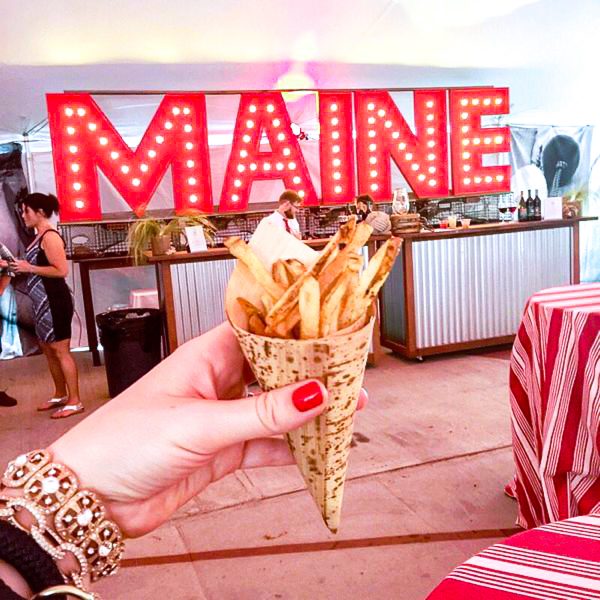 Potatoes are Maine’s largest agricultural crop! Kennebec Potatoes are known for being perfect for fries and chips.

The popular gourmet food company is based in Maine and they sell many Maine food products like blueberry jam, clam chowder, seafood rub, maple syrup, and sea salt.

Maine’s state dessert is a blueberry pie made with wild Maine blueberries. You might want to try this Maine food at a diner.

Created by Shain’s of Maine Ice Cream, a Seadog Biscuit is the ice cream dessert served at Portland Sea Dog baseball games (it’s a double-a baseball team). The “biscuit” is two chocolate chip cookies with vanilla ice cream in the middle. Don’t ask me why it’s a “Seadog Biscuit” when the team is spelled “Sea Dogs”. And in case you are curious, a sea dog can refer to either a seal or a sailor accustomed to the sea.

This dessert is a baked custard made with cornmeal and molasses. I remember making this in second grade when my class was learning about Maine. Indian Pudding has a long history. The early settlers from England liked Hasty Pudding, but the ingredients weren’t locally available. Indian Pudding is basically Hasty Pudding made with regional New England ingredients. One of the substitutions was using cornmeal instead of wheat flour. At the time cornmeal was called “Indian flour” which is how the dessert gets its name.

While blueberry pie is the state dessert, whoopie pies are the official state treat! Whoopies pies are a handheld dessert made with two small cakes, about the size of cookies, filled with thick frosting. There are endless flavor combinations, although chocolate cake and vanilla frosting are most traditional.

These chocolates are filled with a mixture of mashed potato and coconut. The candies can be store-bought but some people prefer to make them.

The popularity of Allagash helped to give Maine’s beer scene national attention. Maine has 77 craft breweries and ranks 5th in the number of craft breweries per capita in America. Astonishingly, over 55 of those breweries opened in the past 10 years. Some of the most popular breweries in Maine are Allagash, Bissell Brothers, Shipyard, and Liquid Riot.

Maine’s soda has a small cult following and it is the official soft drink of Maine. It is flavored with gentian root and is described as being bitter.

Maine’s #1 selling spirit is a brandy that is flavored with coffee beans. It was first made in the 1960s and became popular with fishermen who would add a splash to their coffee to warm them up. 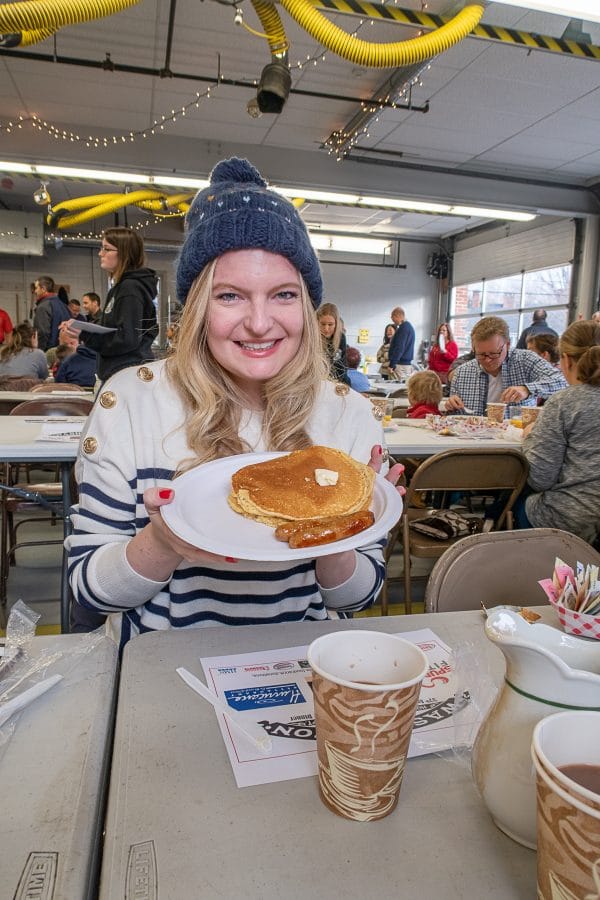 I think that Mainers like pancakes more than most other people. Maybe it is our fresh local blueberries and maple syrup. Check the schedule for any small town festival and I bet you will find a pancake breakfast, it might even be at a fire station. My sister and I love the Washington Hose Company’s annual pancake breakfast during Christmas Prelude.

Bean suppers are the counterpart to pancake breakfasts. Both are affordable meals open to the public that are often held at churches or community centers. The menu can vary, usually, it’s ham and beans or hot dogs and beans with coleslaw, brown bread, and homemade pie. 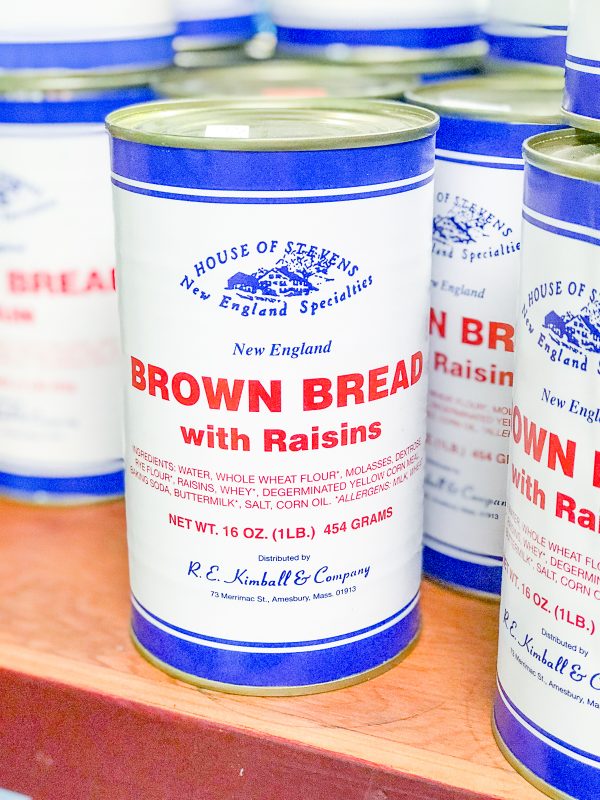 Yes, it is bread in a can. Some people make it themselves, but my mother insists that the store-bought version tastes best. The bread comes in a can because it is steamed, not baked. The bread is sweet and moist, like cake. Sometimes it has raisins. Most grocery stores and general stores in Maine should have it.

A New England Boiled Dinner is a way of making a complete meal in one pot. It consists of corned beef, cabbage, potatoes, and carrots. It’s simple, inexpensive, and an easy way to feed the entire family. Many New England families like to eat this meal on St. Patrick’s Day.

These hotdogs have a natural casing that has been dyed bright red. They are called red snappers because the casing snaps as you bite into them. Based in Bangor, W.A. Bean & Sons currently produces the locally loved hot dogs. The recipe for the “Red Snappers” was created in the 1940s by C.H. Rice Company. In the early 2000s when Tyson bought the C.H. Rice Company and took the Red Snapper off the market, the owners of W.A. Bean and C.H. Rice Company made a with Tyson so they could start producing Red Snappers together. A culinary crisis was averted. 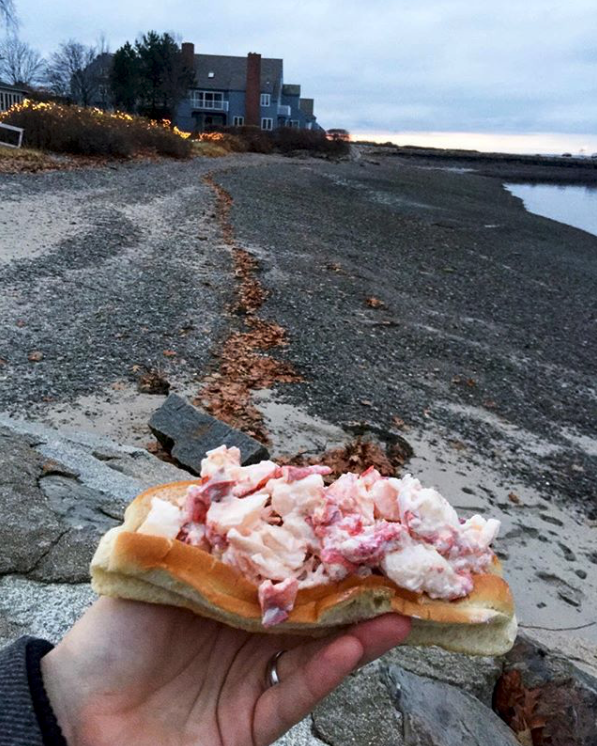 While we are talking about hot dogs, let me explain how hot dog buns are different in Maine. I had to Google this because I didn’t understand what hot dog buns are like outside Maine. New England hot dog buns are split from the top, instead of down the sides. This gives the buns flat sides. This is ideal because in Maine we like to butter the sides of the bun and then toast the bun. Both hot dogs and lobster rolls are served in these buns.

As a Mainer who moved to Chicago, let me tell you, Maine and Illinois are not aligned on what an “Italian Sandwich” is. In Chicago, it is a hot sandwich made with Italian beef and peppers. In Maine, an Italian Sandwich is a cold sandwich made with on a long soft sub roll filled with deli ham, American cheese, diced onion, pickles, tomatoes, green pepper, and sliced black olive topped with salt, pepper, and oil. Every Mainer grew up eating these. Amato’s is one of the best places to try one since that’s where the sandwich was invented – way back in 1899.

Did I include your favorite Maine foods on this list? Before you tell me that I left shrimp off the list, I did so on purpose. Shrimp fishing has been shut down in Maine since 2014 due to low shrimp numbers.