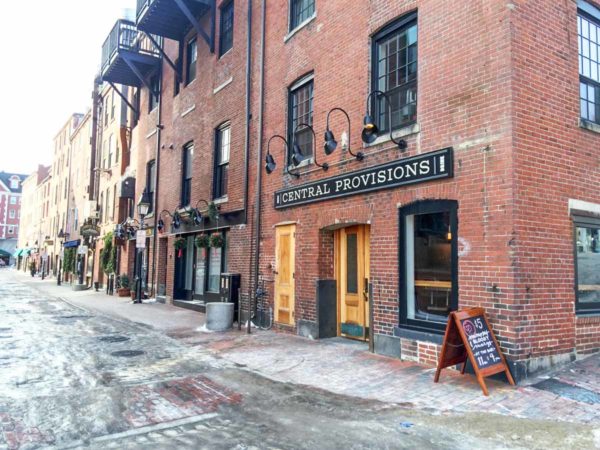 In 24 short hours, Charles and I managed to visit 9 different restaurants in Portland, Maine. We made the most of an overnight side trip to Maine’s largest city by embarking on an epic food and beer crawl. Charles and I have been to Portland many times, but we always had to worry about driving home to Kennebunkport, so this seemed like the ideal opportunity to check out Portland’s thriving brewery scene. 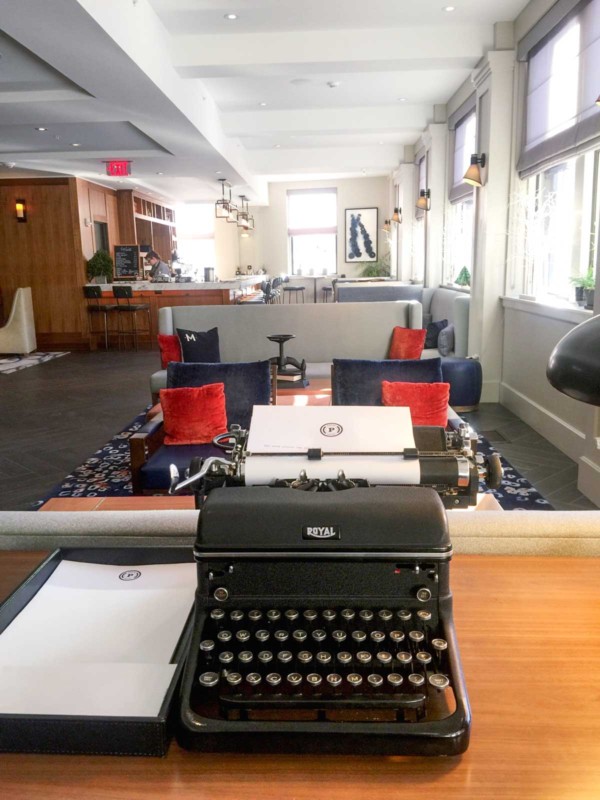 First, we checked into the Press Hotel which opened last year in the old Portland Press Herald building. It is part of the Autograph Collection’s boutique style hotels. Journalism serves as a theme for the hotel’s décor, with typewriters and typography letters seen throughout the hotel along with carpeting with letters on it. The atmosphere balances modern and welcoming. I especially loved the large scrabble board by the fireplace in the lobby. We played Scrabble and drank cocoa before we checked out of the hotel (and I won the match).

Once we settled into the room we mapped out a plan, bundled up, and set off on a 6-hour walking tour to some of the best restaurants and pubs in the city. It had been my hope that Portland would be quiet the week before Christmas making it easy to get into some of the most popular restaurants, and I was happily proven right. 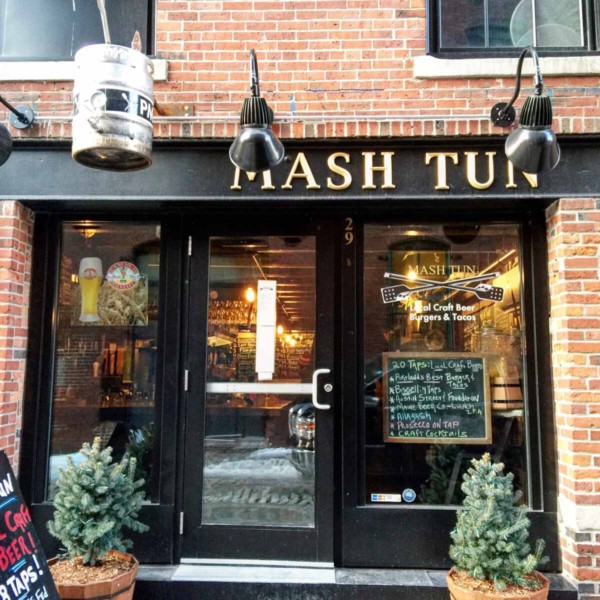 Mash Tun was our first stop. The tiny pub emphasizes local brews, and the bartender gave us some helpful suggestions on where to eat during our tour. He also shared details on a speakeasy called Lincolns – more on that later. 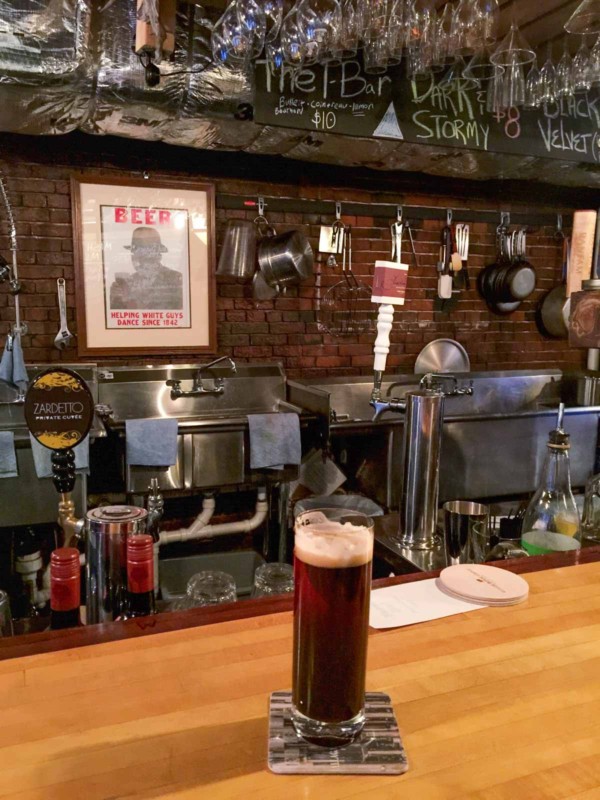 I liked Mash Tun because it’s a tiny no-frills bar where locals hang out and the beer is the focus. I had a Black Velvet (one of my go-to drinks) and Charles had a Bissel Brothers IPA.

We walked over to Liquid Riot, a brewery, distillery, and restaurant next. They serve about a dozen of their own brews, and you can build your own tasting flights. Charles loved the Kash Money IPA and I liked the Cannonball (an English Ale). You can watch the brewers in action on the other side of the glass window behind the bar. The next day I went back to pick up 32-ounce cans, called Crowlers (can+growler, get it?), of our favorite beers to bring home. 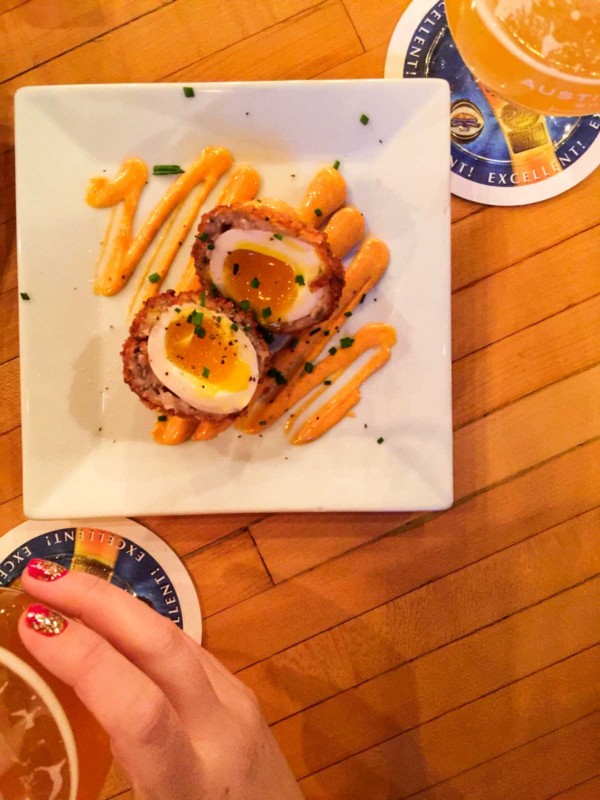 The bartender at Mash Tun had recommended going to King’s Head Pub which is next door to Liquid Riot. We had been told to order the Scotch Egg and Charles thought it was fantastic. I loved the fried pickles which came with an exceptionally delicious house-made Ranch dressing. 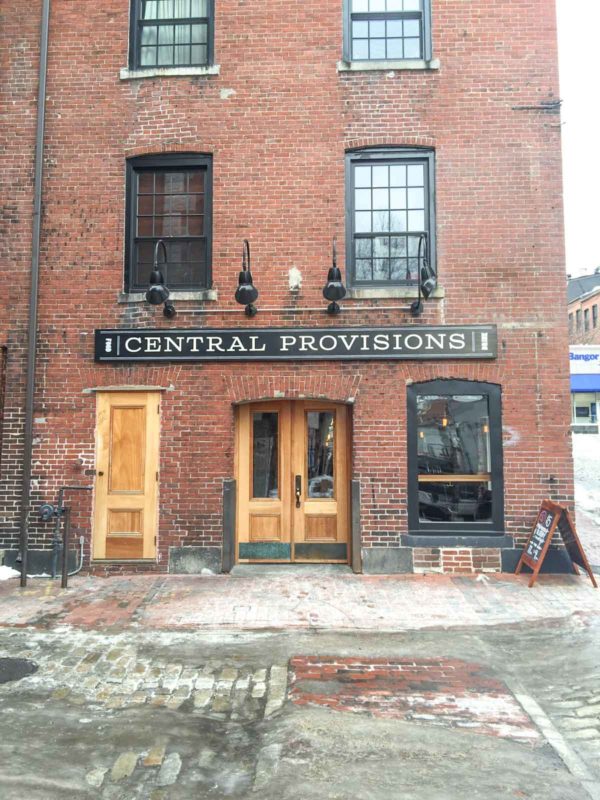 The best thing about Portland is that it is so walkable. We were never outside for more than 10 minutes. The longest walk was from King’s Head Pub to Central Provisions. Central Provisions has been on my radar for a long time, first from word of mouth from friends, and then when it was nominated for a James Beard Award. We walked right in and grabbed seats at the bar. 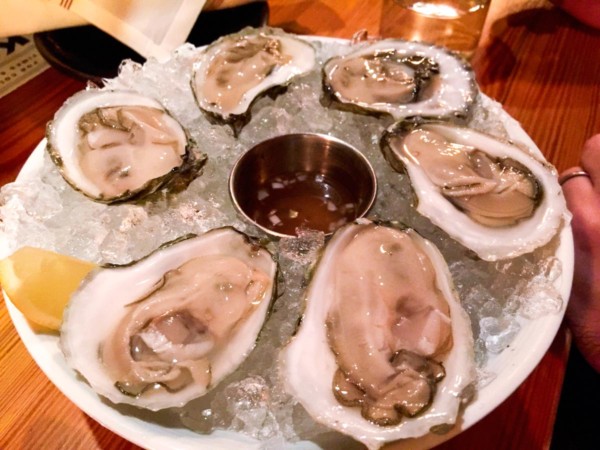 We didn’t want to order too much food since we wanted to keep trying more restaurants, and we decided to order three different things. My favorite dish was the fried sheep’s milk cheese with pears and balsamic which managed to have creamy, melty, and crispy cheese with tender pears drizzled with balsamic reduction. Charles had half a dozen oysters with the house-made sherry sauce. We also had the fried quail which was good, but not comparable to the fried quail at State Bird. 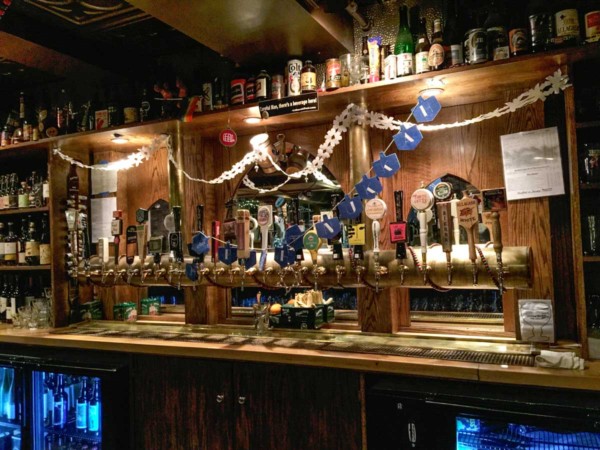 We moved on to Novare Res, a biergarten that my brother and his girlfriend recommended next. They have one of the most extensive beer lists in Portland, and it has made a couple lists of best beer bars in the country. The beer list has selections from all across the globe, and there is a separate list of local brews. In the summer the large outdoor biergarten is the place to hang out. 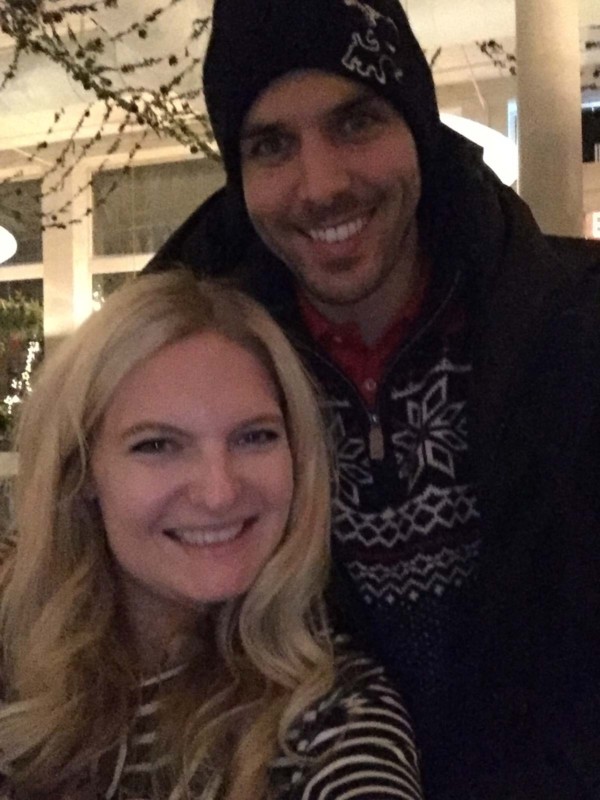 Somewhere in our journey (parts are fuzzy) we were told to go to Portland Hunt and Alpine Club and to order the charcuterie. We did, and it was an outstanding charcuterie board with locally made cheeses including the creamiest blue cheese. The restaurant describes its cuisine as “Scandinavian fare” but it also has playful options like bottles of champagne served with popcorn. 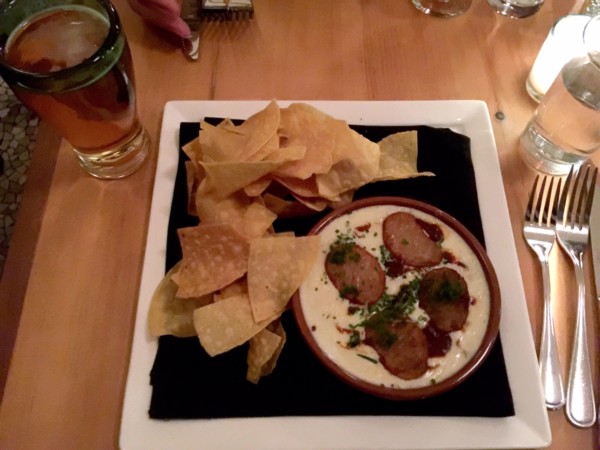 The folks over at Portland Hunt and Alpine Club sent us over to Sonny’s next, where we focused on food. I had a delicious queso dip served with tortilla chips and Charles had a beef ramen.

Our night ended at Lincolns, a speakeasy that the Mash Tun bartender had given us very specific instructions to locate. We were a bit unsure, but we encountered another couple trying to find Lincoln and worked together to gain entry into the bar. Wondering why it’s called Lincolns? Well, every item on the menu is just $5, and you have to pay with cash. Lincolns doesn’t have an online presence at all, and you need to be given pretty specific instructions to find it. Look for a pair of red double doors on Market Street between Milk Street and Fore Street. Enter through the red doors, go downstairs, find the bookcase and pull it to reveal the entrance to the bar. I wasn’t allowed to take any photos for you, but we loved Lincolns. 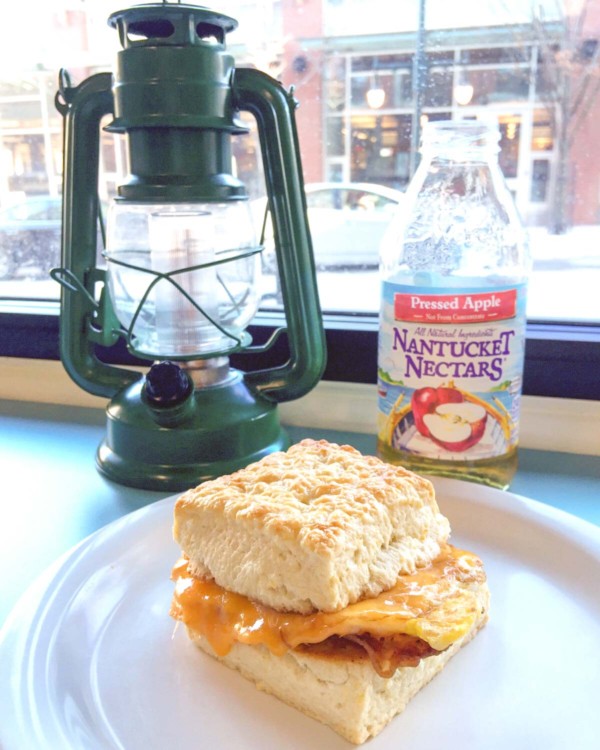 The next morning an egg sandwich from Dutch’s with a side of apple juice cured my hangover. Charles thought that the idea of spending a night in Portland was silly at first. I understood, we left our room at my parent’s inn to pay to stay elsewhere. We had so much fun though! We know Kennebunkport like the back of our hands, and there isn’t anything new for us to explore here. Portland was full of new places for us to visit and it was a really great 24 hours. If you happen to be heading to Portland, I recommend this itinerary. If you are ambitious, do it in one night, otherwise split it in half!

If you want to read about 2014’s Portland Food Crawl, here is a link. Just a heads up that it is not a walking tour – but it features a completely different set of restaurants.