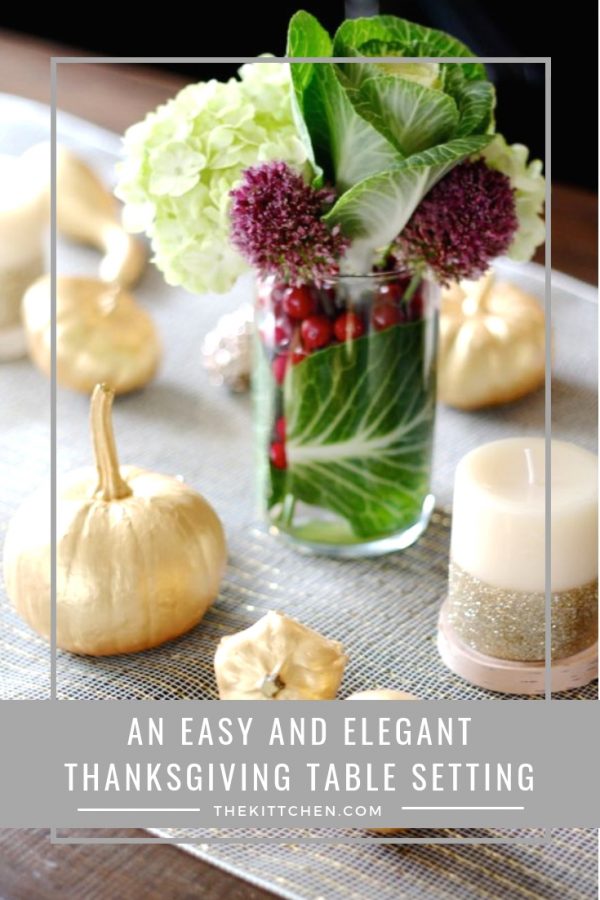 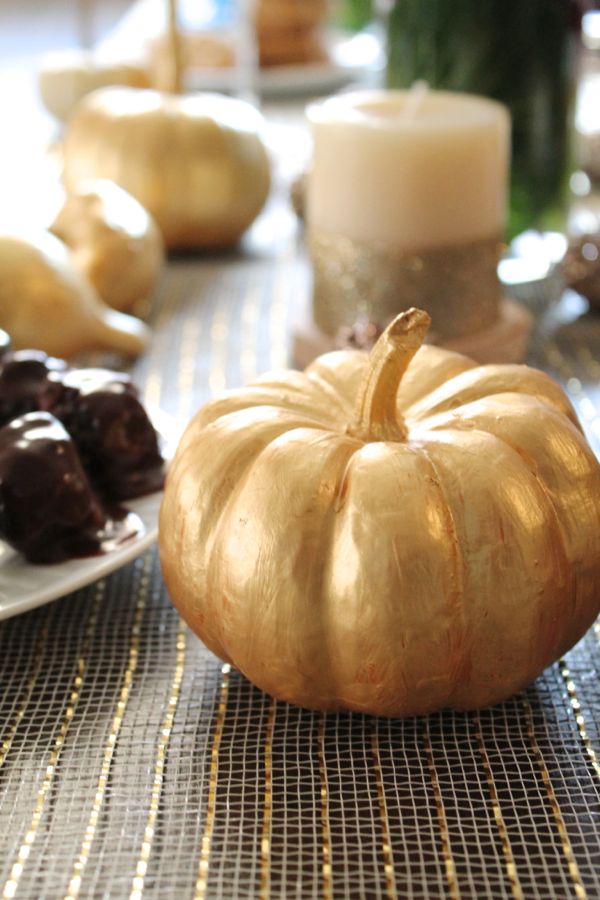 Thanksgiving is a pop the champagne and break out the china affair. I created an easy and elegant Thanksgiving tablescape that is worthy of my absolute favorite holiday. There are several DIY elements to this tablessacpe that you can mix and match with items you already own. I chose to focus on a neutral palette of whites and golds with hints of green and a touch of red. It’s formal, but not fussy, and many of the items could be reused as part of your Christmas decor. 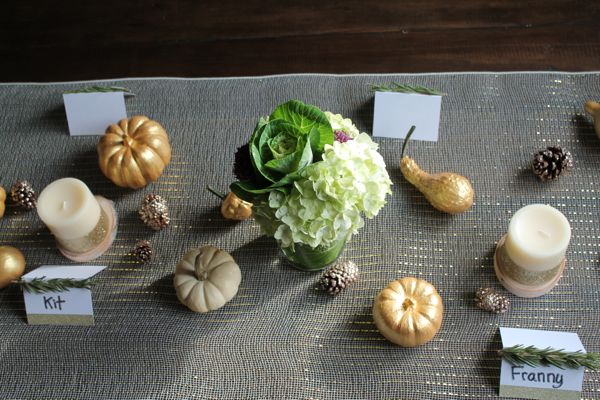 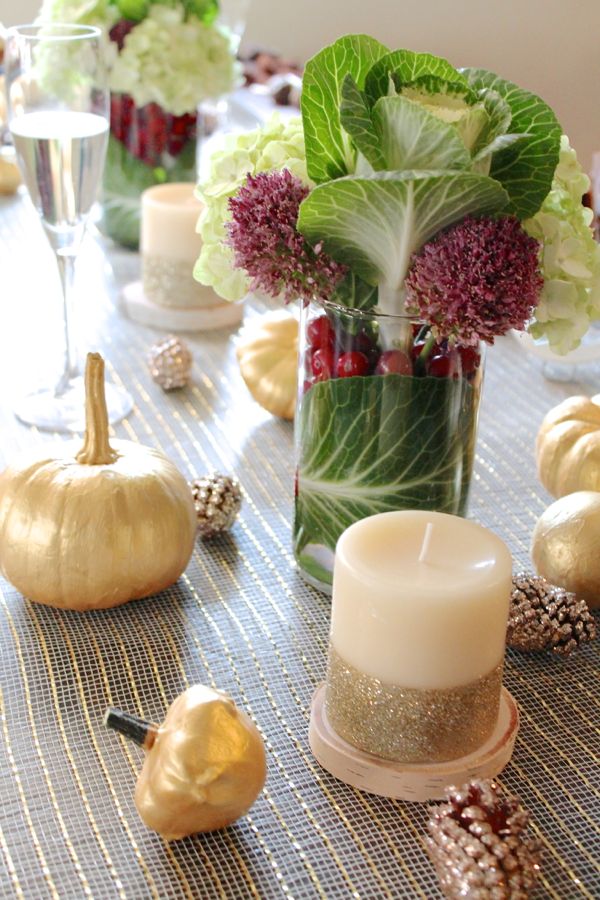 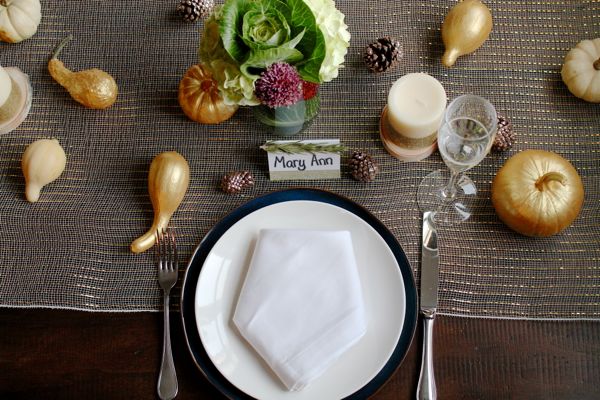 Almost everything was purchased at Michael’s including the “holiday mesh” that I used as a table runner, the glitter covered pinecones, the birch coasters, paint, candles, and glitter. The holiday mesh cost less than $10 for 30 feet, and it can be use to decorate holiday wreaths after Thanksgiving. It can be used with or without a tablecloth. 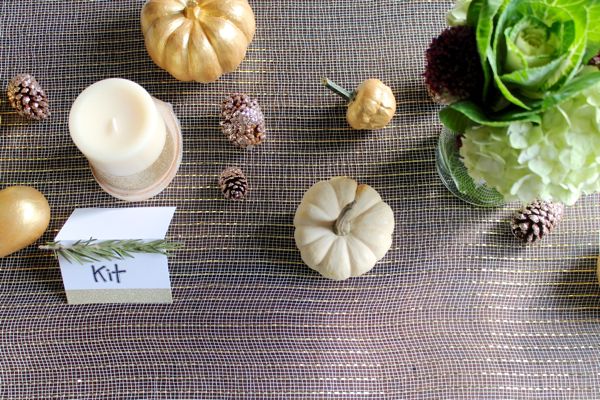 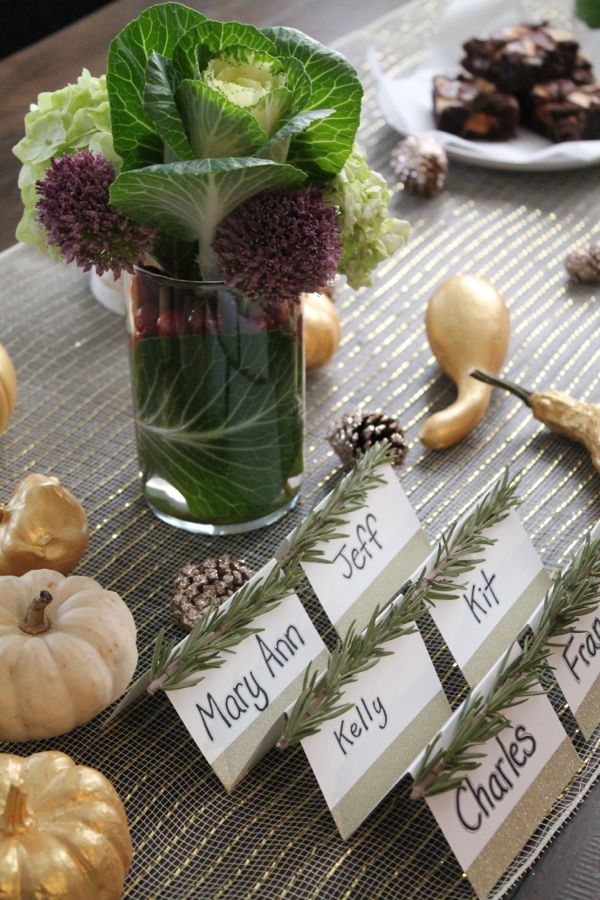 I purchased a variety of gourds at a garden store (Old Town Garden). Stores in Chicago can’t sell spray paint, so I individually painted the gourds. Spray paint would have been much faster and easier. I left the green stems on some gourds unpainted. I also chose not to paint the white gourds since they already matched the white and gold color scheme. 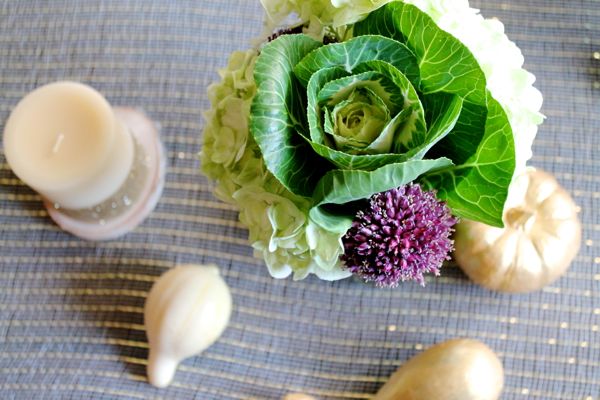 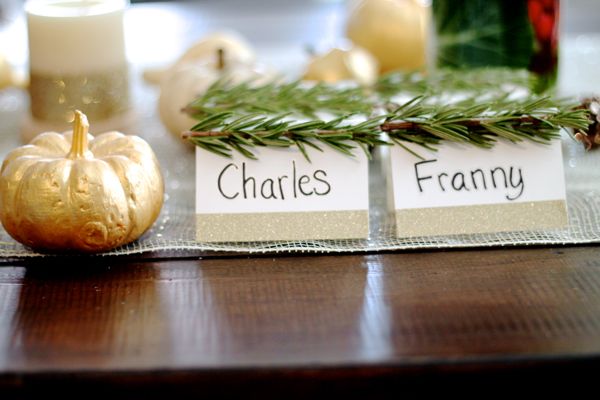 I added glitter to the candles. This was really simple – just use painters tape to divide the candle in half. Spread a layer of glue on the bottom half of the candle. Then sprinkle generously with glitter – do this over some newspaper for easy cleanup. Set the candles on birch coasts. Use unscented candles because the fragrance of scented candles may not mix well with the food served at dinner. 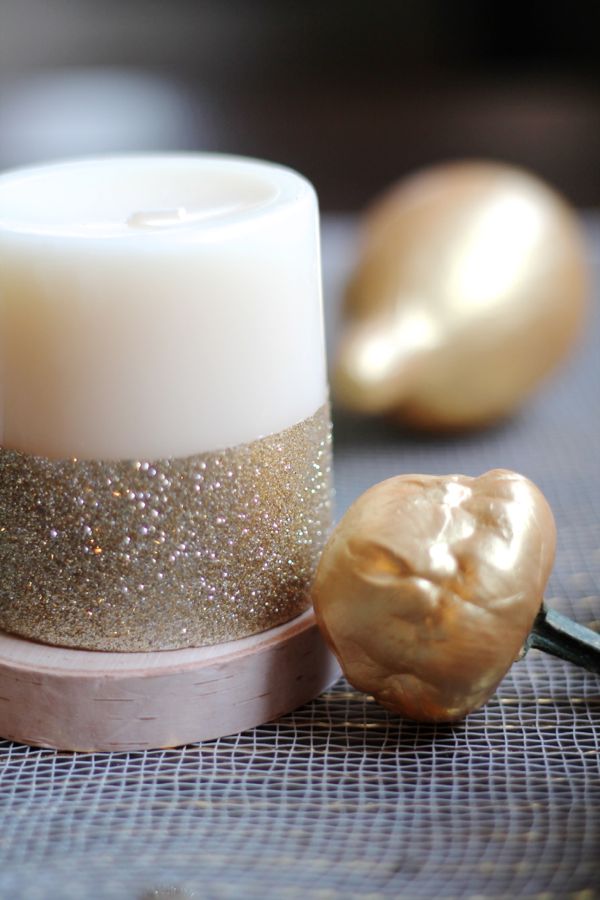 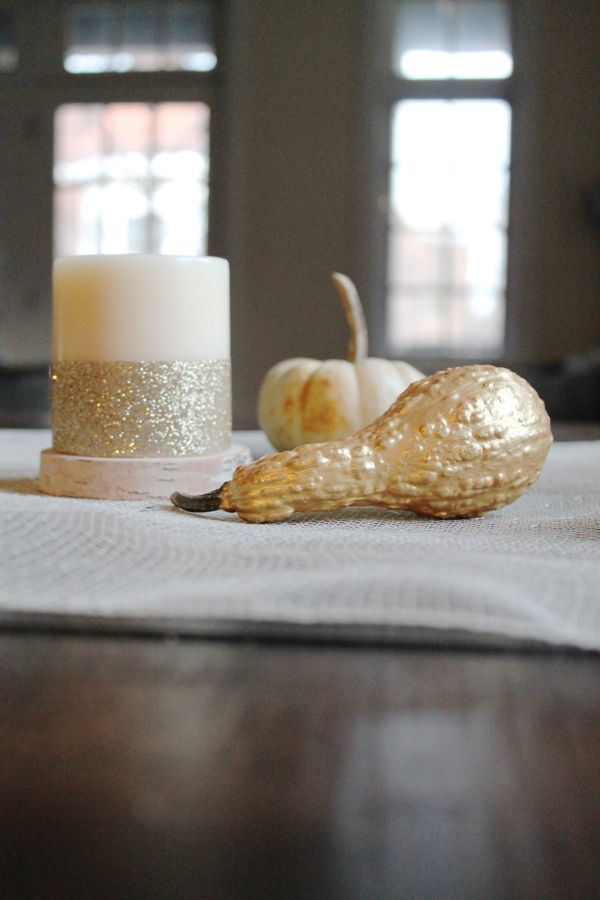 The flower arrangements were made with ornamental kale and cranberries. The ornamental kale (purchased at Whole Foods) was huge, so I pealed off several of the outer leaves. I then placed two of the big leaves in the bottom of the vase. I added water and a generous amount of cranberries, and then placed the kale and flowers in the vase. The cranberries add a nice pop of color and they make a nice addition to a Thanksgiving or Christmas floral arrangement. 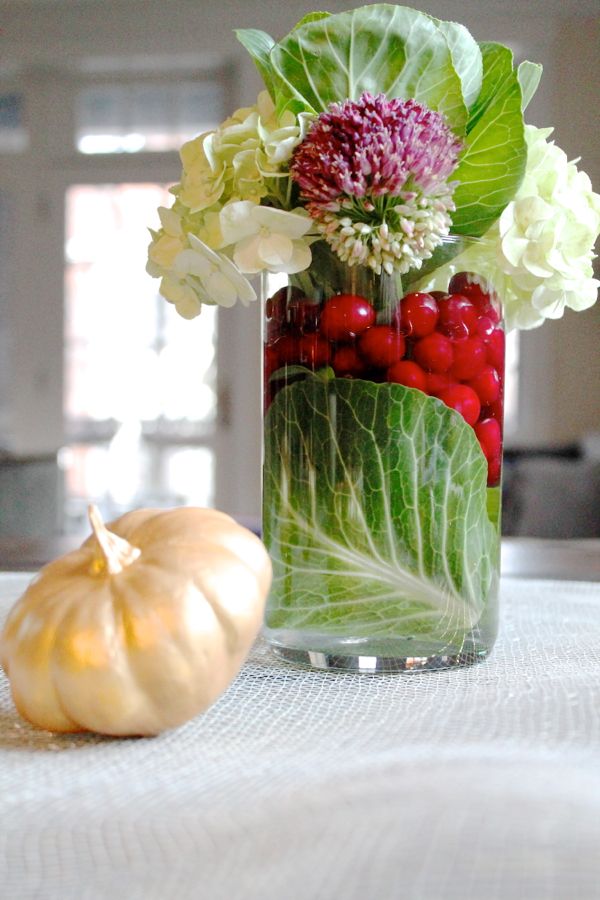 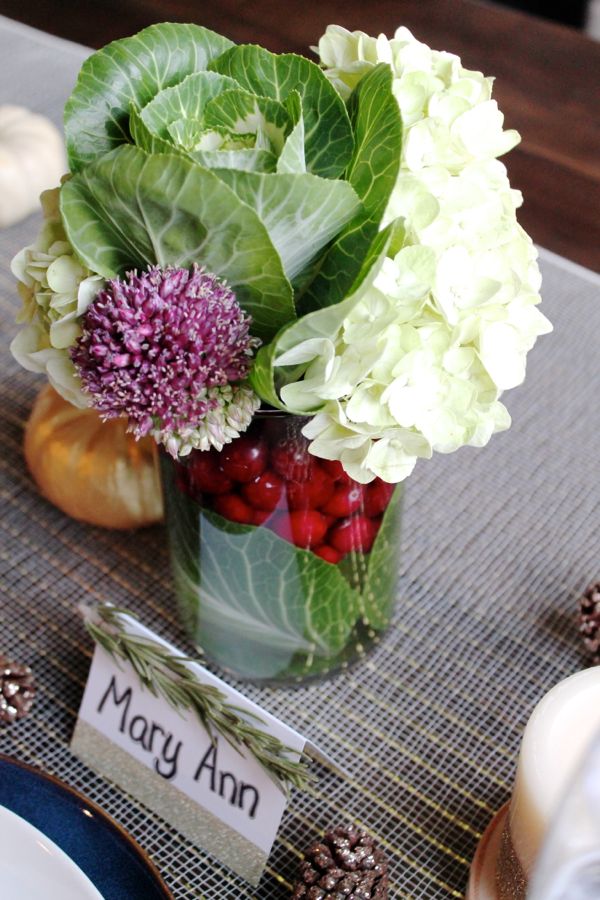 The place cards were inspired by some that I saw on Pinterest. I bought plain place cards and glitter tape at Paper Source. I wrote names with black sharpie, outlined them with silver pen, added a strip of glitter tape, and then I sewed on a bit of rosemary. Adding the rosemary was a bit tedious, but I loved the final look. Using hot glue would be a faster alternative to sewing the rosemary on the place cards (I just don’t have a hot glue gun). 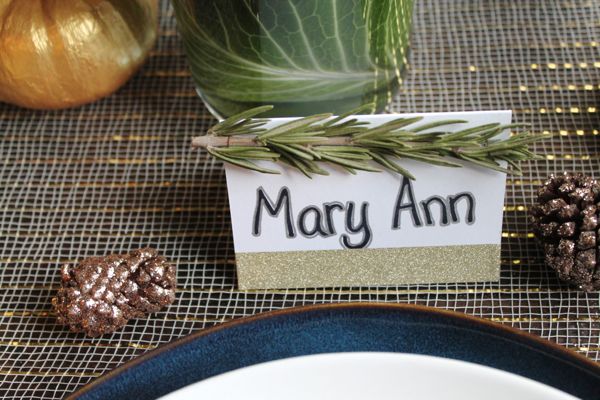 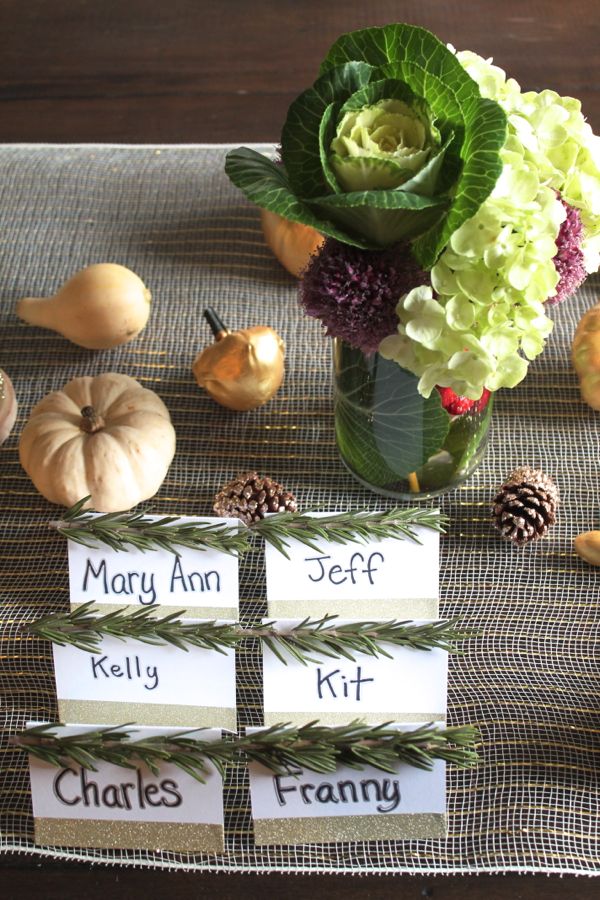 If you wanted to keep it simple, a table runner, some glitter candles, and a couple of small flower arrangements are easy ways to dress up your table for the holidays. Have you already started making your Thanksgiving decor and menu plans? Don’t worry, there are more Thanksgiving posts coming your way soon.