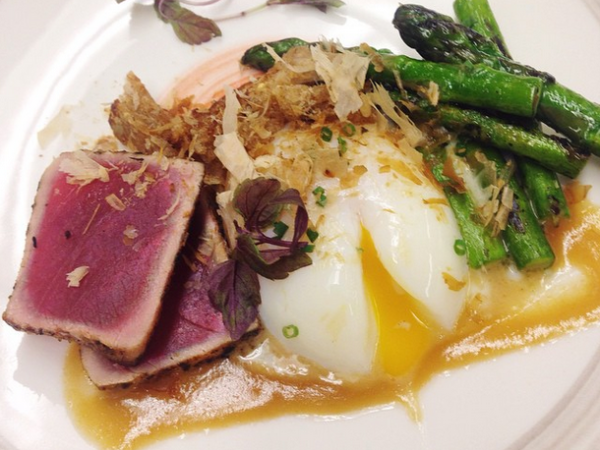 Deca, the restaurant at The Ritz-Carlton Chicago, is a Michelin Bib Gourmand winner and they recently welcomed Executive Chef Martin Knaubert who previous worked as a chef at The Four Seasons kitchens all over the world (The Four Seasons owns The Ritz-Carlton Chicago). He was in Berlin, Florida, Hawaii, China, Syria, and Canada before coming to Chicago. He recently introduced a new menu at deca and it includes influences from all around the world. I was one of a very lucky few who was invited to dine at the Chef’s Table on it’s first night.

It was an evening that I will never forget, and since they let me sign the wall with a permanent marker, the Ritz-Carlton won’t be forgetting it either.

Chef Knaubert’s new menu caters to both the meat and potatoes types and adventurous foodies. The menu has classics like filet mignon, rack of lamb, and pork tenderloin along side the more creative dishes that I got to taste. 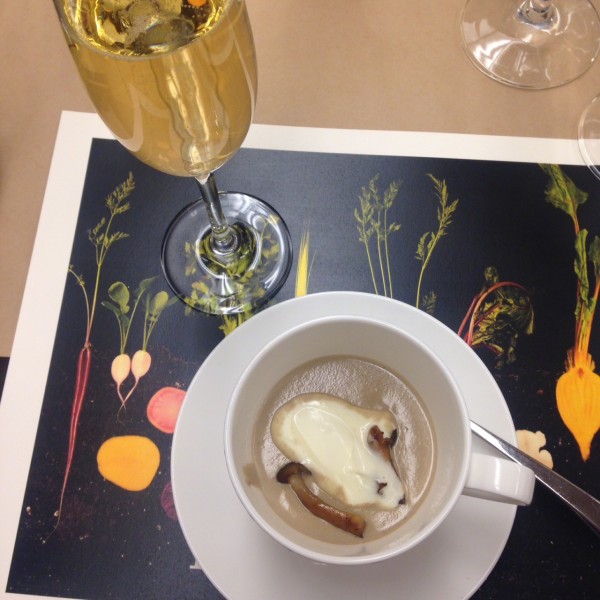 Upon arriving, we were lead through a maze of kitchens, and finally to the quiet kitchen in the back where we were greeted by Chef Knaubert and glasses of champagne. Then the first course, a creamy mushroom soup, arrived. It was filled with large chunks of whole mushrooms and was topped with a bit of creme fraiche which lightened it up. 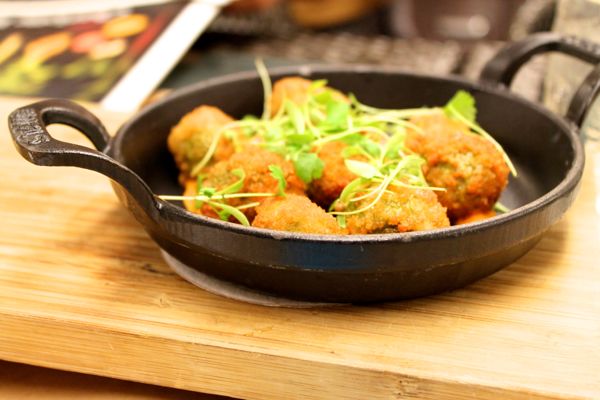 After the soup, it was time for a snack. I was surprised that I liked the fried olives as much as I did. I am usually not a big fan of olives, but, I love just about anything that has been fried. The olives were stuffed with veal and arugula, and a smoked paprika aioli was served on the side. The slightly spicy aioli really brought everything together, and balanced out the olive’s strong taste. 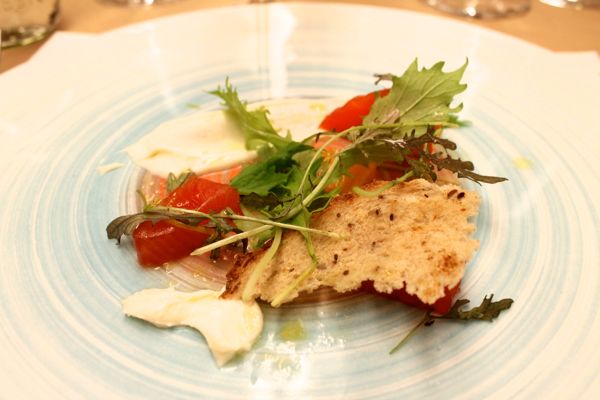 The beautiful plates used to serve the trout had just been flown in from Germany that day. 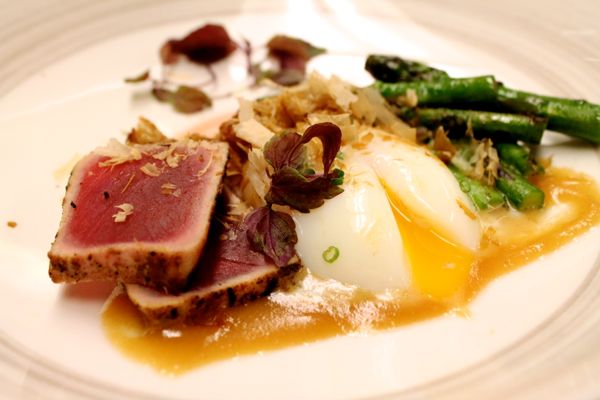 My favorite dish of the evening as the Charred Asparagus with Blackened Tuna, Bonito, Miso and a Poached Egg. The tuna was superbly cooked- blacked on the outside and rare on the inside. The poached egg, and runny yolk added richness, while the asparagus gave the dish an earthy taste and more crisp texture. This dish was interesting without being over the top, and showed skill at balancing vastly different ingredients. 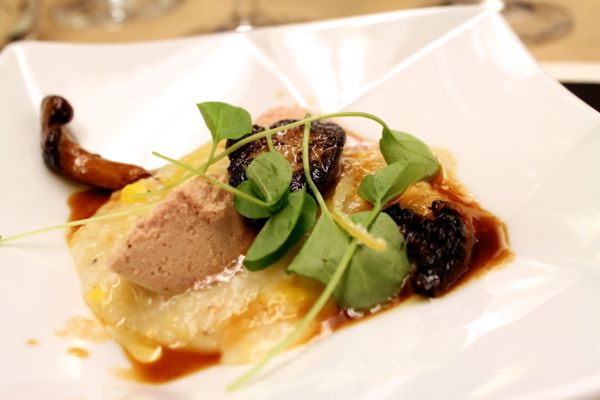 The Foie Gras was another stand out dish, The foie gras was served two ways, both pan seared and as a mousse. I preferred the texture of the pan seared foie gras, and I though that the act of pan searing made it a bit more flavorful. It was served on a bed of creamy grits with matsutake mushrooms and candied lemon. The candied lemon added sweetness and citrus and took the dish from great to outstanding. I am seeing grits more and more lately, and I am definitely a fan. 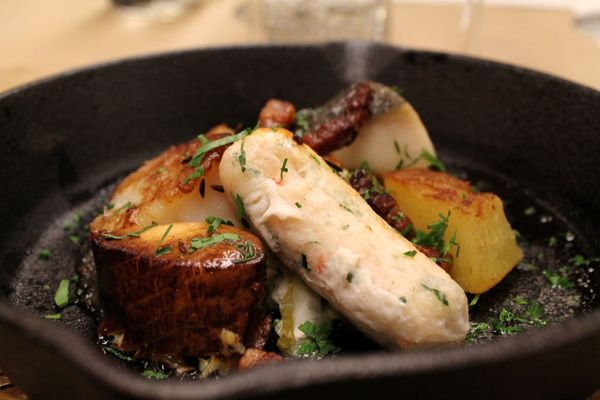 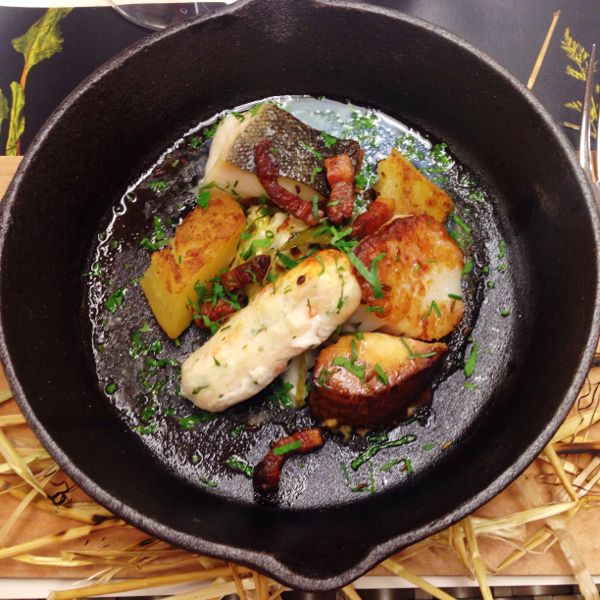 The Choucroute Garni au Mer was Chef Knaubert’s creative reinvention of a traditional French dish. Chef explained that Choucroute Garni is usually made with sauerkraut and left over meat – including the organs, but his version is made with sauerkraut and seafood. The presentation was awe inducing. The Choucroute was served in a cast iron skillet, upon a bed of lightly singed hay.
The most ingenious element of the Chourcroute Garni au Mer? The lobster sausage. As a Mainer I was a little skeptical of this at first fearing that the process of transforming lobster into sausage would change it’s taste and texture. However, I was pleased to discover that lobster sausage is just as succulent and tender as the lobster straight from the shell. But the choucroute garni included far more than just lobster, the sauerkraut in the center of the skillet was the best I’ve had, and the sable fish, smoked blacked cod, and scallops were all allowed to stand out from each other to be enjoyed individually as to not compete with each other. The dish was finished with a sprinkling of thick crunchy bits of bacon. 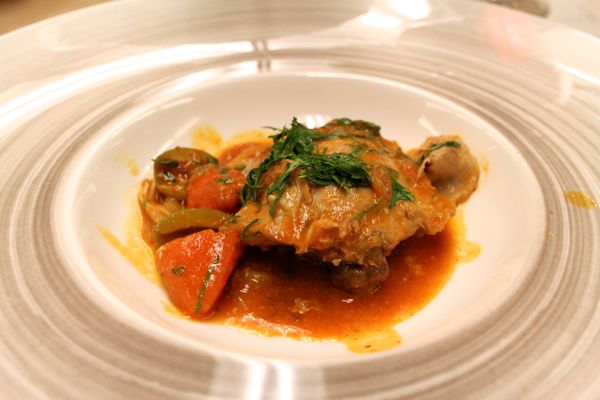 After attending some of the best food events in Chicago, I was left wondering why no one was doing anything interesting with chicken. I know that might sound silly, but the pork trend has gotten a little out of control lately, and doing something really great with chicken would add some much needed variety. Chef Knaubert must have heard me, because his Chicken Tagine with Harissa and Organic Vegetables was just what I have been craving. Chicken Tagine is a Moroccan casserole made in a dish called a tagine, and it has a flavorful broth and large chunks of vegetables. At deca, the Chicken Tagine is available in two sides, a whole chicken, and a half chicken.

When he introduced this dish, Chef Knaubert said that he was very inspired by his time working in the Middle East and he thought that part of the world has the strongest food culture. 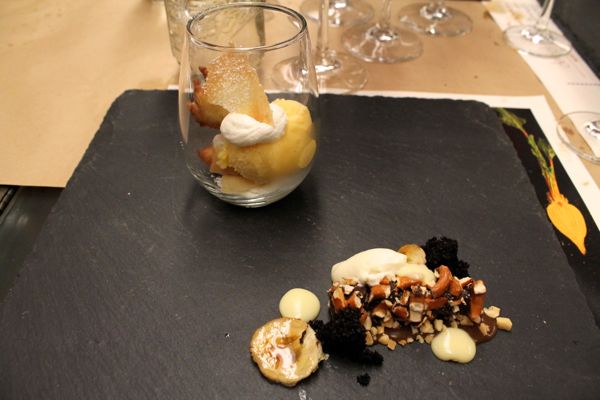 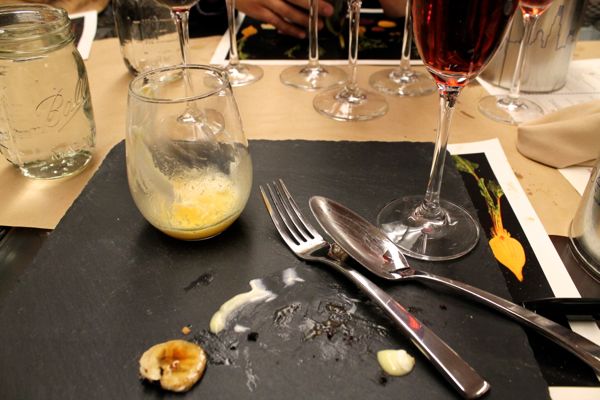 The meal ended with a duo of desserts. The most memorable was the fried lemon curd. It was served with a lightly fried dough and I enjoyed the contrast with the thick creamy lemon curd.

The chef’s table at deca can be reserved by calling deca. The Chef will work with guests to create a custom menu. The Chef’s Table at deca would be a fitting location for a special celebration. Deca also has a full schedule of events for the holidays, including Thanksgiving dinner, brunch on Christmas Eve and Christmas, and a New Years Eve Party.

Chef Knaubert said that he is finding inspiration in Chicago’s burger scene and that he plans to put a burger on deca’s menu that will be one of the best in the city. I think I might need to stop in to be the judge of that. I was so impressed by Chef Knaubert’s love of food and the amount of passion he put into creating his first menu for deca.
deca is located at 160 East Pearson Street on the 12th floor. They do accept reservations.