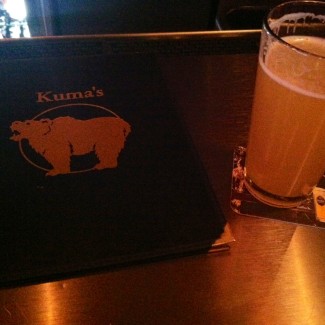 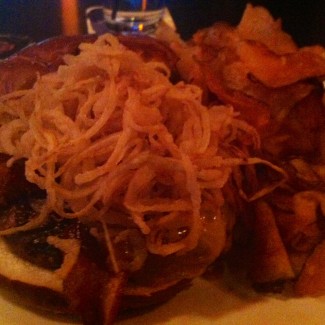 When Chicagoans heard that The Counter was closing our hearts broke – for a second. Then legendary burger joint Kuma’s Corner announced they were moving into the vacant space with Kumas Too and we all got excited, and hungry. My friend Adrian is always talking about Kuma’s Corner but it isn’t very conveniently located for me, and the lines are usually quite long. Kuma’s Too is on Diversey, in Lakeview/Lincoln Park, and is just a short walk from the Diversey Brown line. It is across the street from Next Door Chicago where I attend food blogger meet ups, so before Tuesdays meeting I stopped in for dinner.

Apparently Tuesday at 6:15 is the perfect time to go to Kuma’s. From what Adrian has told me and from what I have read on Yelp people often have to wait a while to get a table, but it wasn’t very busy when I arrived. By the time I left an hour later the place was packed and there was a long line.

I am going to be totally honest. I very rarely order a burger at a restaurant. If I am going to have beef I would rather have filet. I have a burger maybe twice a year, I am just not a burger person. Let’s rephrase, I wasn’t a burger person until I discovered Kuma’s. I could eat Kuma’s again and again. It lives up to the hype.

I ordered an Allagash White (my favorite beer) and the Mastadon – a 10 ounce burger topped with cheddar cheese, bacon, barbeque sauce, and fried onions. Barbeque sauce on a burger! Why hadn’t I thought of that? It is so perfect, especially with the cheddar, bacon and fried onion. Kuma’s is very generous with the toppings – each burger has about 3-5 toppings and they are piled very high. Eating these burgers is somewhat challenging because they are so thick, and the topping want to spill out.

The burgers come with your choice of fries, homemade chips, or a salad (for a little extra). The bartender recommended the chips, which were good but not earth shattering. The burger was the star of the plate. It was cooked to a perfect medium as I had requested. It was gigantic, but oh so good, I kept eating, and eating until I could not eat anymore. I felt like a total loser for only eating half of my burger.

The menu very clearly states that there are no vegan options, but you probably wouldn’t bring a vegan to a burger joint anyway, right? They do offer veggie burgers and turkey burgers. Other offerings include build your own mac and cheese and several salads. It seemed like most people were ordered burgers, and I enjoyed watching the giant burgers come out of the kitchen.

The ambiance at Kuma’s is very different from the Chicago restaurants I have written about previously. It definitely isn’t a place to go on a romantic date. I would describe it as hipster/metalhead. Heavy metal music is blasting. The bartenders are heavily tattooed and have rainbow colored hair (not that there is anything wrong with that). It is a bit loud – this is something often mentioned in the Yelp reviews. It is a beer and burger joint. It isn’t fancy. You will likely have to wait a while for a table. These are things I want you to know before you go. But you should go. The burger was probably the best I have had. Ever.

Kuma’s Too is located at 666 West Diversey on the boarder of Lincoln Park and Lakeview in Chicago.

leaner by the lake

I'm a Chicago gal as well and have heard RAVE reviews of Kumas from good friends. Though I tend not to eat meat, I think this is the sort of place to make a compromise for. Thanks for posting the review!

Have a good weekend! Stay warm!

Yes, Kuma's is definitely a place to compromise for. I have been to DMK - I used to live just around the corner. I liked DMK but thought it is weird that they don't ask what temperature you would like your burger - they just cook them. Yes, the sweet potato fries were awesome!