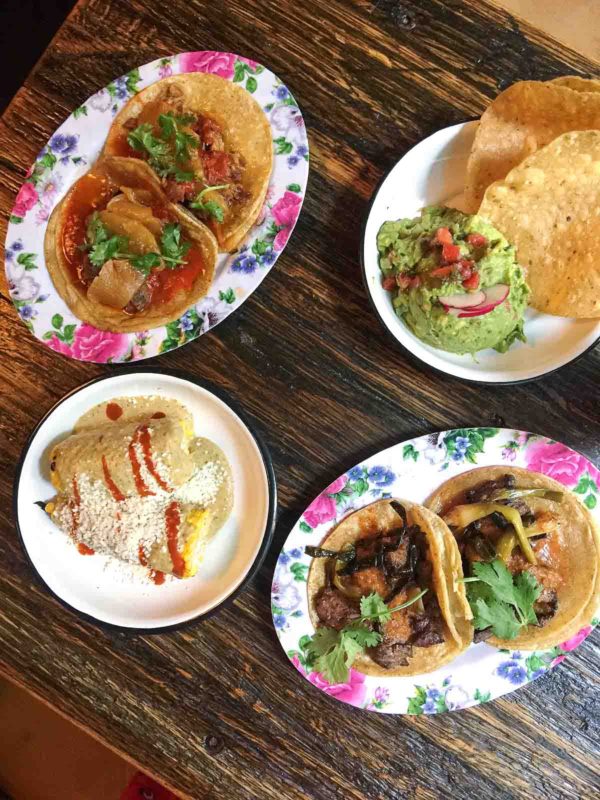 Tacos, sangria, and a good friend – suddenly a normal Tuesday was transformed into a fun girls night when I met my friend Jenny for dinner at Broken English Taco Pub. The freshly opened bar/restaurant in the Loop is in a prime location for a post-work happy hour. The food has big emphasis on drinks with a large list of tequilas in addition to a cocktail menu. And when it comes to the tacos, Jenny had some bold words saying that she thought they were just as good as Big Star’s. 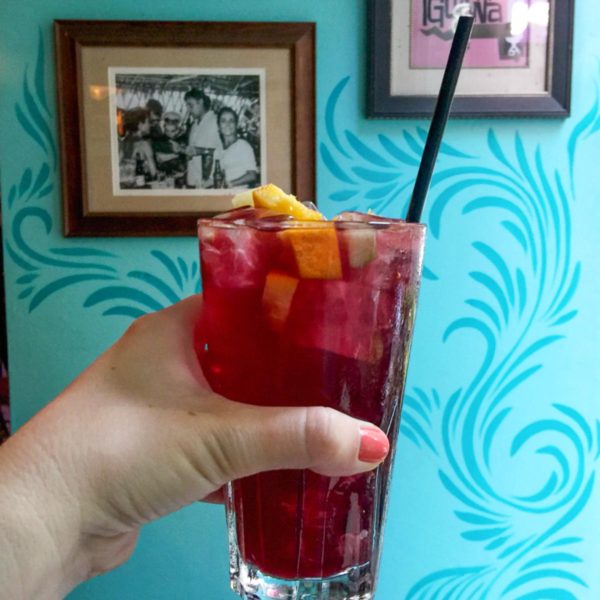 We started off with a round of drinks and some guacamole. I had the sangria which was made with a touch of earl grey tea that mellowed out the fruitiness of the drink. Jenny picked the wildest cocktail on the menu, the Rattlesnake Piñata, a tequila cocktail with tricky pear puree, maraschino liquor, yellow chanteuses, lime, sweet-hot salt, and a gummy worm garnish. 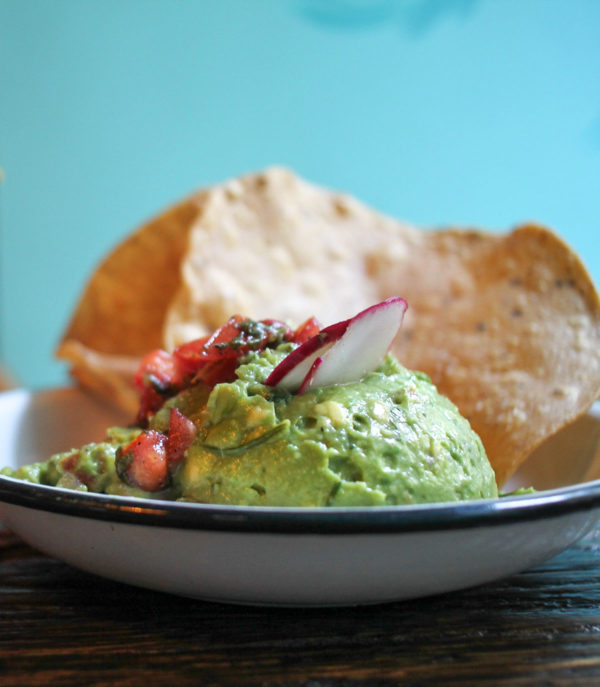 The guacamole was a solid traditional guacamole with mashed avocado. Instead of serving it with chips, it was served with tostadas. At first that seemed a bit odd, but you are able to break them into bite sized pieces perfect for dipping, which makes more sense than tortilla chips that are always just a bit to big to be one bite. 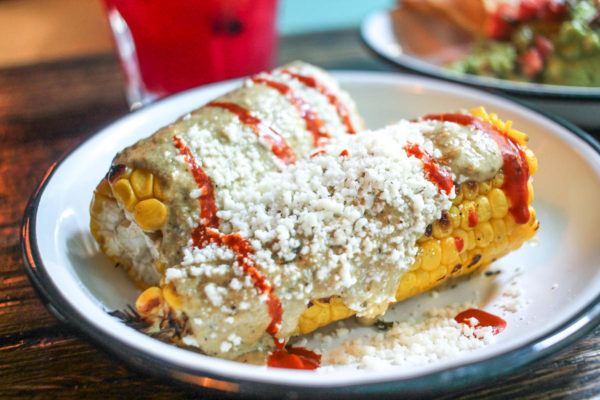 I love elotes so we had to try them. These elotes were a twist on the classic served with a spicy cheese fondue on top. I really liked that it had warm cheese on top instead of the cold cheese and toppings on typical elotes. 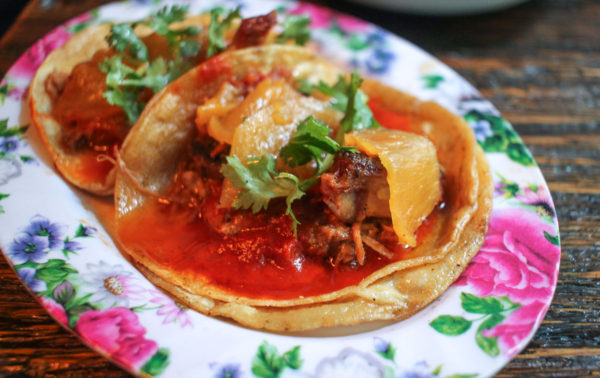 The tacos come two per order, so we got two orders. First we tried the Pork Belly Al Pastor, a classic made with tender shredded pork belly, charred pineapple, and cilantro. All of Broken English’s tacos are served on gluten free corn tortillas. I liked the sweetness from the pineapple, which was more caramelized than charred. 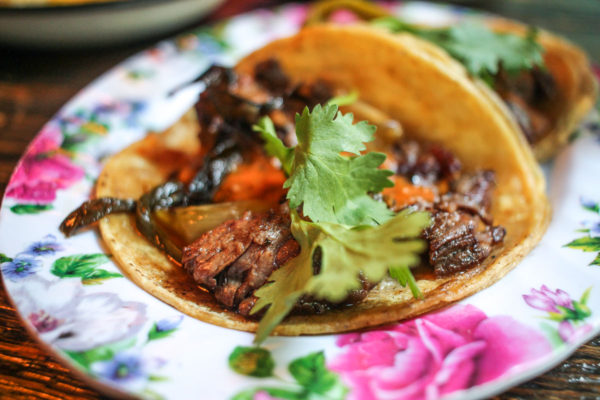 Next we had the Carne Asada made with thinly sliced grilled steak, charred green onion, chile de arbol, and ginger. This taco was my favorite. The steak was wonderfully seasoned and not the least bit fatty or tough. The charred green onion added a nice grilled flavor without overwhelming the steak. 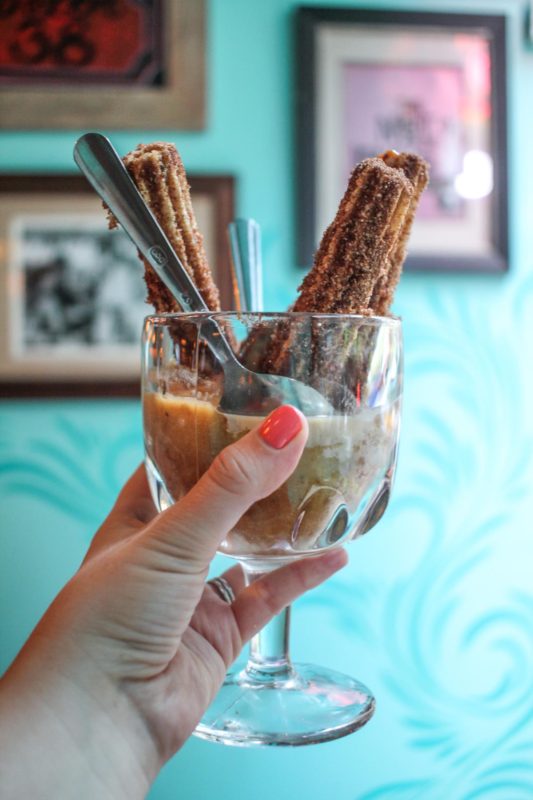 As our meal was ending the chef brought over churros with gelato topped and a peach jalapeño caramel. The churros were warm and crisp and coated in cinnamon and sugar and we used them to scoop up the ice cream and caramel.

Broken English Taco Pub is a welcome addition to dining in the loop, and a fun spot for a weekday lunch or happy hour.

Broken English Taco Pub‘s address is 75 East Lake Street, just a couple blocks from the Lake Brown Line stop. They are open from 11am-1am everyday, and they do accept reservations.