Brisket Enchiladas are a spicy comfort food meal that is easy to prepare. 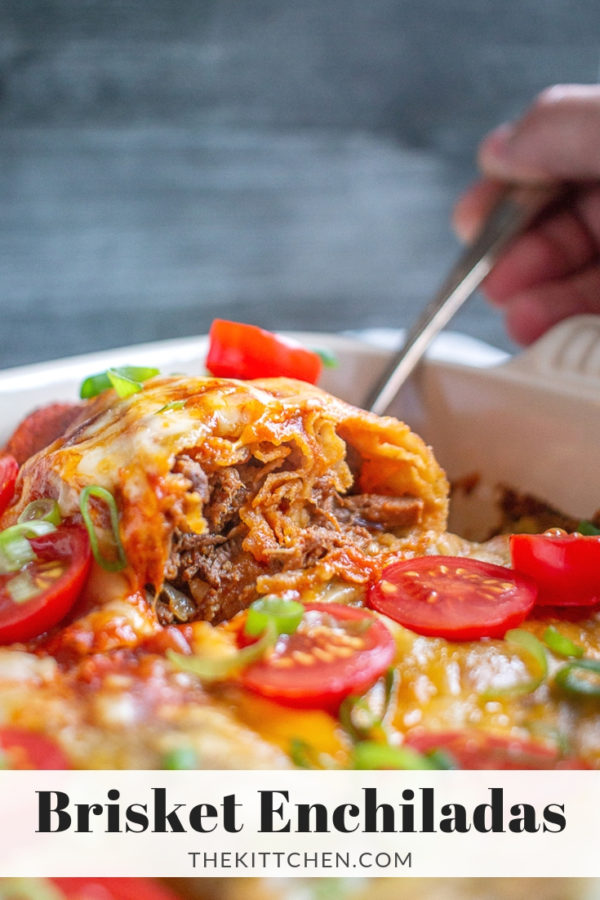 Brisket Enchiladas are made with spicy shredded slow-cooked brisket that is rolled up in tortillas with pinto beans and onions and then topped with red chile sauce, green chile sauce, and cheese. 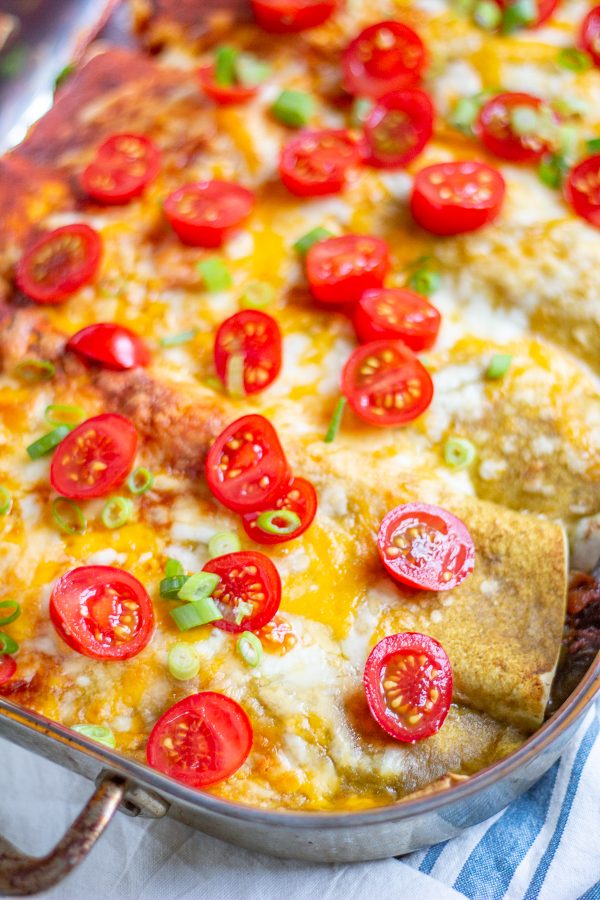 This recipe was inspired by a meal that I had at Eloisa in Santa Fe. The restaurant is known for its modern twists on classic New Mexican cuisine. Enchiladas are a classic New Mexican food, but making them with brisket is a little more creative than the usual chicken or beef. We loved Eloisa’s brisket enchiladas so much that I had to recreate them at home. 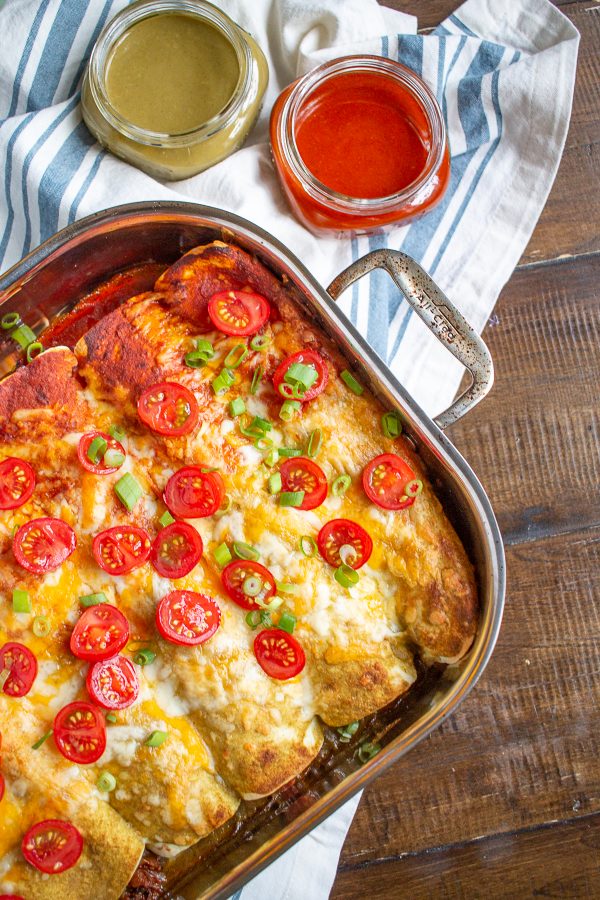 When I recreated the recipe I wanted to incorporate traditional New Mexican foods so I used chile sauce, pinto beans, and corn tortillas in my recipe.

While this recipe is easy to prepare, slow cooking the brisket does take 6 hours. I like to quickly sear the brisket and then cook it in a slow cooker with onions and garlic. I pour a mix of beef broth and red chile sauce over the top. After six hours it is super tender. 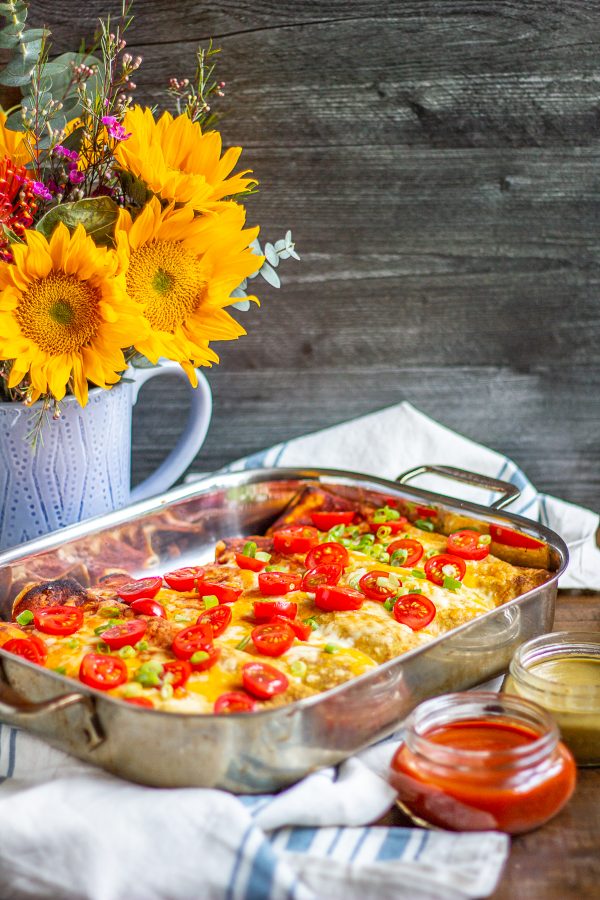 I cooked the brisket the day before I made the enchiladas. I wrapped up the brisket and then I poured all of the remaining sauce into a separate container and put both in the fridge. The next day I removed the hardened fat from the top of the sauce, then I shredded the brisket (it falls apart easily) and I added the onions and some of the sauce to the shredded meat. 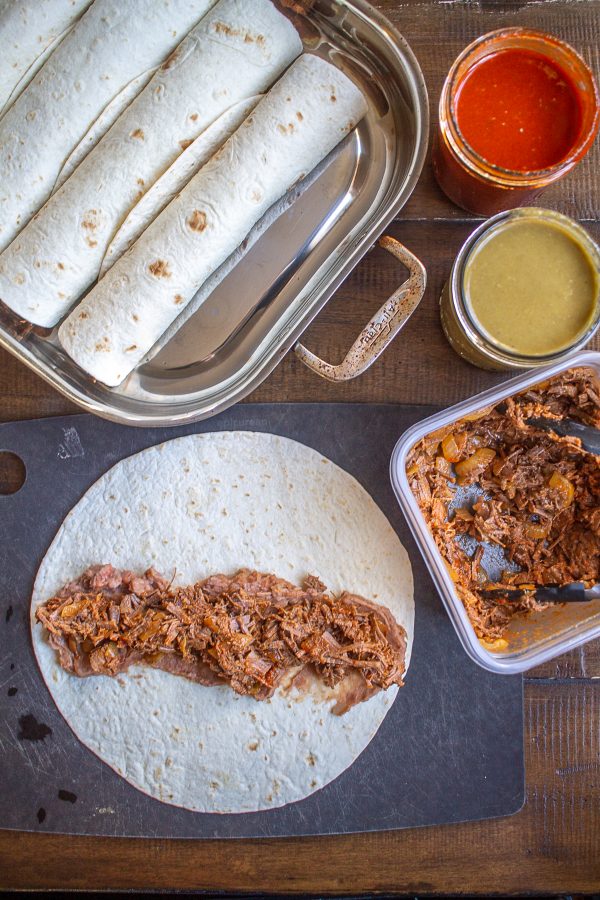 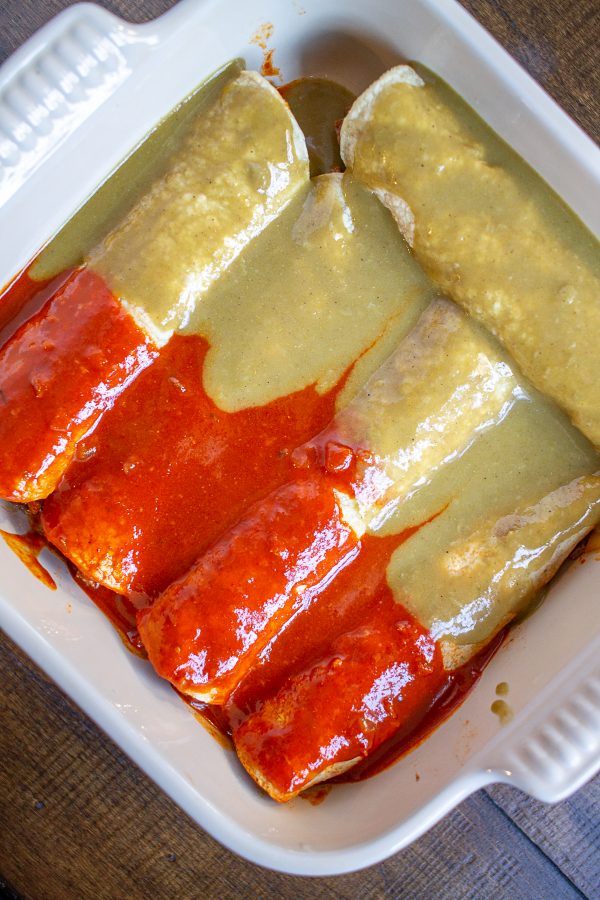 New Mexico is known for chile sauce which comes in two varieties: red and green. It’s common for foods to come topped with both sauces, which is what the locals call “Christmas”. Since I was creating a meal inspired by Santa Fe, I decided to top the brisket enchiladas with both red and green chile sauce. I am obsessed with these spicy sauces and I have been making them using chile powder that I brought back from New Mexico. If you don’t want to make your own chile sauce, you could use store-bought enchilada sauce. 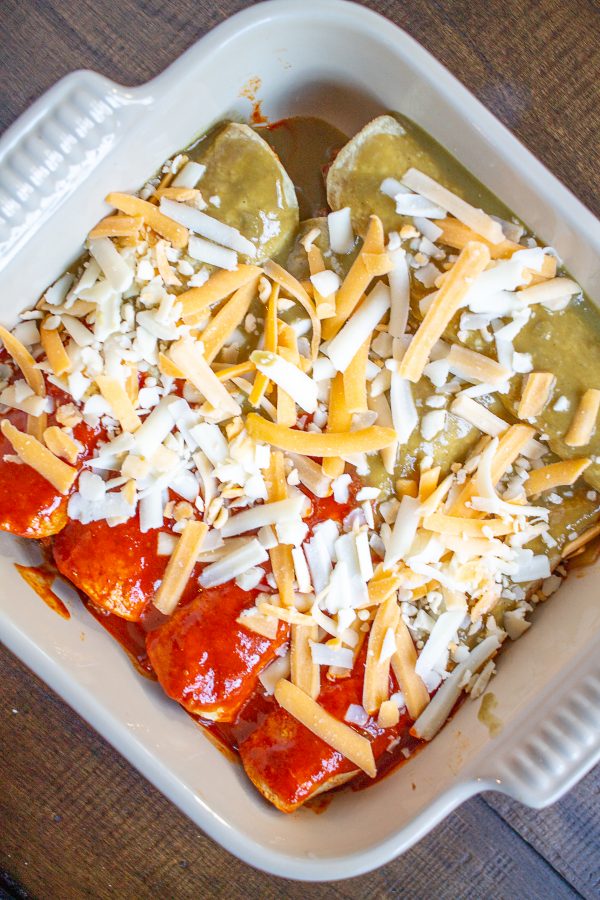 Another food that New Mexico is known for is corn tortillas. At restaurants, the tortillas are almost always corn. I made two brisket enchilada casseroles, one with flour tortillas (which Charles prefers) and another with the more traditional corn tortillas. 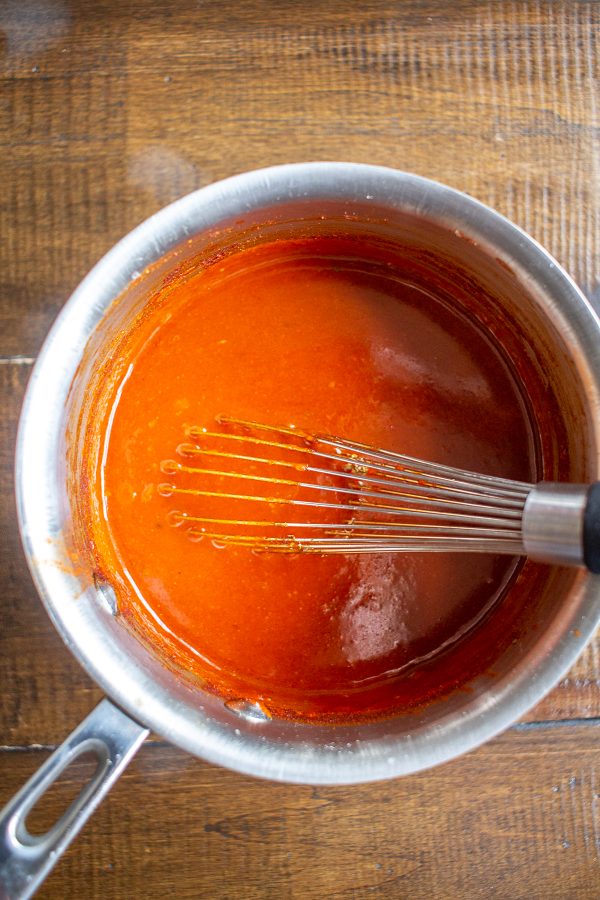 In order to prepare this recipe, you will need to make a batch of green and red chile sauce. If you don’t want to make green chile sauce with green chile powder, you could make my poblano cream sauce with fresh poblano peppers.

How to Make Brisket Enchiladas:

Next, I like to quickly saute the onions and garlic in the pan drippings. This is another way to add some extra flavor. Add the garlic and onion to the pan drippings, season with salt and pepper, and saute over medium heat for 5 minutes, until the onions are soft. Pour this mixture over the brisket.

Pour the beef broth and 1 cup of the red chile sauce over the brisket. You want the brisket to be just submerged in the liquid. Add more beef broth if necessary. Place the lid on the slow cooker and cook on low for 6 hours.

Next, you want to assemble the enchiladas. Mix the pinto beans and refried beans together. Gather a large casserole dish (or two dishes), the brisket, the tortillas, the beans, the cheese, and the chile sauces.

If you are using corn tortillas, there is a trick: you want to warm them so that they are pliable. You can heat them over a gas burner or in the microwave.

Pour just enough chile sauce in the bottom of the dish to lightly coat the bottom (you can use either the red or the green sauce). One by one, roll up the tortillas with about 1/2 cup of the brisket and about 1/4 cup of the beans. Roll the tortillas and place them in the casserole dish with the seam facing down.

Bake the enchiladas for 45 minutes at 350 degrees. Keep them covered for the first 30 minutes, then remove the lid or foil so that the cheese will lightly brown.

Garnish with fresh cherry tomatoes and green onion and serve with sour cream on the side.

I made these for dinner tonight with leftover smoked brisket from last night's dinner. They were phenomenal and the perfect way to repurpose leftovers.

Thanks so much! I love hearing this! I am jealous that you could get your hands on a brisket.

Yum... these look so good - not a fan of pinto beans? Would black beans work instead?

Yes! You could definitely use black beans!