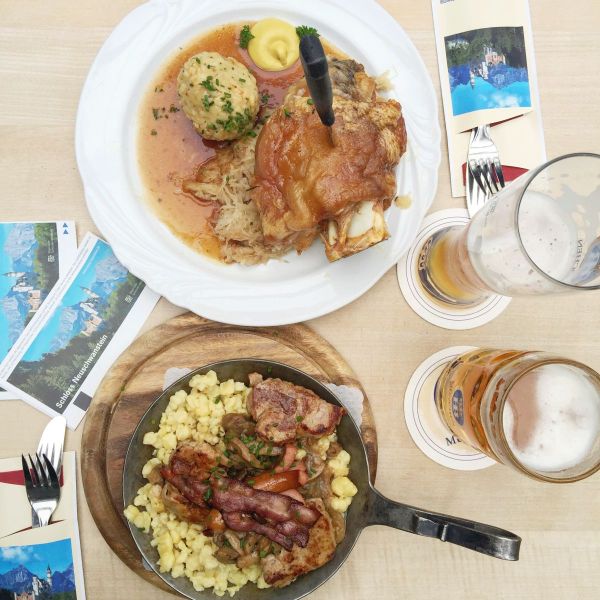 I visited Kansas City just before going to Munich and both cultures have pork centric cuisine – but the similarities between American food and Bavarian food end there. I spent a month living in Berlin when I was 21, and I was surprised to learn that Bavaria has it’s own cuisine, culture, and language. It used to be a separate kingdom with its own king, which is why Bavarian culture is so distinct.

While in Munich I tried lots of different traditional Bavarian foods. My husband Charles explained that since we were visiting during Oktoberfest it was likely that many restaurants were emphasizing traditional Bavarian food. The joke is that people in Bavaria don’t eat vegetables. The food consists of pork, potatoes, pretzels, and cheese. Vegetables (other than potatoes) are not emphasized as much as they are in other cultures. We tried all of these things, and I will tell you all about it.
Oktoberfest Food
Beer is consumed in epic quantities during Oktoberfest, but while the festival only lasts 3 weeks, large beer gardens in Munich stay open year round. These outdoor restaurants serve steins of beer and a buffet of food. The beer at beer gardens is standard beer that is about 5% alcohol, while the beer at Oktoberfeest has a high alcohol content (about 8%). Otherwise, both the biergartens and the Oktoberfest tents serve beer and similar food, and have live music. 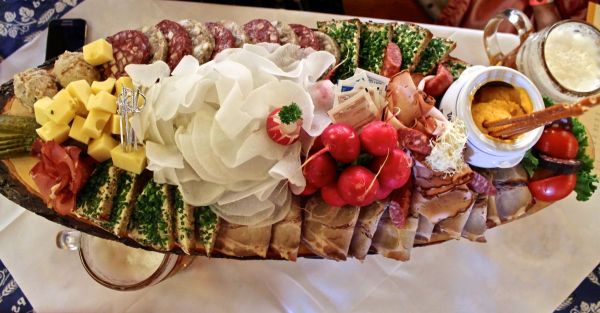 We spent two days at Oktoberfest, and traditional Bavarian food and beer is served in the tents. Since we had to pre purchase vouchers for food to secure our reservation, we ended up eating a lot. We started with a giant platter of appetizers. 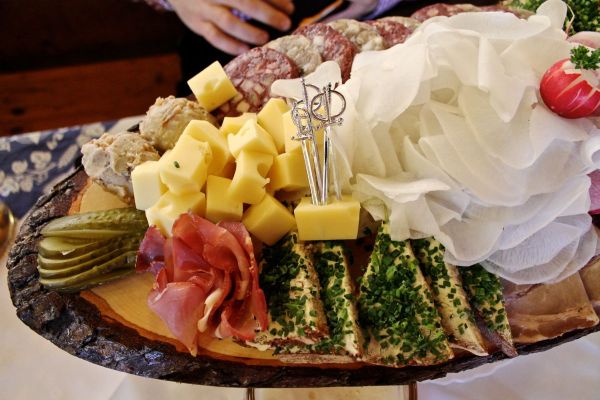 There were pickles, bread with butter and chives (this is a common snack), cheese, shaved radish, and cured meats. 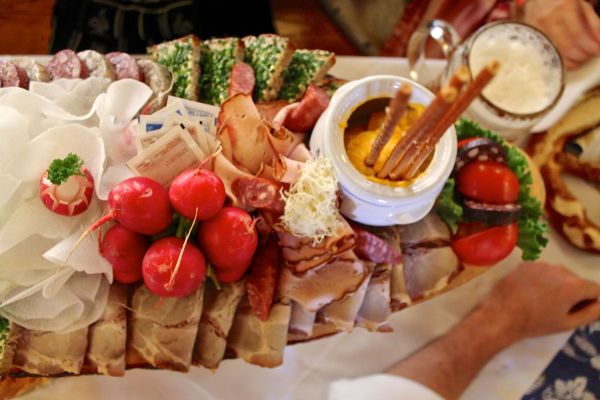 Plus, sliced pork roast, sliced ham, and a pot of the best obatzda we had during our trip. 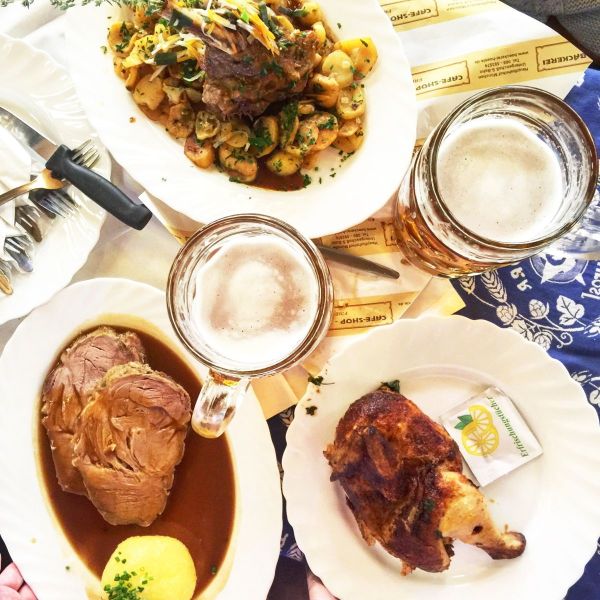 And we weren’t done eating. Next we had pork roast with Kartoffelkloesse (a potato dumpling), lamb roast with spaetzel, and half a chicken. These are all items that you will find on most menus in Bavaria. 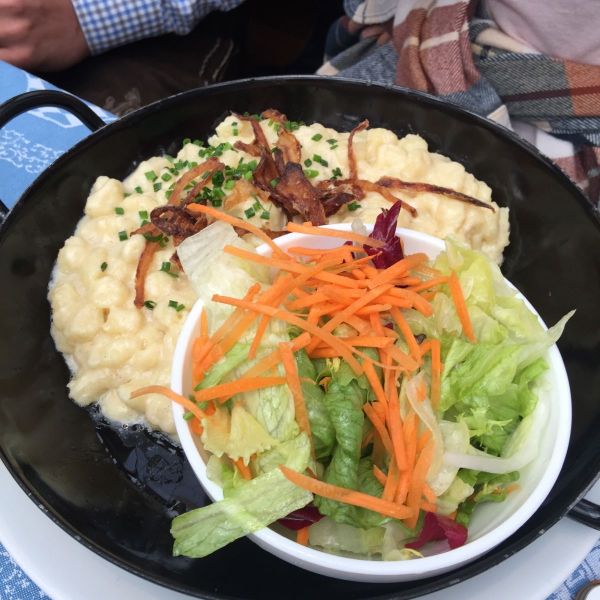 My favorite food in Bavaria is kase spaetzel; potato pasta topped with cheese. It is more cheesy and less creamy than macaroni and cheese, and the potato pasta is more dense. This is a filling dish, and a staple on menus. It is a rare vegetarian option in a country with a meat filled diet. (I am sorry to say that I think vegans would have a very difficult time in Bavaria). 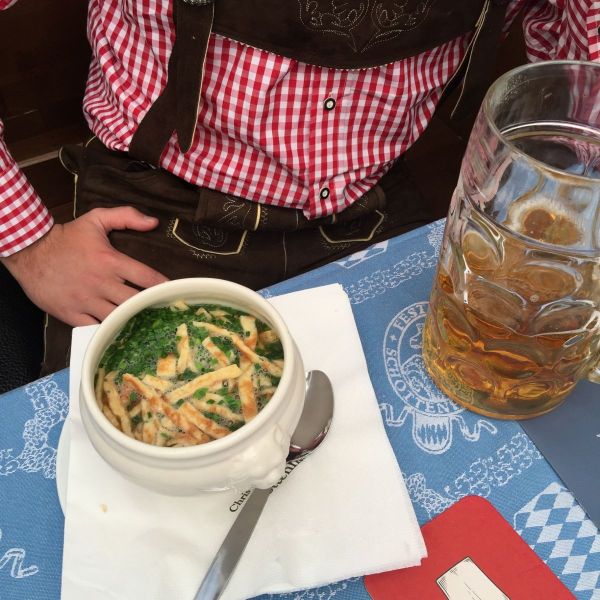 Another thing I discovered at Oktoberfest was Pancake soup. I didn’t try this, but I am fascinated by its existence. Savory pancakes are sliced and served in a beef broth. It did not live up to the hope that it would be a miracle hangover cure. 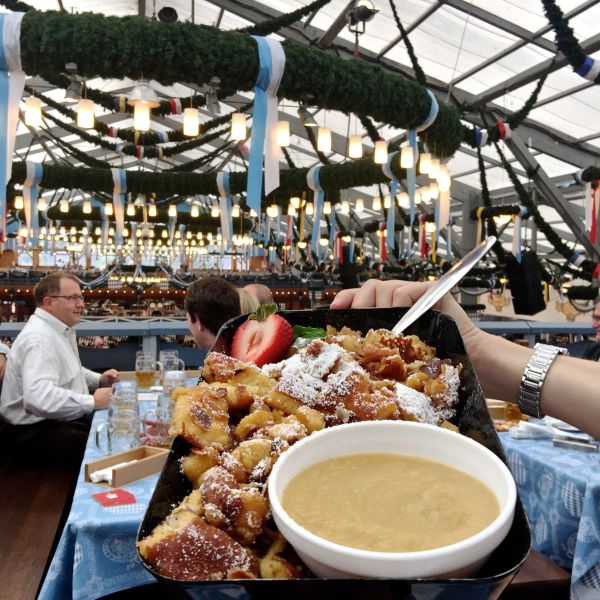 They serve desserts at Oktoberfest too. This is Royal Bavarian Kaiserschmarrn. It’s a thick spongey pancake that is served with applesauce. It reminded me of beignets. 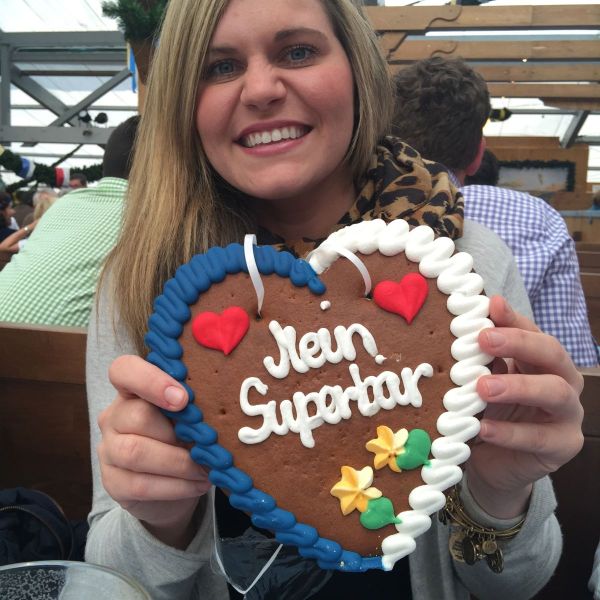 At Oktoberfest women walk around selling heart shaped cookies. Charles explained that you are supposed to wear the cookie around your neck, not eat it. The cookies say sweet things (this says “my super bear”) – almost like conversation hearts – and guys buy them for their girlfriends. As you might imagine, us Americans could not wrap our heads around the fact that someone would make a cookie that wasn’t meant to be eaten. So Libb bought one… and we attempted to eat it. Seriously, do not eat the cookies. They taste like gingerbread mixed with cardboard. Lesson learned.
Coffee and Cake 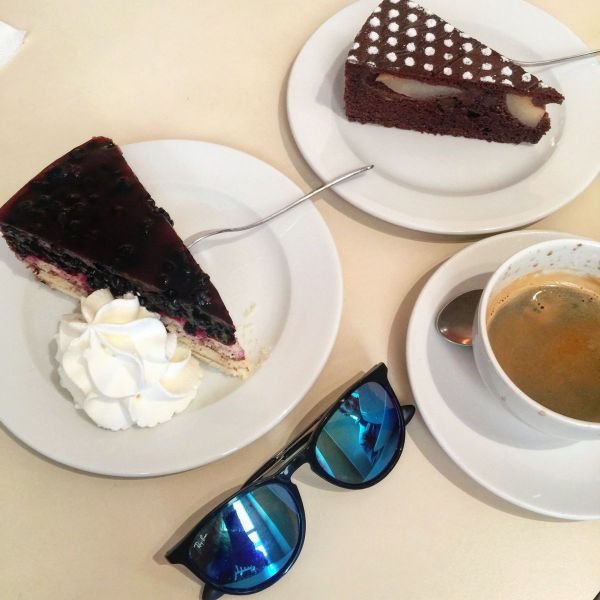 At around 4pm the Germans take a break for coffee and cake. The cakes tend to be rich and dense, and often incorporate fruit. We had coffee and cake at the Glockenspeil Cafe after our bike tour, and I had the best Chai Latte I had ever tasted. I also tried a chocolate and pear cake, but I am not entirely convinced that pear and chocolate are a successful pairing (oh look at that pun). 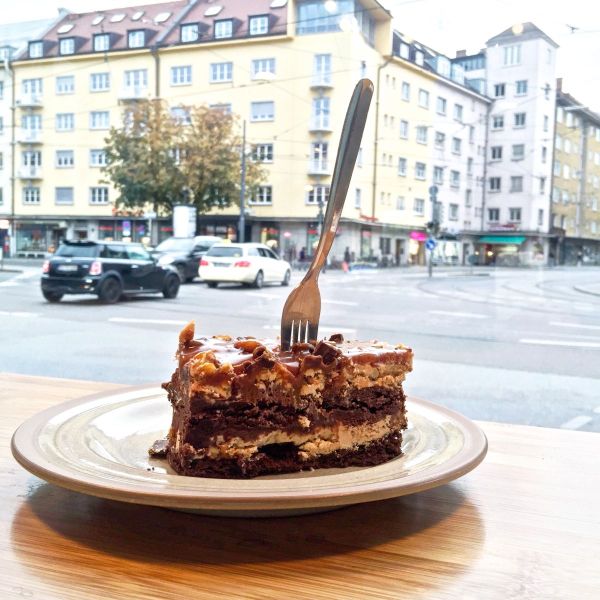 One day I went to wander around and take photos while Charles took a nap… and I got really lost. I needed to connect to wifi to find my way back home. I ended up going to San Francisco Company, a Starbucks knockoff, where I had this incredible Chocolate Peanut Butter and Caramel Cake. It made getting lost a happy mistake. 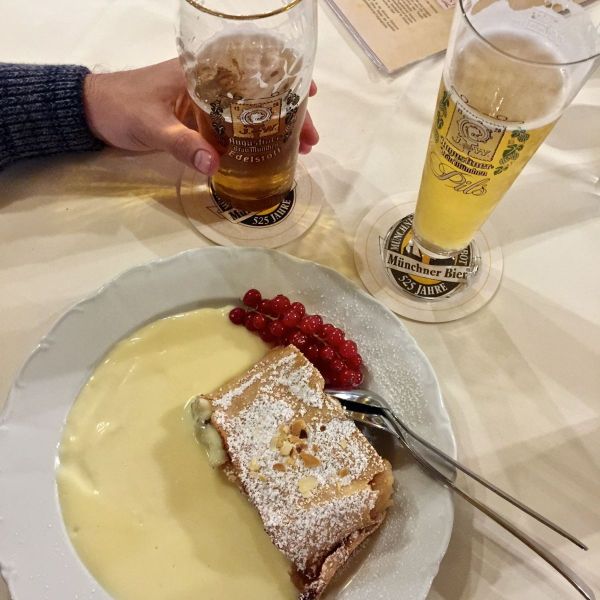 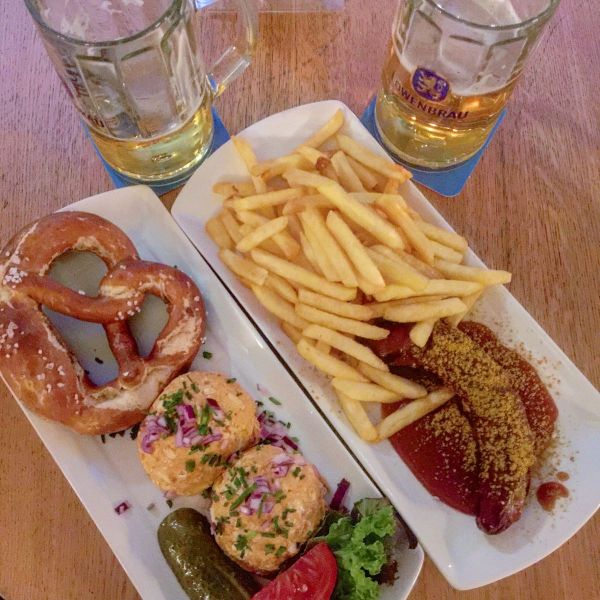 Obatzda is basically a German version of pimento cheese. I made this comparison because they look similar, and because both are made by blending cheeses together. Obatzda is a blend of Camambert, cream cheese, butter, paprika. Since Obatzda is often homemade, there are lots of variations, I loved it at some restaurants, and didn’t like it at others.
Obatzda is served with another Bavarian specialty: pretzels, which the Germans call bretzels. These soft doughy bretzels come in many shapes sizes and flavors, and are superior to any I have tried in the states. Charles especially like the bretzels that are covered in cheese before being baked. 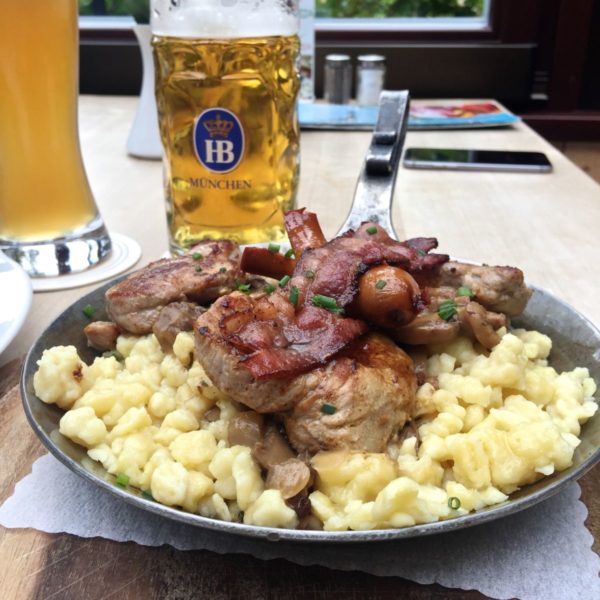 When we went on our side trip to Neuschwanstein Castle we ate a Schlossrestaurant. There are only two restaurants in the tiny town below the castle – definitely walk up to Schlossrestaurant instead of eating at the hotel at the bottom of the hill – the food was quite good and the prices were much more reasonable. I had pork three ways over spaetzel. Pork was roasted, in sausage, and in bacon. This dish is rare in that it incorporated a vegetable other than potatoes! It had a great slightly creamy mushroom sauce. 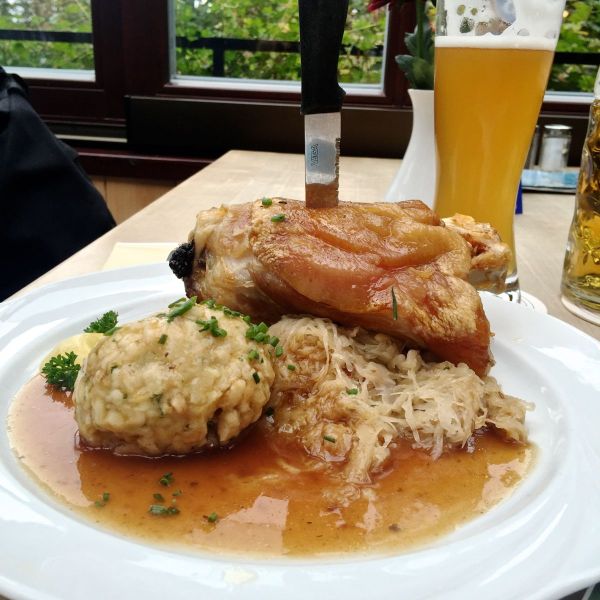 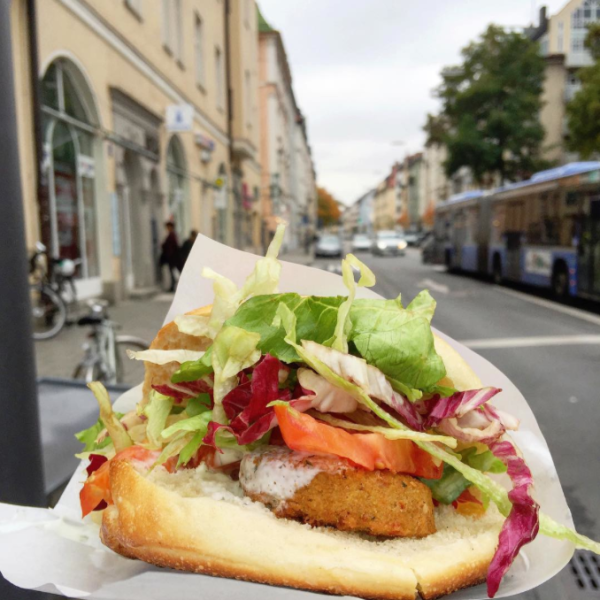 Doner Kebab and Fafalel are not Bavarian foods, but they are very popular throughout Germany due to the large Middle Eastern population. You can find doner/fafalel stands that stay open late into the night – it’s what German’s have for drunk food. There are over 1500 of these stands in Berlin alone (at least that is the number I was told when I lived in Berlin). 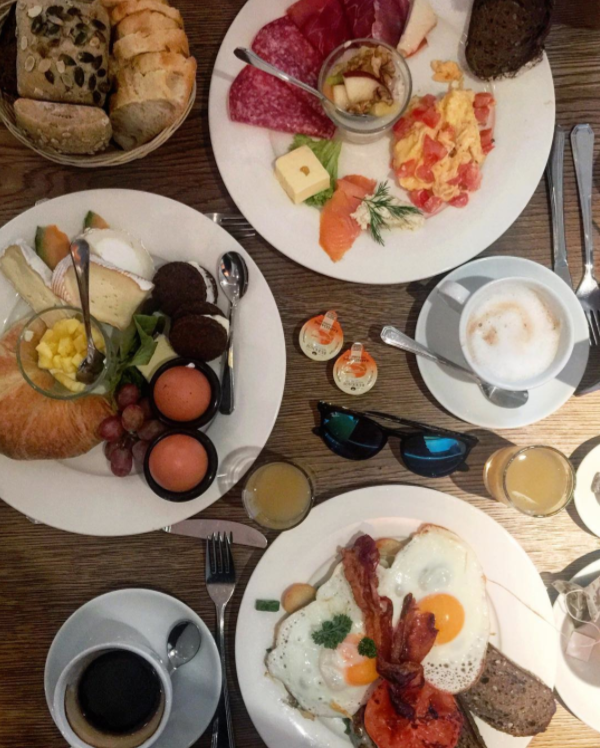 Breakfast in Germany is hearty, and a bit different than breakfast in America. There is lots of bread, cheese, sausage, and hearty foods. Hardboiled and fried eggs are more common than the scrambles, omelets, and benedicts that we like stateside.
Restaurant Recommendations! 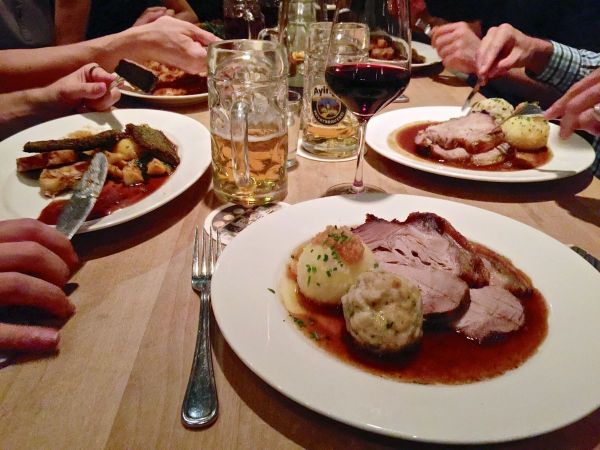 My favorite place for Bavarian food was Kaisergarten. They specialize in farm to table Bavarian cuisine, and after eating it for a week straight I can say Kaisergarten was the best. The atmosphere is rustic with stacked wood and stuffed animals decorating the space (that might sound creepy, but it wasn’t). They take reservations and the long tables are perfect for groups. 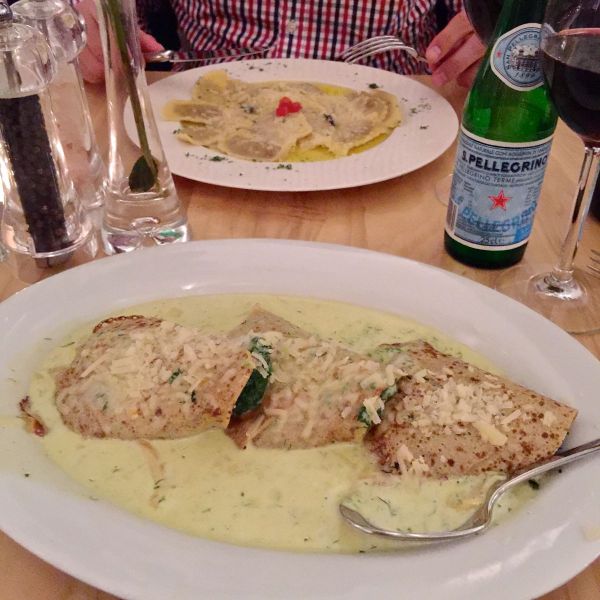 When we needed a break from Bavarian cuisine, we dined at a chic vegetarian restaurant called Prinz Myshkin. Housed in a whitewashed cavernous space, guests are welcomed with a friendly staff and a large menu that caters to vegetarians and vegans. The menu is so expansive that someone might not even realize that there is no meat on the menu.  I had crepes filled with lots of spinach and ricotta with a creamy cheese sauce, and Charles had an excellent mushroom filled pasta. I started off with a salad and it was fantastic – I loved the creamy yogurt dressing – it was a treat since in Europe most restaurants just give you olive oil and balsamic for your salads. If you don’t want to commit to a vegetarian dinner, Prinz Myshkin has a large case of sweets, and if would be a lovely place for coffee and cake too.
We had brunch at Forum near Marienplatz, and they were able to accommodate our large group with ease. The menu had traditional European breakfast with some more American egg dishes. Plus the location is a great jumping off point for sightseeing.
Do you have any Munich restaurant recommendations? Let me know – I will be heading back there for Christmas.

All of this looks so amazing and delicious!!