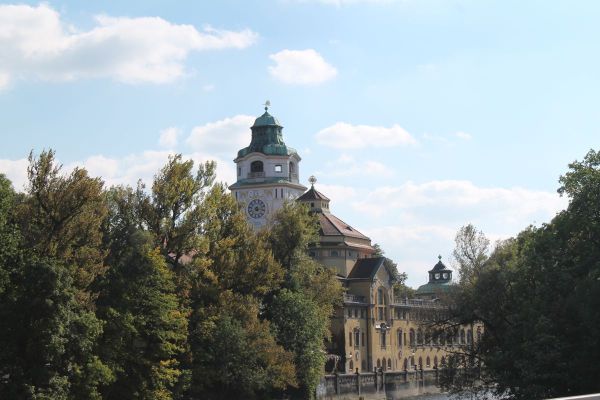 We began our European adventure in Munich, a city where my husband went to middle school and high school, so I basically had a local tour guide. At the start of our trip we were joined by our friends Amanda and Libb, which made a perfect excuse for us to go out and do some sightseeing. The four of us spent one day at Oktoberfest, and had a more cultural day in the city the next day. 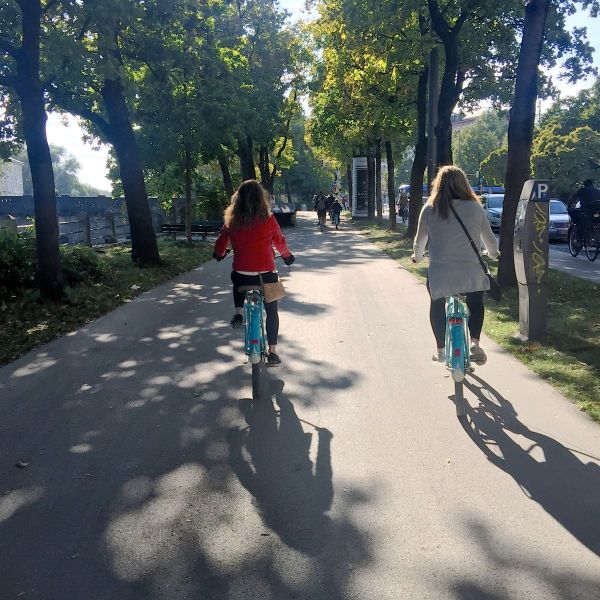 A few friends had recommended Mike’s Bike Tour, so we signed up, and we LOVED it. The tour guide was energetic and knowledgeable and seeing the city on a bike was really fun! We chose a 4 hour tour, which might sound like lots of biking, but when you break it down we went 4 miles, stopped to see lots of sites, and took an hour lunch break at a beer garden. 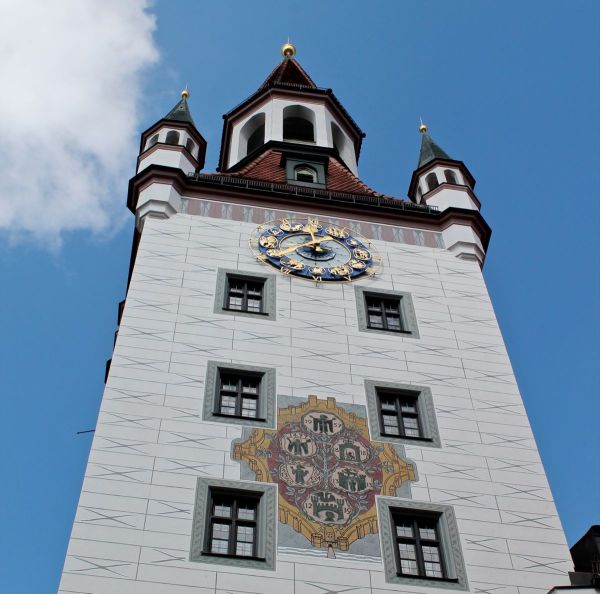 We met at the Town Hall, which is in Marienplatz, right in the center of the city. Then we got bikes and set out on the tour. 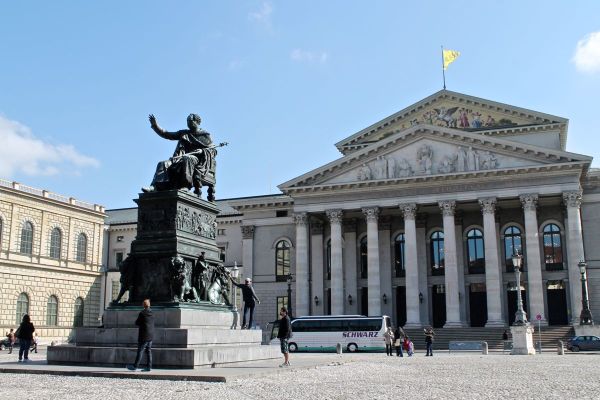 One of our first stops was at the Munich National Theater. This is the fourth time the building has been constructed. It burnt down twice (at one point beer was tried to extinguish one of the fires), and then it was bombed during WWII. Today it’s home to is home of the Bavarian State Opera. 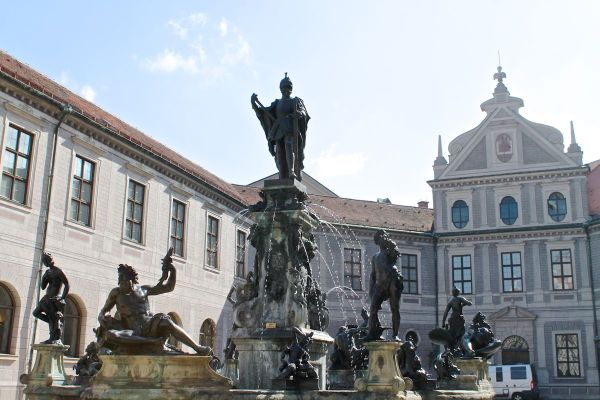 Next we rode over to the Munich Residence Museum. Many of the architectural elements of the building were painted onto the building to save money when rebuilding after the war. 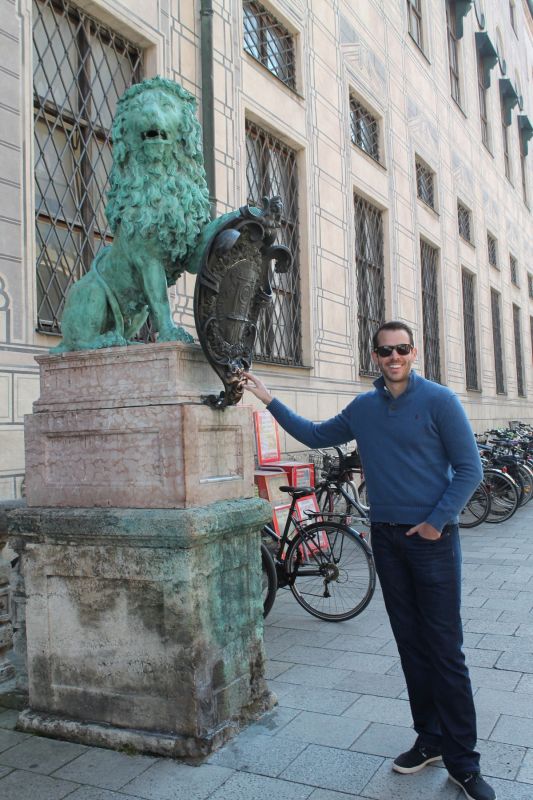 At some point we stopped to rub three lions for good luck. 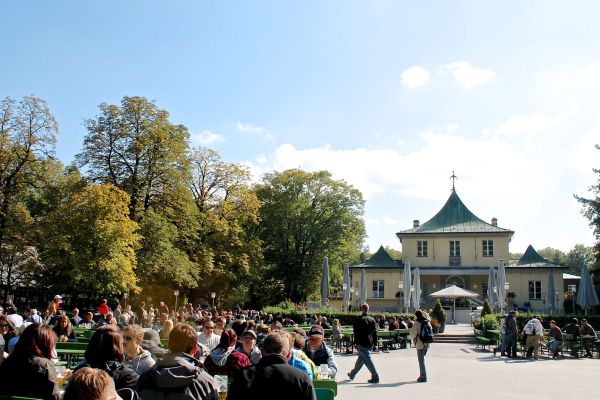 Then we made our way to the English Garden, which is Munich’s big park, modeled after Hyde Park in London. The park has grassy areas, places for swimming, two waves for surfing, and it’s home to the Chinesischen Turm (Chinese Tower) biergarten, which is the second largest biergarten in the world. This biergarten is where we stopped for lunch. It’s capable of seating 7,000 people, and they serve traditional Bavarian food, and steins of beer. 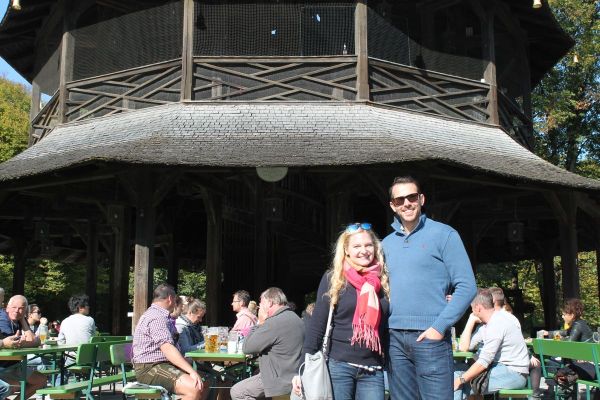 Biergartens have live bands that play Bavarian music – the band was up in the tower behind us. You can also see someone in the background wearing lederhosen. Charles explained that people only wear traditional Bavarian clothing during Oktoberfest. When we arrived in Munich during Oktoberfest it seemed like 1/3 of the people we saw on the train were wearing dirndls and lederhosen. When we arrived back in Munich after Oktoberfest as over, everyone was back to wearing everyday clothing. 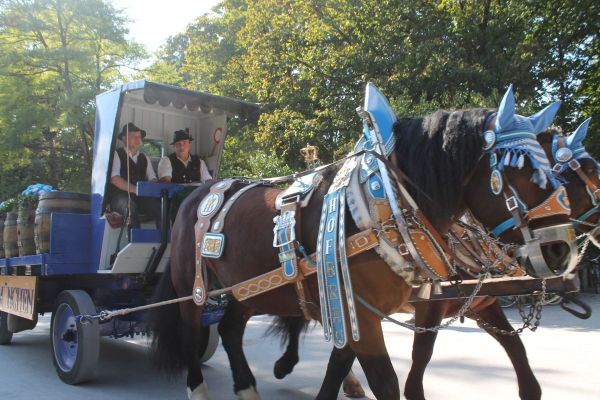 While we were there, we got to see a beer delivery arrive. The beer arrives in horse drawn carriages and the barrels of beer are decorated with flowers. Sometimes we saw these carriages on the road with cars, which was a fun sight. 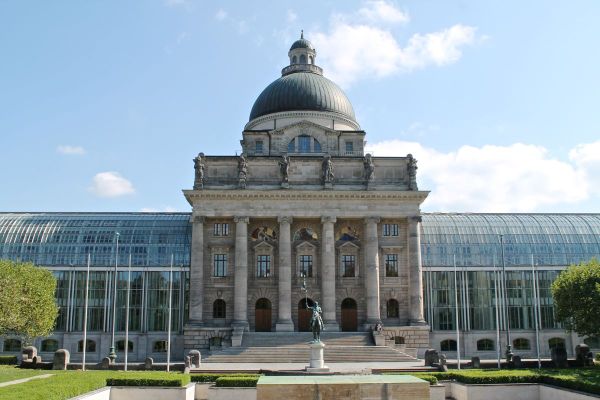 We stopped at Munich’s parliament building which is built with glass to symbolize transparency after the war. 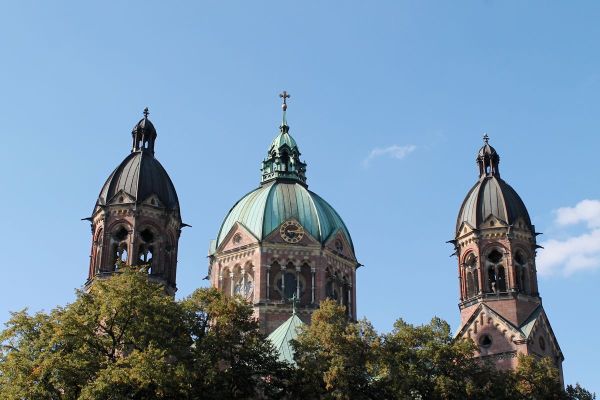 This is the protestant church, which currently isn’t used since there are not enough Protestants in the city. Bavaria is 90% Catholic (an awkward fact that Bavarians seem proud of). 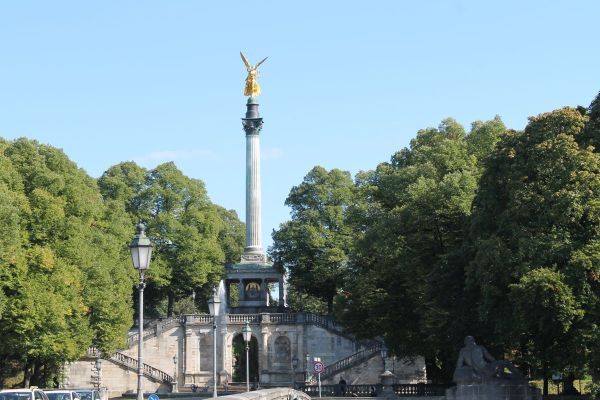 This is the Angel of Peace, which was built to commemorate 25 years of peace after the Franco-German War. In 1981 the angel fell off her tower and took 2 years to be repaired. 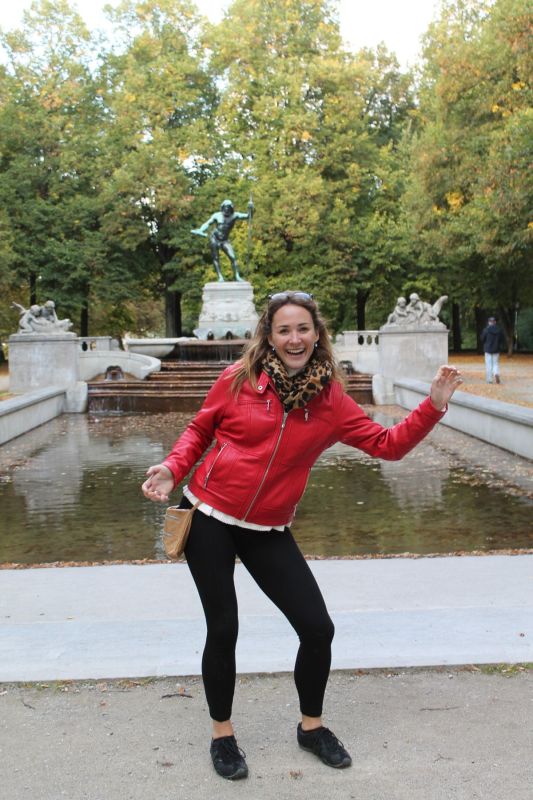 Here’s a funny picture of Amanda posing like the fountain behind her. Amanda has an awesome podcast called She Did It Her Way and Forbes just named it one of the 12 Best Podcasts for Entrepreneurs! I was interviewed in episode 24, and you can listen here. {CONGRATS AMANDA} 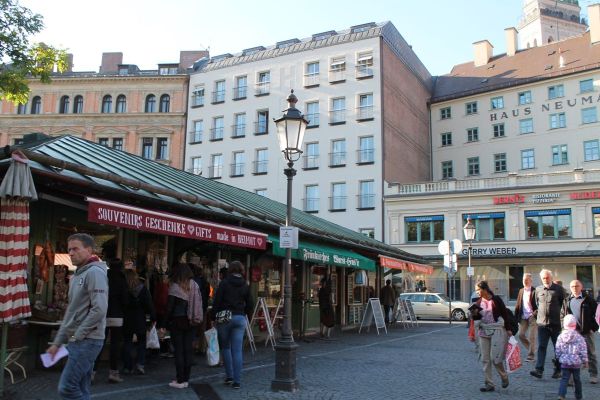 After the bike tour wrapped up, we walked to the outdoor market. This large market houses food stands selling honey, vinegar, fruit, vegetables, cheese, meat, and more. We stopped into a cheese stop to buy some provisions since Charles and I believe that we always need to have cheese at home. I must say that the lady at the cheese shop was not friendly. Charles couldn’t even charm her by speaking fluent German, and unfortunately, I must report that Bavarians are not exactly friendly… Earlier that day, on the bike tour, a woman gave me a look of death and proceeded to try and run me over with her bike – on purpose! There were several other incidents throughout our trip – Charles said that Munich was overly crowded because of Oktoberfest which stresses the locals out… but for me it was a bit of culture shock! (Even though I spent a month in Berlin living with a German woman). 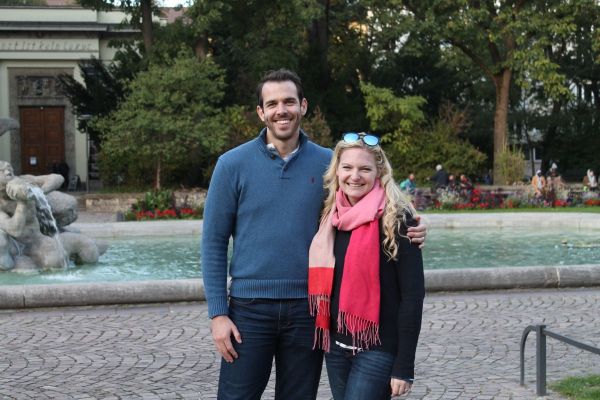 Despite the grumpy locals, Munich is a wonderful city. After Amanda and Libb headed back to Chicago, Charles and I spent a bunch of time hanging like locals and visiting with his friends. We also took a day trip to see two nearby castles. 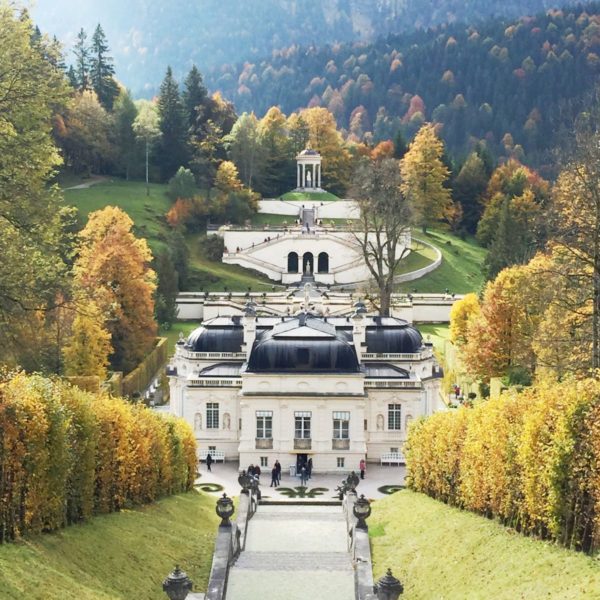 The first stop was Linderhof Palace. This is a smaller palace that was built by King Ludwig II of Bavaria. King Ludwig II remained the king of Bavaria even after the loss of the Franco-Prussia War resulted in the formation of the German Empire. After this point he withdrew from politics and focused on art and architecture projects, including the construction of Linderhof and Neuschwanstein. Linderhof was inspired by Versailles in France. 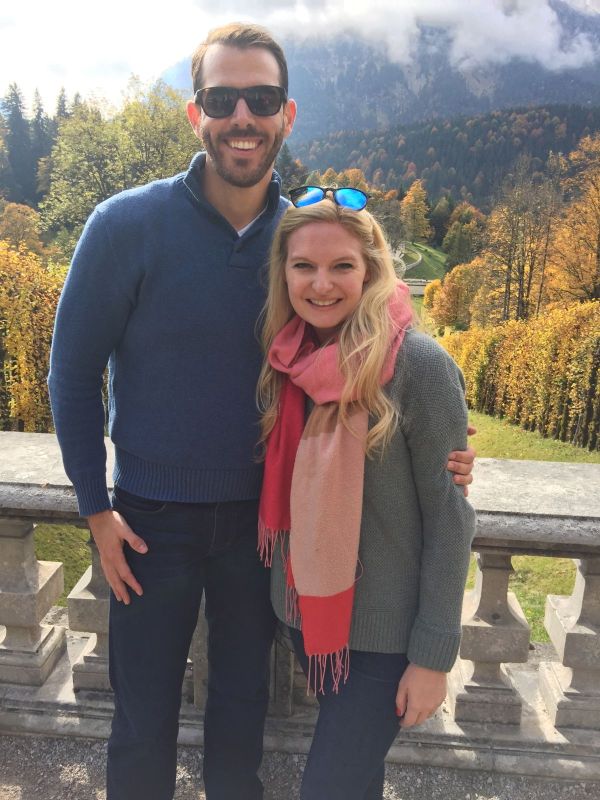 We asked someone to take a photo… and stood in front of the castle completely blocking it. Good work. 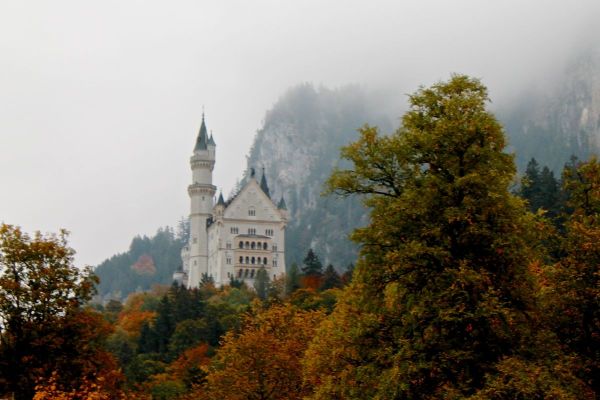 Next we hopped back on the bus and went to Neuschwanstein, one of the most famous castles in the world, since it was used as the inspiration for the Sleeping Beauty Castle in Disneyland. 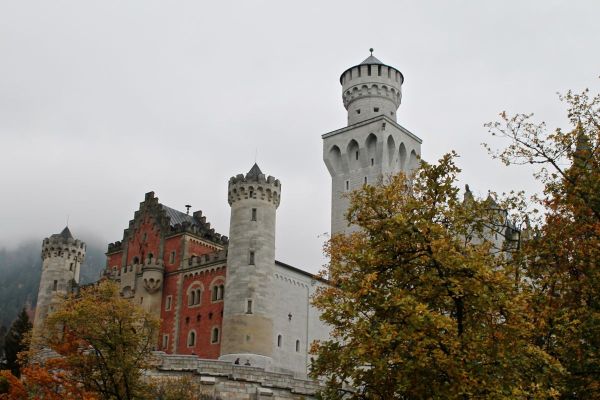 This castle was also built by King Ludwig II, who commissioned the construction of three castles. King Lugwig II spent so much money on this projects that he was declared insane, and died immediately after being taken into custody. The circumstances of Ludwig II’s death are mysterious. He was discovered drown in the lake, and no other details are known. 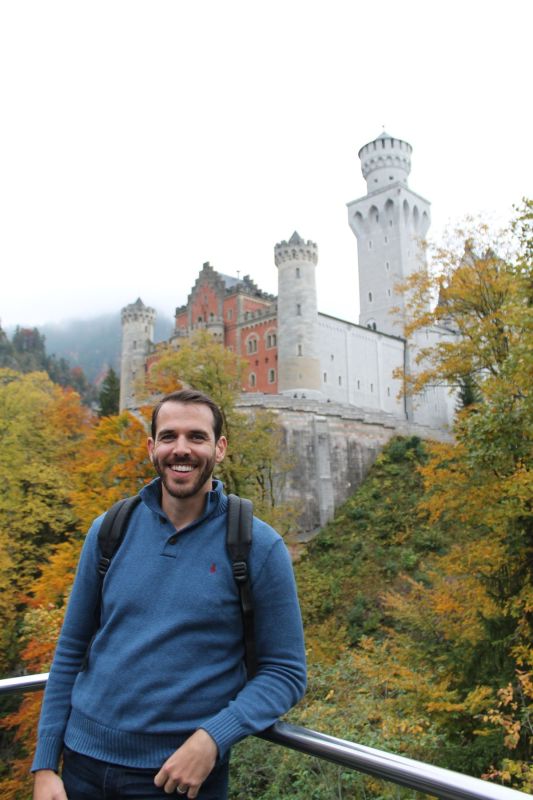 In case you are curious, when you grow up in Munich, these are the types of places you get to visit on school field trips. 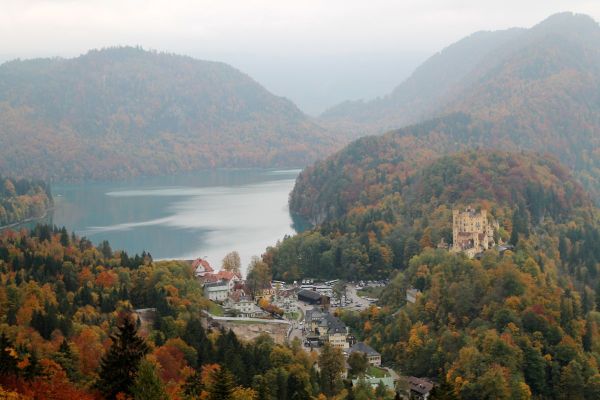 You aren’t allowed to take photos inside the castle, but this is the view from the castle. It was extra pretty with all the fall foliage. 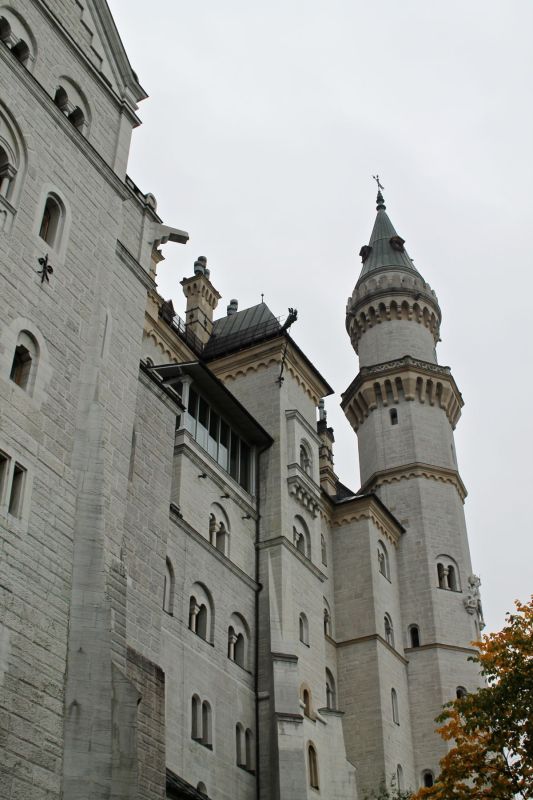 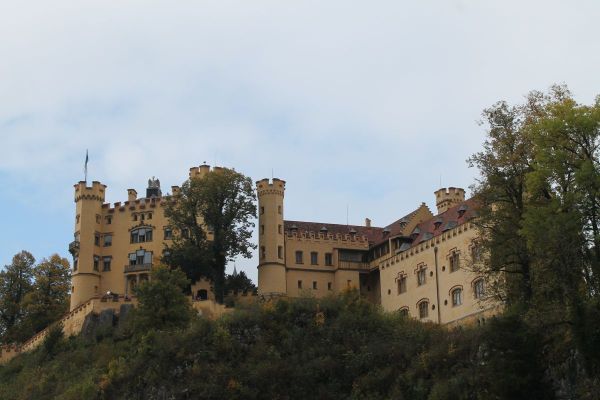 The castle where Ludwig II grew up is at the bottom of the hill below Neuschwanstein. It’s isn’t open for tours because it is privately owned. #lifegoals
If you make your way to Munich, you definitely need to go on an a Mike’s Bike Tour. I thought that the castle trip was fun too. If you are interested in going to Oktoberfest, you can check out this post. Next week I will be telling you all about Bavarian food, before we head to Italy and France!
Have you been to Munich? Do you have any suggestions? Leave them in the comments.

Loving all the photos! My husband and I visited Munich in August several years ago and loved it! It may be touristy, but we were big fans of the Hofbrauhaus--I've heard it's crazy during Oktoberfest!