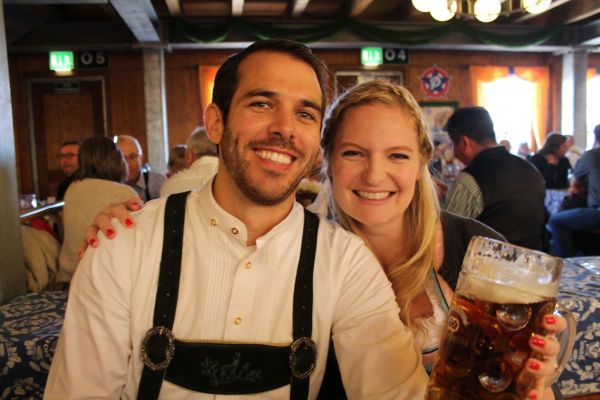 I am back from Europe and excited to tell you all about my trip. I figured I would start with Oktoberfest since it was the primary reason for our trip. Oktoberfest’s name can be confusing since it begins in September and ends in early October. The first keg is tapped on the third Saturday of September, and the festival ends after 16 days, on the first Sunday of October. 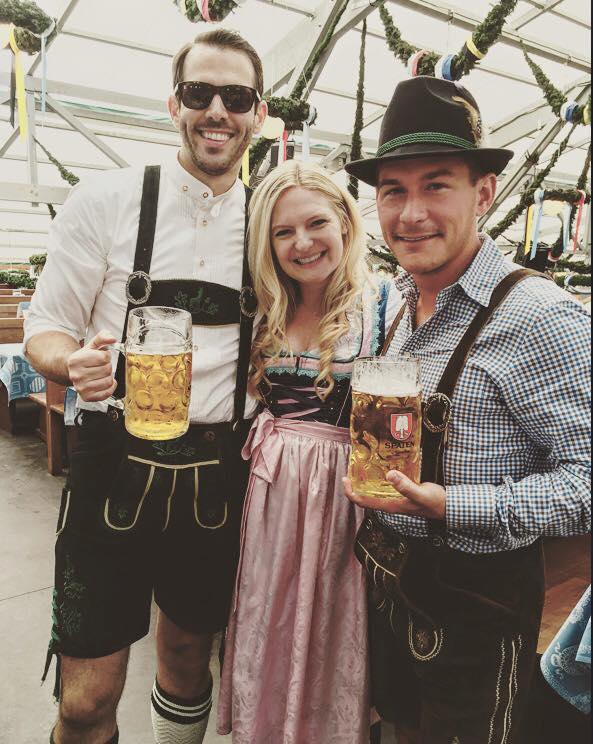 The first Oktoberfest was a celebration of Crown Prince Ludwig’s wedding in 1810 where all of the citizens of Munich were invited to festivities on the fields outside the city gates. The royal family paid for everything, and everyone had so much fun that they decided to make it an annual event, on the condition that everyone paid for their own food and drinks. Now, 182 Oktoberfests later, the festival attracts about 7 million attendees from all over the globe. 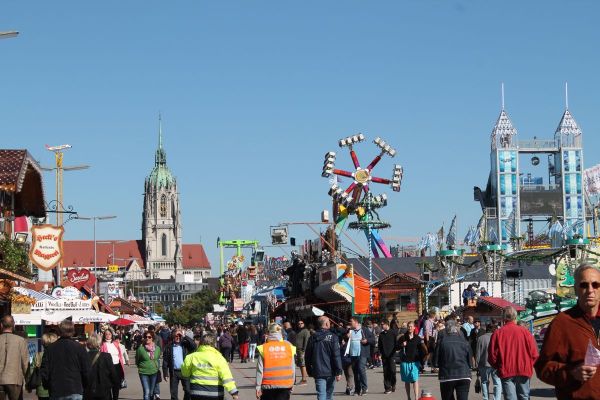 Most Americans think of Oktoberfest as a beer drinking festival, but there is more to it than that. There are roller coasters, rides, and carnival games. It is common to go to Oktoberfest without going to the beer tents. Speaking of beer tents, there are large 14 beer tents, each seating up to 10,000+ people. Each tent is very different appealing to various age groups and types of people. 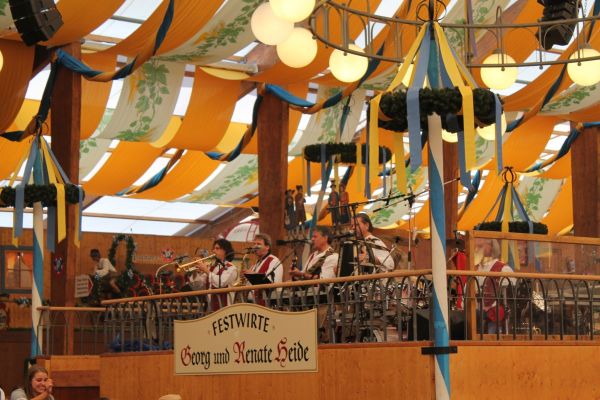 The tents all have live bands, serve steins of beer from a specific brewery, and have menus of traditional Bavarian food. It is important to note that Oktoberfest beer is specially brewed to have a high percentage of alcohol, and when you drink it by the stein, it’s quite effective. While half liters of beer are available, I was told that no one orders them and that we needed to stick to full steins. 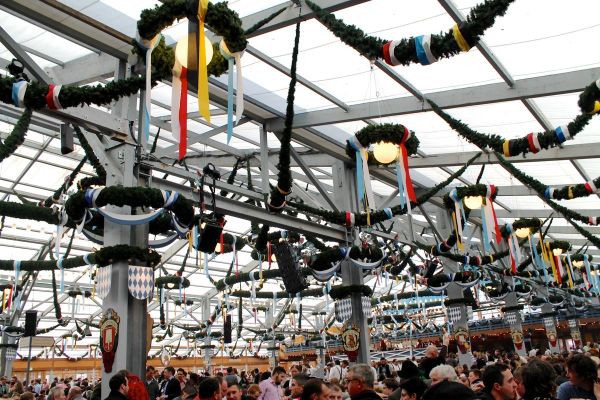 I have been to Oktoberfest three times now, and each time was very different. I studied in Berlin ten years ago, when I was 21. Three of the other Americans and I decided that we needed to go to Munich for Oktoberfest. We viewed it as a once in a lifetime chance  – so we devised the silliest plan ever, accounting for the fact that all the hotels in Munich were booked up, and the fact that we didn’t have reservations at Oktoberfest. We rented a BMW station wagon on a Friday night, and drove to a town outside Munich. We spent the night in a hotel, drove to a train station in Munich the next morning, got to the Oktoberfest grounds just before the tents opened securing one of the unreserved tables, drank beer for about 12 hours, and then spent the night in the station wagon. The next day we drove back to Berlin. See, I told you it was all very silly. But we had the best time. 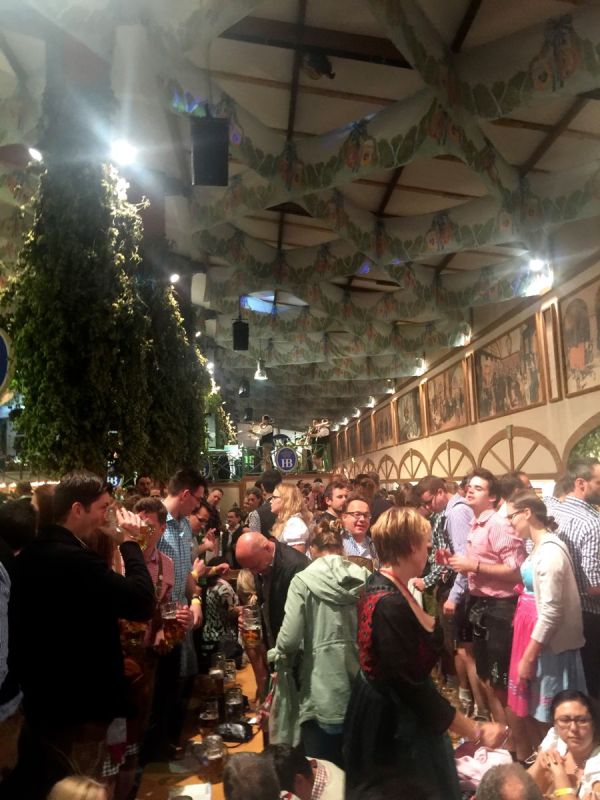 We ended up spending the day in the Hacker tent, a tent popular with English speaking tourists and young people. We did a little research and decided we would have the most fun at Hacker since their band plays a mix of American music and traditional Bavarian music. We befriended some fun loving Canadians, danced all day, and drank stein after stein of beer. 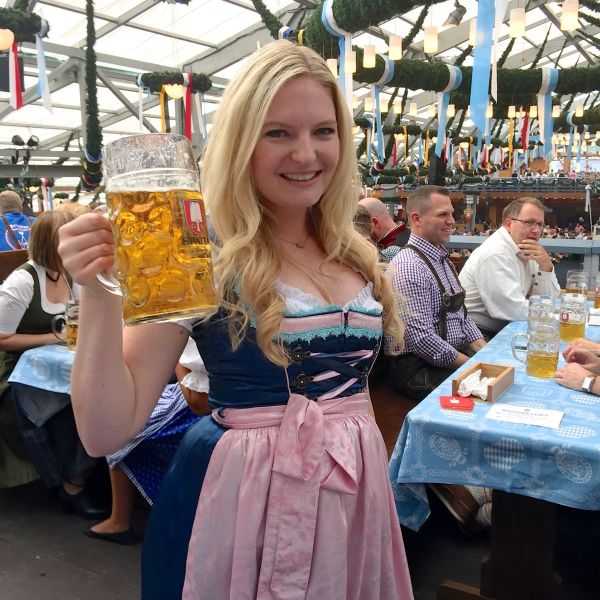 Attending Oktoberfest this year, with my husband who spent half his childhood in Munich and who is fluent in German, was very different. The first big difference? Charles insisted that we purchase traditional Bavarian clothing to wear at Oktoberfest. At first this seemed silly, but I quickly realized that most people at the tents we were visiting would be wearing lederhosen and dirndls. Buying clothing was our first order of business after we settled in. 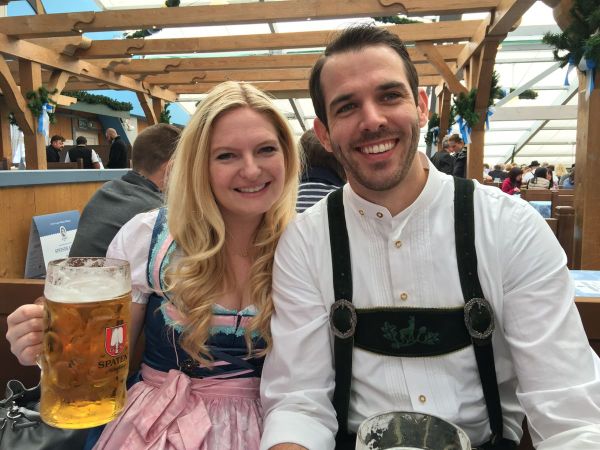 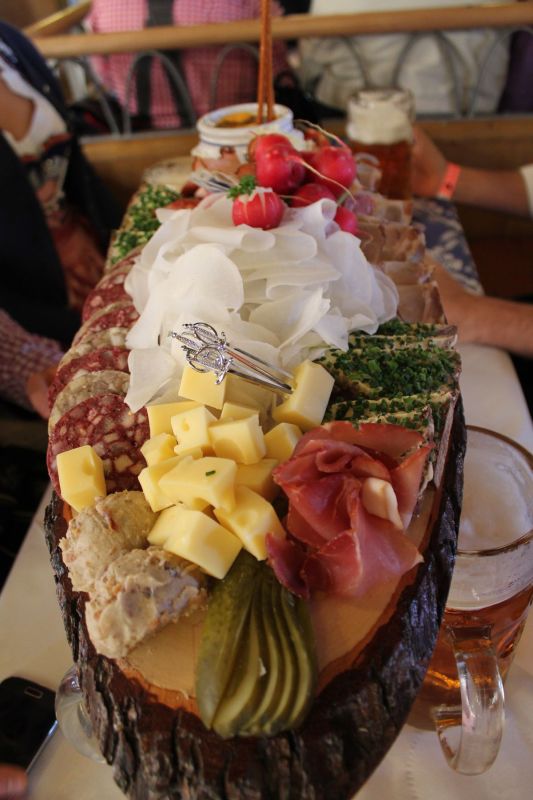 We spent our second day at Oktoberfest at the Brauerosl tent with my husband’s German friends from high school. According to Charles, the Bräurosl is known for being popular with the gay and lesbian locals, and for being more of a party tent. What I know is that the food was seriously good. Charles explained that this tent is still family owned and he suspects that is why more attention is given to the quality of the food. And we ordered A LOT of food. 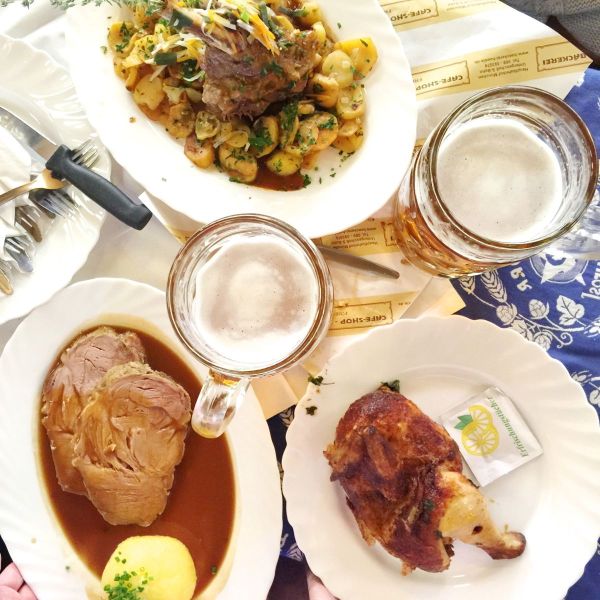 The reason why the food at Bräurosl stands out as being so good is that the tents serve the same traditional foods, and we had tried the same things two days before. The bretzels and obatzda (a cheese spread) were especially great – considering I had almost given up on obatzda. 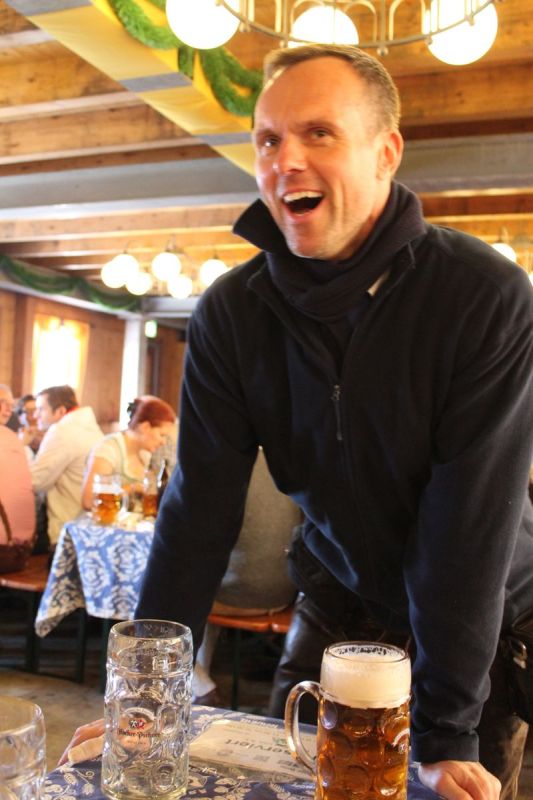 Germans can have a reputation for being unfriendly (I had some pretty crazy experiences with this), but we lucked out with the nicest server at the Bräurosl tent. Sasha is usually a flight attendant for Lufthansa, but he works as a server during Oktoberfest and his welcoming personality made the day even more fun. 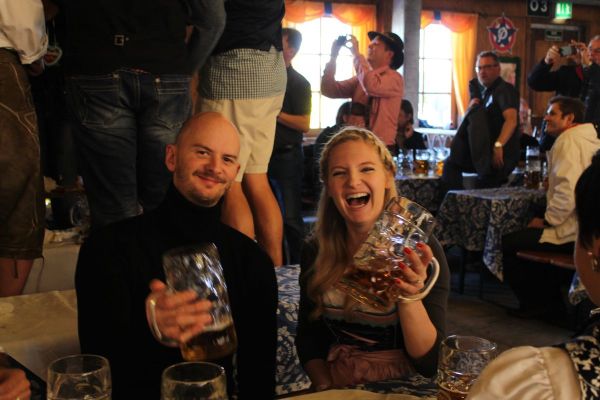 We spent the afternoon at the Bräurosl tent, and then headed to the Löwenbräu tent since a nice American lady had given us her extra drink vouchers for that tent. Then…. things get fuzzy. We met some really fun Canadians and had a round of drinks with them. Before we knew it, it was 10pm and one of us was drunk and needed to find dinner and go home. (Shout out to Canadians for being consistently awesome at Oktoberfest). 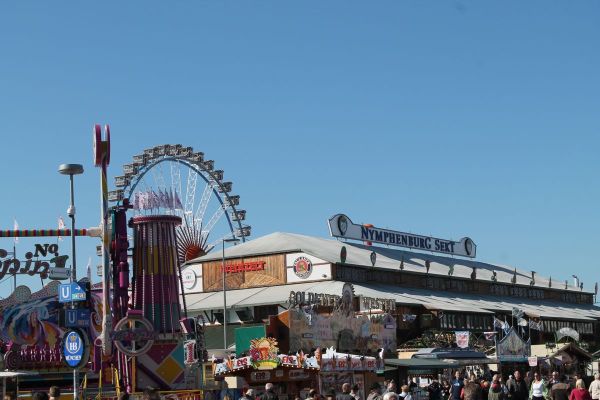 Did I convince you to go to Oktoberfest next year? Here is what you need to know:
It can be difficult to get a reservation for Oktoberfest – you need to plan months in advance. The reservation itself is free, but you will need to pre purchase food and drink vouchers (we spent around $500). Reservation slots tend to be 3 hours, and tables fit 8-10 people. If you are interested in purchasing traditional clothing, many shops pop up in Munich selling it during Oktoberfest (think of how shops pop up in America for Halloween).