Christmas in NYC is extra special. People line up to see the elaborate windows at the 5th avenue stores, ice skating rinks appear in the parks, decorations are wrapped through the inside and around the outside of the buildings, and the calendar fills with special events. There is so much to do in New York City at Christmastime! 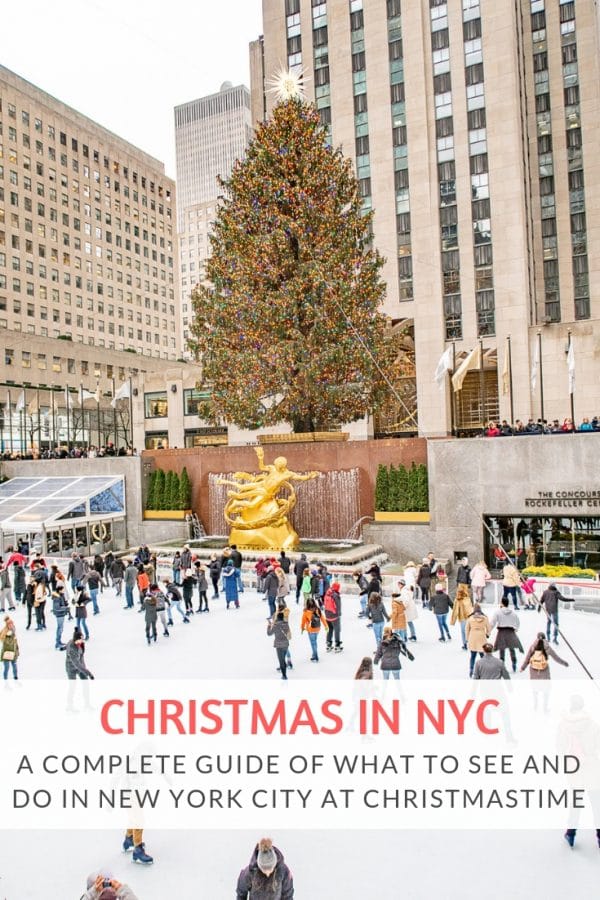 What to do in New York City at Christmastime: 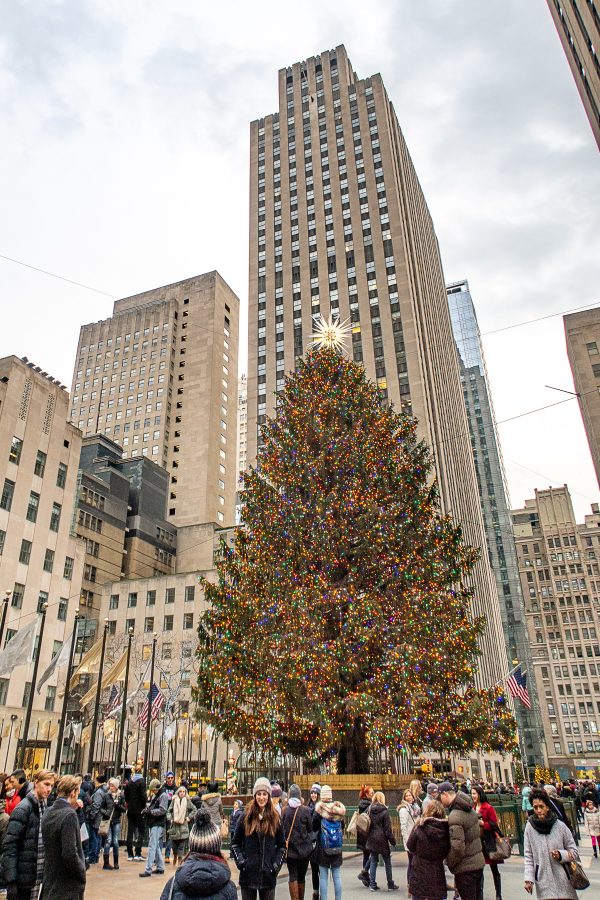 There are lots of Christmas Trees in NYC, but this is the most famous. Heads up – it will be crowded – even in early January. While you are in Rockefeller Center you might want to skate on the famous ice rink and check out the 5th Avenue window displays. 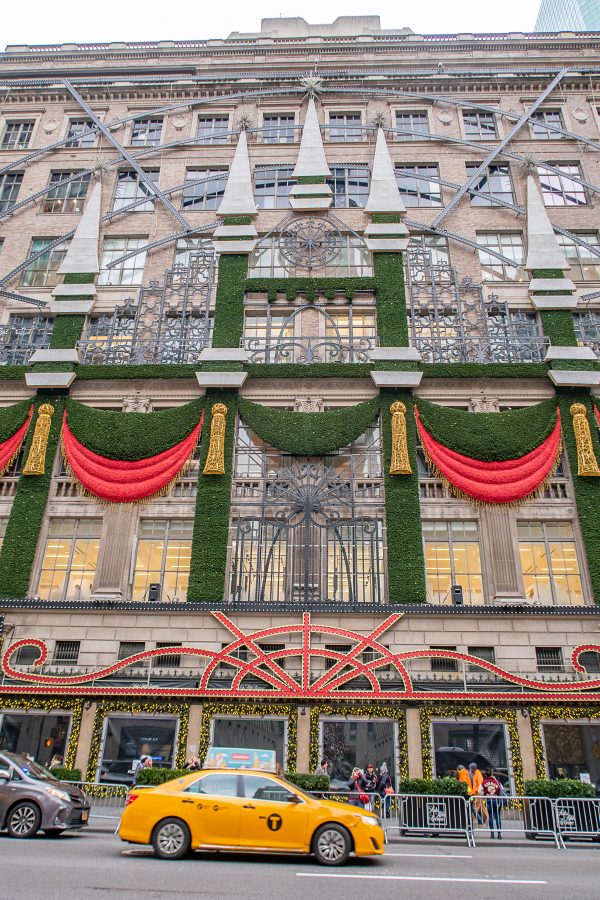 The flagship Saks Fifth Avenue goes all out when it comes to their holiday decorations and decorates the outside of their building, and at night has a light show! 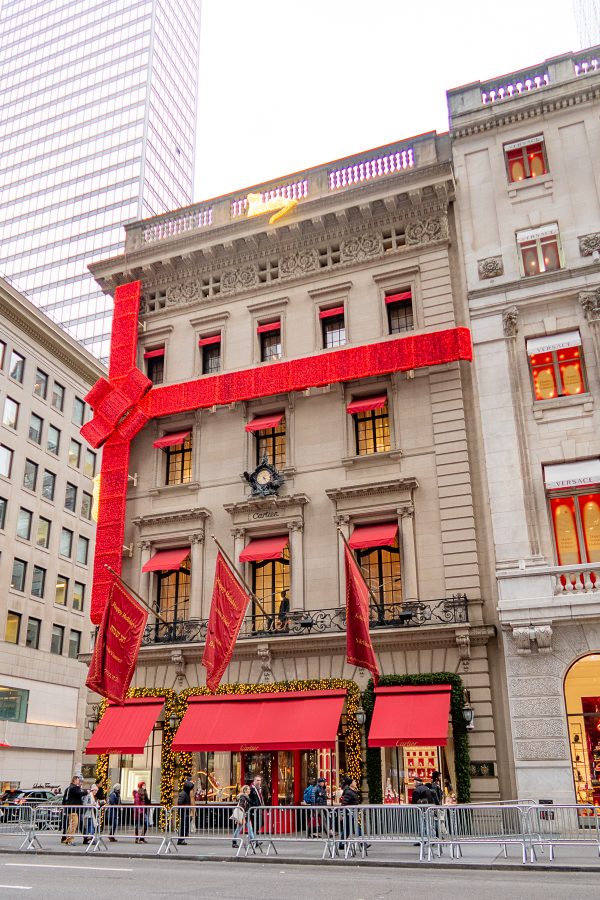 Admire the decorations and windows along 5th Avenue:

The Christmas windows and decorations along Manhattan’s most iconic shopping street are not to be missed. Cartier wraps itself up in a bow, and Bergdorf Goodman, Tiffany, and Barney’s all have show-stopping window displays. 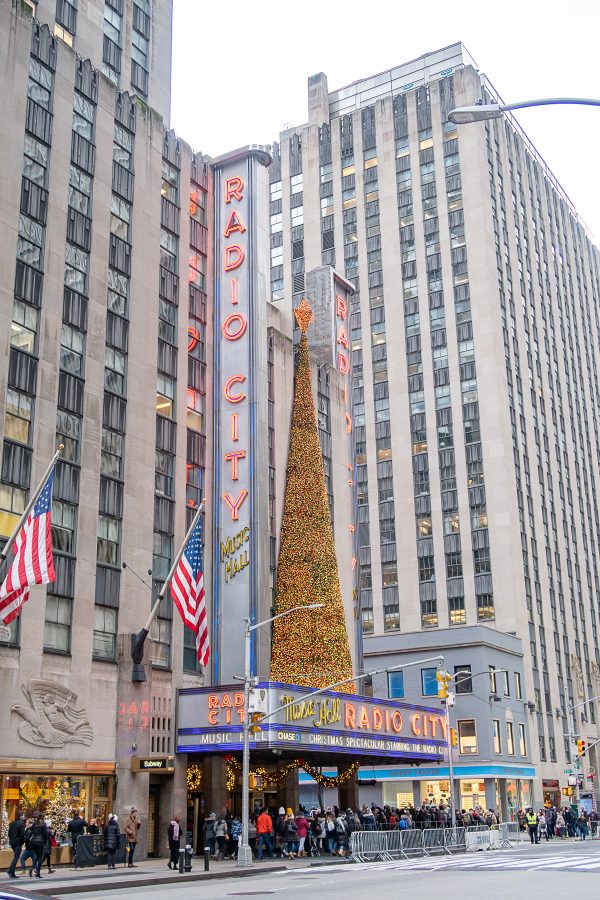 Christmas Spectacular Starring the Radio City Rockettes has showcased women (between 5’ 6” and 5’ 10½”) in elaborate costumes doing high kicks since 1932! It is a little cheesy, but it is still a fun family friendly show. Plus! You get to see the inside of the wonderfully designed Art Deco Radio City Music Hall.

The New York City Ballet performs The Nutcracker at Christmastime. 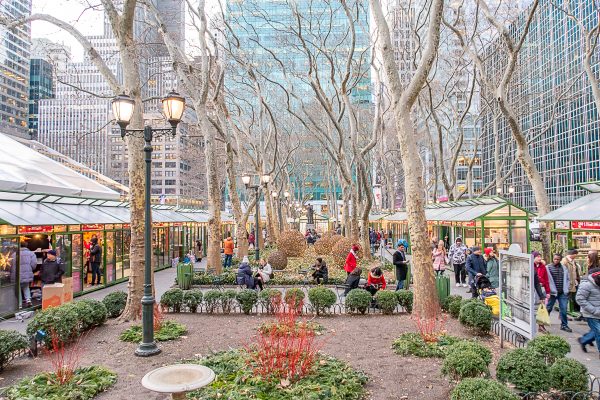 A holiday market and ice skating rink take over Bryant Park in December and early January. 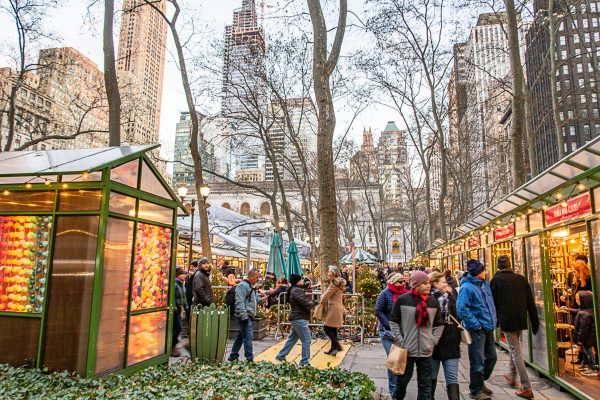 The market is filled with food vendors, crafts, and other unique gifts. 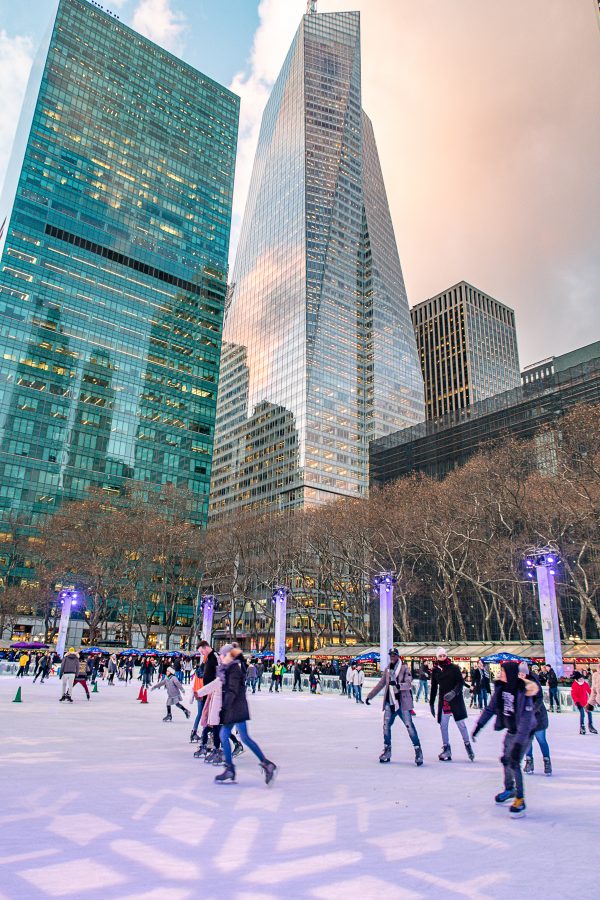 Plus, there is an ice skating rink at the center of winter village. 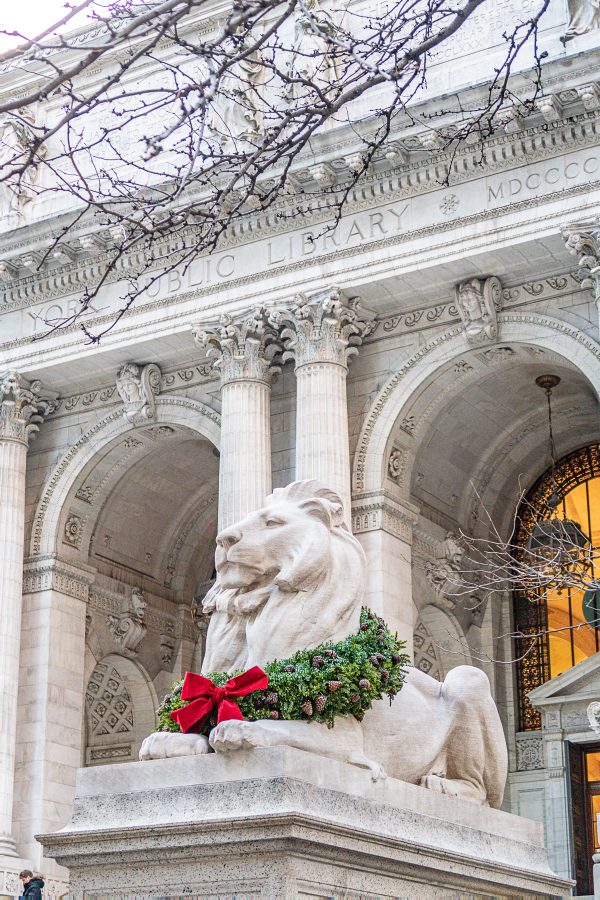 If you are going to Winter Park, you might want to check out the lions at NY Public that get decorated with wreaths for the holidays. Winter Village is just beside the library. (You can go inside the library and see the beautiful reading room and a display with the original Winnie the Pooh). 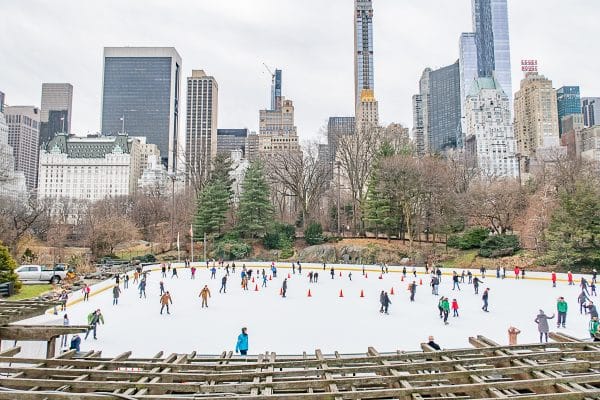 NYC has several ice skating rinks, and some of the most popular can be found at Rockefeller Center, Bryant Park, and Central Park. The Rockefeller Center Rink is very popular and you should plan to spend some time waiting in line. The Wollman Rink in Central Park tends to be the least crowded. 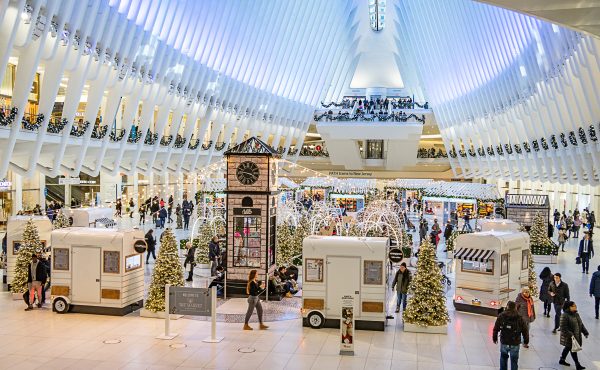 Shop at the Holiday Pop-Up Markets:

There is an interior holiday market within The Oculus. There is also a market at Grand Central Station. Both have a mix of shops selling food and gifts.

Have a drink in a rooftop Igloo:

230 Fifth fills their rooftop with clear igloos in the winter. 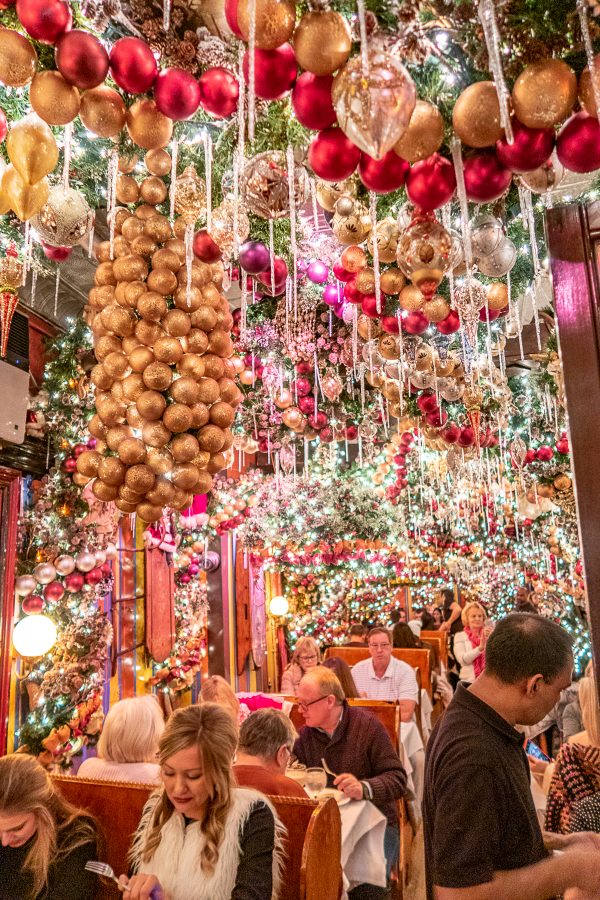 Have a cocktail at Rolf’s German Restaurant:

No restaurant takes Christmas decorations more seriously than Rolf’s. Every inch of the ceiling at this restaurant is covered with garlands and ornaments. The craziest thing might be that the decorations are up from after Thanksgiving until May, yes, May. It’s so over the top that it needs to be seen in person to be fully understood.

One of my favorite bars in NYC, Oscar Wilde is famous for having the longest bar in the city, and excellent cocktails. They do a fine job decorating for the holidays and it is a fun place for a festive drink. 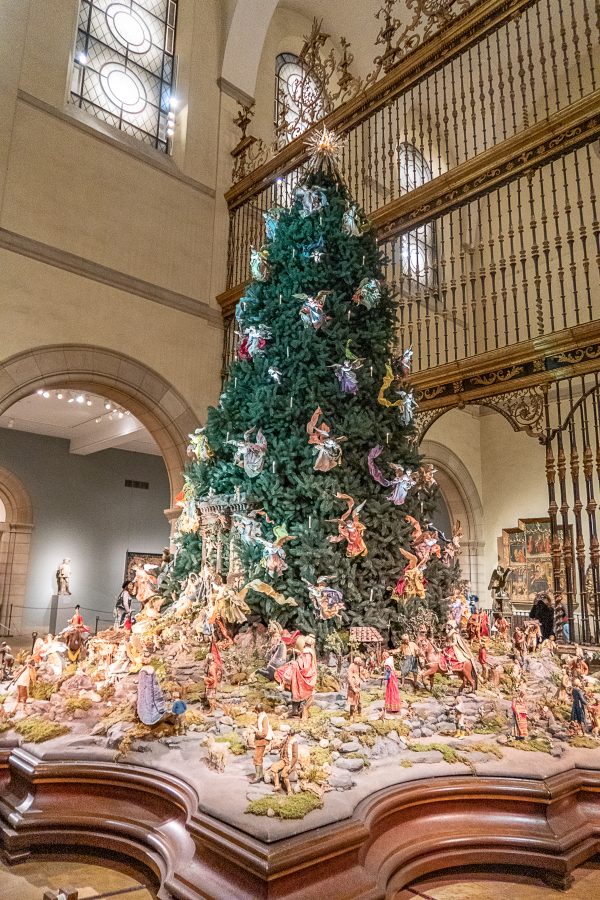 See the Christmas Tree and Neapolitan Nativity scene at The Met:

Each year New York City’s most famous museum gets into the holiday spirit by displaying at massive Christmas Tree surrounded by an eighteenth-century nativity. Angels in silk robes decorate the tree. The tree is on display from Thanksgiving until early January, check The Met’s website for exact dates, and the exact location of the tree.

Have you spend Christmas in NYC? Do you have any favorite things to do? Let me know in the comments!

so magical! it really looks like in the movies:) maybe one day I get to see it for myself too