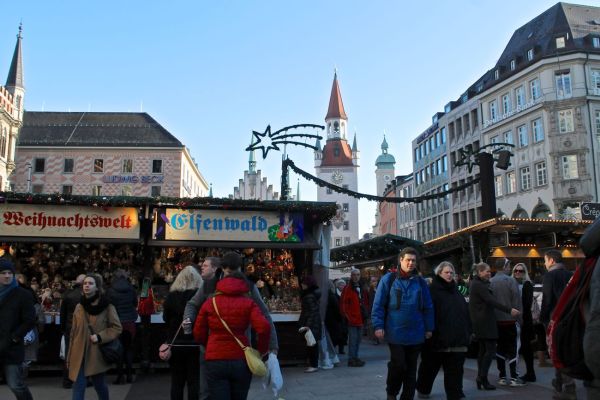 In December, Charles and I spent Christmas with his family in Munich. One thing I was excited for was visiting Munich’s Christkindlmarkts and drinking glühwein. I had been to Chicago’s Christkindlmarket and was excited to explore the traditional German markets that inspired it. Munich’s first Christkindlmarkt was in 1310, and they are common throughout Germany, Austria, and parts of France and Switzerland, plus other cities around the world. 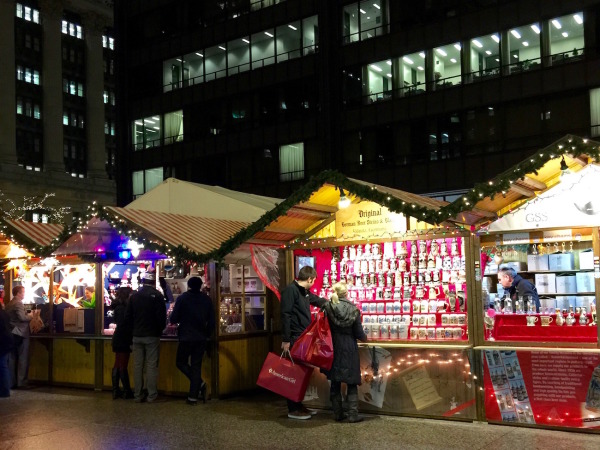 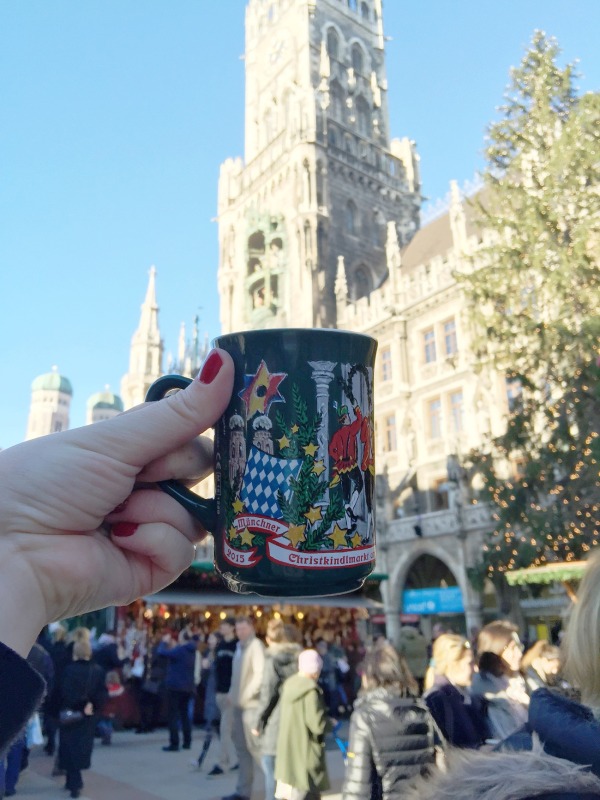 In Chicago everyone goes to Christkindlmarkt to drink glühwein, but in Munich, there are more options. The Munich markets have several stands selling glühwein, feuerzangenbowle, jagertee, and other warm alcoholic drinks. Glühwein is mulled wine. Usually it is made with red wine, but we did have some that was made with white wine and sherry (we preferred the red glühwein). Feuerzangenbowle is mulled wine that has a rum soaked sugar cube burnt over it. The result is sweeter and stronger than glühwein. Jagertee is made with red wine, black tea, rum, plum brandy, orange juice, and spices. Each stand serves up drinks in mugs with different designs, all marked with the year. You pay a deposit for the mugs which you get back once you return them. I only saw mugs in the shape of boots at one stand, the others were just basic small mugs with festive patterns. 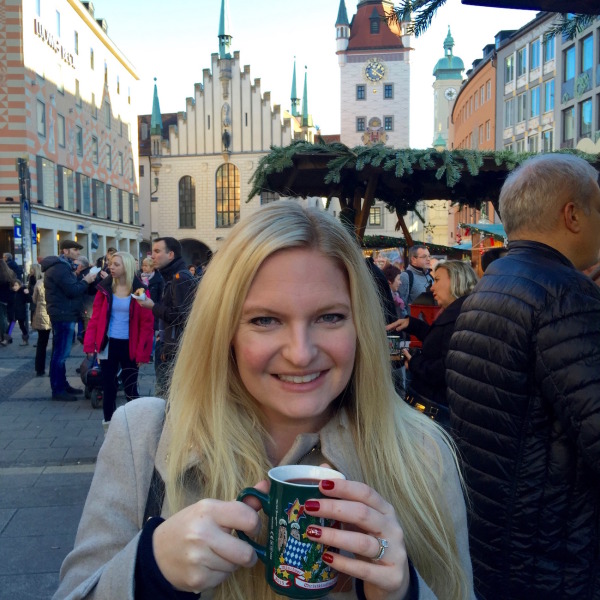 The first Christkindlmarkt was the most famous, the Munich Christmas Market is a large market in Marienplatz. Since this is Munich’s original Christkindlmarkt, and it is centrally located, it is a bit touristy. 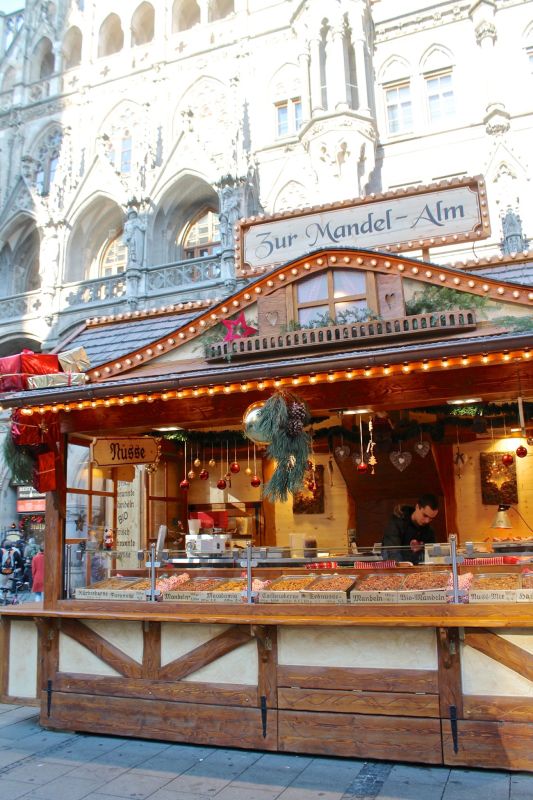 The markets serve food too. Bratwursts, French Fries, Crepes, flat breads with toppings, and desserts were sold at all of the markets we visited, while other markets also had fire roasted salmon and more elaborate cuisine. 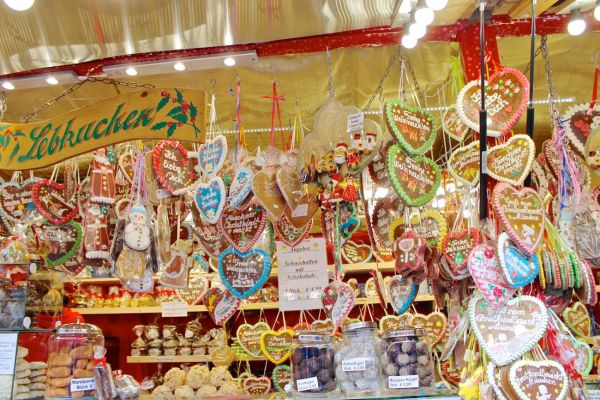 Remember those decorative cookies that Germans buy and wear around their necks, that we attempted to eat at Oktoberfest only to learn that they tasted like gingerbread and cardboard mixed together? They sell them at Christkindlmarkts too. 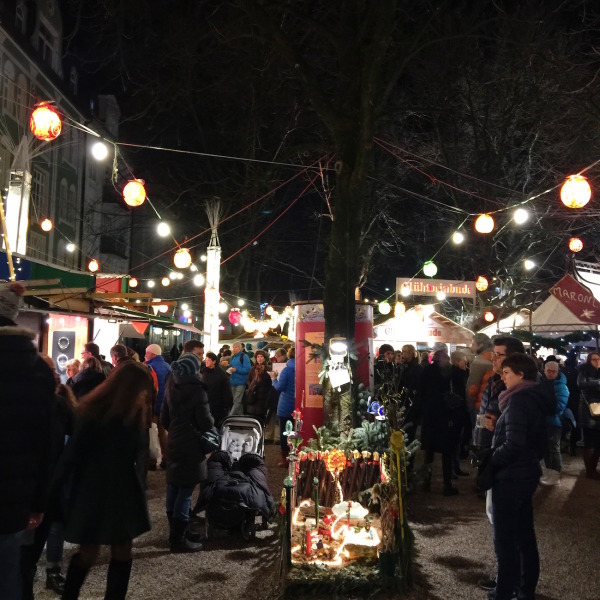 Next we went to a smaller market the Schwabinger Weihnachtsmarkt in Münchner Freiheit neighborhood where we were staying. This market was livelier than the Munich Christmas Market. 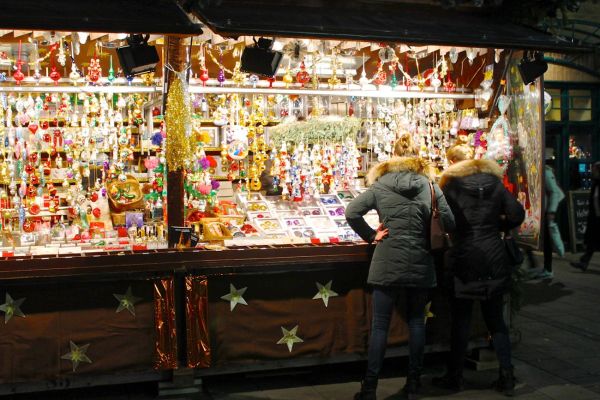 There were lots of stands selling food and drinks, all sorts of crafts and jewelry for sale, and a band playing in the middle. (Let’s just say that Katy Perry songs aren’t great when sung with a thick German accent). This market was definitely filled with locals and not tourists. This is where we tried “Classy Glühwein” made with white wine and sherry (we preferred traditional glühwein). 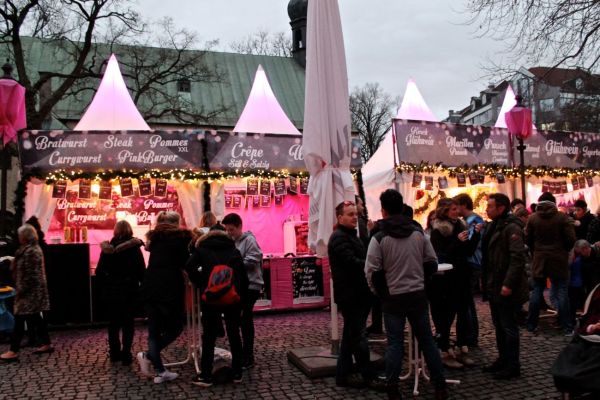 A couple of days later, we checked out the Pink Christmas market in Stephansplatz. This is in the Glockenback district, a neighborhood popular with the gay community. At this market the stands are set up in white tents that are illuminated in pink. This was the smallest of the markets we visited. 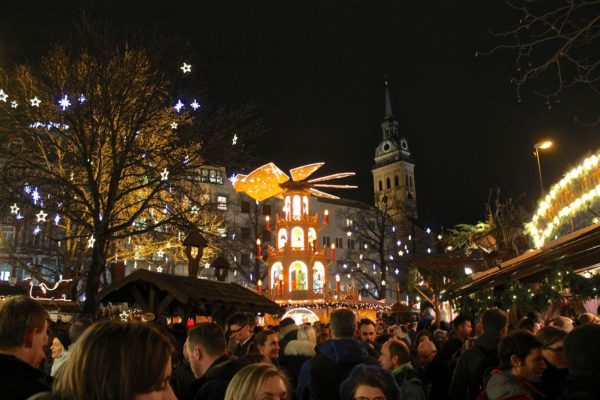 The last market we visited was my favorite. Sternenplatzl at Rindermarkt was the liveliest of all of the markets, and they had the best glühwein. 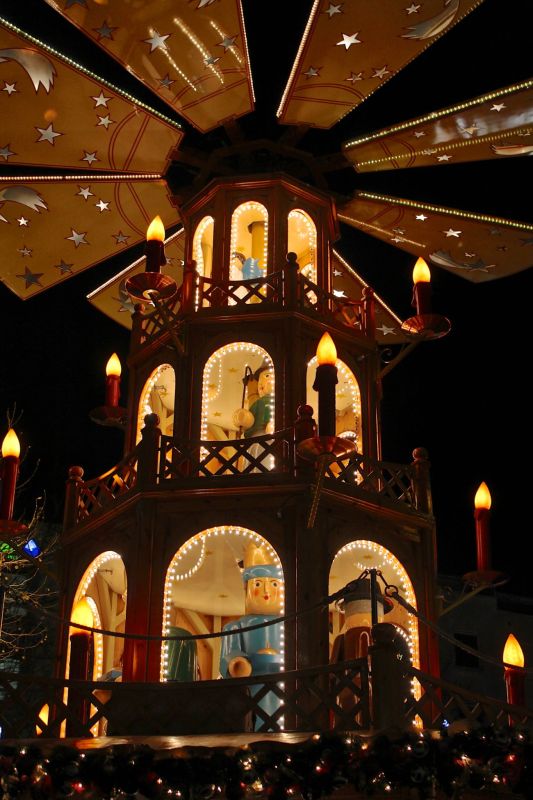 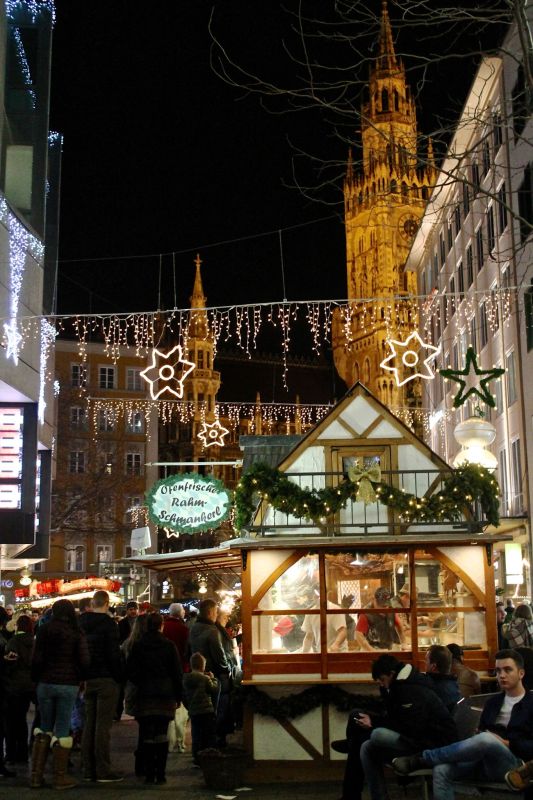 In America we tend to extend Christmas festivities through the New Year, but in both Chicago and Germany the Christkindlmarkts close on Christmas Eve. If you travel to Munich during the Christmas season you can kick off your trip with a visit to the Christkindlmarkt at the airport – which is the only market that stays open until New Years.

I loved exploring the Christkindlmarkts in Chicago and Munich this year, and if you ever have the opportunity to visit one, I highly recommend it. The less touristy markets gave us an opportunity to meet some locals, something that can be hard to do when you are traveling.