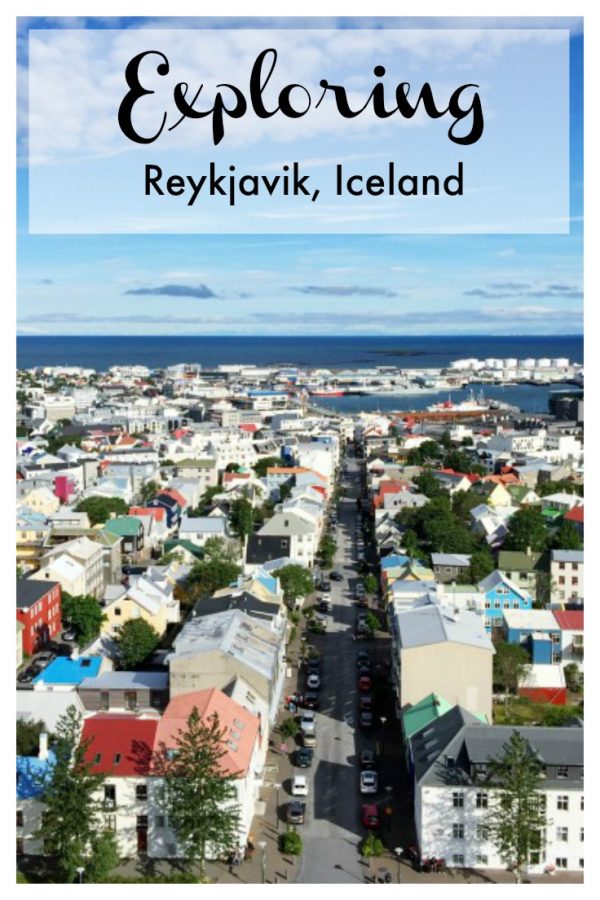 Iceland had been on my bucket list ever since I heard about their stopover program 12 years ago. It’s simple. If you book a flight on Icelandair, you can stay in Iceland for up to 7 days on your way to Europe, without paying any extra fees. The flight to Reykjavik is just 5 ½ hours from Chicago, and most European cities are just 2 ½ – 3 hours from Reykjavik when you continue your journey. 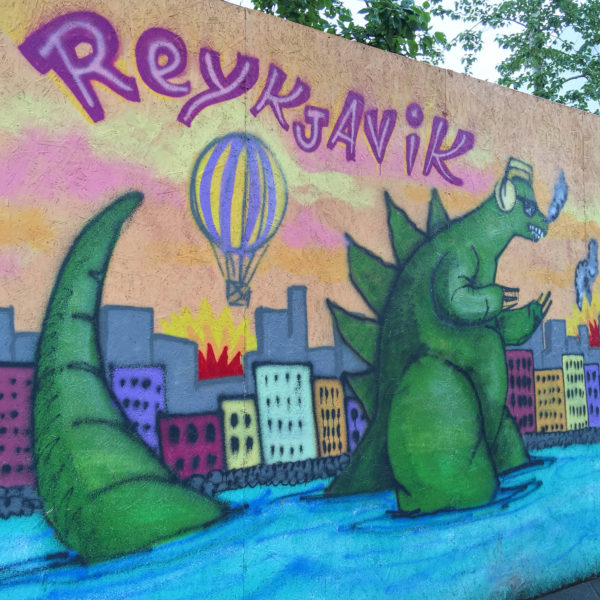 We spent 4 days in Iceland on our way to London to visit our families. Lucky for us, our friend Libb (she was also in Munich with us) happened to book a trip to Iceland with her friend Mick for the same exact days. Together we explored the Golden Circle, partied the nights away at Reykjavik’s bars, tried fermented shark (to say it is gross is an understatement), and watched the sun dip into the sea but not set. Today I am going to kick off my series of posts about Iceland by telling you about Reykjavik. 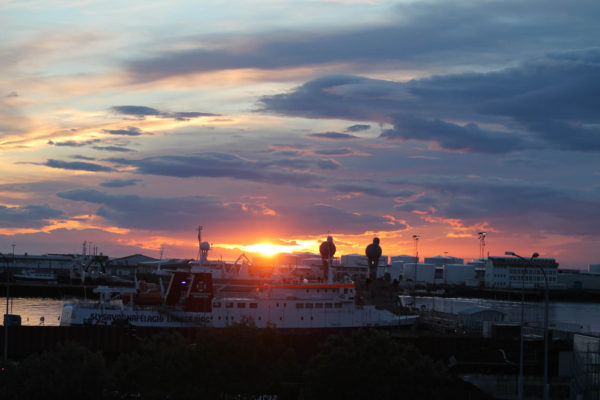 Reyjkavik is the northernmost capital in the world. The locals assured us that it doesn’t get that cold in the winters, and I can tell you that is doesn’t get warm in the summer either. In the summertime be prepared for temperatures between 45-65. You’ll want to pack lots of layers – most days I wore a light sweater and a thick rain jacket/windbreaker. The other thing to be prepared for? The sun will not set – the photo above shows the farthest point the sun would set when were in town. It’s incredible, but it will mess with your internal clock. 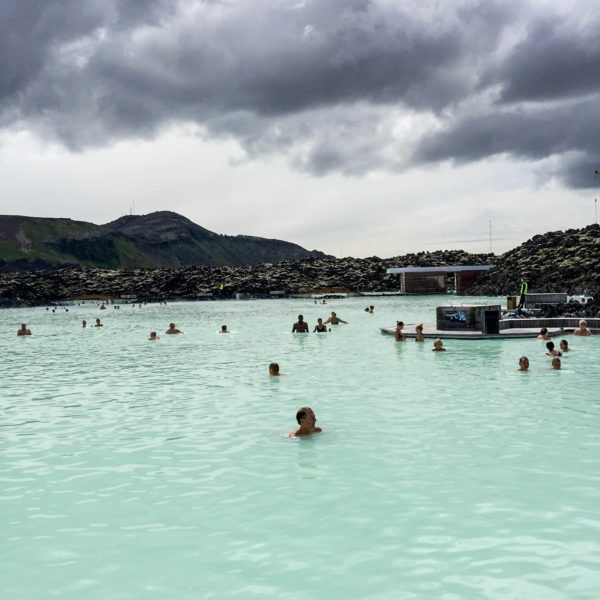 The first thing we did upon arrival in Iceland was to visit Blue Lagoon. The famous hot spring is located between the airport and the city, and there are buses that will take you from the airport to Blue Lagoon. 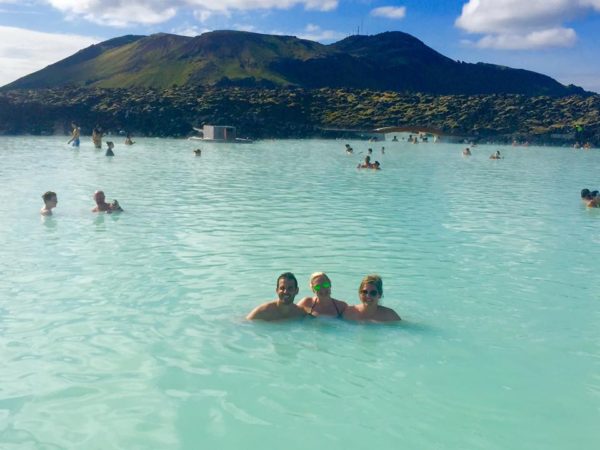 Once you get to Blue Lagoon, there is a place to check your bags. Plan ahead by doing two things: 1. Pack your bathing suit and an outfit to change into in an easy to access place, and 2. Make reservations for Blue Lagoon. Fly Bus is the bus service that gets you from the airport to Blue Lagoon and from Blue Lagoon to Reykjavik, you might want to buy tickets ahead of time (you can buy them on the flight). And consider making a lunch reservation at Lava, Blue Lagoon’s restaurant. 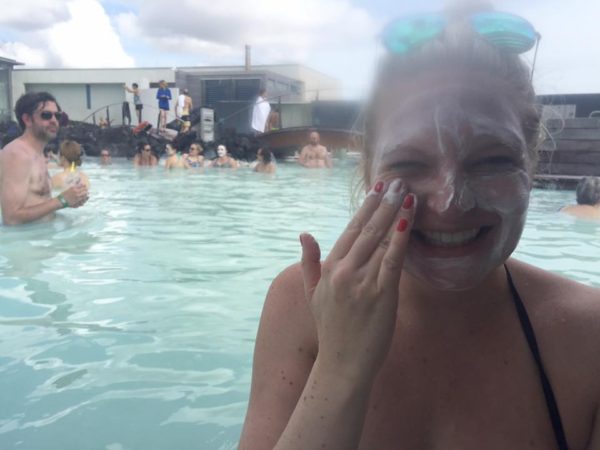 At Blue Lagoon you get to lounge around in super warm water (it’s the perfect bath water temperature), and use Blue Lagoon’s amazing face masks. And just when you think life couldn’t be any better – there is a bar, so you can sip Prosecco while treating yourself to a face mask and a soak. The experience was the perfect welcome to Iceland. 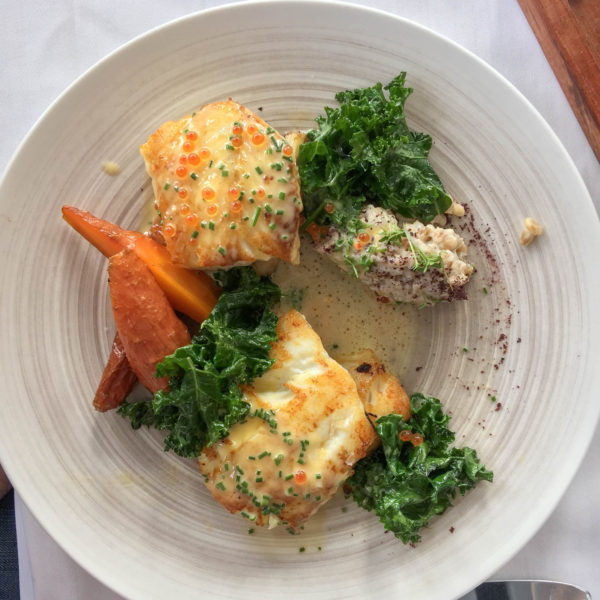 In addition to making Blue Lagoon hot spring reservations, we made lunch reservations at their restaurant, Lava, which was excellent. Charles had this gorgeous fish of the day (Haddock). Later during our trip, a tour guide recommended ordering the fish of the day at any restaurant, telling us that it is guaranteed to be something fresh and delicious. 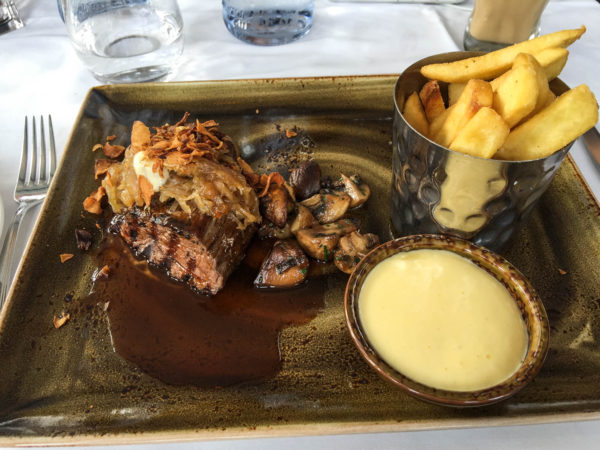 I had beef tenderloin with caramelized onions, wild mushrooms, bearnaise sauce, and steak fries. Both of our meals are a good representation of Icelandic cuisine. The diet consists of fish and hearty meat dishes, and French Fries are incredibly popular. Lava’s space is formal, but the dress code is casual – some people were eating in bathrobes. After about 4 hours at Blue Lagoon (it was the perfect amount of time for the hot spring and lunch), we hopped on a bus to Reykjavik which dropped us off right at our hotel. 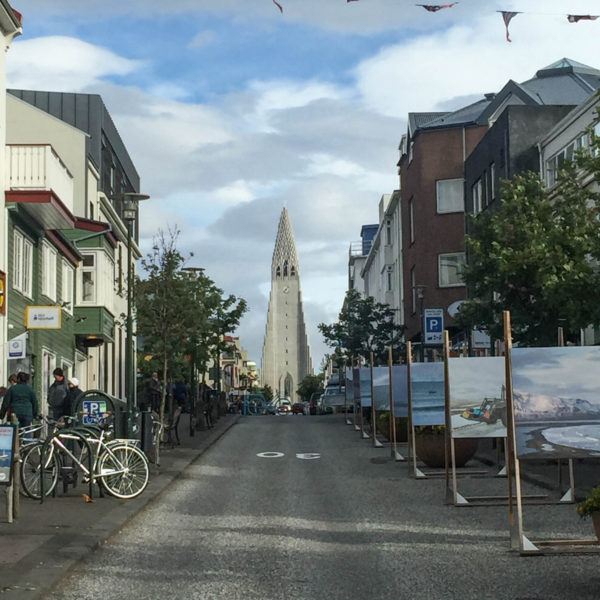 We spent the afternoon exploring Reykjavik. The city is small and easily walkable. The main street is Laugavegur and it is where you will find boutiques, bars, restaurants, and tourism offices where you can book tours and get information. We spent a good amount of time on this main stretch. Laugavegur  also offers views of Hallgrimskirkja Reykjavik Cathedral. 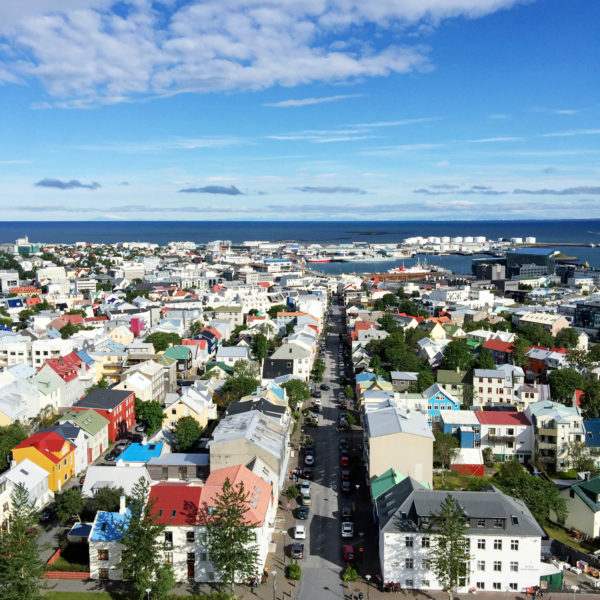 Hallgrimskirkja Reykjavik Cathedral is just off of Laugavegur, and has beautiful views of the city. You can really appreciate the colorful homes when you can see them from above. You will likely find yourself near the cathedral since it’s in the middle of the city; definitely stop in to admire the view. 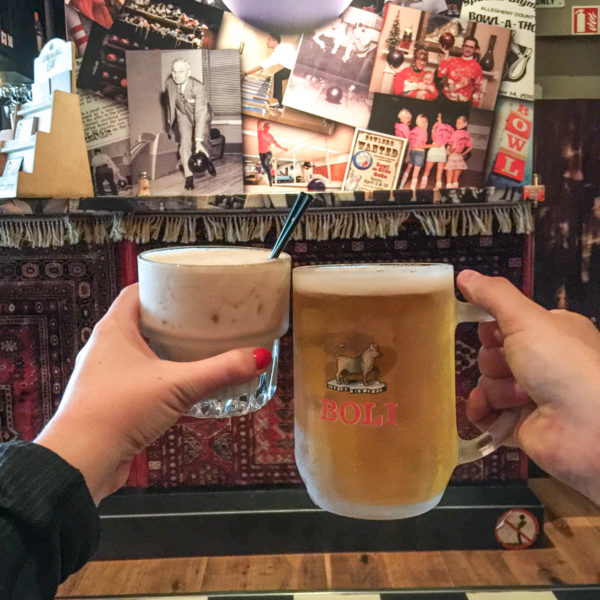 We had lots of fun walking around Laugavegur exploring. One of our favorite places to hang out was Lebowski Bar, a Big Lebowski themed bar with 17 different White Russians on the menu. I highly recommend the White Chocolate White Russian. 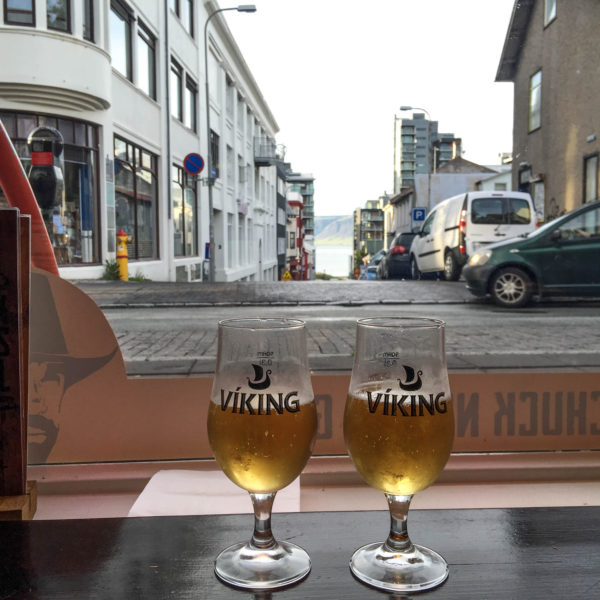 Later that night we met up with Libb and Mick again and we grabbed locally brewed beers at the Chuck Norris themed restaurant/bar. It was such a silly concept that we couldn’t resist.

On our second day in Reykjavik we went on a walking tour through the city. The tour was free (you just tip the guide) and we learned all about the city’s history and Icelandic culture. 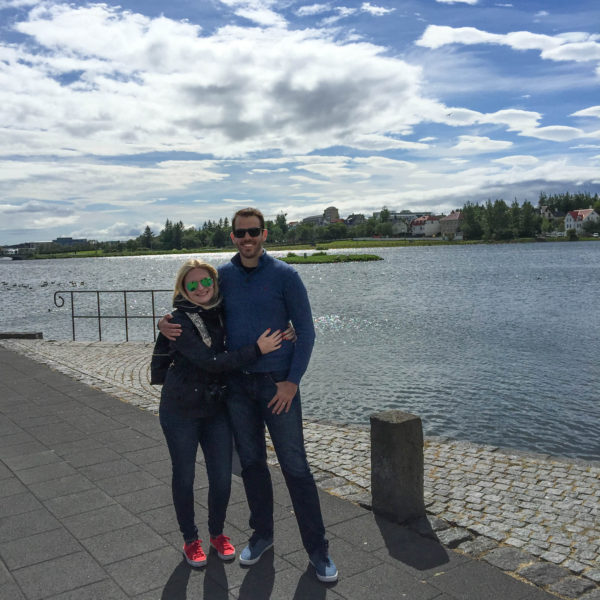 The tour guide taught us all about traditional Icelandic food, daily life, and current events. He explained that medical care and education are free in Iceland, but that Icelanders pay over 30% in taxes. 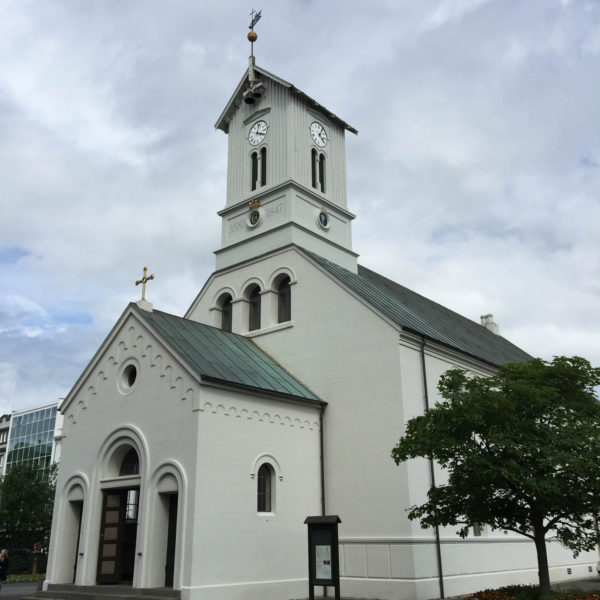 He also told us that there is a very very low crime rate in Reykjavik and that the police run a popular instagram account. 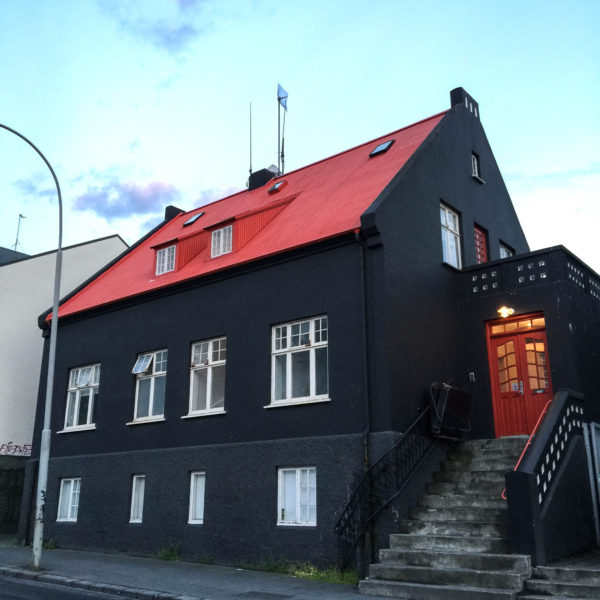 My favorite part of the tour was seeing the homes in the old section of Reykjavik. Many of the old homes are built with wood that is covered in colorful corrugated steel, which protects the homes from the harsh winds. 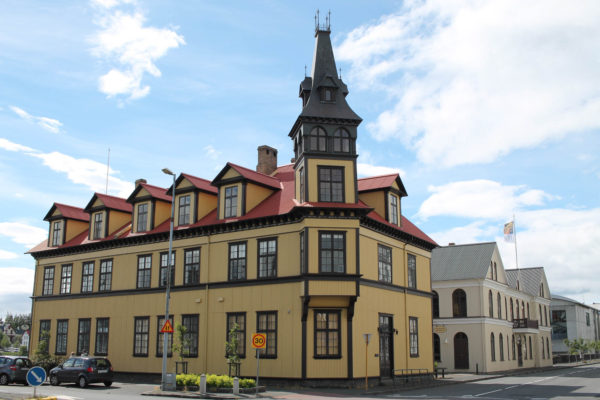 One of the most fascinating things that we learned was that 95% of the Icelandic population is related within 7 generations. People have developed a website and an app so that Icelanders can research their family tree… and make sure they don’t start a relationship with anyone too closely related. 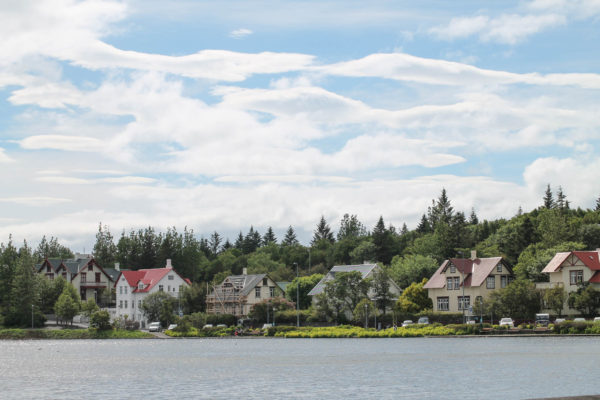 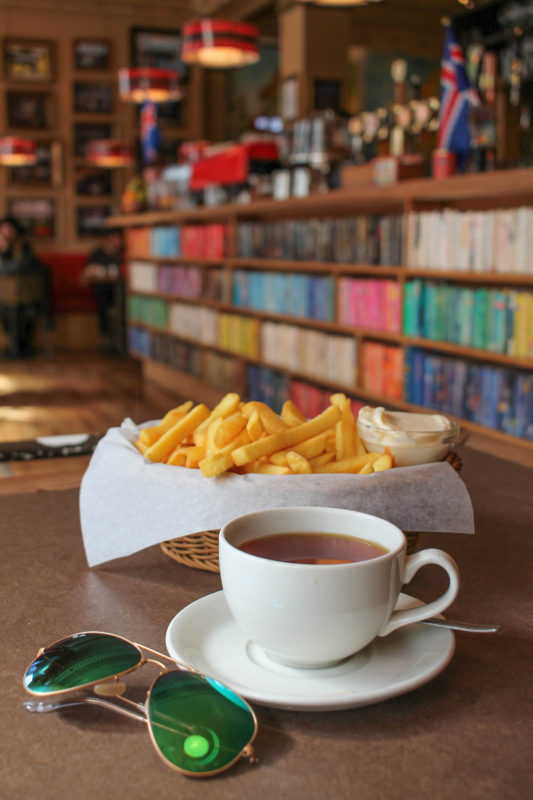 After the walking tour we warmed up with coffee, tea, and a giant bowl of French Fries at Laundromat Cafe. 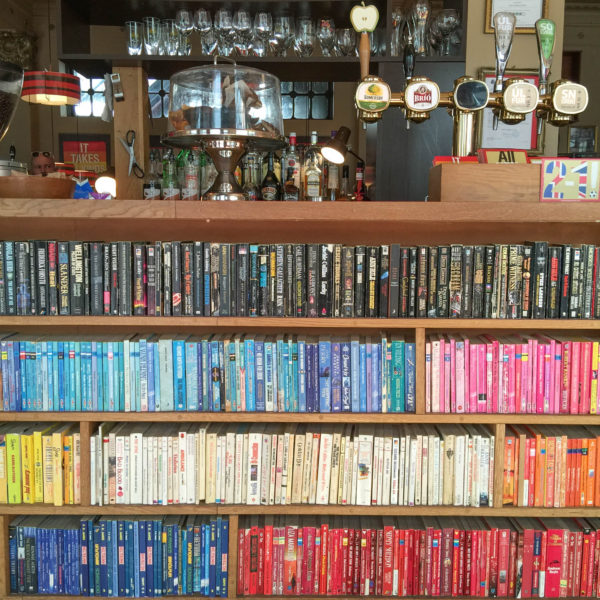 I loved the vibe of this place – and the perfectly organized books. It’s part coffee shop, part restaurant, and part bar, with a laundromat in the basement. Libb, Charles, and I agreed that the US needs more bars/coffeeshops. 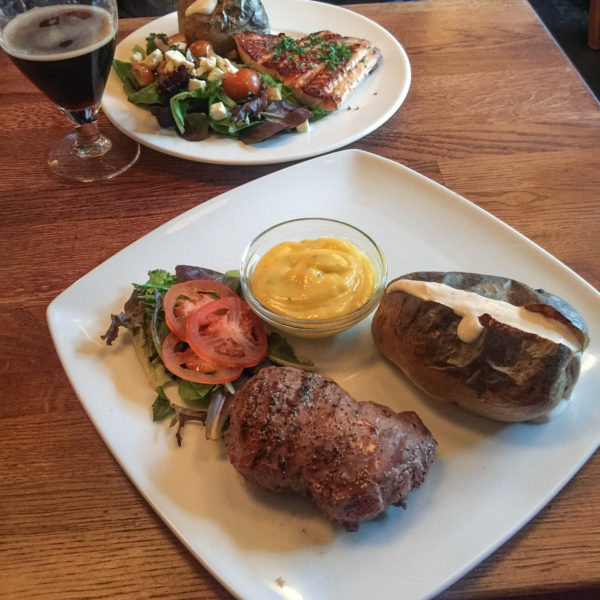 While the culinary scene in Iceland isn’t quite as notable as Chicago’s, we did have some pretty good meals. We had the catch of the day and the lamb at Restaurant 73, along Laugavegur. The lamb is all pasture raised and extra flavorful. The meals at Restaurant 73 were simple, but good. 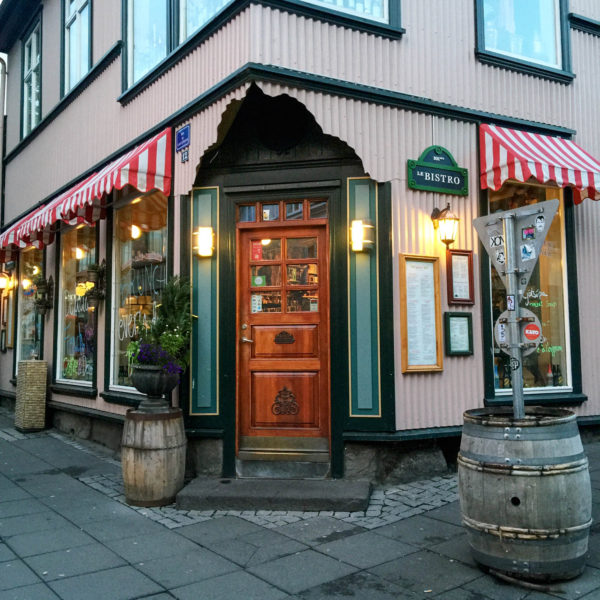 On our last night in Iceland we ate at this small French Bistro, called Le Bistro. This is where we tried (and were disgusted by) fermented shark, Kæstur hákarl. Based on my brief research, the shark is fermented because it is poisonous when fresh. You can watch me try fermented shark in the second video in this post. Anthony Bourdain said it was “the single worst, most disgusting and terrible tasting thing” he has ever eaten. I agree. 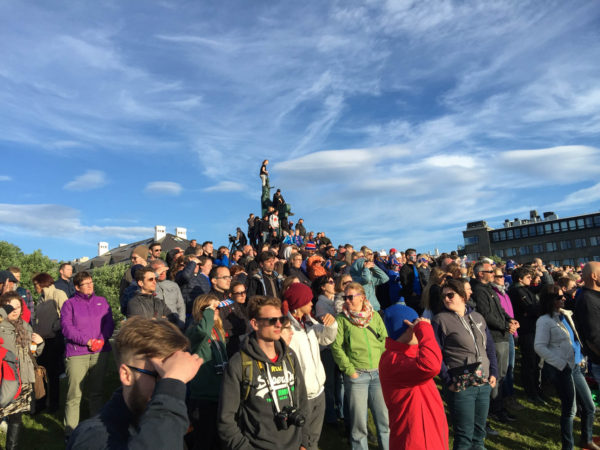 An unexpected highlight of the trip was that we were in town for the Euro Cup semi-finals. As an American, I don’t really care about soccer, but the fact that Iceland made it to the Euro Cup semi-finals was a REALLY BIG DEAL. This year was the first time that the team qualified for a major tournament, and their win against England is considered to be one of the biggest sports upsets of all time. Iceland played France in the semi-finals and some businesses shut down for the day so the their employees could enjoy the game.

Thousands of people gathered in the city square to view the game together. While Iceland lost, their national pride was infectious and unlike anything I had ever seen before. At the end of the game the thousands of fans did the traditional slow clap, the “Huh” one last time. The Icelanders were cheering and chanting “Áfram Island!” (which translates to “onward Iceland”) all night long. They were just to thrilled that the team made it that far. 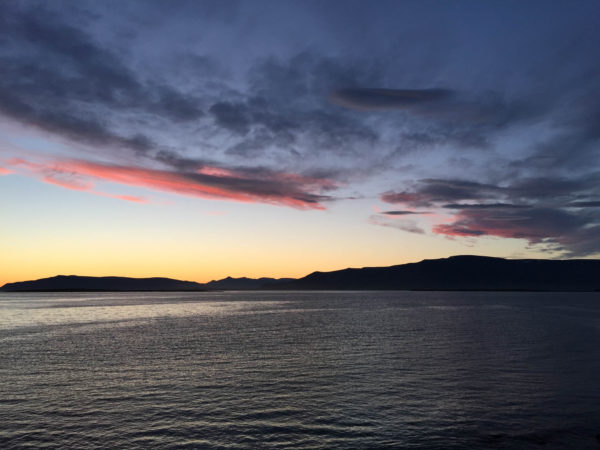 I should let you know that Icelandair operates more like a budget airline than a major European airline, and this is surprising and disappointing when you pay $1500 for your flight. While I am accustomed to the free beer or wine on a flight over the Atlantic, you don’t even get peanuts on Icelandair. Oh, and if they lose your luggage, it might take them 3 days to get it to you. And if your connecting flight to Reykjavik on your way home is just 20 minutes late, they won’t hold the plane, you might be stuck in Iceland for 24 hours. My friends were the recipients of this bad luck, but they handled it with grace.

P.S. Here is a link to the Airbnb where Libb and Mick stayed. We stayed at Hill 22 Hotel, it was basic but good.