This recipe for Butternut Squash and Kale Stuffing is a simple twist on a classic Thanksgiving stuffing recipe that incorporates some extra vegetables. This is an easy recipe that blends fall flavors with fresh veggies. 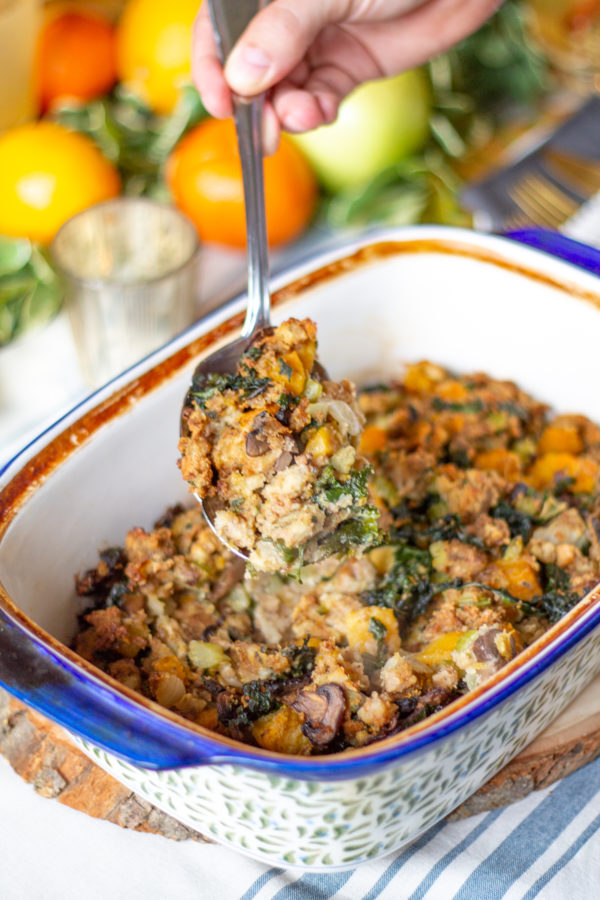 This stuffing is made with butternut squash, kale, mushrooms, onion, and shallot and is seasoned with sage, thyme, and parsley. Once you sauté the vegetables you mix them in with a store-bought stuffing mix – this is an easy to prepare recipe that doesn’t require much active preparation time. 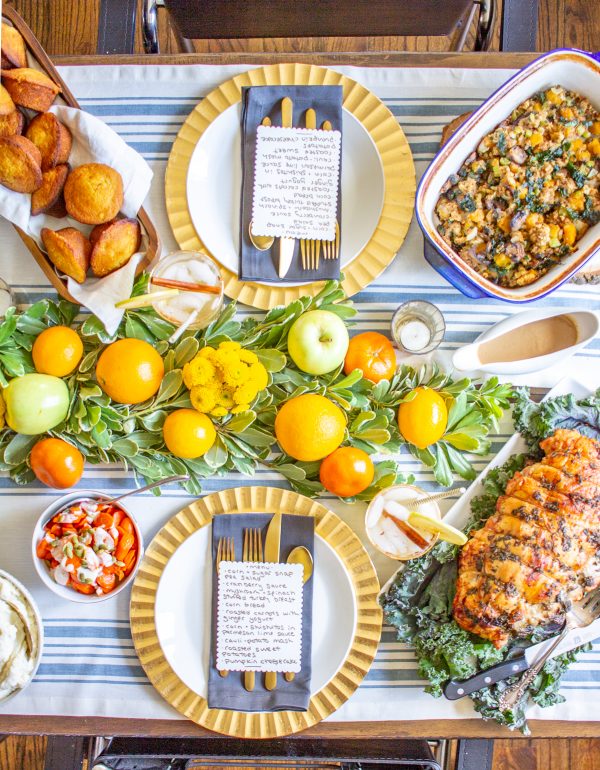 Each year I work to create a new Thanksgiving Menu for this site, and this year I wanted to focus on sharing recipes that are a little healthier than most Thanksgiving recipes. An easy way to make a recipe a bit healthier is to add more fresh vegetables, which is exactly what I did with this Butternut Squash and Kale Stuffing recipe. 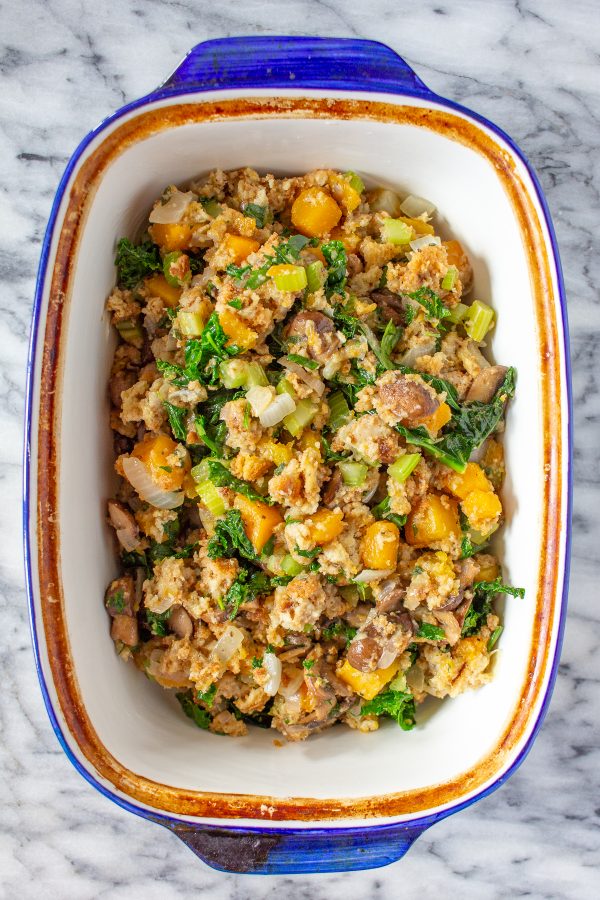 I know that kale can be divisive but, in this recipe is adds a nice little fresh texture without making the stuffing taste like kale. You could opt to use collard greens or frozen spinach instead, but I loved the texture of the kale. It doesn’t get soggy like spinach does. 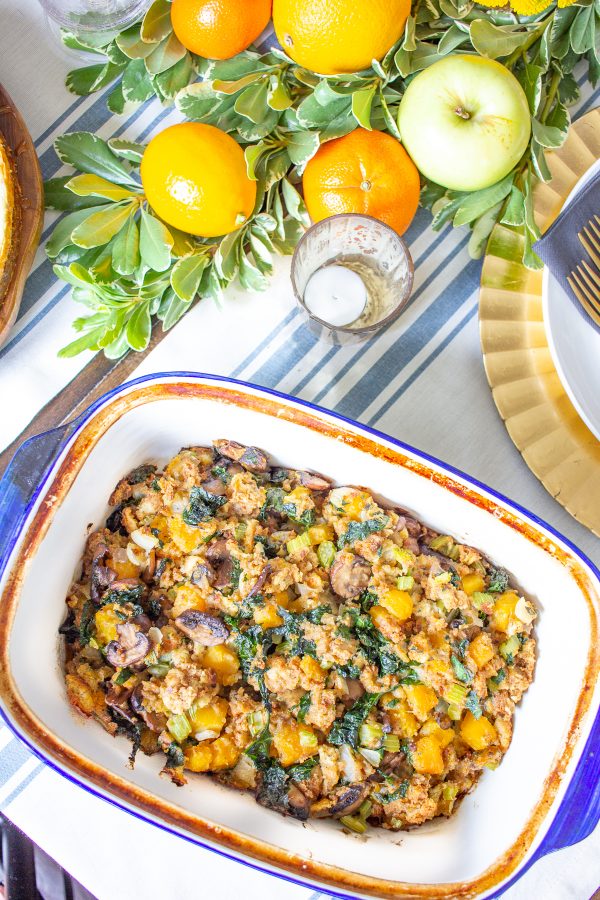 Butternut squash is very difficult to cut. I highly recommend spending the extra couple dollars to purchased diced butternut squash at the grocery store. I would rather spend a couple bucks than risk cutting myself as I attempted to slice through a tough and awkwardly shaped squash. Pre-cut squash is a great timesaver, and I will happily embrace anything that makes Thanksgiving dinner preparations faster and easier. I use pre-sliced mushrooms too.

I used an equal amount of mushrooms and butternut squash in this recipe.

You can prepare this Butternut Squash and Kale Stuffing a day in advance, just wait to bake it until the next day.

If you want to try another stuffing recipe, I recommend this Chorizo and Sage Stuffing from last year’s Thanksgiving Menu. It is a hearty meaty stuffing recipe that my husband couldn’t get enough of.

How to make Butternut Squash and Kale Stuffing:

Melt 1 tablespoon of butter in a dutch oven over medium heat. Add the mushrooms, season with salt and pepper, and let cook until they have browned. This will take about 6 minutes. Set aside.

Melt the remaining butter in the same dutch oven over medium heat. Add the butternut squash, onion, shallot, sage, and thyme. Season with more salt and pepper. Let the vegetables cook for about 6 minutes until they are almost tender. Then add the kale and let cook for another 2 minutes.

Add the chicken broth and bring to a boil. Pour the mushrooms and stuffing mix into the dutch oven with the vegetables.

Whisk the egg and then stir it into the stuffing along with the parsley.

Transfer the stuffing to a buttered casserole dish. You can either cover and bake later, or you can bake immediately. Bake at 350 degrees for 1 hour, keeping the stuffing covered for the first 30 minutes.

Want to save this Butternut Squash and Kale Stuffing recipe for later? Here is an image for you to pin: 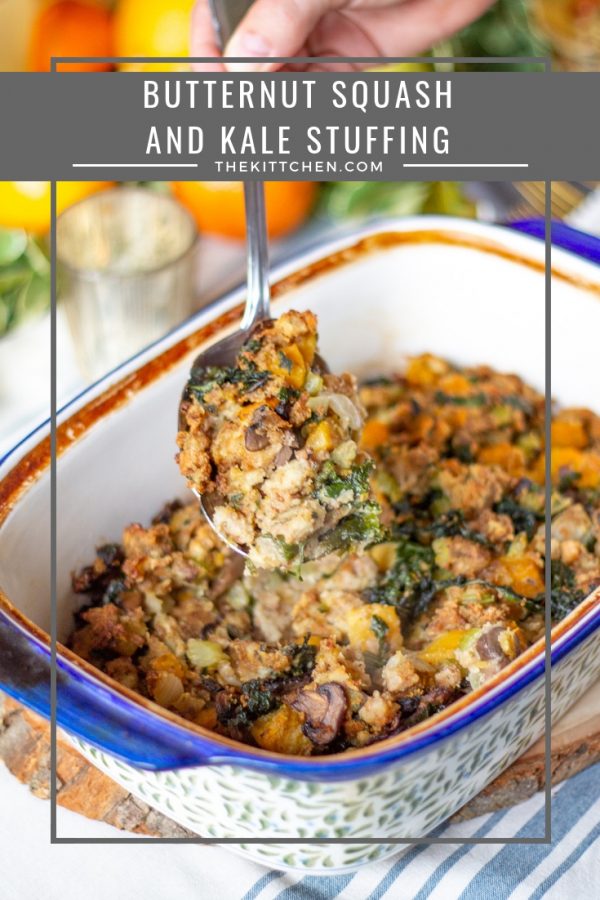