This Chorizo Sage Stuffing recipe is the BEST Thanksgiving stuffing recipe. Your family will be going back for more of this delicious homemade stuffing with chorizo, sage, fresh apples, and mushrooms. 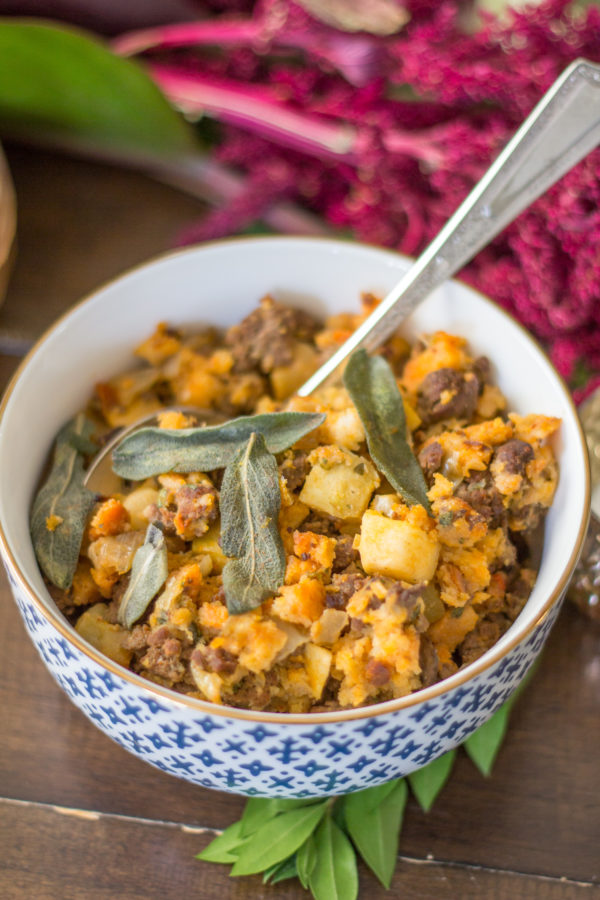 Stuffing is a Thanksgiving essential. When I was working on my series of Thanksgiving recipes, I called my sister to go over the plan and she pointed out that I had forgotten stuffing. This was not ok with her. Kelly told me to make Chorizo Sage Stuffing, I went along with the idea, and Charles was thrilled how the stuffing turned out declaring it to be the best Thanksgiving stuffing. 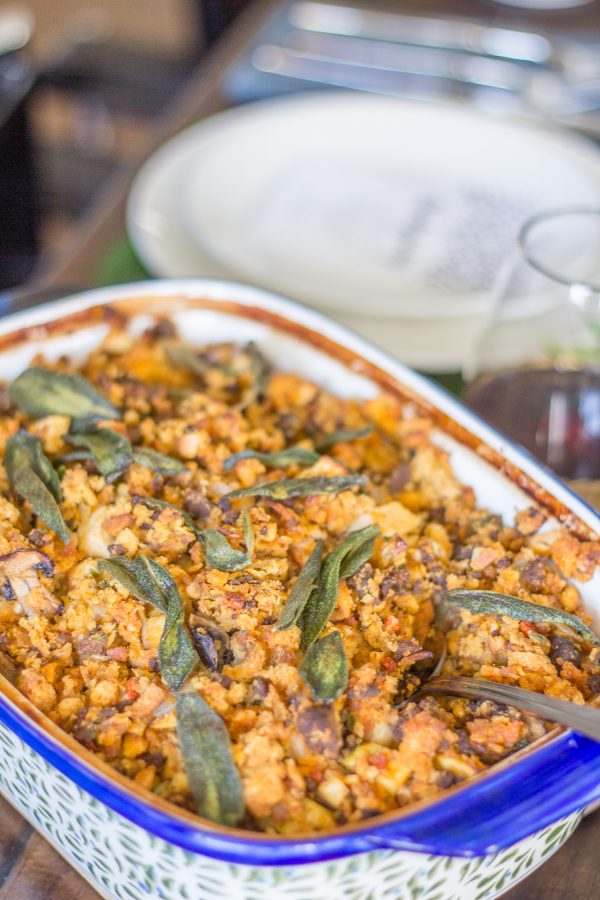 This recipe is very loosely based on the stuffing recipe that my parents have used for decades. My parents insist on using toasted challah bread instead of store-bought stuffing mix, but I cut corners and embraced the simplicity of a mix. Stovetop makes a sage stuffing mix which serves as a nice base for this recipe. The active preparation time for this recipe is just about 20 minutes, and it needs to bake for 40 minutes.

The chorizo gave the stuffing a little kick of spice, and I love the sage flavor. I used two boxes of stuffing mix, so this recipe makes a lot of stuffing, but most people love stuffing so I don’t think that is a problem. 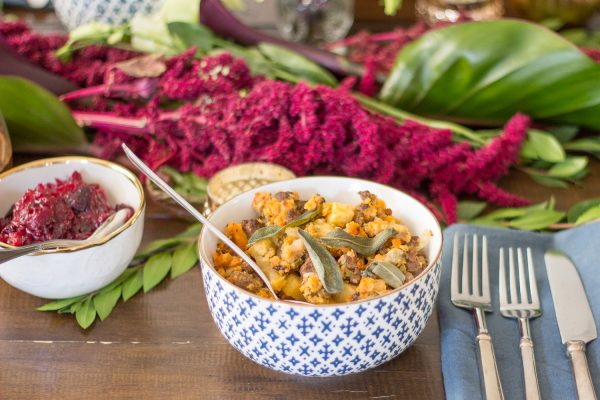 I know that some people LOVE stuffing. It has never been my favorite. I have always preferred mashed potatoes. I will say that this stuffing was pretty delicious. Charles kept going back for more of this stuffing and was excited when we had leftovers. 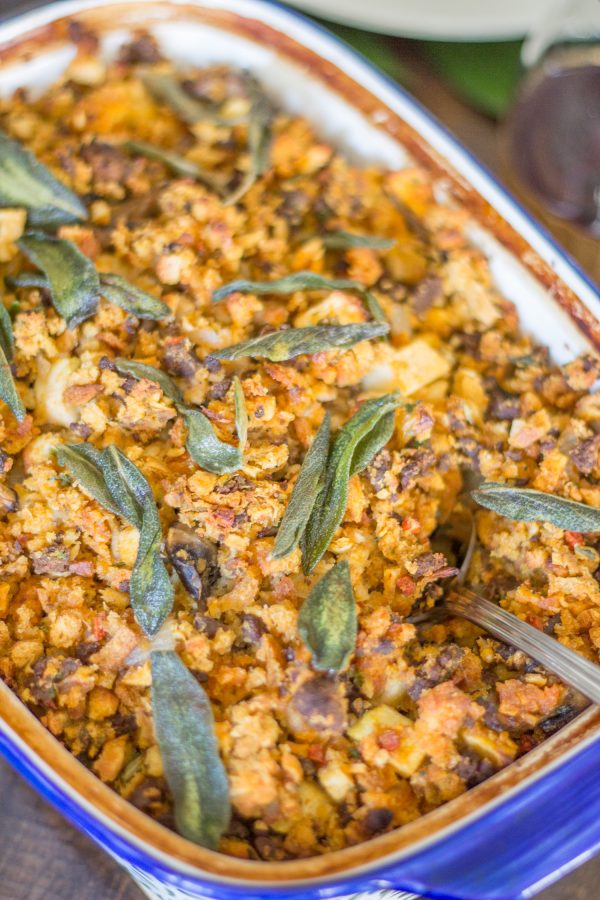 I was able to find ground chorizo meat at the grocery store. You could also use chorizo that has been removed from the sausage casings and crumbled up. If you aren’t a fan of chorizo, you can use sausage instead. 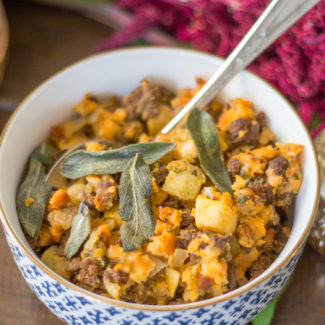 This Chorizo Sage Stuffing recipe is the BEST Thanksgiving stuffing recipe. Your family will be going back for more of this delicious homemade stuffing with chorizo, sage, fresh apples, and mushrooms.

Want to save this Thanksgiving stuffing recipe for later? Here is an image to save on Pinterest: 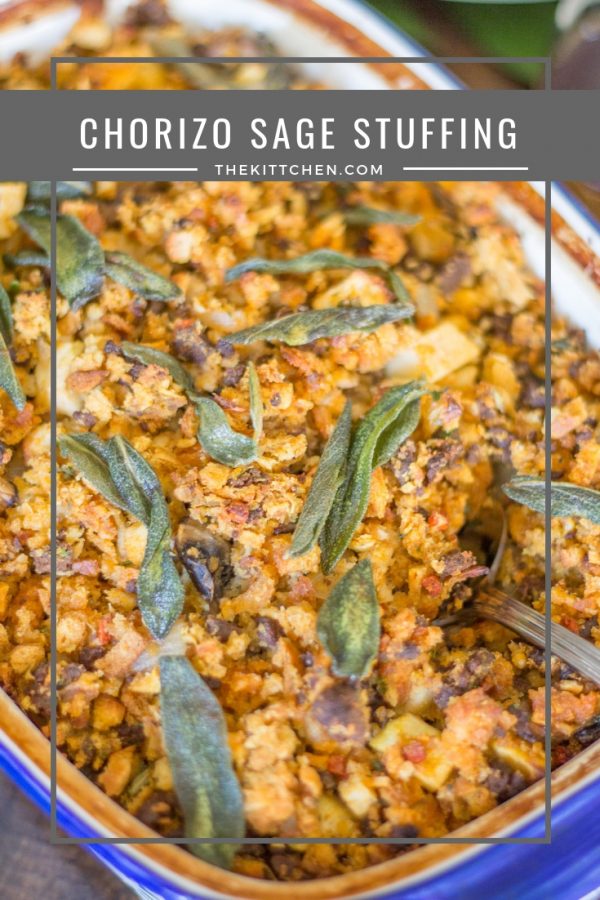 Your Thanksgiving Stuffing Recipe looks delicious, I will be pinning this recipe. Thanks so much for sharing with us at Full Plate Thursday this week. Hope you are having a great week and come back to see us real soon! Miz Helen

So glad that you like it and thanks so much for pinning!

What a lovely combination! Thanks for sharing at Fiesta Friday party!

Thanks! I love the sage/chorizo combo!

This recipe sounds absolutely amazing - I'm going to make it one of my choice features at Happiness Is Homemade Link Party starting on Sunday, congrats!!!!! :)