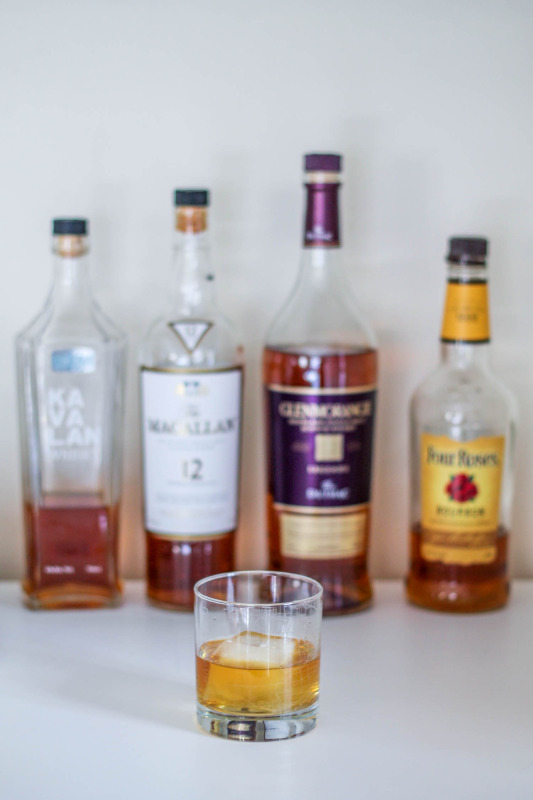 I have an easy solution to the question of what to buy a man for Valentine’s Day: Whisky. My guy friends love whisky, and it is available at a wide variety of price points. I teamed up with my whisky loving husband, Charles, to create a simple guide to buying whisky for your significant other for Valentine’s Day.

According to the internet, the difference between whiskey and whisky is a bit complicated, but generally whiskey is made in Ireland or the US, while whisky is made in Canada, Scotland, and Japan. Bourbon is made in the United States. If you want to know more about all the differences between types of whiskeys, head over here to read more (I am no expert!). Now on to Charles’s suggestions – he genuinely loves whiskey and I hope you find his recommendations to be helpful – of course feel free to leave your own recommendations in the comments.

If you know your significant other loves whiskey, but don’t know their preferences, get Macallan 12. It’s a straightforward whiskey that will please the palate of any whiskey fan. It’s $52.99 for a 750ml bottle.

If they love peaty whisky, Laphroaig 10 year is a relatively inexpensive option. A 750ml bottle is $59.99.

If you want to pick something trendy and highly respected, Kavalan Whisky is made in Taiwan and it is considered the best single malt whisky on earth. A 750ml bottle is $79.99, but Charles insists that it tastes like it is more expensive. 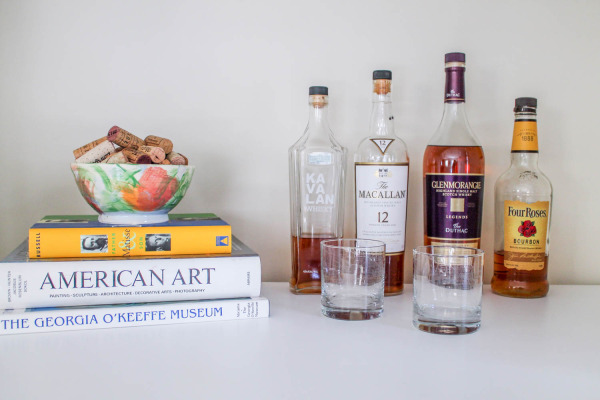 For whiskey with citrus notes, pick Glenmorangie Nectar D’Or Sauternes Cask. Charles says it is one of his all time favorites. A 750ml bottles is $69.99. (Note: Charles has informed me that I took a photo of the wrong Glenmorangie bottle, get the Nectar D’Or and not the one pictured here).

If you are on a budget, Johnnie Walker Black Label is a good, inexpensive, easy to drink whiskey. A 750ml bottle is $29.99. Another, even less expensive option is Four Roses which is $19.99 for a 750ml bottle.

Now that I have talked about whisky, let’s talk about Charles’s favorite whiskey drinking accessories. He loves giant ice cubes made with one of these ice cube trays, these glasses with Chicago’s latitude and longitude on them (other cities are available too), and whisky stones.

*I gathered the price information from Binnys.com to give you a point of reference.
Random sidenote, I made the bowl in the photo when I was in high school – I almost majored in ceramics until my friends gave me an intervention and told me that my only career option would have been to become Amish.

Well, this is helpful as a non-whisky (whiskey) drinker with a whisky drinker for a partner! Thanks for the guide

My husband is the whiskey drinker and I'm the win-o! I'll investigate your picks for his sake -- he's my boo, after all!

Thanks for sharing some suggestions! I tried Buffalo Trace (an American bourbon) for the first time around Christmas and was pleasantly surprised! It's made by the same folks who produce Pappy Van Winkle, which is an expensive & highly-coveted Kentucky straight bourbon whiskey, but at a much lower price point.

This is a useful guide for people like me, who know nuts about selecting my alcoholic drinks. Thanks for the share :)