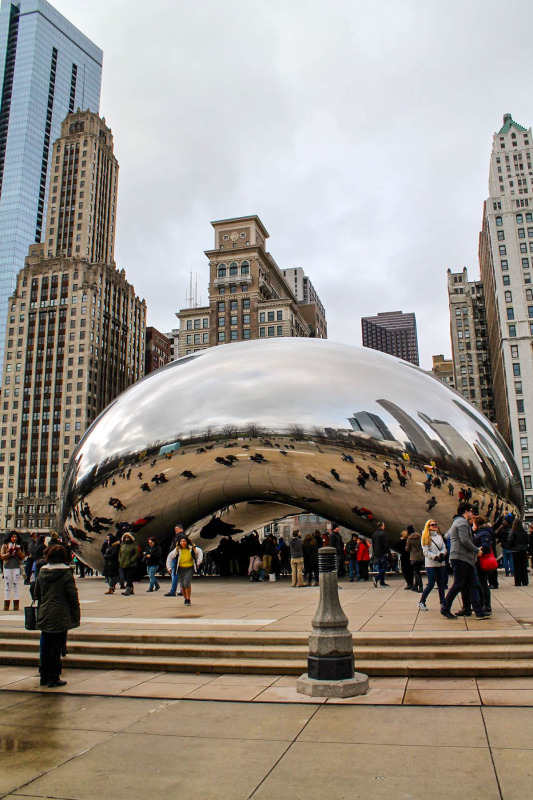 Pack your bags! We are heading out on two Chicago staycations. At first I thought that the idea of a staycation was silly. Why pay money to stay in a city you live in? I wasn’t quite sold on the idea of a staycation, but I booked a room for us at the Soho House on New Years Eve, and I quickly changed my mind. Since then we have ventured out on another staycation, in a very different part of the city. I am going to tell you all about the hotels and what we did while we were there. Let’s go! 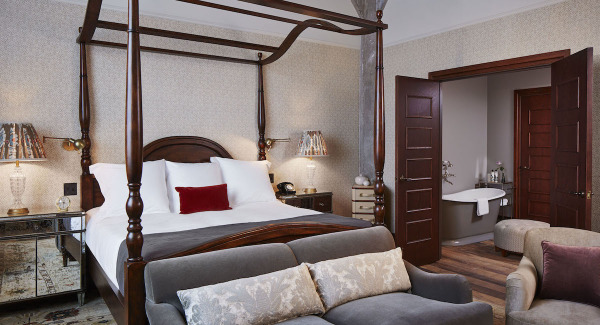 I think all of my stress melted away the moment I walked into our room. Soho’s aesthetic is mod/vintage with an exacting attention to detail. We booked a Medium sized room (a Big bedroom is pictured above). 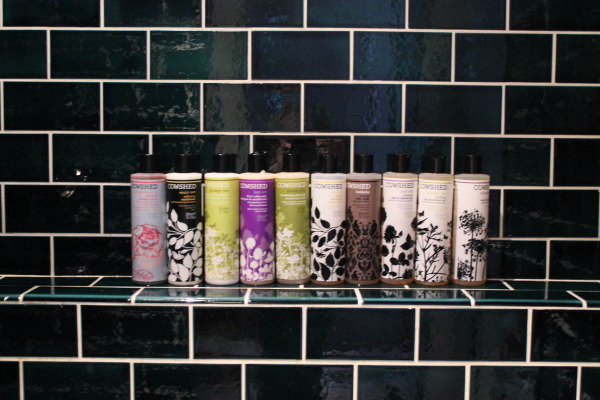 I couldn’t get over how well stocked the room was. They had an entire lineup of CowShed bath products, toothbrushes, a nespresso machine, champagne goblets, a fully stocked bar, and even a hair straightener ready for us. 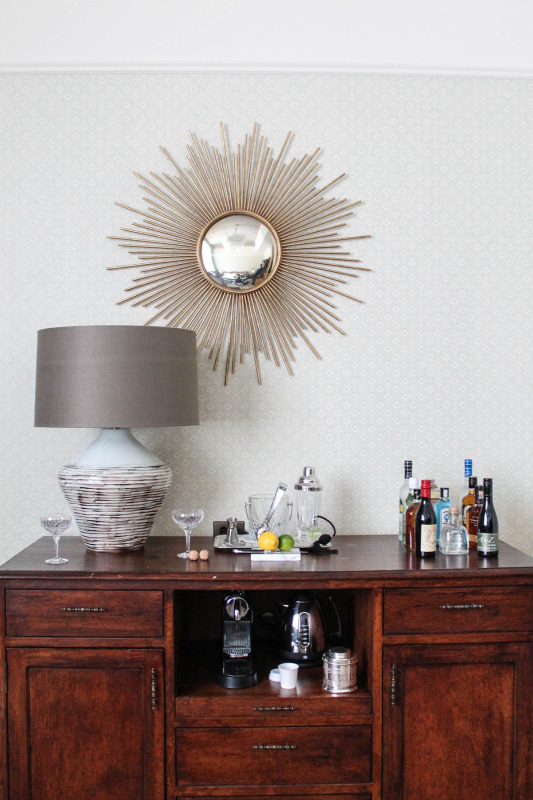 Soho House offers “One While Changing”; every night a bartender with a drink cart goes from room to room mixing up cocktails while people are getting ready for the evening. This is hospitality at its finest – but unfortunately we were eating dinner when the cart stopped at our room. 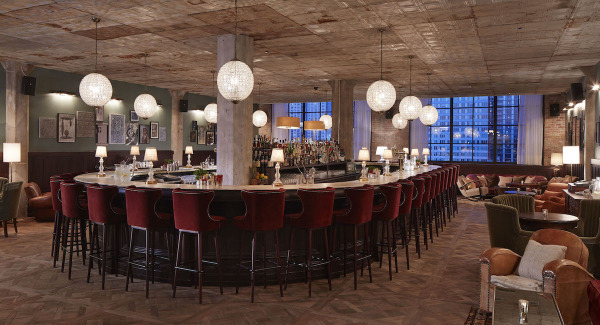 What we did: Soho House puts you right in the middle of Chicago’s most bustling culinary destination. We grabbed a pizza at Parlor, went to Chi-Town Rising, and ended the night with cocktails at the stunning bar on the 5th floor. 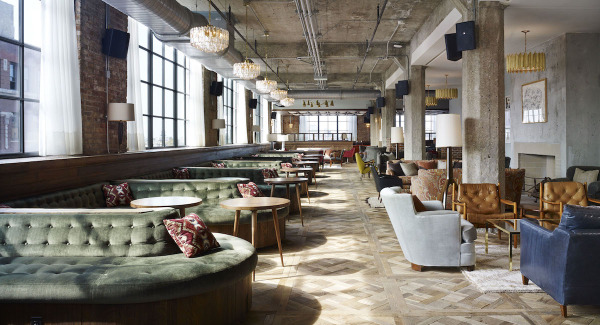 The other side of the 5th floor has lounge seating and wood burning fireplaces, sometimes I hang out there eating warm, fresh out of the oven, chocolate chip cookies and drinking red wine. 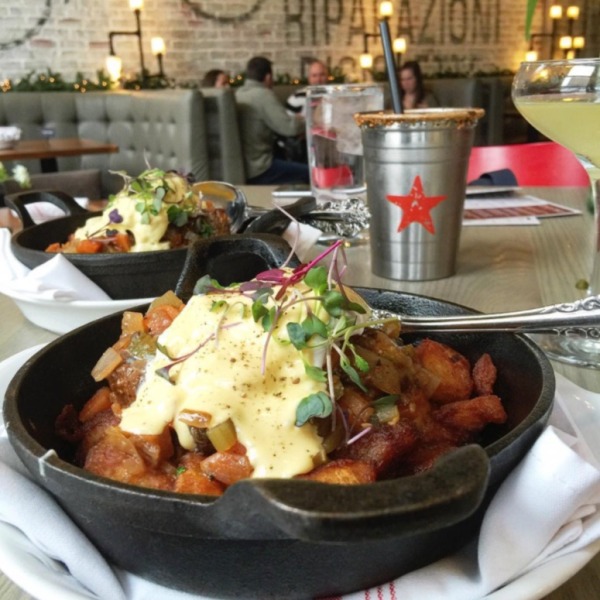 The next morning we brunched at Bar Siena. It was a perfect little 24 hours in the West Loop.

Other things to do within walking distance: See a show at City Winery, sip champagne at RM Champagne, or dine at Green Street Smoked Meats, High Five Ramen, Girl and the Goat, or Little Goat. 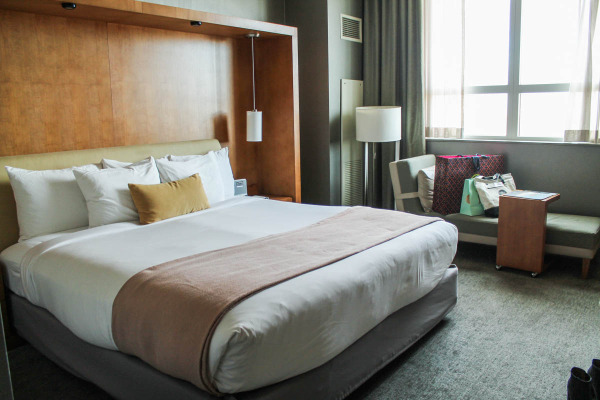 Rosemont is technically a separate town, even though it is only 2.5 miles big, and beside Chicago and just 20 minutes from downtown. When the Loews Hotel invited us for a visit we didn’t know what to expect, but at the end of the night Charles and I were so glad we went – there is so much to do in Rosemont!

We stayed at the Loews Chicago O’Hare, which despite its location near the airport, is a tranquil and welcoming hotel with a sophisticated restaurant (The Ashburn) on the first level. We checked in and then went out to explore Rosemont. 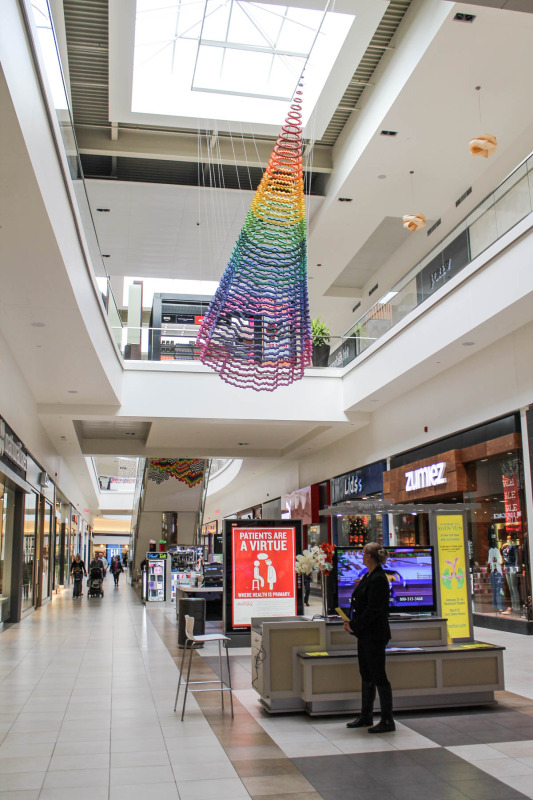 What we did: First I went to the Fashion Outlets of Chicago, an upscale outlet mall where I scored a great deal on Tory Burch boots. The upscale indoor outlet mall has stores like Saks Fifth Avenue Off 5th, Neiman Marcus Last Call, Michael Kors, Gucci, Prada, lululemon athletica, J.Crew, L.K. Bennett London, Coach, DVF, and Cole Haan plus an entire section for kids clothing. 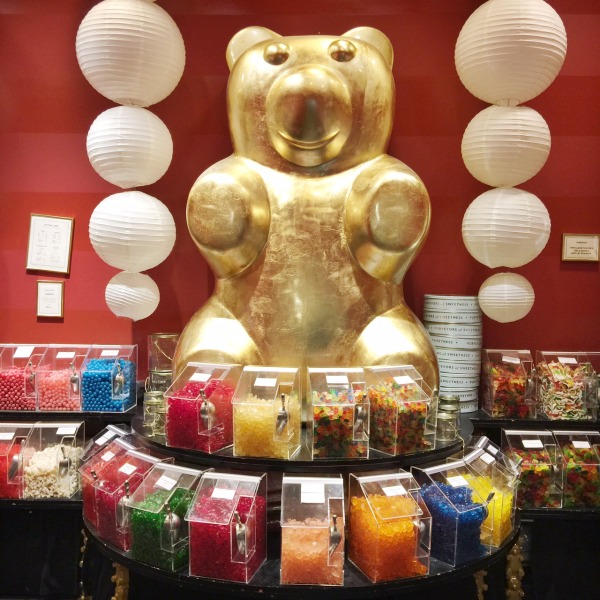 The Fashion Outlets of Chicago is home to the most gorgeous candy shop. It’s called Lolli and Pops and they have an entire room devoted to gummy bears. There are rooms for Harry Potter and chocolate too! I might have spent $40 on candy… and Charles might have eaten almost all of it without sharing. 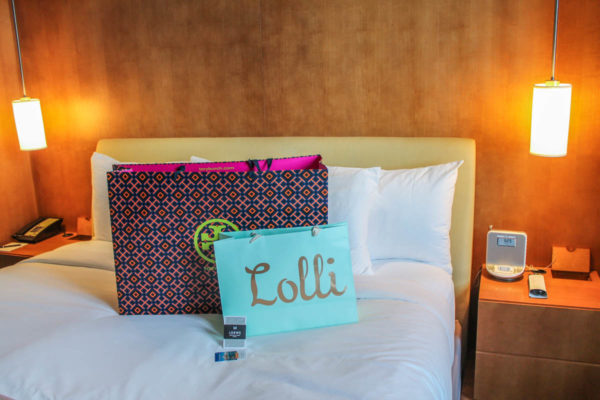 After shopping, I went back to Loews to drop off my things and get ready for the evening. We grabbed cocktails at The Ashburn and then went to MB Financial Park, a huge entertainment and dining center, a short distance from the hotel. 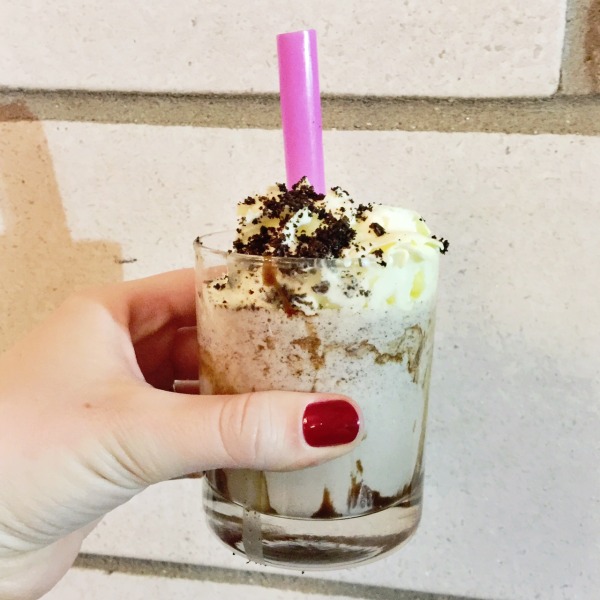 MB Financial Park is a small walkable area with almost any activity you could imagine. You can bowl at Kings, satisfy your sweet tooth at Sugar Factory, catch a comedy show at Zanies, see live music at Joe’s or Five Roses, see a movie at Muvico, drink beer at Hofbraushaus – an authentic German beer hall, or dine at Bub City, Park Tavern, Fogo de Chao, or Adobe Gila’s. The milkshakes at Sugar Factory were definitely a highlight of our tour through the park. 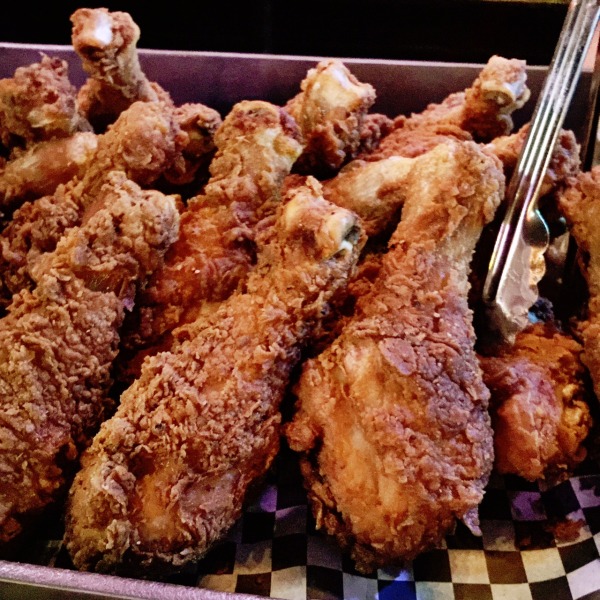 The new Bub City / Joe’s just opened up on Thursday and it’s a game changer. The massive space is split between the two concepts. Joe’s is hosting country music concerts while Bub City is cooking up the Nashville BBQ they are known for. Both Bub City’s fried chicken and mac and cheese are incredible, and what could be more fun than dinner and a concert? 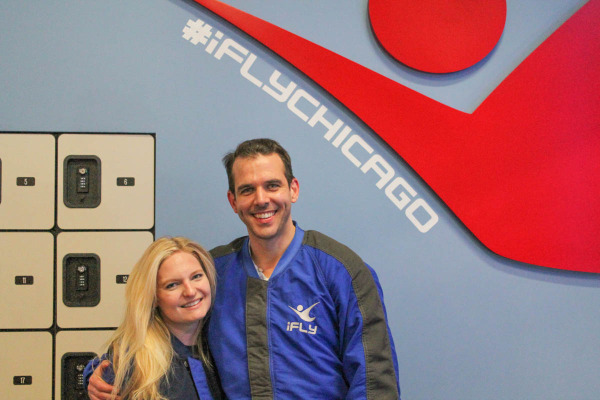 After touring MB Financial Park, we ended our evening with indoor skydiving at iFly. The sensation of indoor skydiving is hard to describe, basically hundred mile an hour winds are pushing you up, while you try to balance and float in the air. It’s a much safer and easier alternative to skydiving, and it would be a blast to go with a group. 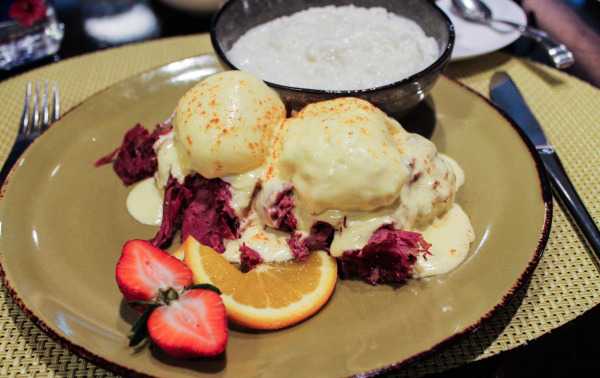 The next morning we had brunch at The Ashburn before heading back home. The thing about The Ashburn is that it doesn’t feel like it is in a hotel (just like Rural Society at the Loews in downtown Chicago is a restaurant and not a hotel restaurant).

The fun thing about Rosemont is that since we had never been there before, it really felt like we were on a vacation. We loved exploring the town and we couldn’t believe how bustling with activity Rosemont is. It’s the perfect place to escape for a night, have dinner, enjoy a concert, go indoor skydiving, relax at Loews Chicago, brunch at The Ashburn, and score some deals at the Fashion Outlets. And it’s all right next to each other.

How to get to Rosemont: Take the Blue Line to Rosemont, and then hop on Pace’s Rosemont Entertainment Circular shuttle to MB Financial Park. The shuttle comes every 7-8 minutes and it is free. Rosemont is only 5 minutes from O’Hare, so it’s the perfect place to spend the night before an early flight.

Have you been on any staycations? Tell me about your experience in the comments!

Fun! My best friend and I are trying to figure out a fancy staycation weekend later this spring. We're thinking little opera and high tea.