A guide of what to do in Sarajevo… 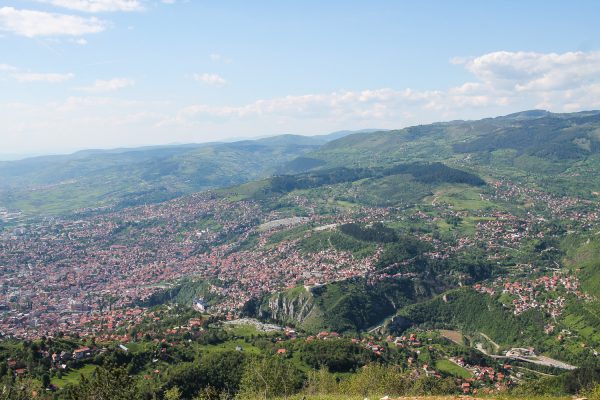 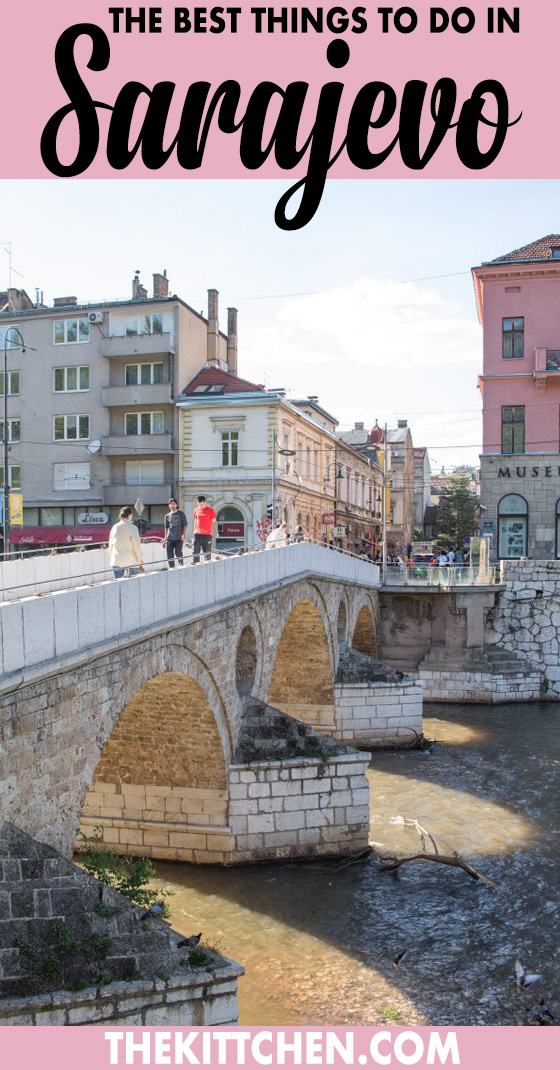 Sarajevo is a vibrant city that bridges Eastern and Western culture. It is small enough to see in two days, and its location makes it a logical stop between Belgrade and Dubrovnik. After a press trip to Serbia, I planned to meet Charles in Dubrovnik, and with three extra days on my hands, it only made sense to stop in Bosnia. I have never heard anyone talking about vacationing in Bosnia, so I didn’t know what to expect. I was left thinking that I have found an incredibly affordable travel destination that is an easy jumping off point for a trip to Serbia or Croatia.

Historically, Sarajevo was a part of the Ottoman Empire and later part of Austria-Hungary and the architecture tells the story of the cities with ties to both the east and west. Mosques, synagogues, Christian Orthodox Churches, and Catholic Cathedrals can be found just a block apart. The religions have peacefully coexisted. Locals emphasized war was a political conflict not a religious conflict – the cliff notes of a very complicated political situation is that the Serbs living in Bosnia wanted Bosnia to be a part of Serbia after the breakup of Yugoslavia, meanwhile the Croats wanted to become part of Croatia, and the Bosniaks wanted to become an independent nation. (Please politely correct me in the comments if this isn’t totally correct, I did my best to understand based on some reading and discussions with locals). 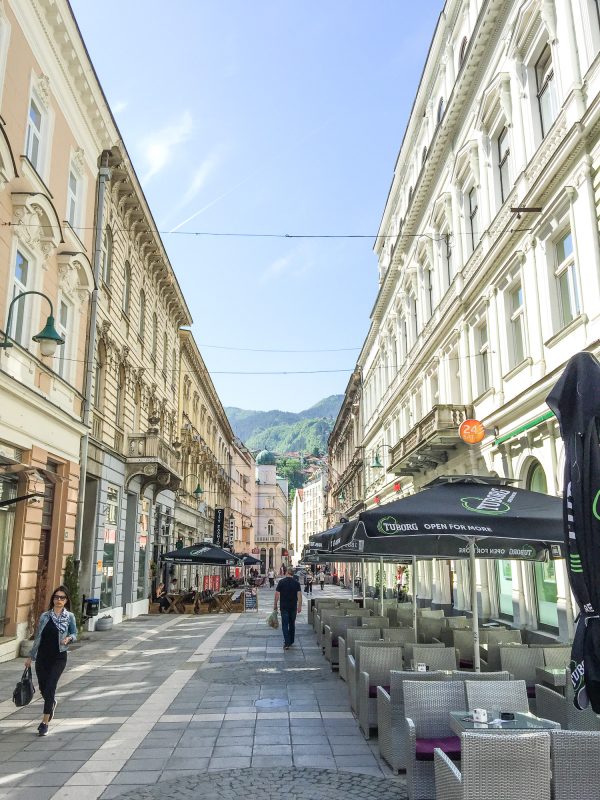 Sarajevo is a picturesque city nestled in a valley surrounded by lush green hills and mountains. Today the city is so clean and so well kept that it can be hard to imagine that the city was at war just 20 years ago.

What to do in Sarajevo: 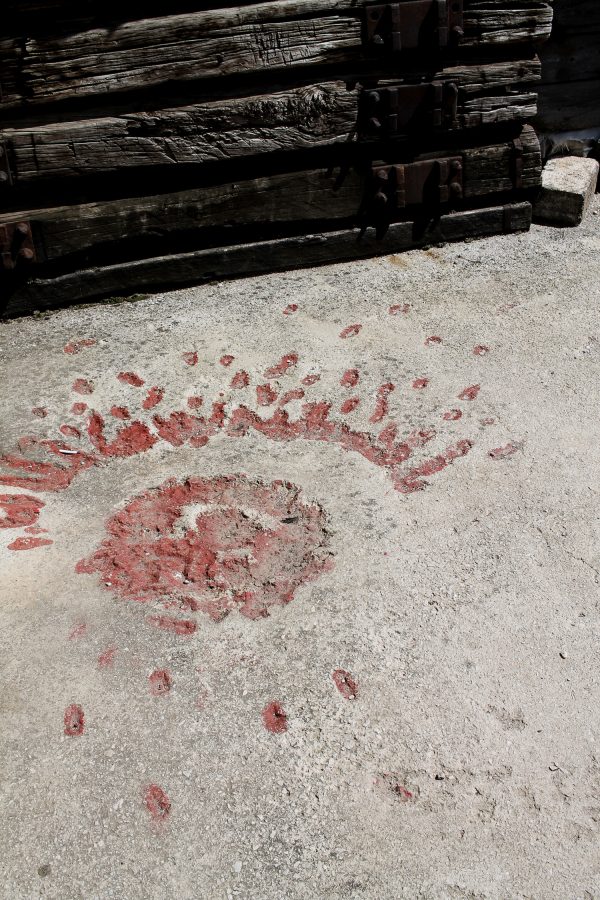 From April 1992 until February 1996, Sarajevo was under siege. The city was surrounded by an army of Bosnian Serbs cutting off gas, electricity, and access to food and water. The city has made a dramatic rebound after the war, buildings have been repaired and “Sarajevo roses” marks on the street where bomb damage has been painted red are some of the only visual reminders of the conflict. 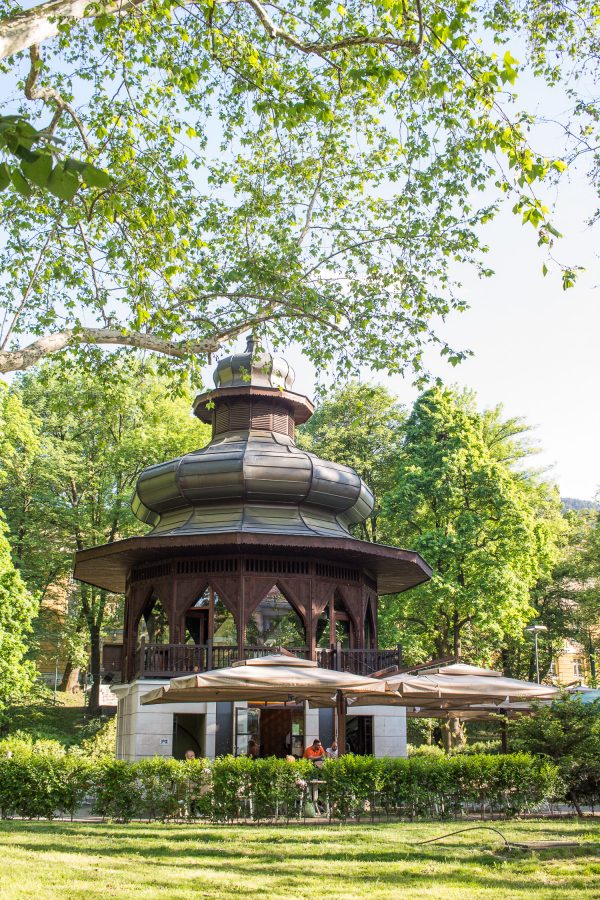 To learn more about the conflict, I visited Galerija 11/07/95, a photography exhibit in downtown Sarajevo that tells the history of the Srebrenica tragedy. Through photos and video, the story of the genocide that killed over 8,000 people (mostly men and boys) during the war in Bosnia is told. It was utterly heartbreaking, but it gave me insight into what it was like living in Bosnia during the war. I thought it was important to spend a bit of my time in Sarajevo learning about the war. 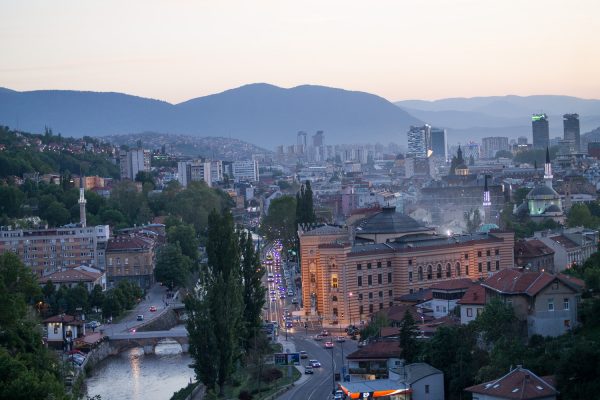 One thing that I like to do when I am visiting a new city is to find a free walking tour. The guides who run the free tours work for tips, and in my experience, that is an indication that they put a considerable amount of effort into their tours. Plus, a tour guide is able to give a local’s perspective on the city, and they are an invaluable source of restaurant and nightlife recommendations. 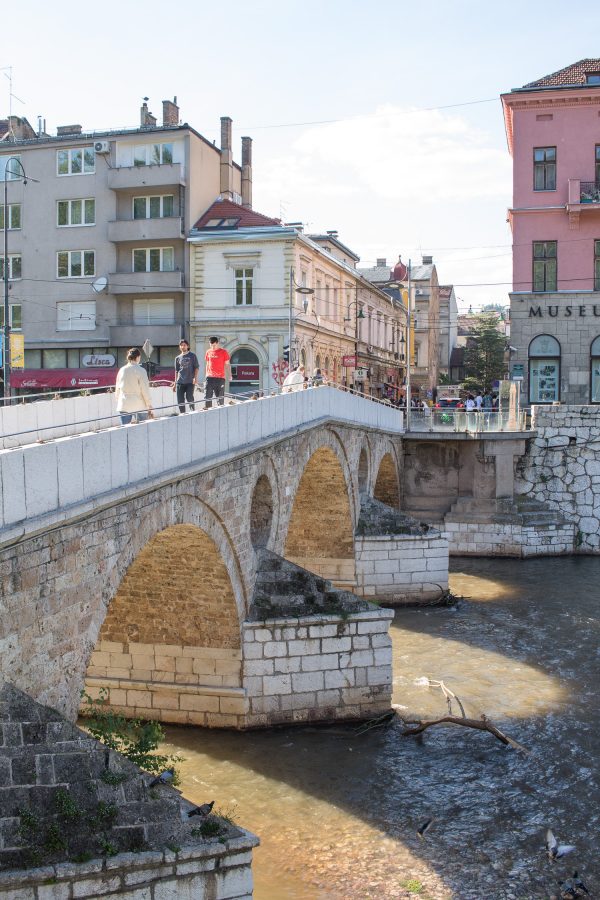 My tour guide, Enes, is only a few years younger than me and he grew up in war-torn Sarajevo. He said that people lived in fear of snipers who would shoot at anyone, including children. Enes’s mother would never dress him in red because it would make him easy for the snipers to find. Once a sniper tried to shoot him, missed, and got his cousin in the leg. Food was scarce during these times and families relied on supplies from the UN, and Enes would eat leftover rations from the Vietnam War, which came with hot sauce so you could mask the awful taste. Despite all that Enes had been through, he is the happiest guy with a positive outlook on life, and he was excited to show me around Sarajevo. 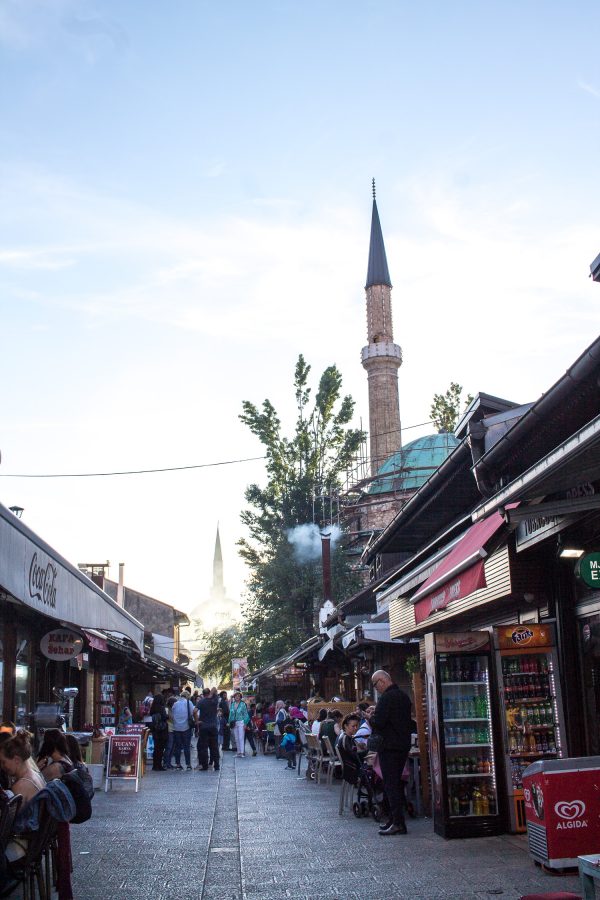 Our tour began at Jesus’s Sacred Heart Cathedral. This is where the Austria-Hungarian section of Sarajevo starts. There is an actual clear line dividing the Ottoman section of the city (shown in the photo above) and the more modern Austria-Hungarian area. And beyond that, there is a new modern city with skyscrapers and large office buildings. East and West, old and new coexist in Sarajevo. 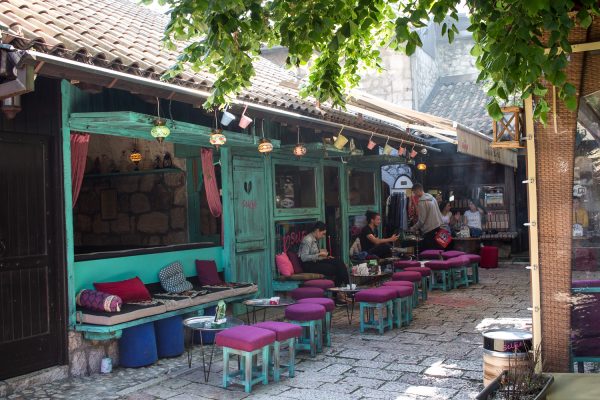 We spent about 2 hours walking through the city stopping at landmarks ranging from the spot where Franz Ferdinand was assassinated to Roman ruins, and mosques. It was a nice quick overview of the city, and I liked getting a local’s perspective on Sarajevo. 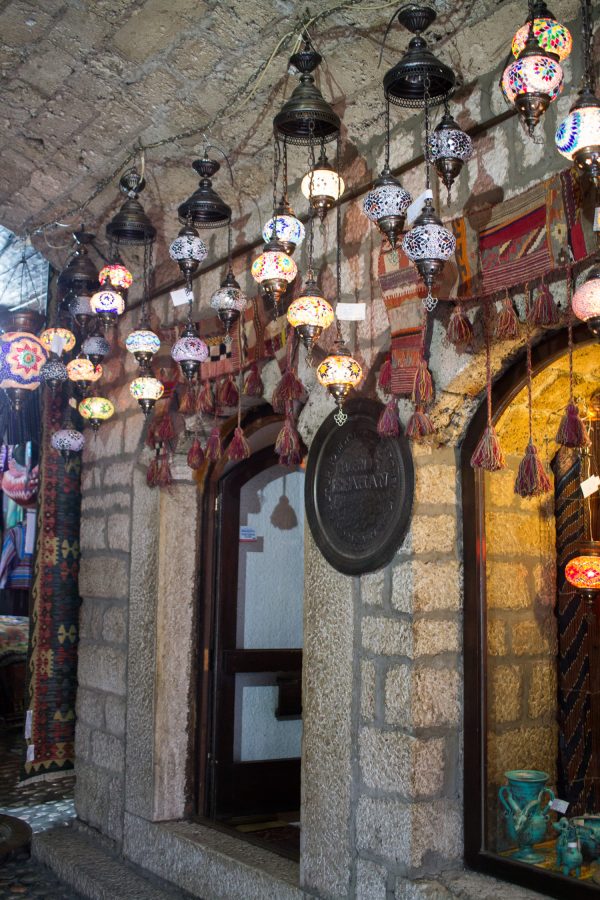 When our tour ended, I asked about tours to see the sites that you need to drive to. Enes very kindly arranged for the tour of the Tunnel of Hope and the bobsled tracks to pick me up at my hotel, store my bags in the van, and then drop me off at the bus station when the tour had ended. It was super convenient and it made it possible for me see all of the sights I wanted to. 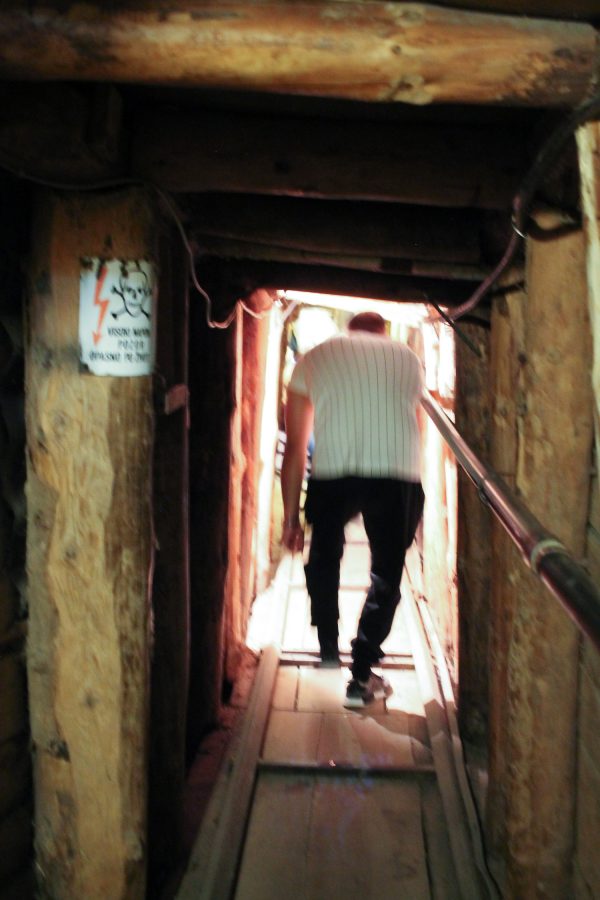 I took the Sarajevo Under Siege Tour with BH Spirit Tours and it links together several sites that were significant during the war in a 3 ½ hour tour. First, we visited the Tunnel of Hope, an 800-meter long tunnel that was used to transport supplies and people during the war. The Serbs had surrounded Sarajevo, and the tunnel was an essential means of bringing food into Sarajevo so people would not starve to death. Some people used the tunnel to escape Sarajevo. It was also used to transport medical supplies. 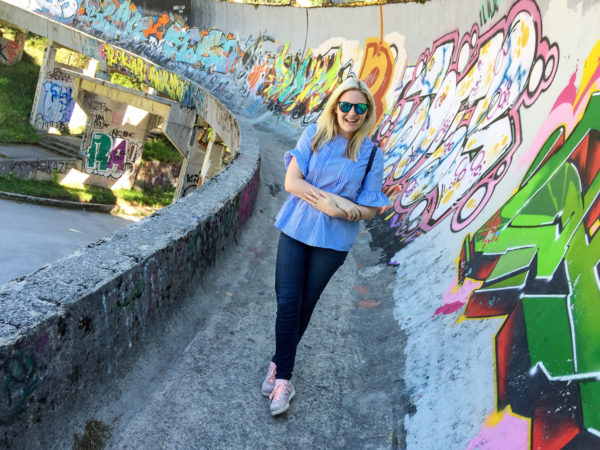 Another highlight of the tour was going to see the abandoned bobsled track from the 1984 Olympics. It’s hard to imagine how a city went from hosting the Olympic games to being under siege in under 10 years. 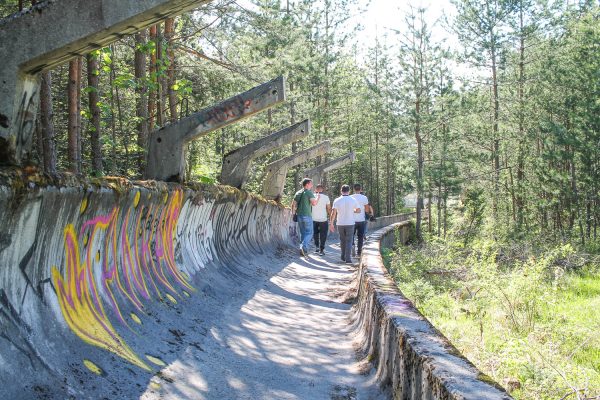 The bobsled track was abandoned during the war, and today it is considered one of the most beautiful abandoned places in the world. 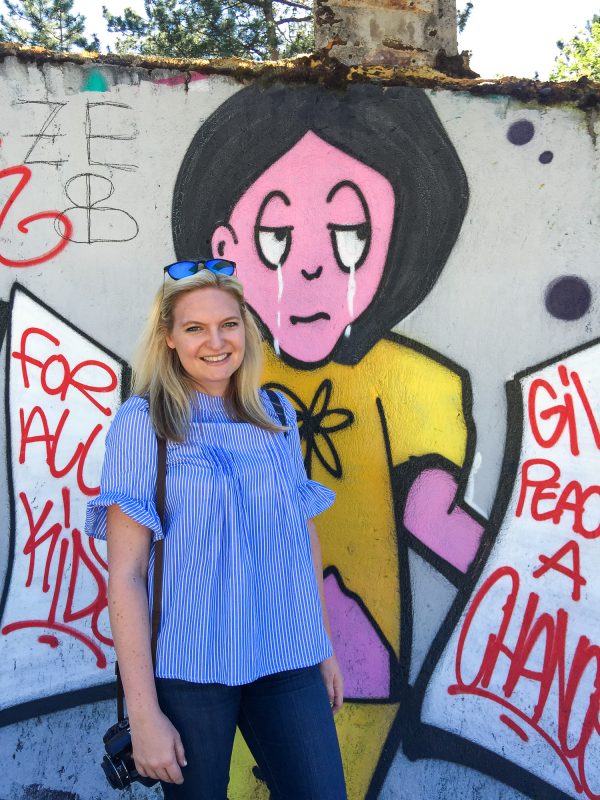 What to know before you go

One struggle of planning my trip to Bosnia was that there isn’t much information about bus and train schedules available online. The train often shuts down for long periods of maintenance, and some of the bus schedules not online or are not available in English. While bus and train schedules can be hard to find in English, nearly everyone, including taxi drivers, speaks English and they are happy to help you. I was traveling by myself on my way to meet up with my husband in Croatia, and I never felt unsafe. 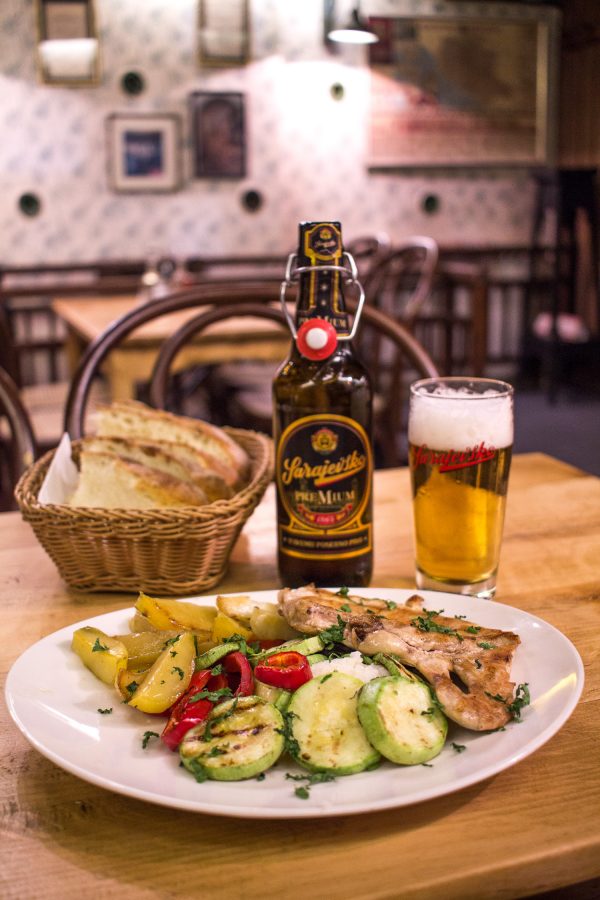 Where to eat in Sarajevo

The House of Spite

Bosnian food is similar to Serbian food. There is an emphasis on simple hearty food like meats, cheeses, and vegetables. The cheeses and the cheese and spinach pies are very similar (and delicious!) in Bosnia and Serbia. One night I had dinner at The House of Spite. This restaurant beside the river used to be a home. After Bosnia left the Austrian-Hungarian Empire, the Bosnians began to build their own government buildings. Government leaders want to build City Hall on the spot where the House of Spite was built, but the owner would only give the city the land if they gave him a bag of gold and moved the house brick by brick across the river. In 1895 the house was moved and locals began calling it the House of Spite. In 1997 it became a restaurant. The interior still feels like a home, and they serve traditional Bosnian food. 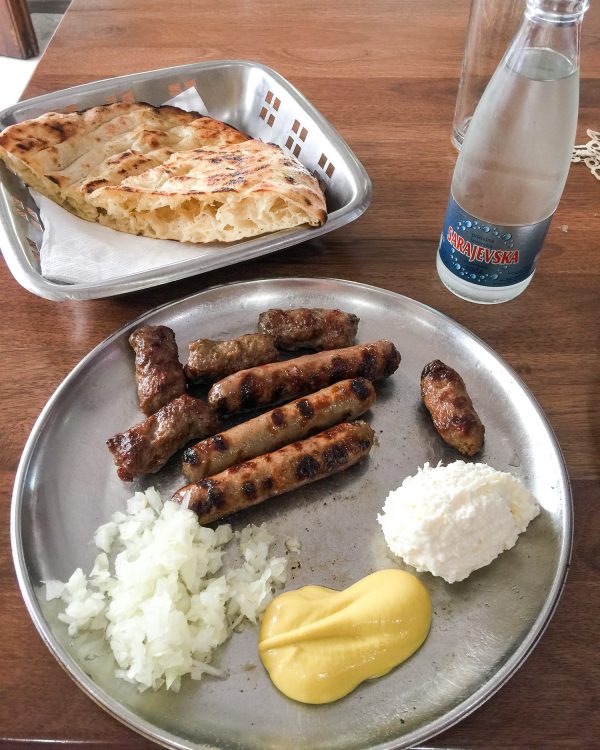 The best meal I had in Sarajevo was at Ferhatovic Petica, a small restaurant in old town just directly across the street from my hotel. Both Enes and the staff at my hotel recommended the restaurant saying it’s the place to get sausage. Enes gave me specific instructions to older a mix of cevapi (beef sausages that are rolled by hand) and sausages (made with veal and meat) with a side of kajmak, a creamy goat cheese (also spelled kaymak). It came with a big chunk of warm doughy pita bread. It was such a good meal that I am certain that I won’t forget it. I don’t really love sausage. I wouldn’t have ordered it if Enes had not told me to, but it was fantastic. I am already planning to hunt down a grocery store in Chicago that sells the sausages. The lunch was only $5 – food is very affordable in Bosnia. 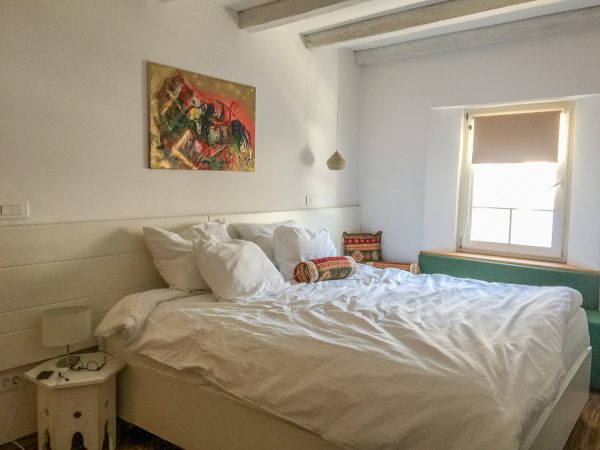 Where to stay in Sarajevo

I stayed at the Hotel Old Sarajevo, which is right in Sarajevo’s Old Town, an area filled with markets, restaurants, and historical sites. It cost just over $100 a night and it was an ideal place to stay. It wasn’t fancy, but the location was excellent, and staff was super helpful, and breakfast and WiFi were included.

After Sarajevo, I took a bus to Mostar. The journey took about 2 1/2 hours and it was one of the most beautiful drives I have experienced. If you go to Sarajevo, spend a night in Mostar too. I will tell you all about Mostar in my next travel post.

My tour guide, Enes Popara, works for BH Spirit Tours can his email address is excursions.sa@gmail.com. He was really great so I wanted to share his info.