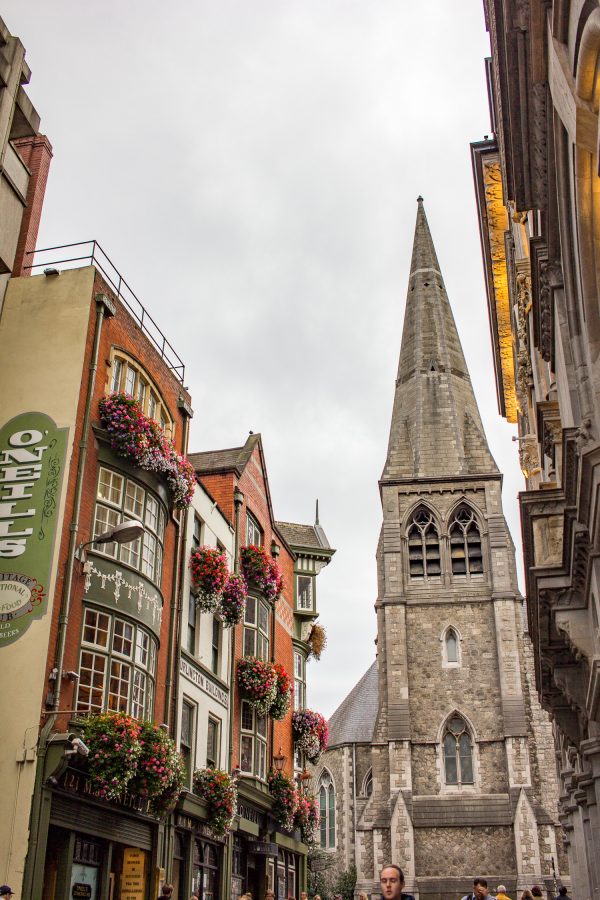 Dublin is one of my favorite European cities. I love its smaller size. It is walkable, and you aren’t overwhelmed with an impossible number of historical sites and museums to visit. I like to explore the city by day, and then settle into a pub at night to sip pints while I listen to live music. I would take that over a beach vacation any day. 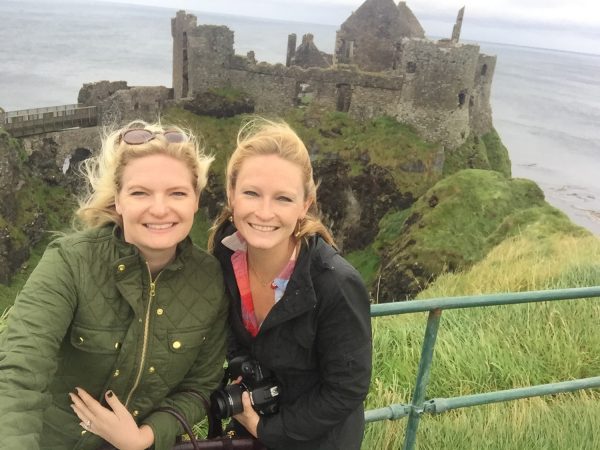 After two nights in the Irish countryside, Kelly and I made our way to Dublin. We drove up through Northern Ireland creating our own Game of Thrones tour which you can read about here. Upon arriving in Dublin, my sister and I checked into The Merrion, a five-star hotel that occupies the space of four understated brick homes. You could easily walk by and not realize that the buildings are home to a luxurious hotel. When we arrived paparazzi were stationed outside, apparently Duran Duran was also staying at the hotel. We checked into a very spacious and modern room with twin beds and a marble bath. We arrived later in the evening, so our first order of business was to head out for the night. Dublin is known for having live music at the pubs – it could be considered the Nashville of Europe… but with more charm and better accents. 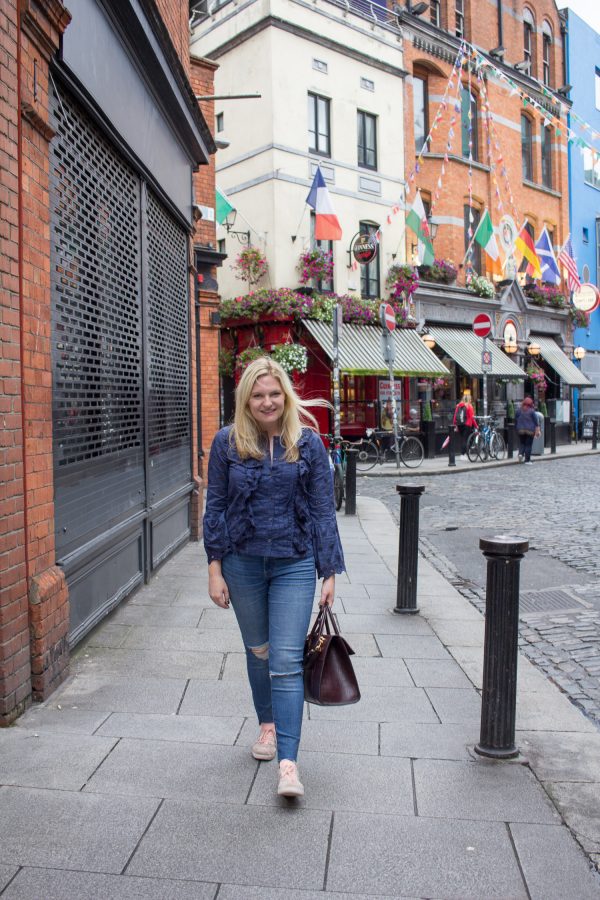 Temple Bar is the area known for nightlife in Dublin. It is a bit touristy, but the live music is so good that I don’t mind. A cab driver had told us to go to The Brazen Head, a pub on the edge of Temple Bar where a local band called Straight Out Of The Crate was playing. The pub’s claim to fame is that it is the oldest pub in Dublin – it opened in 1198! We were there on a Sunday night and the place was packed with locals who came to see the band, a group of older men who played a mix of traditional and modern Irish music. 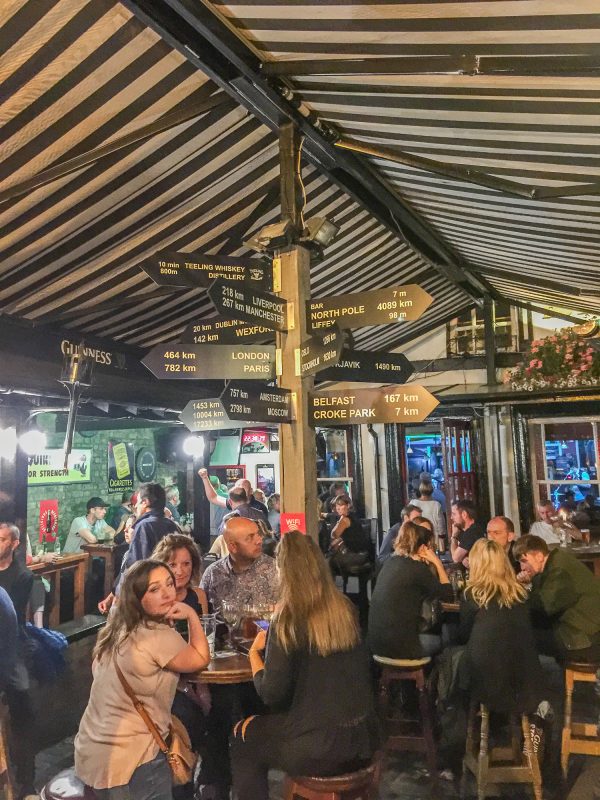 Kelly and I ordered beers and settled in to listen to the band. At one point two blonde sisters with backpacks and hiking boots walked through. They were probably about 15 years older than us, and we figured that they might have been future us… but they didn’t deliver a pressing message about the future, so perhaps we were wrong. 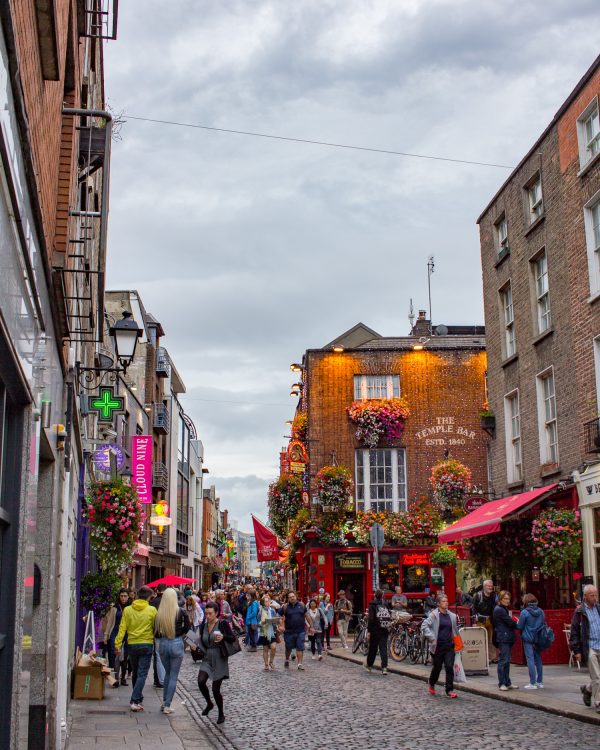 While we enjoyed The Brazen Head, we were a few decades younger than most people in the pub, so we headed towards the center of Temple Bar. We heard music from The Old Storefront and popped in for a couple of pints (or whiskey on the rocks if you are my sister). 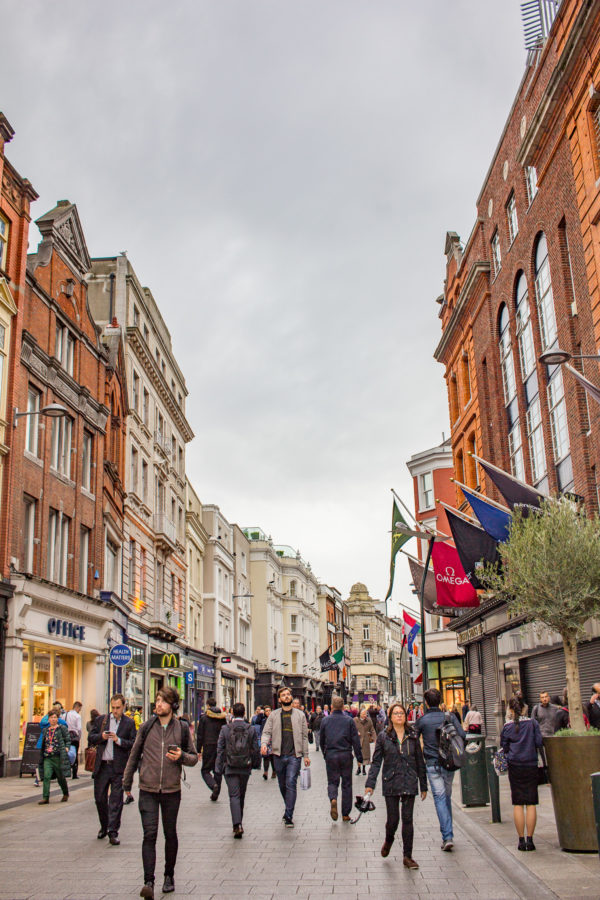 The next day we walked over to Grafton Street for a bit of shopping. Many of the stores are the same you will find in any major city. We did discover that there is a & Other Stories location on Grafton Street and couldn’t resist the chance to stock up on some fall essentials. 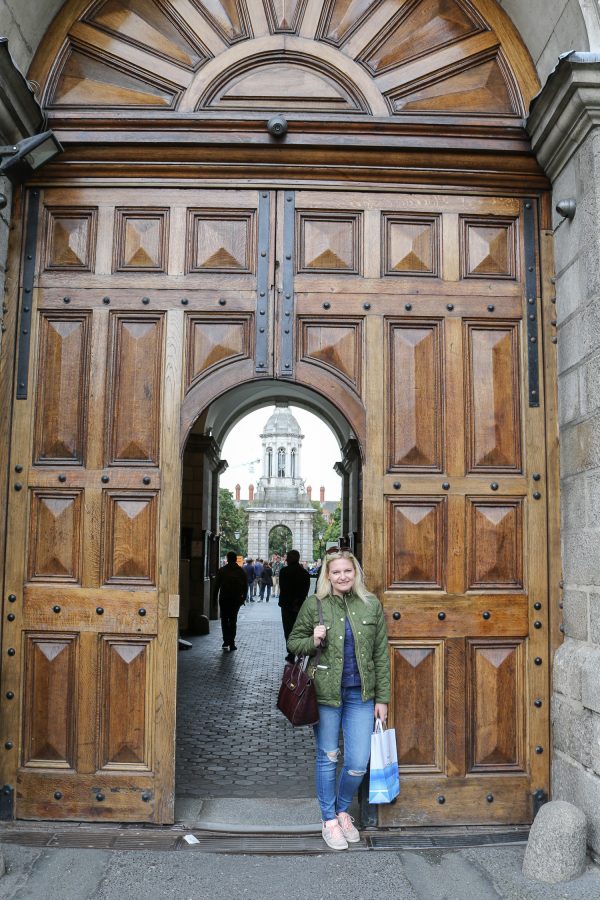 Next, we continued our walk over to Trinity College for a tour. We just happened to visit on the one day when a new movie about Virginia Woolf, Vita and Virginia, was being filmed, and part of the campus had been turned into a London Street. 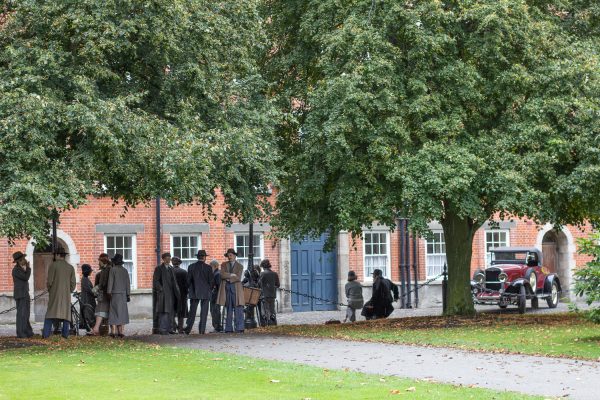 We couldn’t resist taking a couple photos while we waited for our tour to start. The campus tour includes tickets to see the Book of Kels at the library and costs only 1 euro more than the ticket to the library alone. We were slightly disappointed that we didn’t get to go into any of the buildings during the tour. 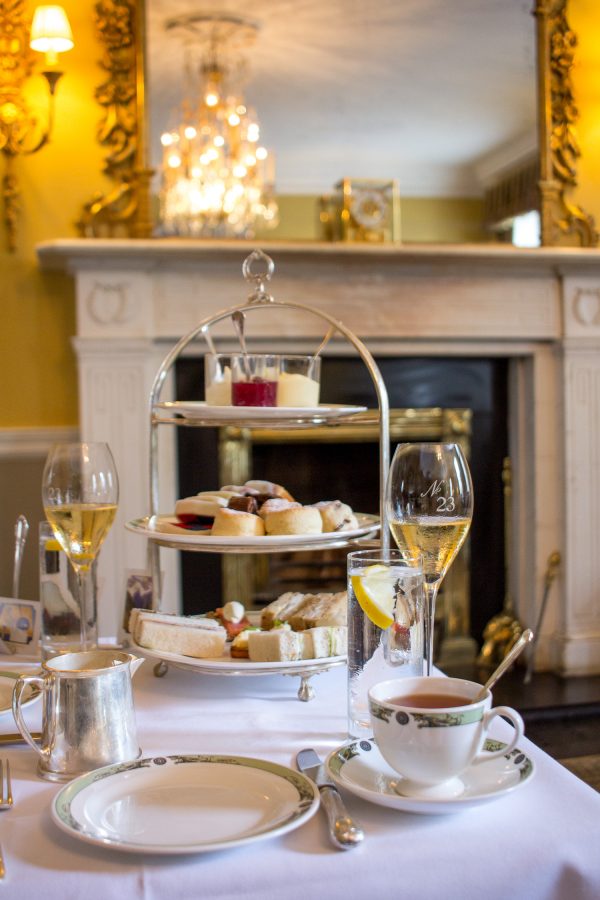 We had booked afternoon tea at our hotel and we were short on time so we left Trinity and decided to come back after tea to see the Book of Kells and the library. The tea at The Merrion was exceptional. The inspiration for the tea is the hotel’s extensive collection of Irish Art. The first course of the tea included the classic sandwiches, scones, and pastries. And we ordered some champagne too. 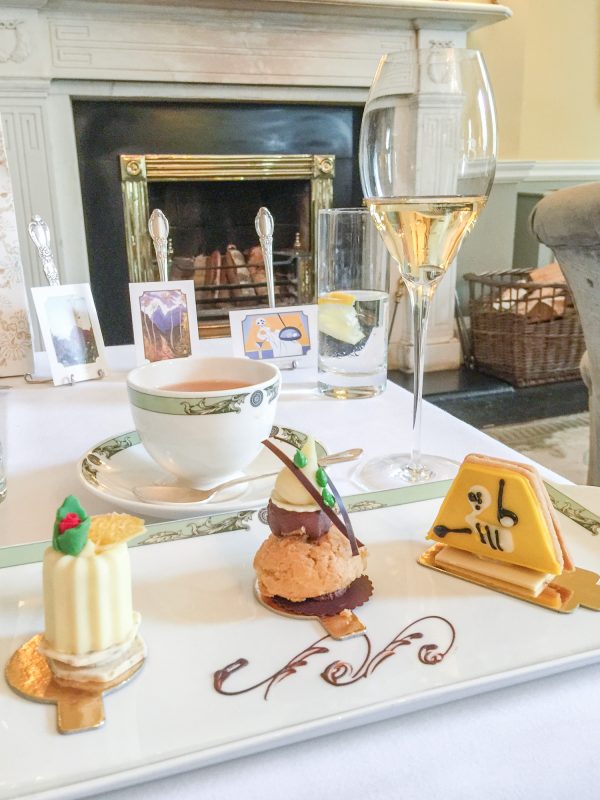 The second course featured three pastries inspired by paintings in the hotel. Two of the paintings were right in the room where we were seated. You can see the pastries and then the paintings that served as their inspiration on the little stands in the background. 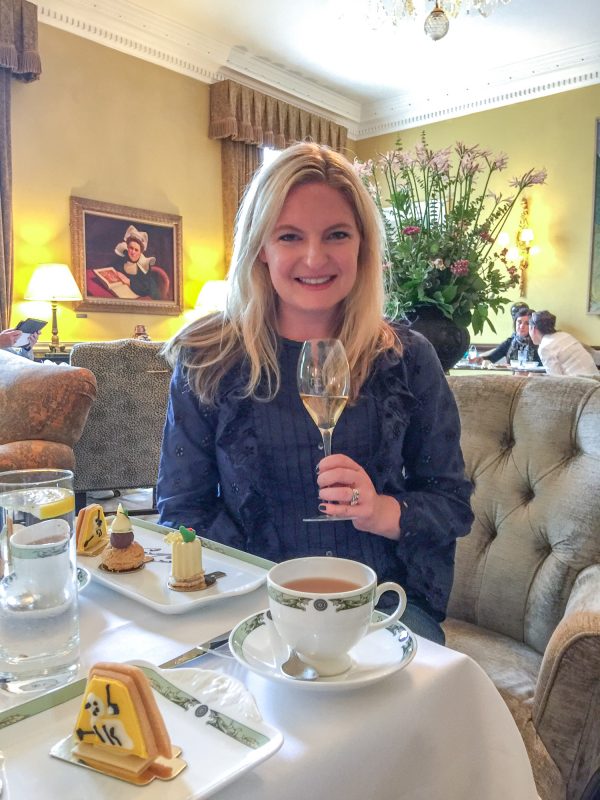 Even if you aren’t staying at The Merrion, I recommend their afternoon tea. It was elegant and the food was wonderful. 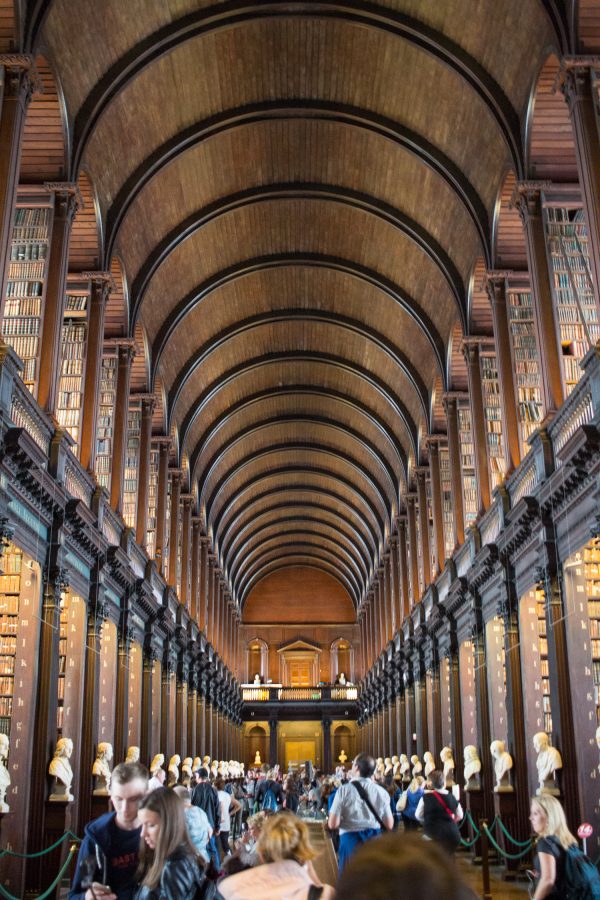 After tea we went back to Trinity – it was just a short walk from the hotel – to see the Book of Kells and the library. 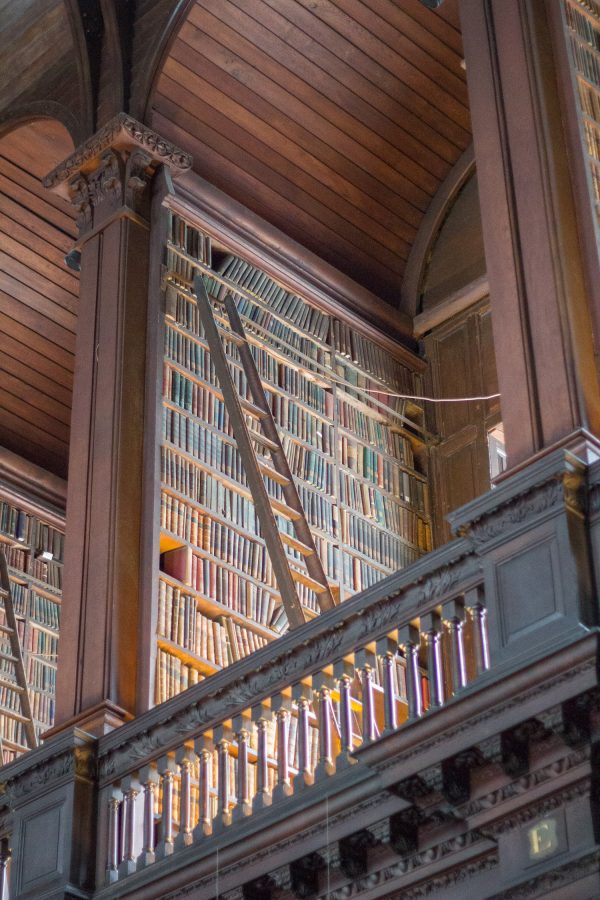 I thought the library was more impressive than the Book of Kells. 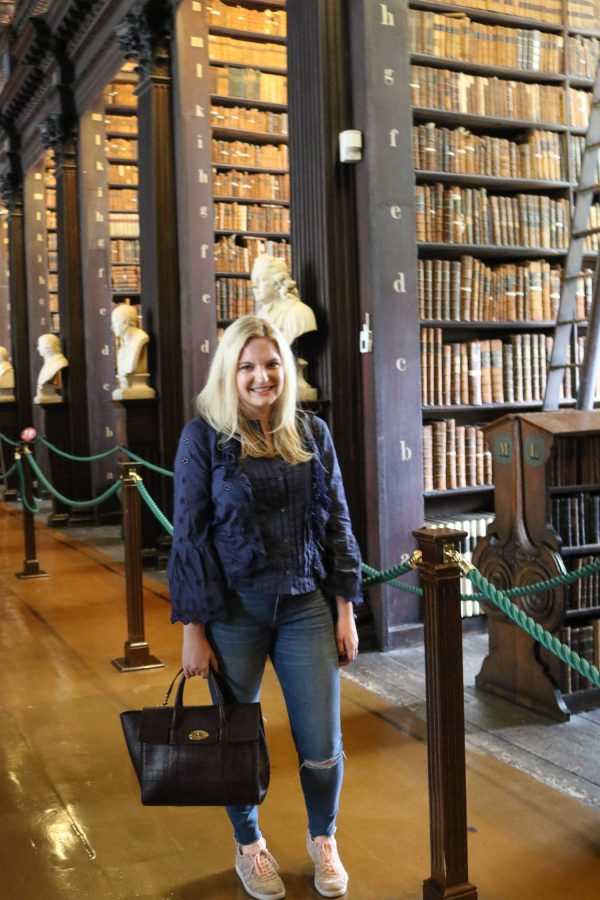 The library is home to priceless books, and it has a very unique organizational system. 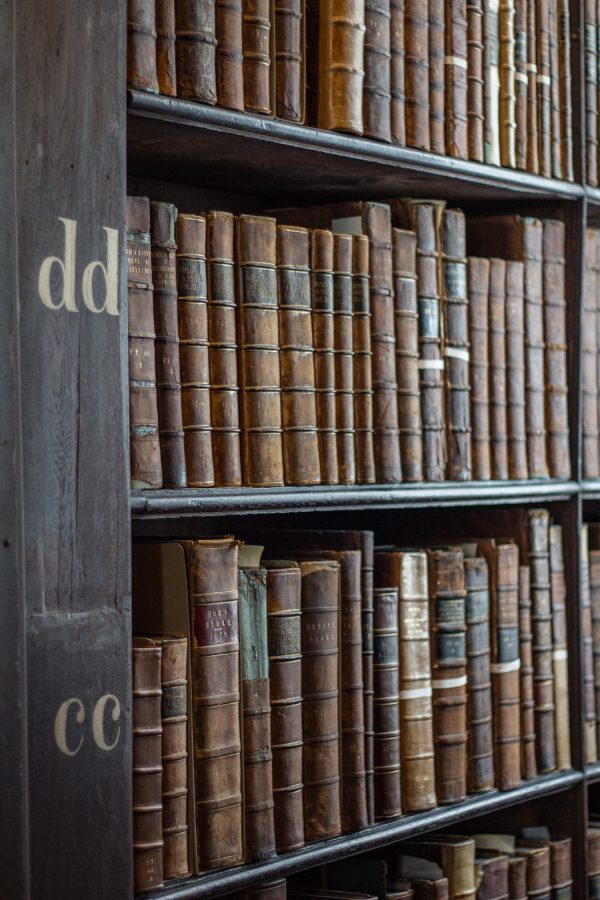 The books are arranged based on size so that they library can store the maximum amount of books. 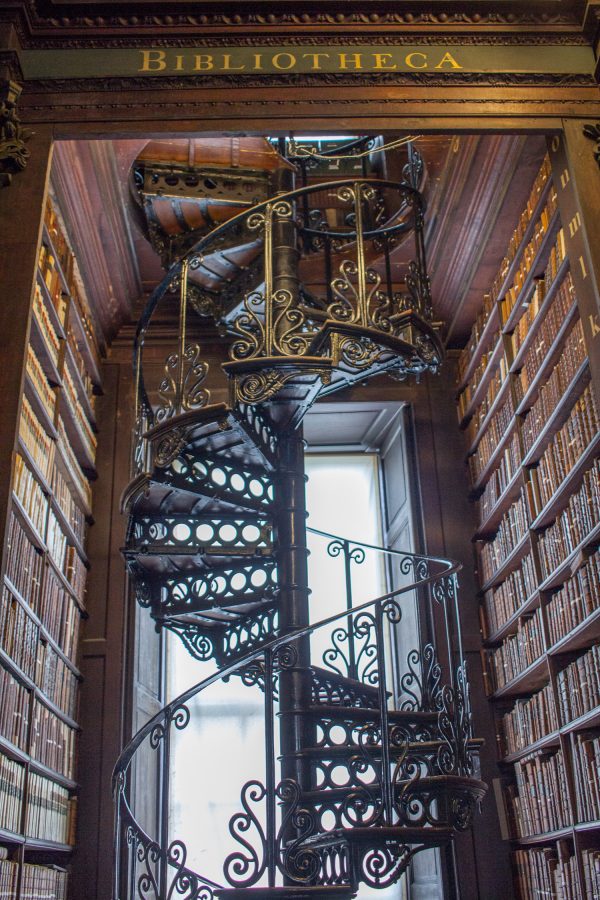 Isn’t is one of the prettiest libraries you have ever seen?! 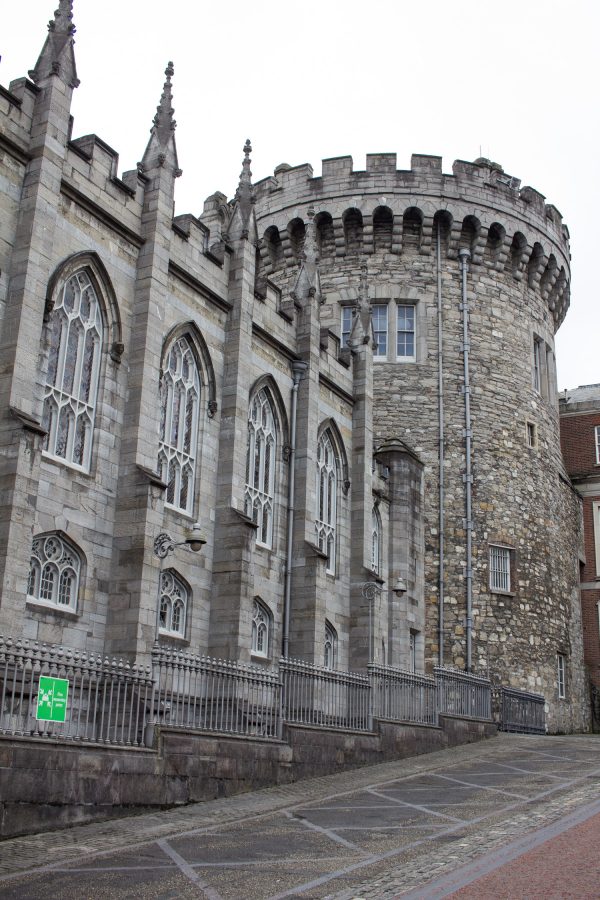 Our next stop was a nearby store to buy some Irish wool sweaters. It seemed like a very practical purchase considering how cold it can be in Chicago! Then we made our way to Dublin Castle. The castle is surprisingly hidden since it is part of a big government complex and it is behind other buildings. Today the castle is used for the inaugurations of the presidents of Ireland. Only one tower from the medieval castle dating back to 1228 survives, and it is the round tower pictured above. 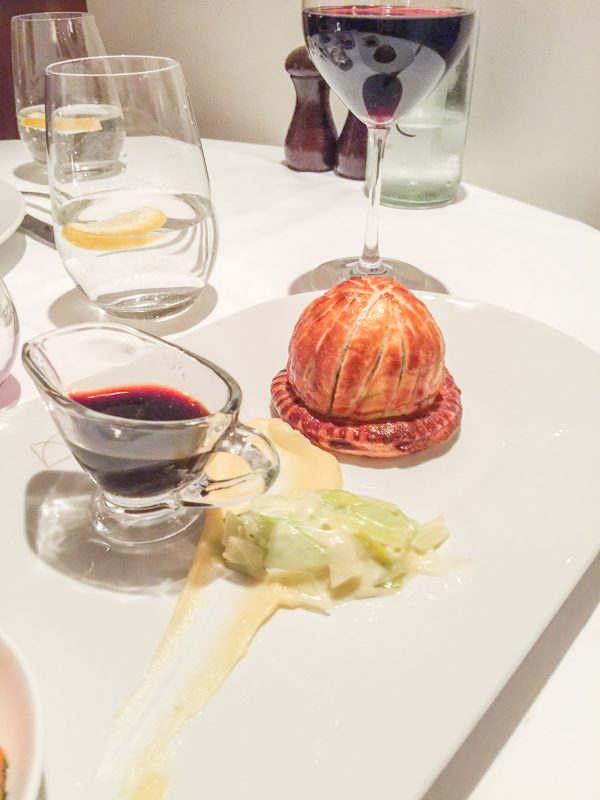 That night we had dinner at The Merrion’s The Cellar Restaurant where we had a lovely three-course meal. After we ate we went to The Quays Bar to listen to live music. It was a little touristy but we loved the live music. The musician, Dan Elliot, managed to create this own medleys mixing Ed Sheeran with Eminem and The Chainsmokers. He was so talented, it was like listening to someone sing Girl Talk mixes.

Our time in Dublin was short, but we had so much fun, and I am hoping to return to the city soon. You might have noticed that we didn’t stop at the Guinness factory. I have been before and highly recommend it – we just had limited time and couldn’t fit it into our itinerary. Surprisingly Charles hasn’t been to Dublin yet, and I have a feeling a trip to Dublin and Guinness is in our future.

If you have any Dublin recommendations please share them in the comments!