A guide of what to do in Budva, Montenegro… 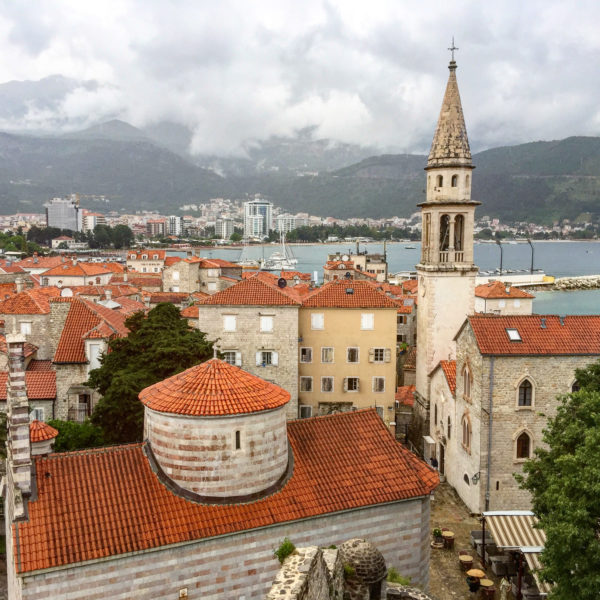 Budva is a beach town in Montenegro known for being a place to party. It’s just about 2 ½ hours from Dubrovnik and 30 minutes from Tivat and Kotor. While Budva has a reputation for its party scene, it is a historic city with a beautiful walled city beside the sea. It’s somewhat like a mini Dubrovnik.

Where to stay in Budva

We stayed at the Avala Resort and Villas and I highly recommend it. The rooms are massive – I have lived in apartments that were smaller, and the views of the Old Town could not be any better. 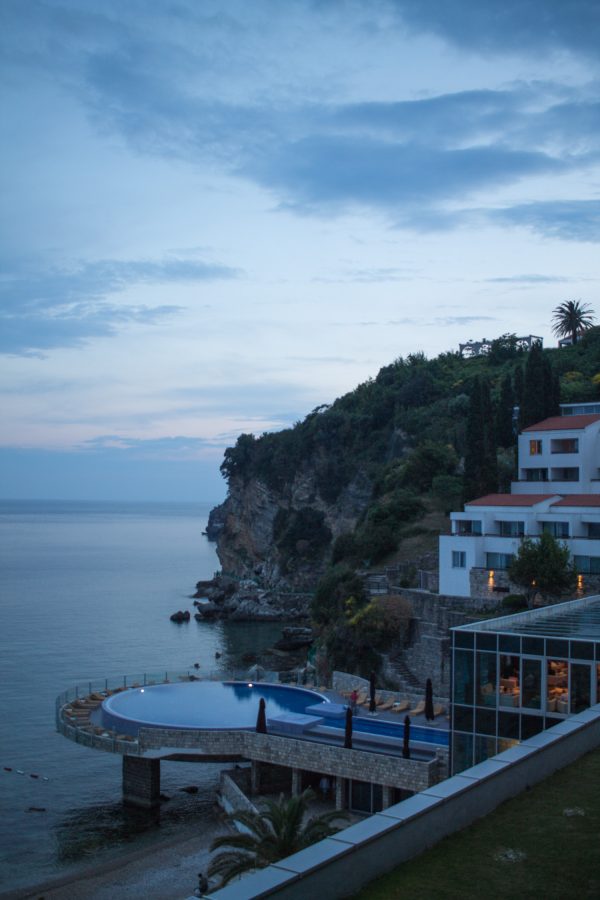 Our room had a small balcony and the hotel’s facilities are wonderful – there is a beautiful pool built over the sea and a beach. The only problem was the weather, which after being hot and sunny all week decided to be cloudy, rainy, and a bit chilly. If we had nicer weather we definitely would have hung out at the beach and pool – that was the initial plan. Instead, we ended up spending time wandering around the old town.

What to do in Budva, Montenegro

We had dinner at Konoba Portun, and Charles loved it! They are known for serving fresh local seafood and Charles had their signature dish, octopus cooked in a clay pot with potatoes and carrots. We also tried local cheese, and I had a massive bowl of vegetable risotto. The waiter couldn’t have been nicer. At the end of the meal he offered us Rakija, the local brandy. I had plenty of Rakjia in Serbia, and I had already warned Charles that it is very strong. He was still surprised at its strength. 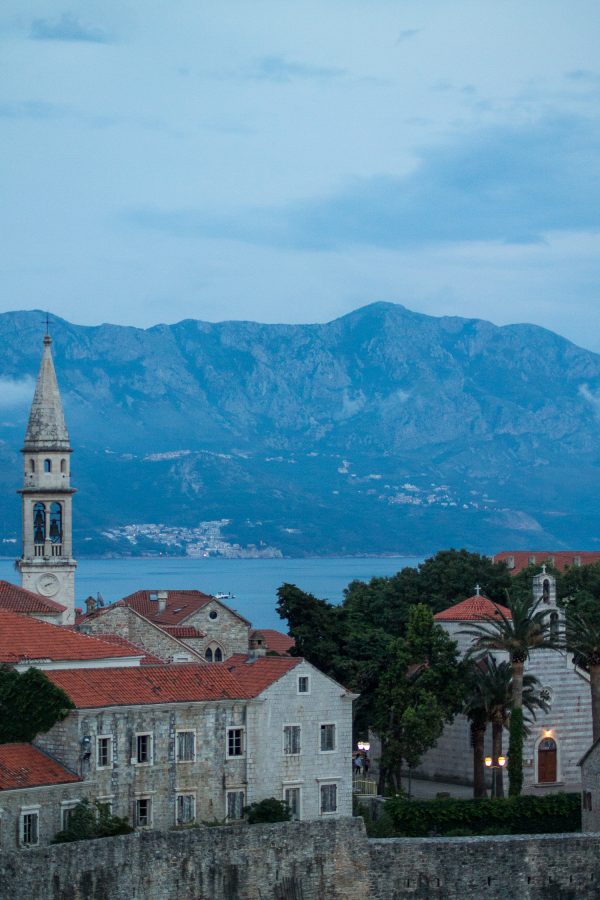 After dinner we went to Caspar, the most darling romantic little outdoor lounge. It’s the type of place that would be absolutely packed if we were in Chicago. But in Budva, we got a table no problem. We had a couple of rounds of drinks, Charles has noticed that martinis in the area aren’t the best, but the beer makes up for it. Caspar has a locally made house lager that we both liked. 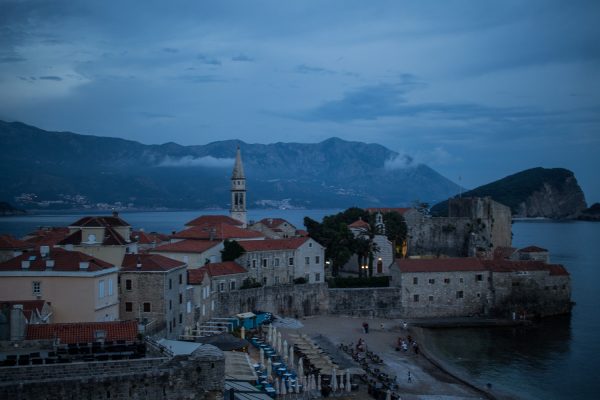 Then we went for a walk around and ended up at our hotel’s casino. We each took out 50 euros and decided to play a few games. Charles wasn’t very lucky, and I became determined to win back the money he lost, and after a couple of hours of playing roulette with some Russian and German men, I was successful. Charles was equally shocked and impressed. I cashed out with exactly 100 euros and we went back to Caspar for a nightcap. 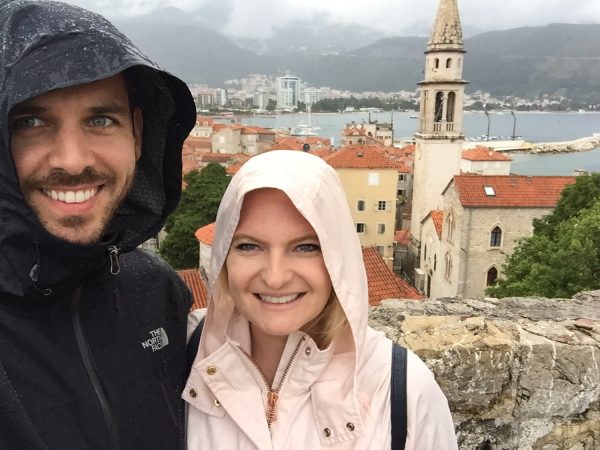 The next day we planned to walk up to the Old Town walls. Unfortunately, it was raining. We tried to wait out the rain at the tiniest little 11-seat English pub, but after a round of beers, the rain wasn’t stopping. We climbed to the top of the wall’s citadel in the rain, quickly enjoyed the view and snapped a few photos before moving on to Tivat, a modern city just 30 minutes from Budva. 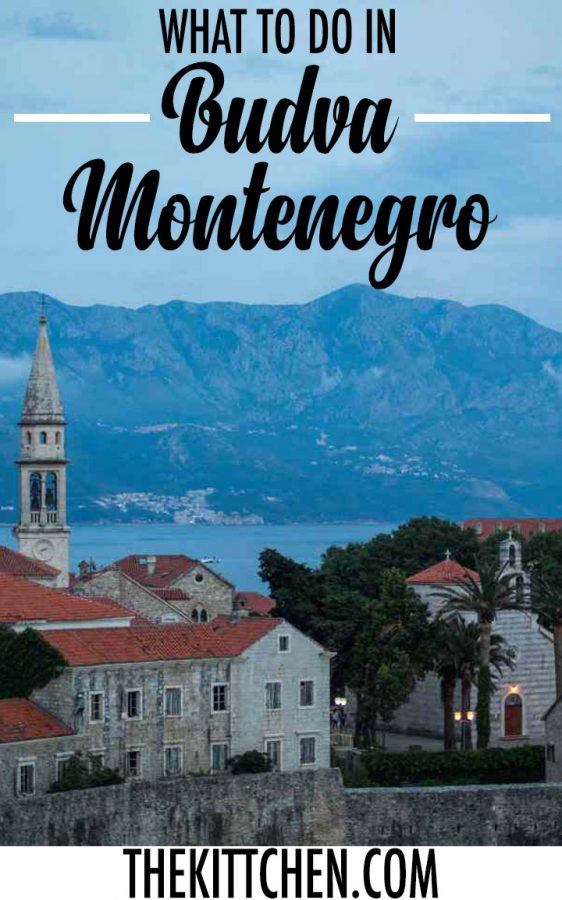