I spent last Saturday night at the Taste of Cayman and I am so excited to tell you all about the event! 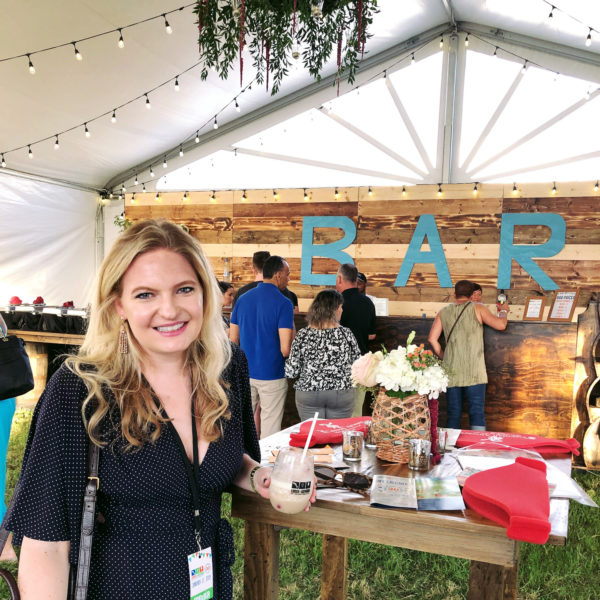 Taste of Cayman is a celebration of food and culture that brings everyone on the island together – locals, expats, tourists, families – everyone is there. Don’t confuse Taste of Cayman with the high priced Cayman Cookout, the Taste of Cayman Food & Drink Festival is affordable, accessible, and fun. General admission tickets are only $40 CI (about $50 USD). The event, which is hosted by the Cayman Islands Tourism Association, got its start as a chili cookout, celebrated its 30th anniversary last weekend.

At first glance, Taste of Cayman is much like Chicago Gourmet– except much more affordable and a bit more fun. The festival solves two of the problems that Chicago Gourmet has struggled with. First, full sized cocktails, beers, and glasses of wine are served at the event – not small tastings. Secondly, each restaurant has its own line, they aren’t bunched together, so the lines move quickly. 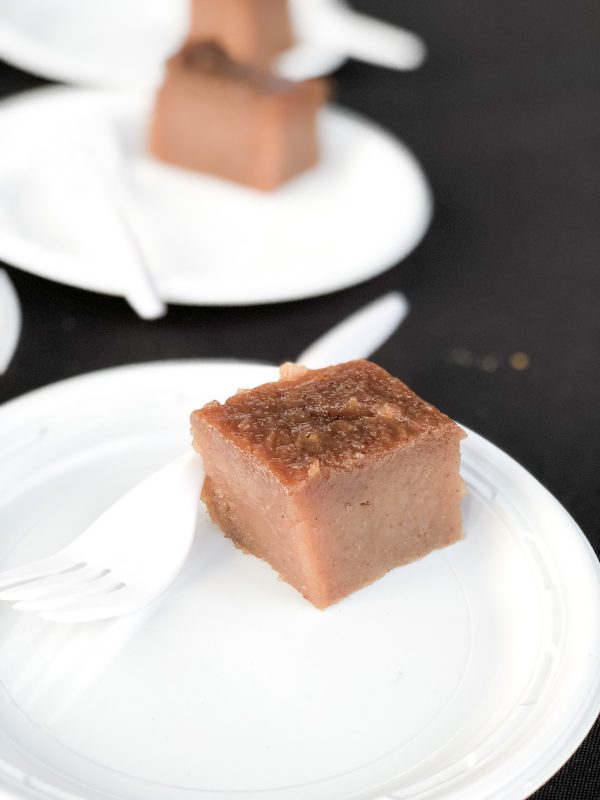 While the restaurants serving tastings of food are the main focus of the event, there are also cooking demos, recipe contests, musical performances, and fireworks. The restaurant tastings are part cooking competition – the attendees vote on the best restaurants and best dish. The Heavy Cake competition challenged local bakers to create the best heavy cake, a traditional Cayman dessert. 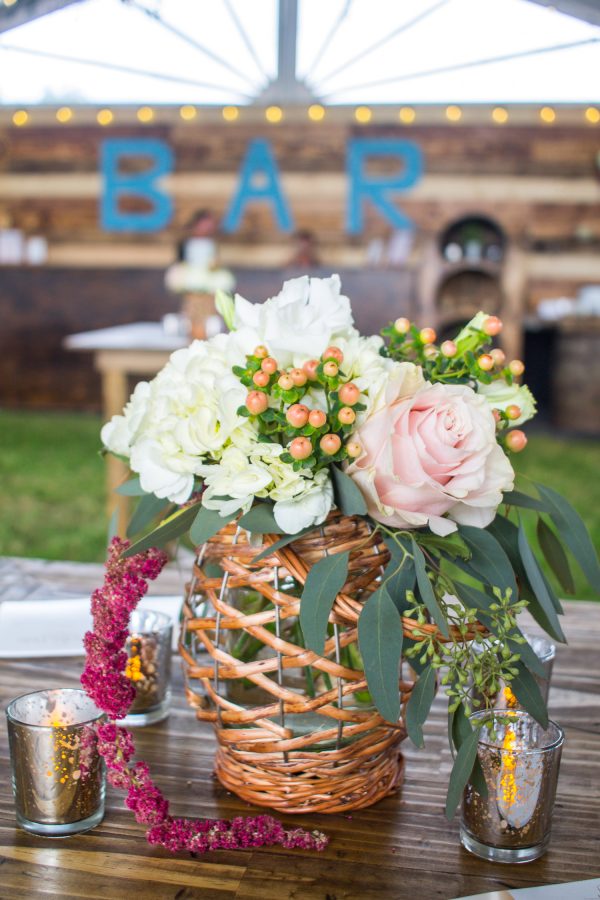 I loved the VIP area which had an air conditioned tent plus an outdoor viewing area for the concerts, exclusive food, and areas for lounging all designed by Save the Date Weddings and Events. Anchor & Den was serving up the most wonderful Chicken Carbonara with bacon, chorizo, and pumpkin and it was one of the best things I tried. 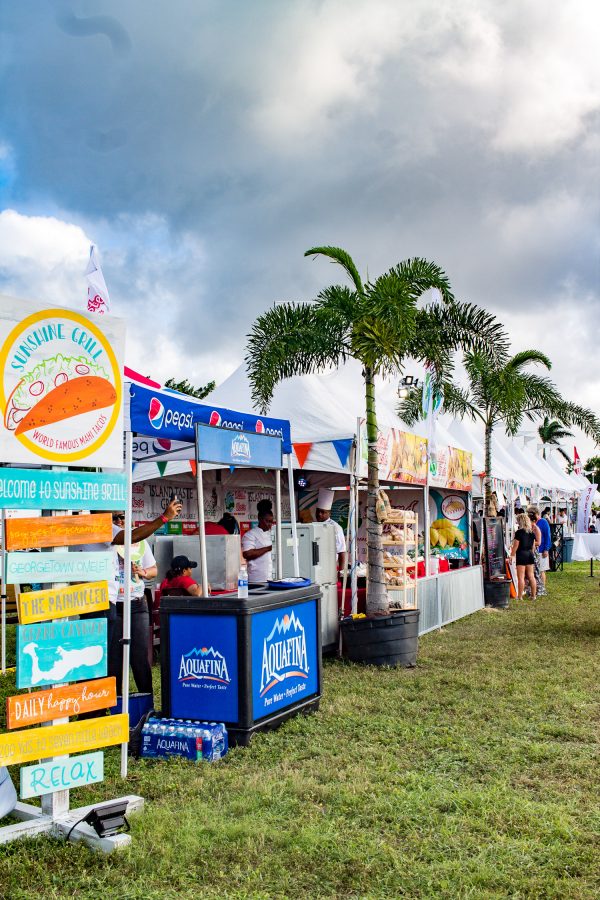 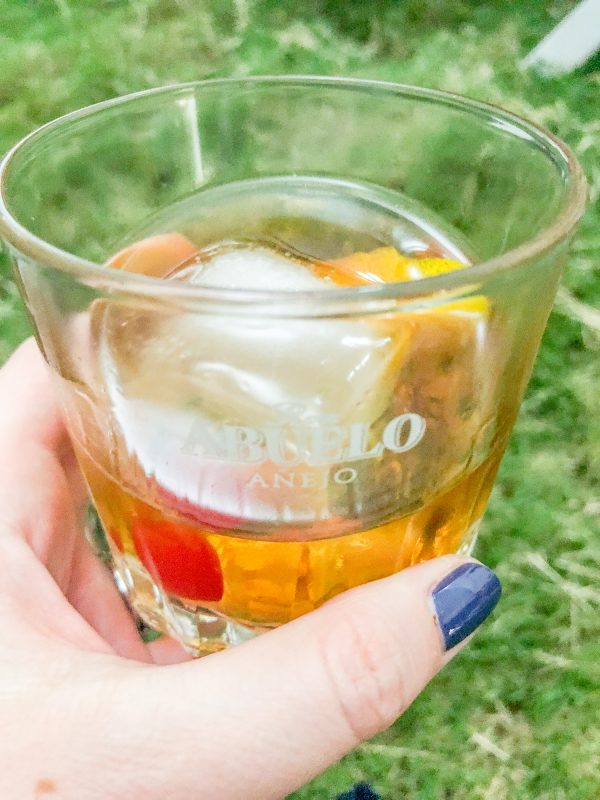 The experience room was a highlight for me – I attended a session where the island’s reigning Bartender of the Year, Cory Scruggs, was teaching how to mix up the most delightful rum old fashioned with Abuelo rum, vanilla simple syrup, and orange zest. 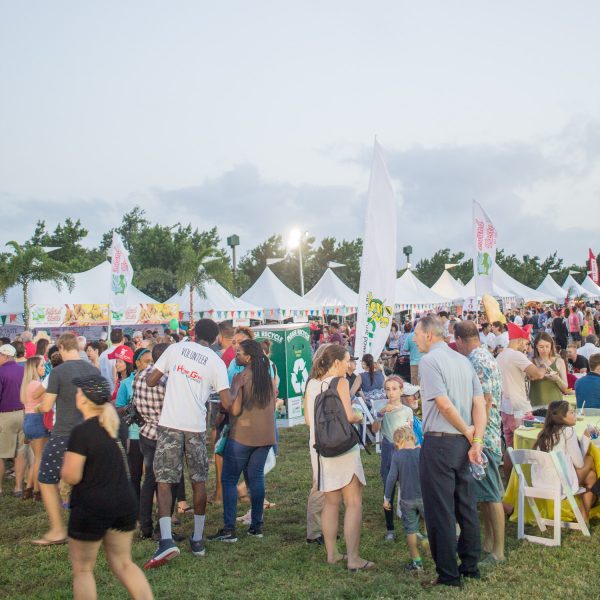 The Cayman Islands pride themselves on being a melting pot that embraces people from all over the world. Grand Cayman is also known for its culinary excellence. These things combine to make Taste of Cayman an exceptional event. I tried local cuisine like oxtail nachos and mudslides, plus Caribbean foods like Jamaican patties, European classics like risotto, and a vegan/Asian vegetable tempura. I noticed that there were a great amount of options for vegetarians too.

I loved the wide variety of foods being served at the event. Here is a recap of some of my favorite bites: 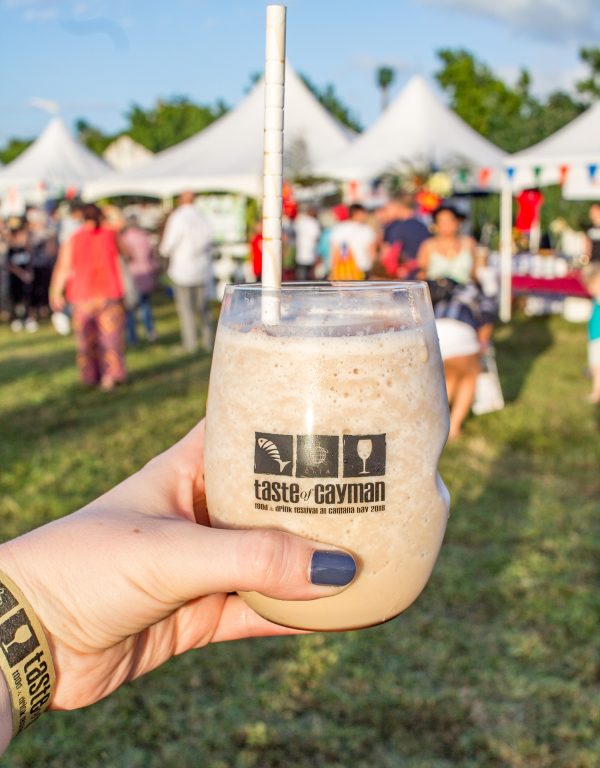 I had to start the night off with a Mudslide from Wreck Bar at Rum Point. It was the perfect thing to sip on while the heat from the day faded away. 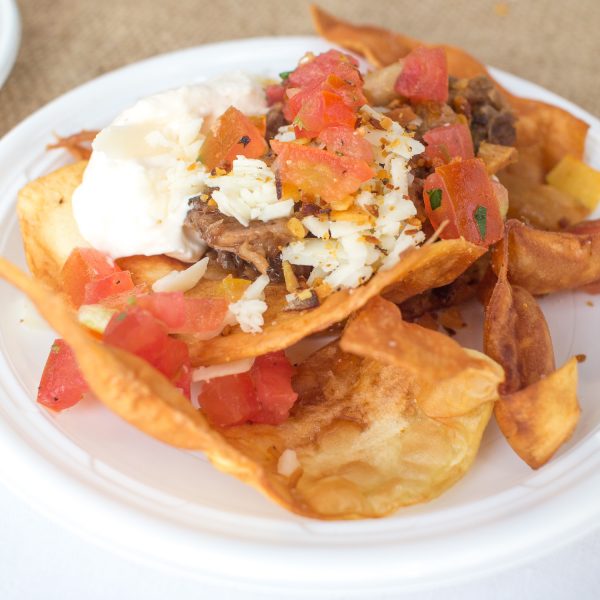 Cayman Cabana made Oxtail Nachos with sweet potato chips, coconut bacon, and lime crema. I loved the crunchy homemade chips! I went to Cayman Cabana the day before – it is right on the water in Georgetown and it’s a really fun place for a meal or just a drink. 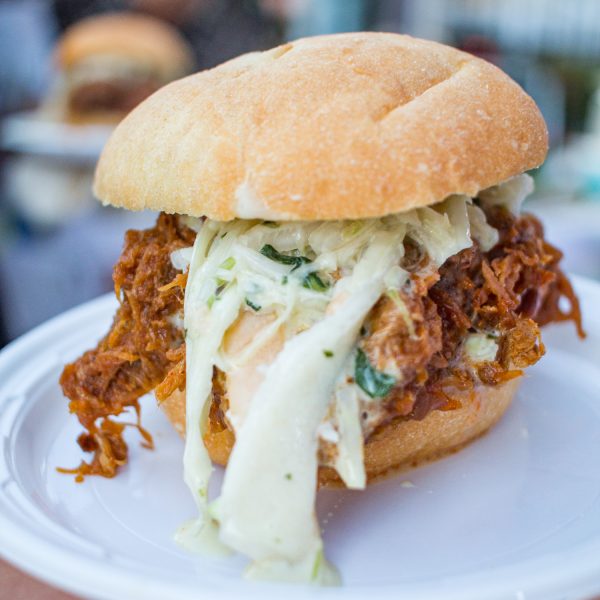 The Brasserie was making incredible Mustard BBQ Pork Sliders with garden papaya claw, which earned them the longest line at the event. 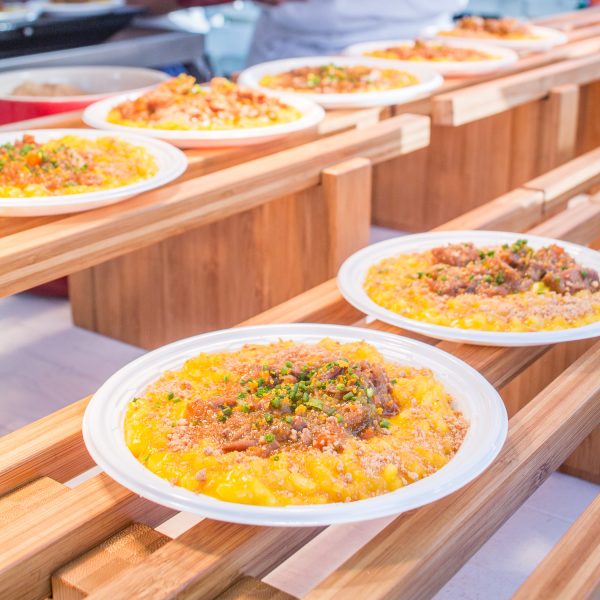 Andiamo Italian Kitchen, which is one of the restaurants at The Ritz-Carlton, prepared pumpkin risotto with ossobuco ragu. It was so delicious I was tempted to have a second plate. 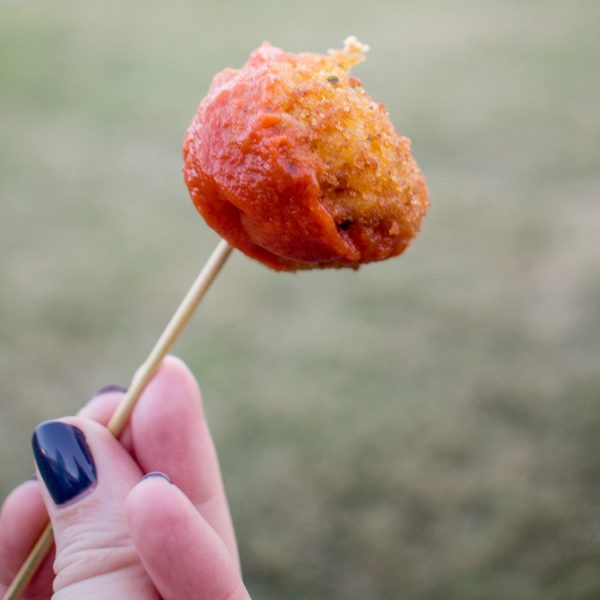 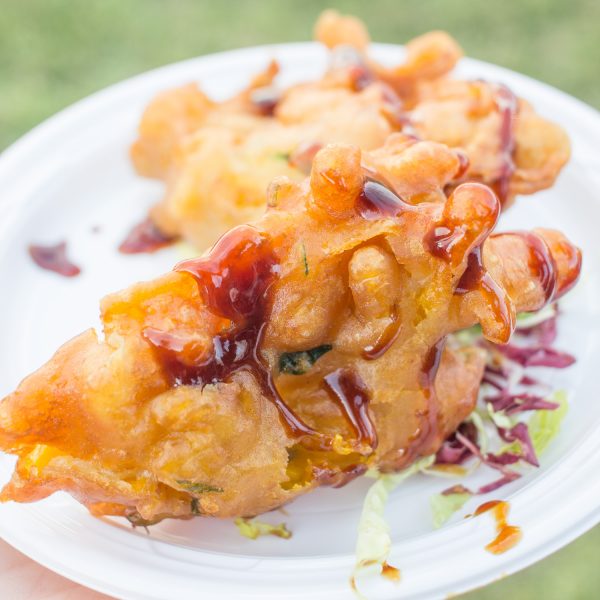 Vivo, an alternative restaurant with vegan, vegetarian, and gluten-free options, was serving a vegetable tempura made with local zucchini and local pumpkin. I loved how crunchy this was on the outside and how light it was on the inside. The funny thing about Vivo is that the menu is entirely vegetarian – but they serve Lionfish because it is an invasive species and they want to help limit the population of the fish. 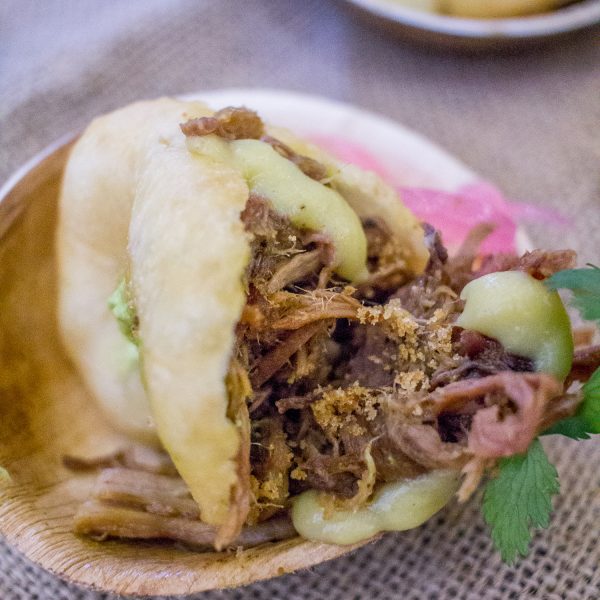 Smokies was making mini pulled pork sandwiches on bread made with cassava.

Once I was happily full, it was time to turn my attention to the stage where a series of tribute performances honoring Journey, Stevie Wonder, Prince, and Michael Jackson. And of course, there was a fireworks display. It was such an incredible night! While Grand Cayman has so much to offer guests year-round, you just might want to plan a trip around Taste of Cayman.

Thank you for Taste of Cayman for hosting me for the weekend and event.

Calypso in the Country

Sounds like a great event! We have taken our family to Grand Cayman for many years. Such a wonderful island! Shelley

It was my first time and I can't wait to go back!

I'm always on board for a festival that I can eat my way through!

Me too! And the food was exceptional!

I absolutely loved it!