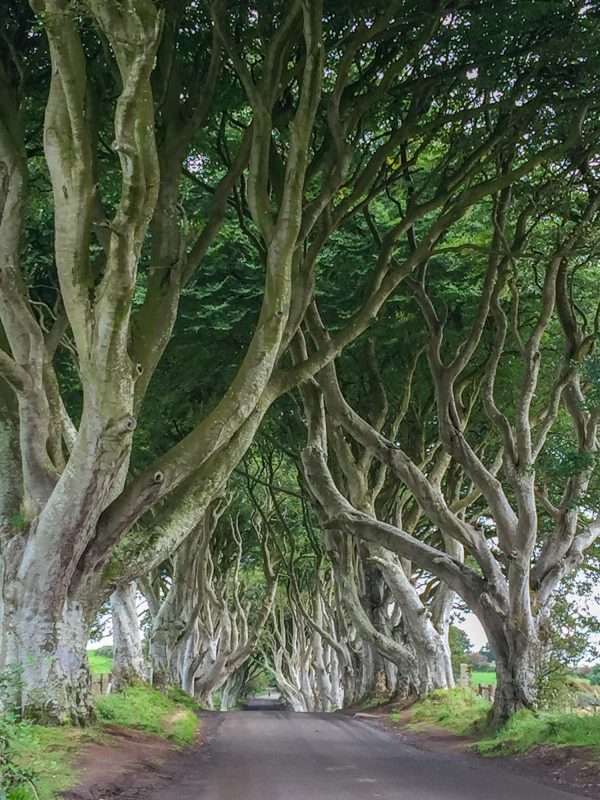 My sister, Kelly, loves Games of Thrones, and she loves to travel. I don’t watch Game of Thrones (yet), but I have a thing for visiting their filming locations. When Kelly asked me if I wanted to join her on a quick trip to Ireland in September, I immediately agreed and she took on the task of planning. 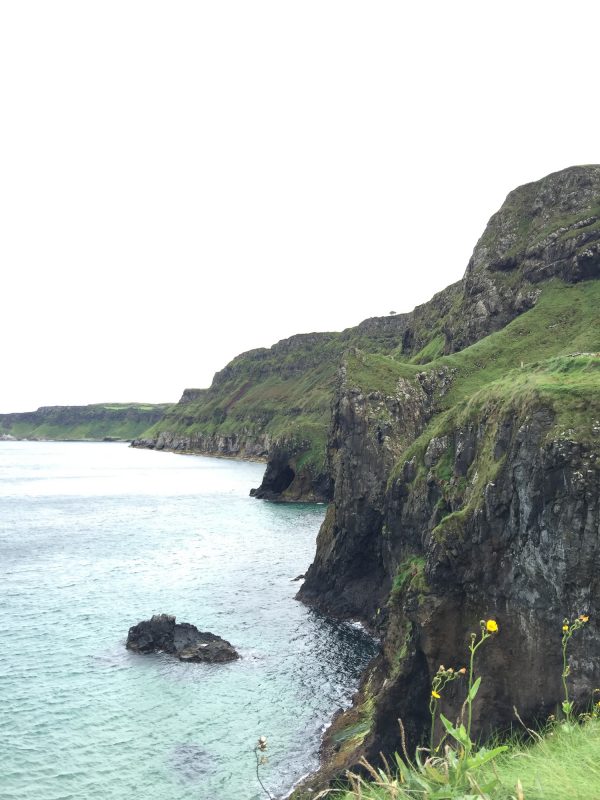 This self-guided driving tour took us from Donegal to Dublin in about 8 ½ hours. It’s long, but the drive is gorgeous. We loved it! We wanted to see as much as possible, and we wanted to drive ourselves. A big benefit to driving ourselves was that many of the Game of Thrones Tours don’t give you much time to explore – Kelly said in some cases you just drive by sites and don’t get out of the bus. We also go to add extra stops to our tour. Kelly planned this drive, and as always, she nailed it. She researched the heck out of everything and our day was so fun and it went smoothly. 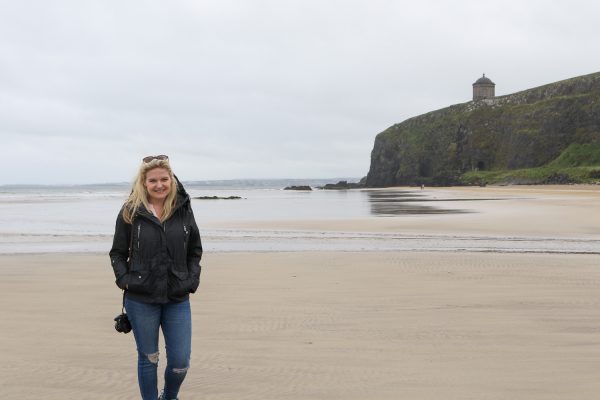 Downhill Beach is a beautiful stretch of beach with cliffs and Mussenden Temple. It is easy to access and definitely worth visiting. The area was used as Dragonstone on Game of Thrones. 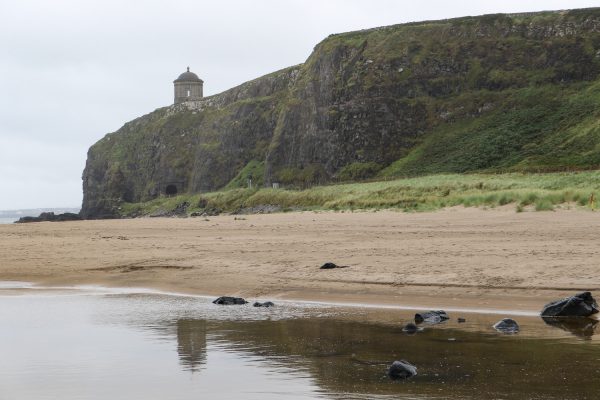 One thing to know about the beaches in Ireland is that you can drive right onto them. The sand is firm so it is unlikely your car will get stuck. 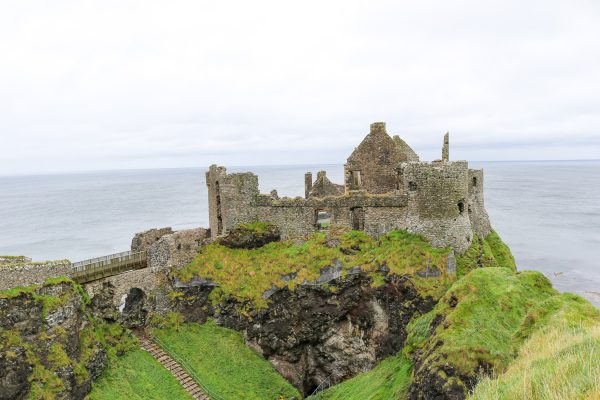 Dunluce Castle is a castle on the coast that stands in ruins. It was used as Castle Greyjoy on Game of Thrones.

The castle was built in the 13th century and is on a steep cliff. You can pay to tour the castle grounds, or just quickly stop for photos, which is what we did. 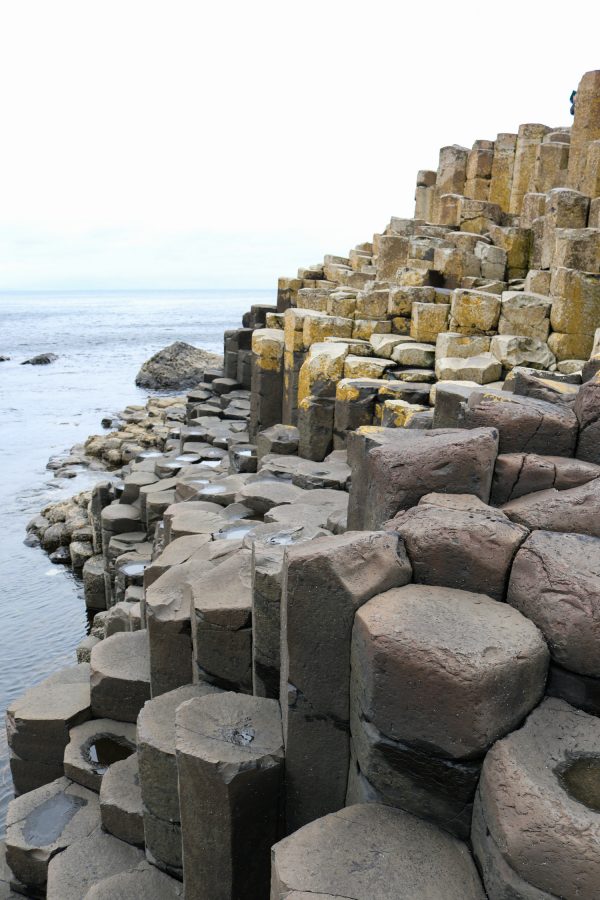 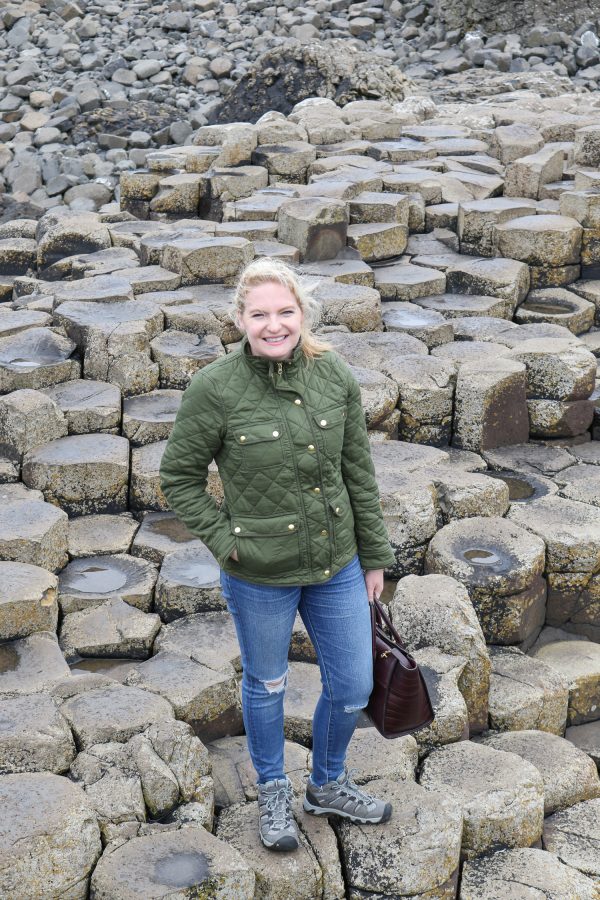 Giant’s Causeway is easy to visit and very accessible. There are a few important things to note. First, it has a parking lot next to the entrance, and there are many overflow lots in the town. Parking is included in the admission price. When we saw the overflow lots we considered parking there, but we were pleased to find plenty of spots in the lot on site. Giant’s Causeway is about a 15-minute walk from the entrance where you buy tickets. If you don’t want to walk you can hop on a bus that will take you right to Giant’s Causeway for about 1.20 euros. You really want to wear waterproof shoes to Giant’s Causeway. Kelly and I bring our Keen Coven Waterproof Hiking Boots everywhere. I accidentally stepped right into a big puddle and my foot didn’t get wet at all – and there are lots of puddles at Giant’s Causeway. The boots also have great traction for climbing up the stones. 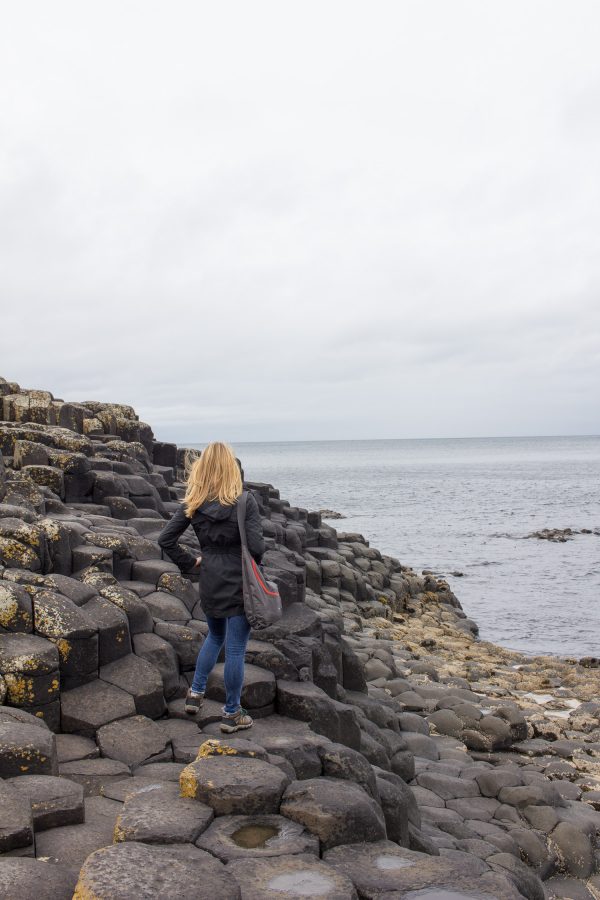 Once you make it to Giant’s Causeway you can climb the stones, explore, and take photos. It was one of the quicker stops on our day trip. 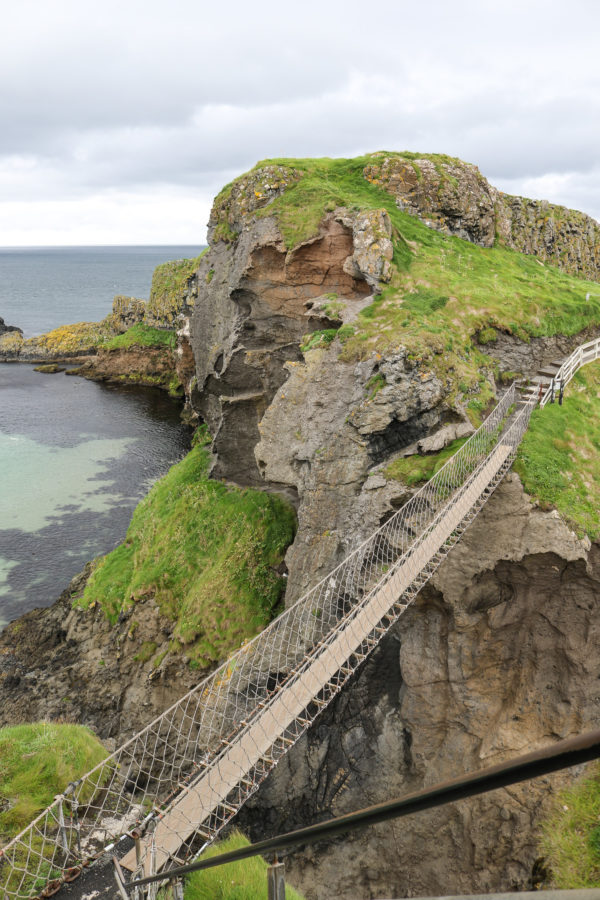 Carrick-a-Rede is a famous rope bridge on the coast of Ballintoy. It is just 7 miles from Giant’s Causeway. It is worth noting that you will drive through Bushmills on your way to Carrick-a-Rede. We did not stop for a tour and whiskey tasting because we didn’t have time and we were driving.The bridge was originally built by salmon fishermen and has been rebuilt many times, but bridges to the small island have existed for over 350 years. 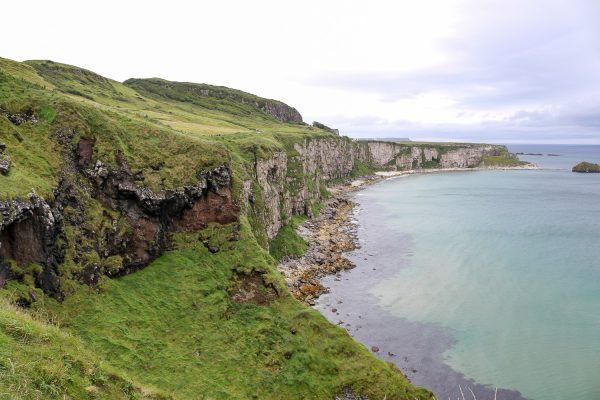 The bridge was originally built by salmon fishermen and has been rebuilt many times, but bridges to the small island have existed for over 350 years. In recent years the bridge has become a major tourist destination, likely because it is so close to some Game of Thrones filming locations. 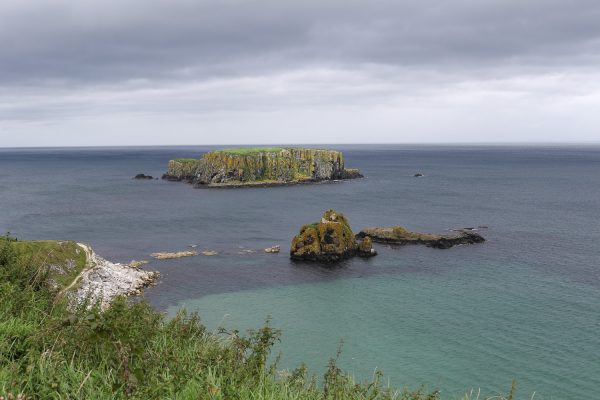 The rope bridge at Carrick-a-Rede is often closed due to high winds, and it was closed on the day we visited. We were glad that we got to see it, and we were happy that the bridge was closed. The bridge is small and narrow and I am certain we would have had to wait an hour or two if we had wanted to cross it. Be prepared before going to Carrick- the bridge was much smaller than we anticipated and we were underwhelmed (but it is a beautiful area!), you might not be able to cross the bridge, and there might be a long wait to cross the bridge. If you want to avoid a wait, you can pre-purchase timed tickets. 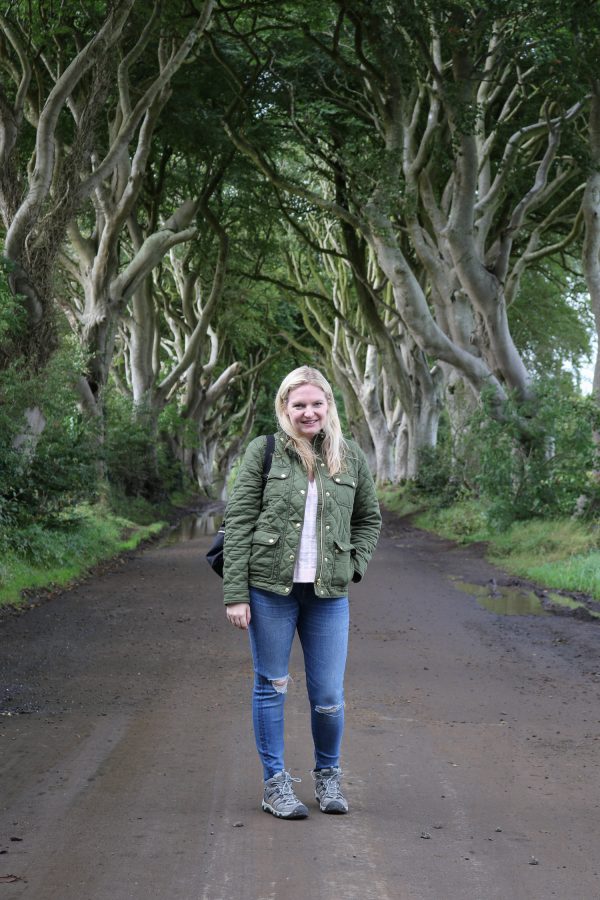 Dark Hedges is a row of beech trees that were planted in the 18th century. Today it is a popular destination for tourists since the road was used as The King’s Road on Game of Thrones.

Kelly and I followed signs to Dark Hedges and ended up parking in a parking lot and walking over. There were many people who drove right to Dark Hedges and pulled over to walk around and take photos. I am not positive this is allowed, but be prepared for a couple of things – people and cars everywhere. We used some creative camera angles to hide other people and cars in our photos. 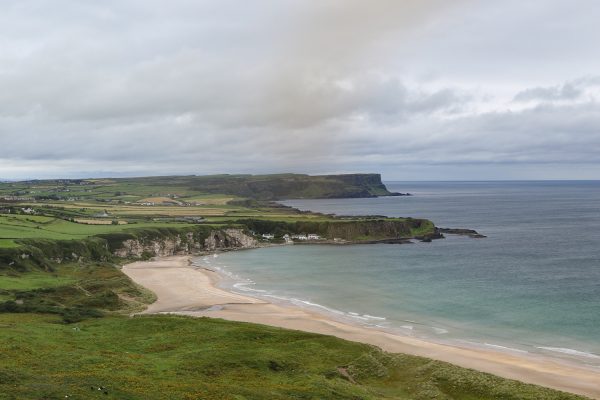 And a few notes about car rental and driving in Ireland. We rented our car from Avis at the Dublin Airport. Most cars are stick shift, and they drive on the other side of the road. Fortunately, my sister drove, but she said it took a little while to get used to the fact the gear shift was on the opposite side. The Irish love roundabouts, so be prepared to go through lots of them. They are a little confusing. Lastly, we did opt to rent a GPS and we were glad that we did. All in, the cost was about $240 for three days (because we needed the car for two days in Donegal first).

When it comes to what to pack, this part of Ireland is notoriously rainy. It isn’t warm either. I wore lots of the same stuff that I packed for a trip to Iceland in June. It’s wet and chilly and you want to try to stay warm and dry. Waterproof shoes and a rain jacket are essential. I recommend waterproof hiking boots instead of rainboots because they have better traction and you will be walking a lot.

And in case you need a playlist to listen to… 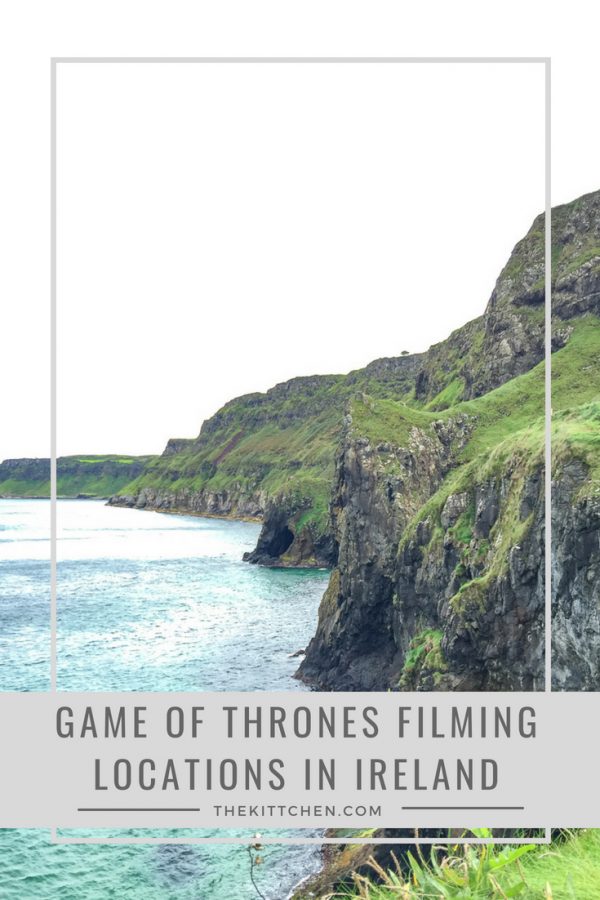 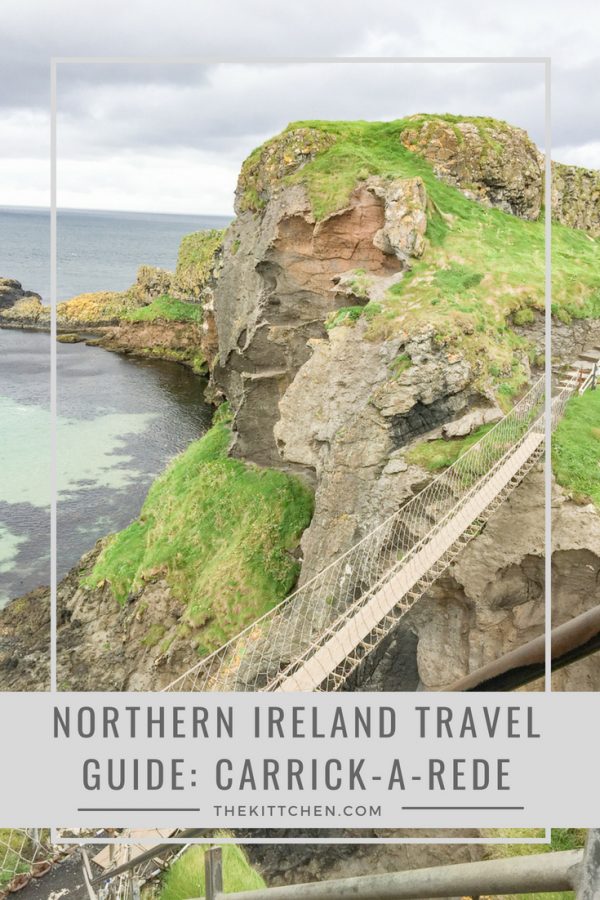 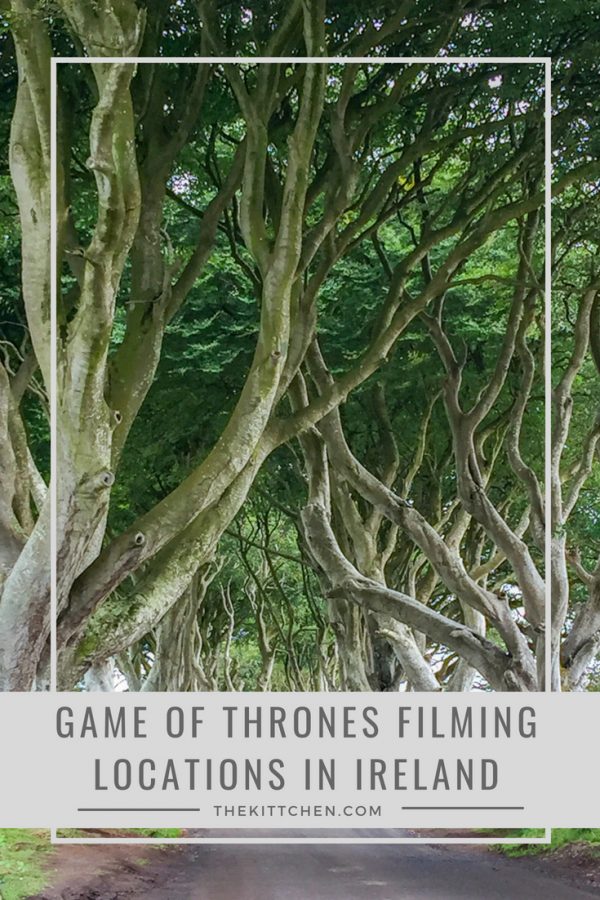