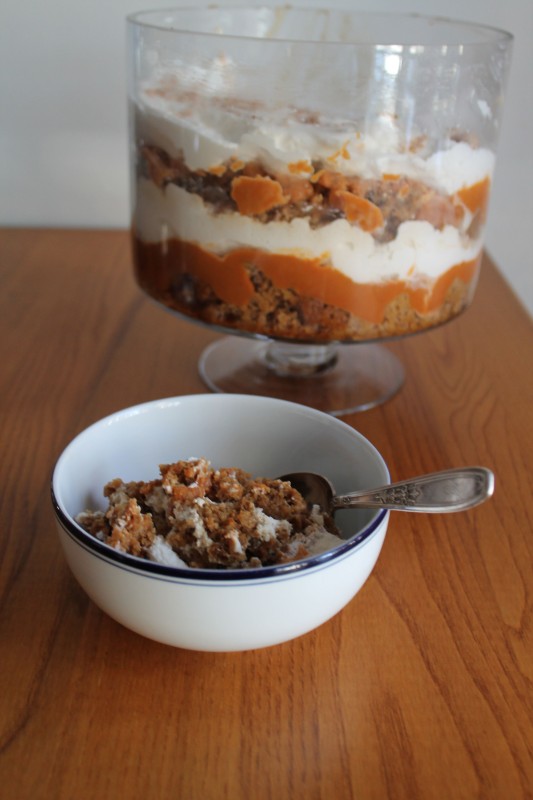 Pumpkin Gingerbread Trifle is a decadent Thanksgiving-meets-Christmas dessert, and it was a big hit at the Christmas Eve party. I was a little skeptical about this dish, which my mother made, because I am not a huge fan of gingerbread or pumpkin. I thought that the Pumpkin Gingerbread Trifle was a pleasant surprise. The pumpkin and gingerbread flavors matched each other more than I had expected, and the dessert was much lighter than I had anticipated.

The heath bar bits added a nice crunch to the dish; I also tend to think that heath bar makes everything better. The original recipe called for a crushed gingersnap topping, but I think that all of that gingerbread flavor would have overwhelmed the pumpkin. I think heath bar is a better topping because the toffee is a nice addition, but also because the toffee won’t get soggy if it sits on top of the whipped cream for a while. If you choose to top the trifle with gingersnaps, add them to the trifle right before serving so they don’t get soggy.

Step 1:
Bake the gingerbread mix according to the directions on the box.

Step 2:
While the gingerbread bakes, prepare the pudding and let cool. Once the pudding has cooled, stir in the pumpkin pie filling, sugar, and cinnamon.

Step 3:
In the bowl of an electric mixer, combine the whipping cream, powdered sugar, and vanilla. Beat at a medium high speed until the cream forms soft peaks.

Step 4:
Crumble half the gingerbread into the bottom of a large glass bowl. Layer half the pudding mixture on top, and spread a layer of whipped cream over. Repeat adding second layers of gingerbread, pudding, and whipped cream. Sprinkle the heath bar bits over the top. Refrigerate overnight. 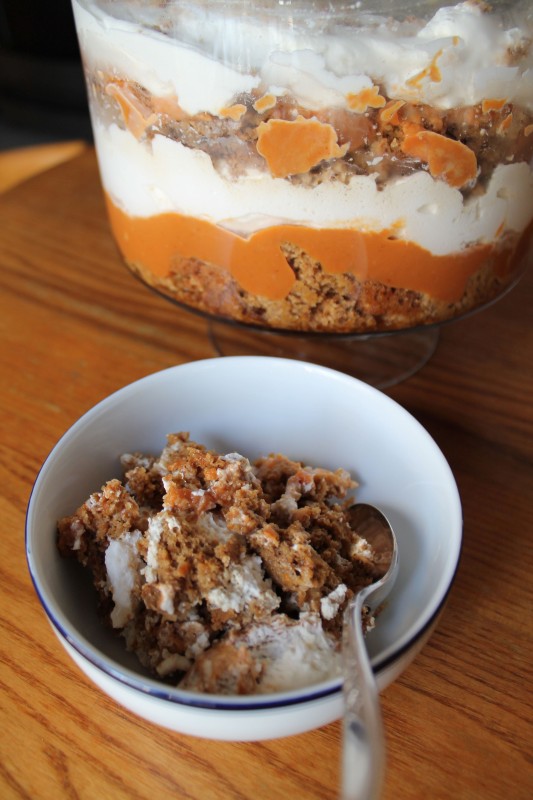