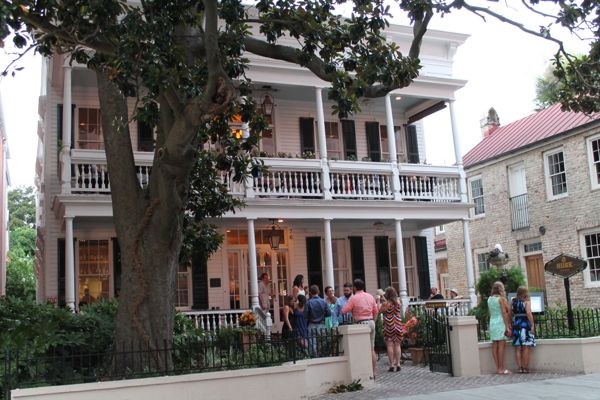 When I told everyone that I was going to Charleston, those of you who have been to Charleston spoke up and told me to go to Husk. My social media filled with statements like “Please tell me that you are going to Husk!” So naturally, I scurried on over to Open Table to book a table. Everyone’s strong recommendations set the bar high. Maybe too high.

Husk is a modern Southern restaurant that utilizes local ingredients and presents a modern take on Southern food. When you walk in the front door a large blackboard lists the ingredients and where they are sourced. All of the main ingredients are sourced in the South. The restaurant itself has the look and feel you would expect from a classic Charleston restaurant, right down to the front porch. It is rustic and laid back. Even the dishes, made of hand thrown simply glazed ceramics or carved wood express this vibe. 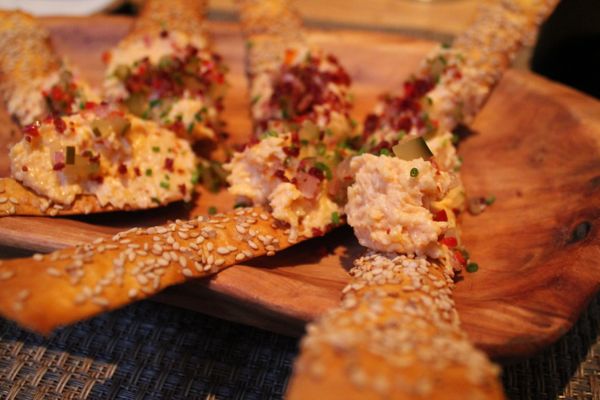 We started things off with a couple appetizers. I did my research before dinner and had read great things about the Pimento Cheese. This is definitely a Southern dish that you can’t find at many restaurants in Chicago. The portion was huge. The pimento cheese was served on homemade sesame crackers with pickled relish and crispy country ham. It had a mild spice, and the thin crispy crackers were a fun way to serve the dish. 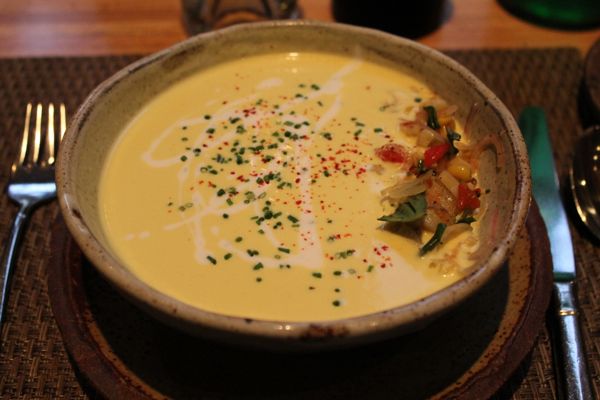 Charles started with the chilled sweet corn soup. I had never heard of a corn soup served like a gazpacho before, but it was surprisingly good. The soup had shrimp, spring onion, pepper relish, fennel, and creme fraiche. The pureed creamy corn soup served as the base, which contained chunks of the other ingredients. It was a lovely mix of texture and flavors and perhaps the best thing we tried. 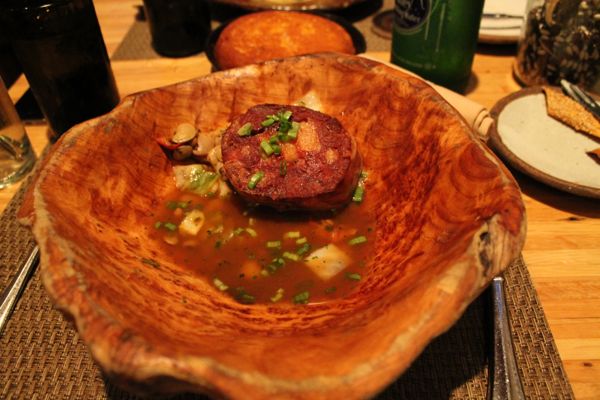 For an entree, Charles had Slow Cooked Pork. The pork itself was fall apart tender, and the presentation was quite interesting. The pork was served in a soupy sauce containing roasted cabbage, butter beans, and red peas. While we loved the taste of this meal, we thought the presentation was a little off. The soup like sauce was creative, but it didn’t quite fit the dish.

We shared a side of the skillet cornbread with bacon. I was particularly excited, and then disappointed by this side dish. It was dry and nothing special. We both love cornbread, but we both ate only a taste of this. 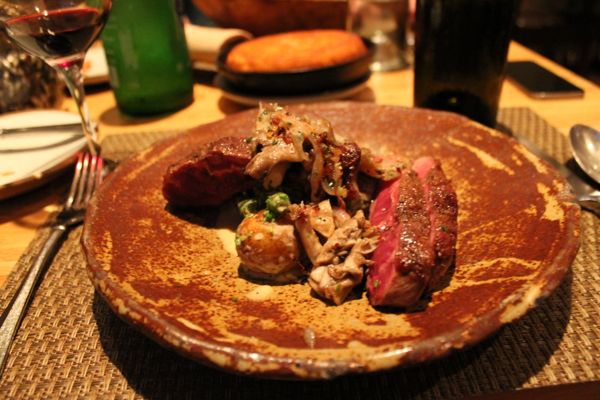 I had the Tennessee Flat Iron Steak served with Bacon Cream and Marinated Mushrooms. I liked it, but I didn’t love it. I live in a city known for its steakhouses, so it may have been a mistake or order a steak anywhere else. The cut and quality of the meat just couldn’t compare to the dry aged steaks in Chicago. I did think that the combination of the bacon cream and marinated mushrooms was suburb.

This meal had been very hyped by many people. During the meal Charles asked, “Is it just me, or is this not that great?” It certainly wasn’t a meal that we will remember forever, but it was fun. We might not remember what we ordered 5 years from now, but we had a nice night. For two Chicagoans, the price of $135 (including everything mentioned plus 2 glasses of wine) was a bit of a deal.

Husk became instantly famous in Charleston because they were creating such innovative food. Now a few years have passed, and there are other restaurants preparing farm to table cuisine and more Southern restaurants have modernized their menus. I hate to write this, but based on what some locals have told me, Husk isn’t the best place to try great modern Southern meals anymore, and I am inclined to believe them. The easiest way to explain my feelings about Husk is that reading the menu sounded better than the executed meals tasted. I do want to thank everyone for their sincere recommendations, and I am glad that we did get to experience Husk.

The menu at Husk changes nightly and is based on what is seasonally available. The restaurant does accept reservations. If you want something more casual, the Husk bar is next door and they serve bar food.