Helsinki is a city for foodies! The restaurants are simply incredible. Today I am sharing my guide of where to eat in Helsinki! 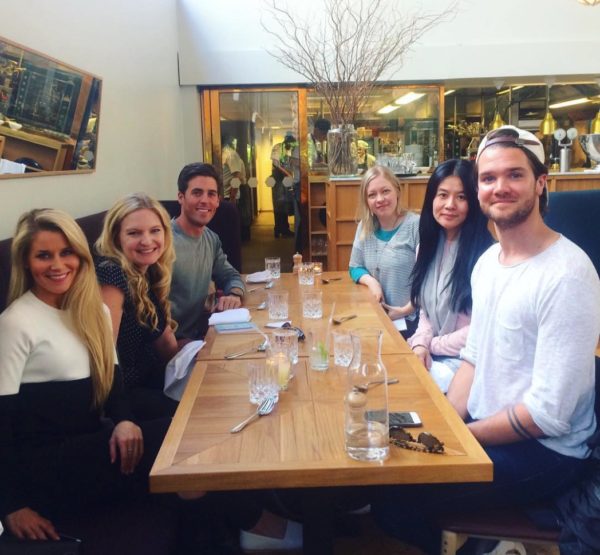 We ate like kings when we were in Finland. We tried local cuisine ranging from asparagus soup to reindeer heart and arctic char. We ate at some of Helsinki’s top restaurants, included the Michelin starred Olo. Here is a quick rundown of where to eat in Helsinki and some of the stand-out menu items.

Where to Eat in Helsinki: 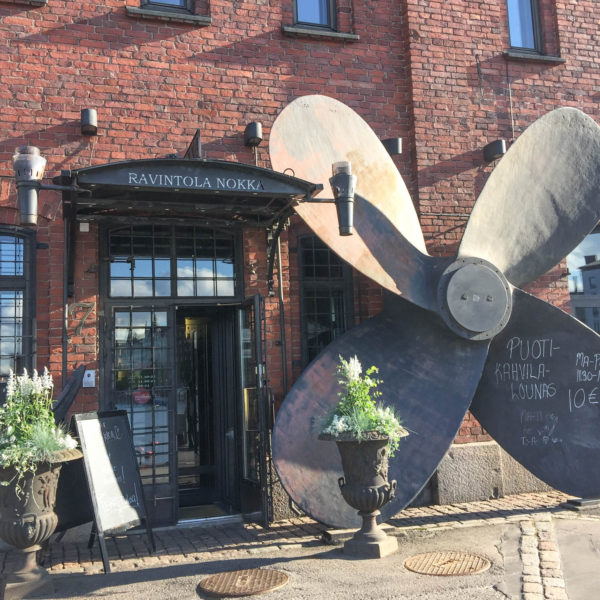 On our first evening, after checking into our hotel, we ate ate dinner with Finnair at Nokka. 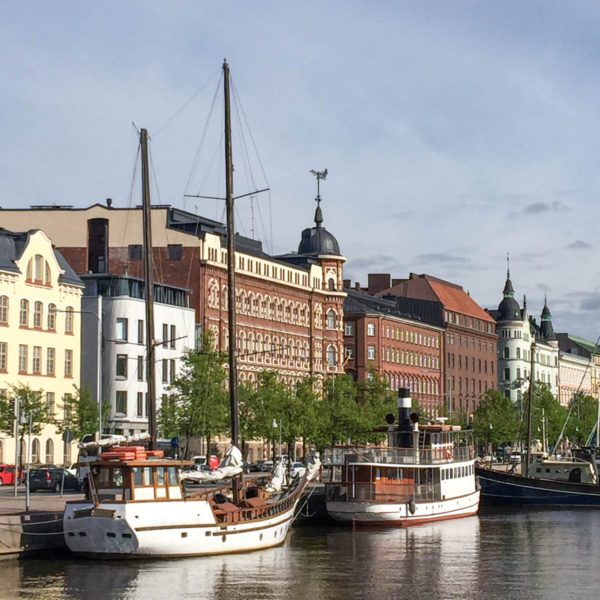 Nokka is a rustic restaurants right beside a beautiful boat filled harbor. The menu has traditional Finnish cuisine, including reindeer, lamb, beef, and lots of fish. 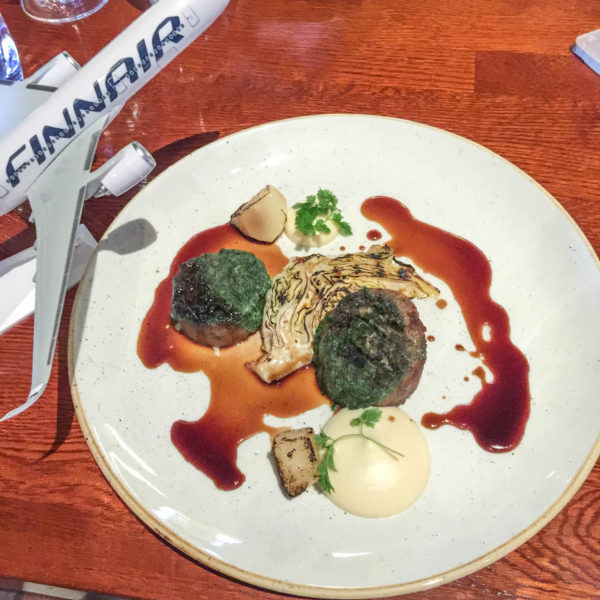 I had the lamb roasted in herb butter with seared spring cabbage and fermented garlic. It was a great introduction to Finnish cuisine which balances hearty fare with fresh produce. 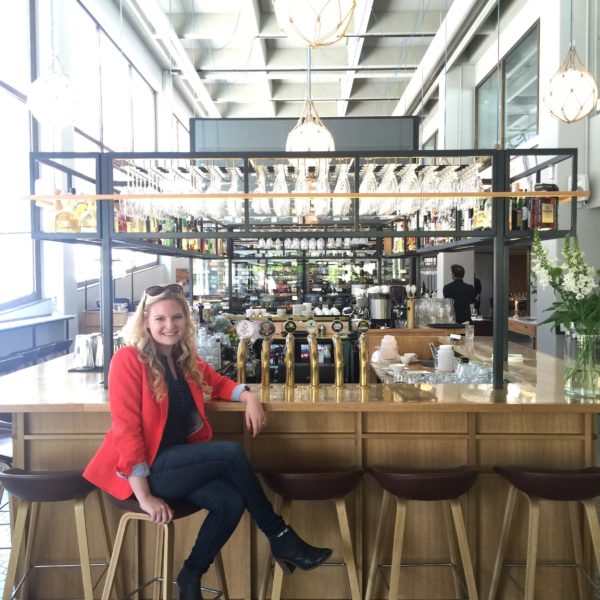 The next day, after exploring Helsinki in the morning we had lunch at Bronda, a beautifully designed restaurant that serves up cuisine inspired by flavors from Spain, Italy, and France. We had a three course lunch, and it was one of my favorite meals of the trip. 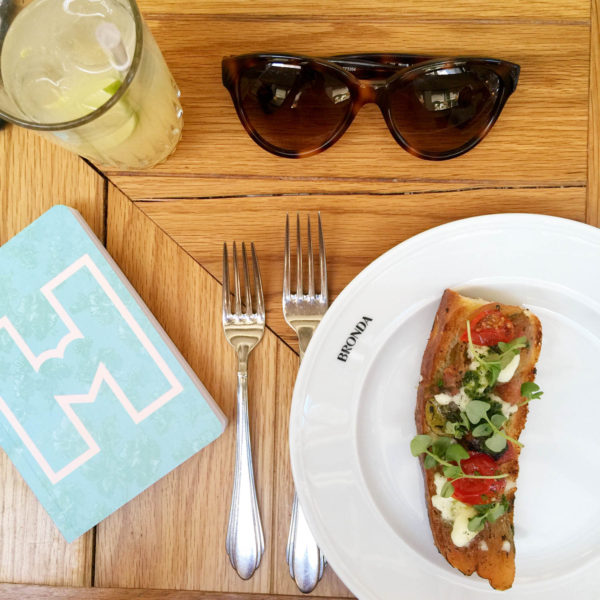 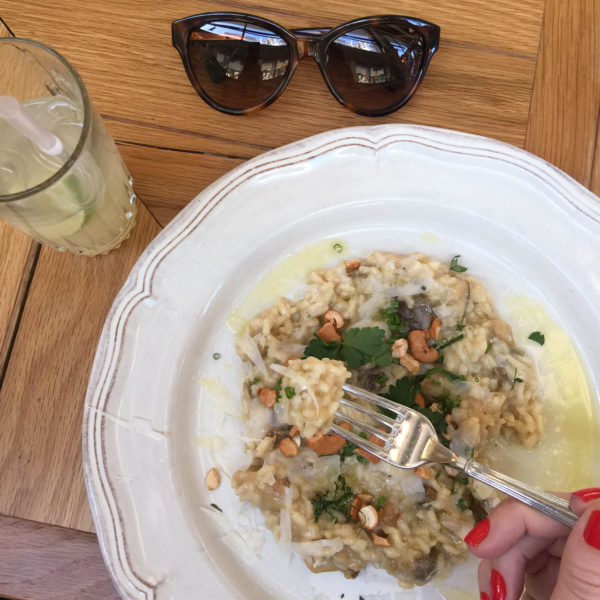 and continued with a delightful porchini mushroom and cashew risotto. 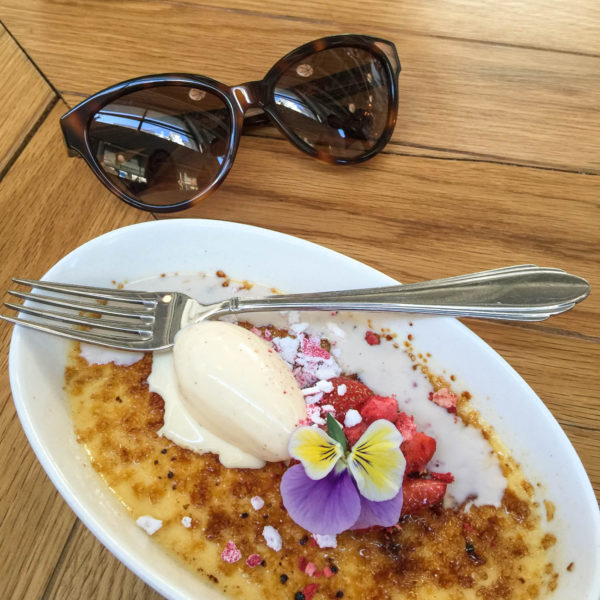 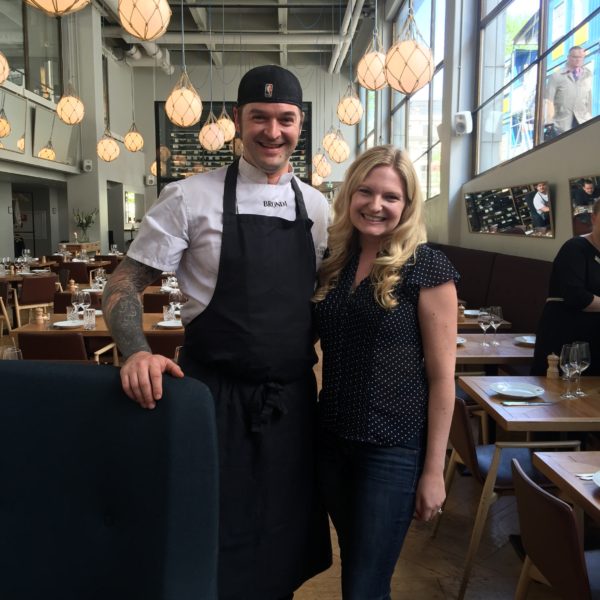 At the end of the meal Chef Richard Sloan came out to meet us and we quickly pieced together that his first job working in the kitchen at a restaurant was at Alisson’s Restaurant in my hometown. It’s such a small world. 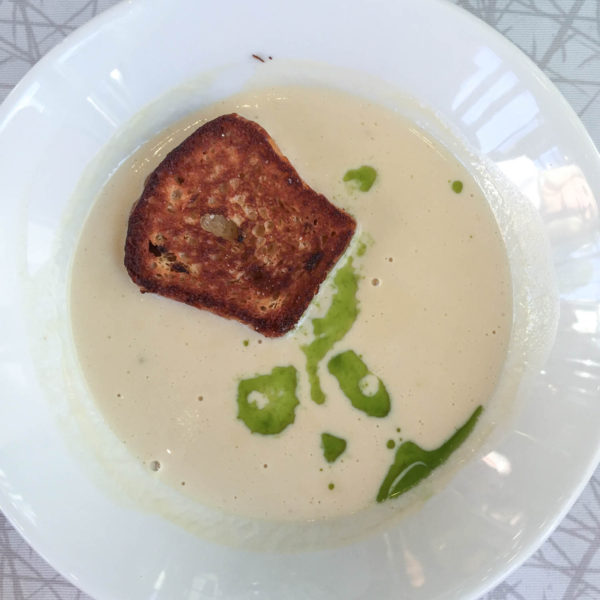 That evening we dined at Kappeli, an elegant restaurant right in Helsinki’s Esplanade, the park in the center of city. It happened to be asparagus week at some of Helsinki’s restaurants, and we ate from Kappeli’s special asparagus menu. First I had a cream of asparagus soup served with toasted brioche, we kept talking about how much we loved this throughout our trip. 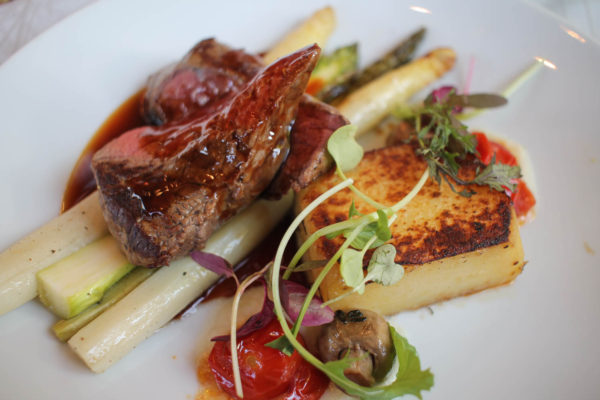 Then I had beef with green and white asparagus and potato. Beef, asparagus, and potatoes were ingredients we saw on menus again and again. 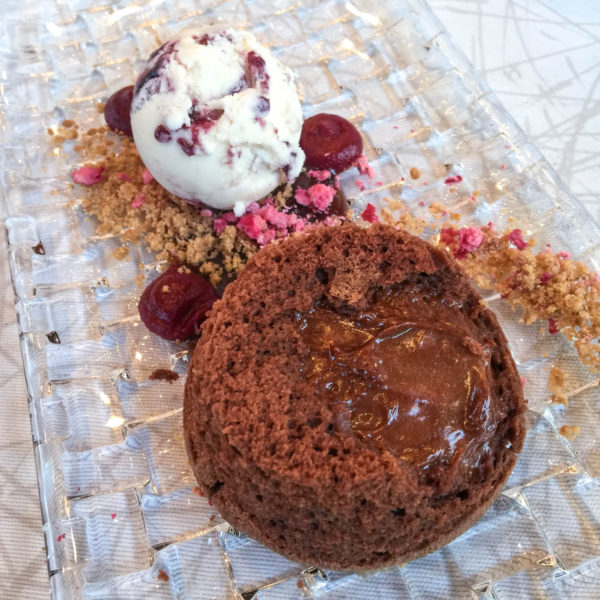 The next day, we went to Olo, one of the most famous restaurants in Helsinki. Later on during the trip, I met Erik Mansikka, the winner of Hell’s Kitchen Finland at a bar in Turku, he was incredibly impressed that we dined at Olo, and praised the restaurant. I took lots of video at Olo, which you can watch below.

At Olo, we dined on an elaborate four-course lunch featuring typical Finnish cuisine. Our meal started with cauliflower soup topped with shaved reindeer heart that was served with fresh sourdough bread for dipping, instead of a spoon. Next came beef tar tar and then lamb. 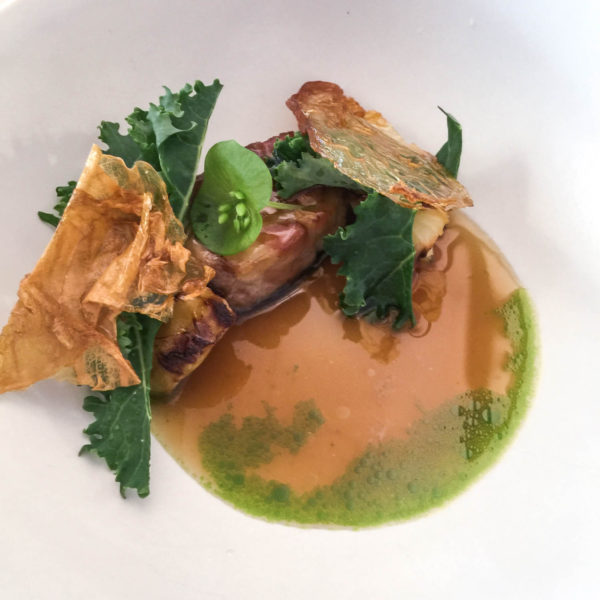 The lamb was the best lamb I have ever tasted, it didn’t have the gamey taste it often has, and was fall apart tender. Artic Char was the third course. Both lamb and artic char are very common foods in Finland.

The dessert was balls of elderberry ice cream coated in white chocolate served in a box with flowers. 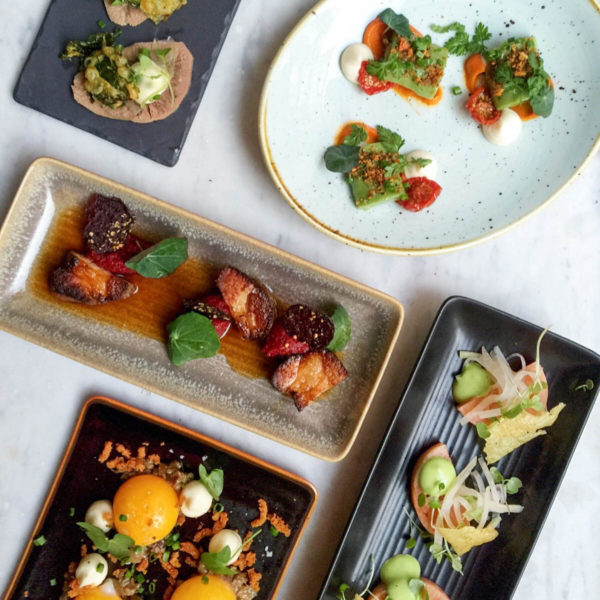 We had dinner at Juuri that night, a restaurant that specializes in small plates of modern cuisine made with traditional Finnish ingredients. We started with a series of small plates including pork neck, sliced beef tongue with crème fraiche, porchini mushrooms with a slow cooked egg yolk, arctic char, and stinging nettles (it’s similar to kale and spinach). 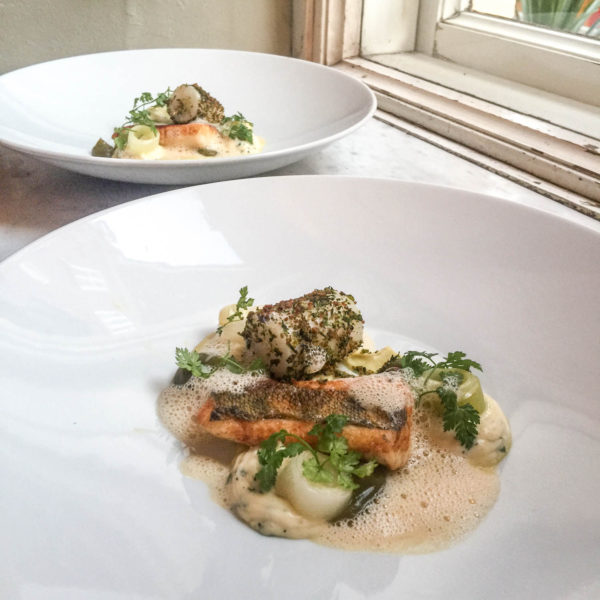 The main course was perch two ways. It was light and flakey, and beautifully presented.

For dessert we had rhubarb ice cream served with almond paste and graham cracker crumbs. It was a bit like a deconstructed tart.

I was so impressed with every single thing we ate in Helsinki. The city has a dynamic and sophisticated culinary scene, and it was a special treat to try so much fresh seafood.

Have you been to Helsinki? Did I miss anything in my guide of where to eat in Helsinki? Let me know in the comments!