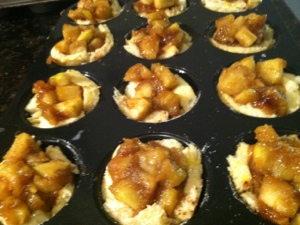 Last night my husband and I prepared Apple Charlotte for our weekly Sunday Night Dinner. Since we were watching the première of Downton together after dinner, we chose to make Apple Charlotte, a dessert mentioned in Season One. This is the dessert that Cora asks Mrs. Patmore to make when Sir Anthony is coming to dinner. Mrs. Patmore refused to make it, because her eyesight was damaged and she couldn’t read the recipe. My friend John accused Charles and I of taking the Downton première a bit to seriously. In addition to the Downton dessert, Charles wore his Union Jack bow tie, and I wore my Union Jack shirt. We considered having Free Bates shirts made, but we decided that was too far. We wore Union Jack outfits because when you marry a Brit you have such things at the ready. 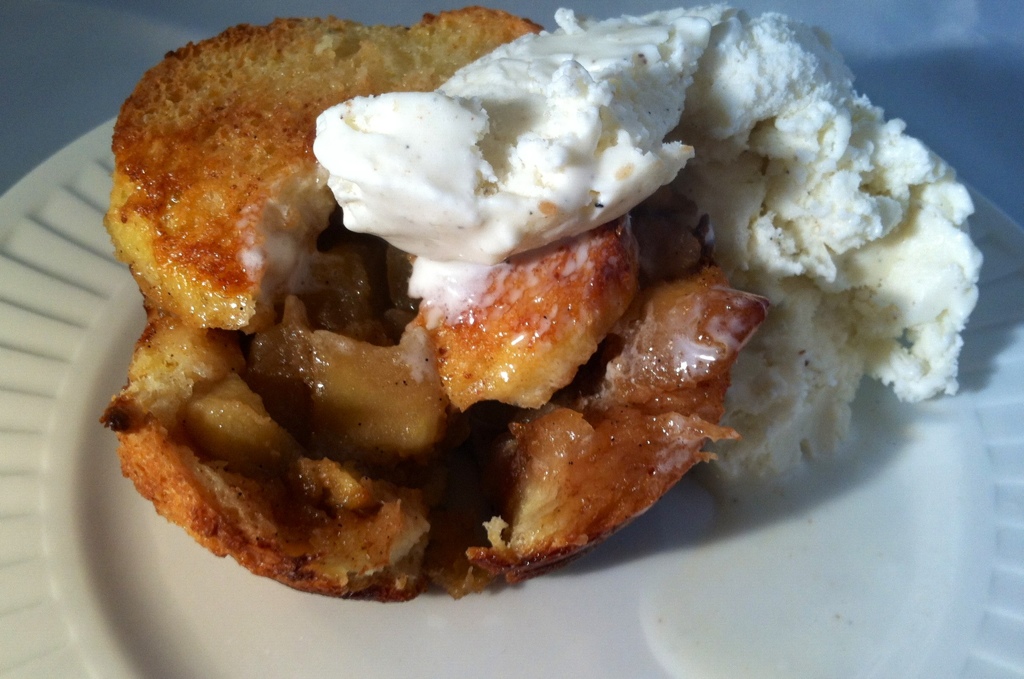 Apple Charlotte is essentially apple pie filling baked inside a French toast crust. It is quite simple to prepare (although somewhat tedious), and can be served with ice cream or custard. I based my recipe off of Tyler Florence’s. Instead of using larger ramekins, I made my Apple Charlotte in a cupcake tray. I needed to make enough to serve 16 people, and after a big dinner I thought a cupcake sized portion would be just the right amount. This worked very well. I was still able to get about 3 heaping tablespoons of the apple filling in each serving. Charles and I prepared everything at home, and then baked the dessert at Caroline’s place after dinner. I often bring uncooked desserts to dinner, and then cook them on the spot so we can enjoy the dessert while it is warm.

My friends and I enjoyed our first Apple Charlotte experience. The crisp French toast crust is a nice contrast to the soft baked apples. The brown sugar and butter create a caramel sauce surrounding the apples. I was glad I chose to serve this with ice cream. It was much easier, and I think a custard would have been too rich. I love the idea of making a french toast cup to hold dessert. I think that this would also work very well for peaches or blueberries.

Charles took these photos and he did a great job!

For the Apple Filling: 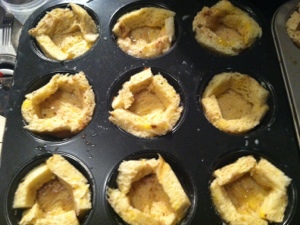 Apple Charlotte: Use the battered bread to fill the cupcake tray creating cups to hold the apple filling.

Peel and dice your apples. Then in a large sauté pan, melt the butter. Add the apples, lemon, and sugar. Then cut the vanilla bean in half, scrape out the inside, and add it to the pan along with the entire vanilla bean. Stir everything together and cook on medium low for about 20 minutes, until the apples are soft. 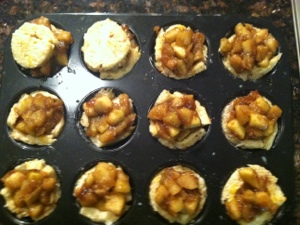 Apple Charlotte: Fill each cup with the apple filling. Then add a top to the cup. Press it down into place. Top with sugar. 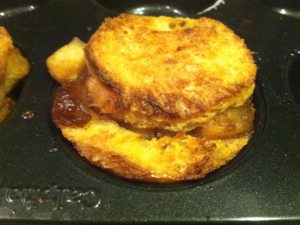 Apple Charlotte: Bake for 25 minutes at 350 degrees. You can overfill the cups.

While the apples are cooking, cut the bread into slices. Find a cup or cookie cutter that will cut circles that will fit inside the cupcake tray. Once the bread is sliced, cut 32 circles, try not to include any crust. Then cut the remaining slices of bread into thin strips (without crust) that can be used to create the walls of the cup. Since the bread gets dunked in a batter, the different pieces of bread will bake together, it doesn’t have to be perfect when you are piecing it together.

Preheat the oven to 350 degrees. Grease the cupcake tins with butter, and then coat the butter with a big of sugar. This will help the french toast cups crisp up, and it will help get them out of the cupcake tray.

Mix the batter. Whisk together all the batter ingredients.

Dunk 16 of the circular pieces of bread in the batter, and place them in the bottom of the cupcake tray. Then dunk the thin strips of bread and use them to create walls of the french toast cups. (See the photos for a visual of this).

Scoop a generous amount of the filling into each french toast cup. The cups can be overflowing, they will hold together and won’t create a huge mess as they bake.

Dunk the 16 remaining bread circles in the batter. Place them on top of the apple filling. Press down so they will stay in place. Sprinkle the top with sugar.

Bake for 20-25 minutes, until browned. Your house will smell amazing. Then serve with ice cream.