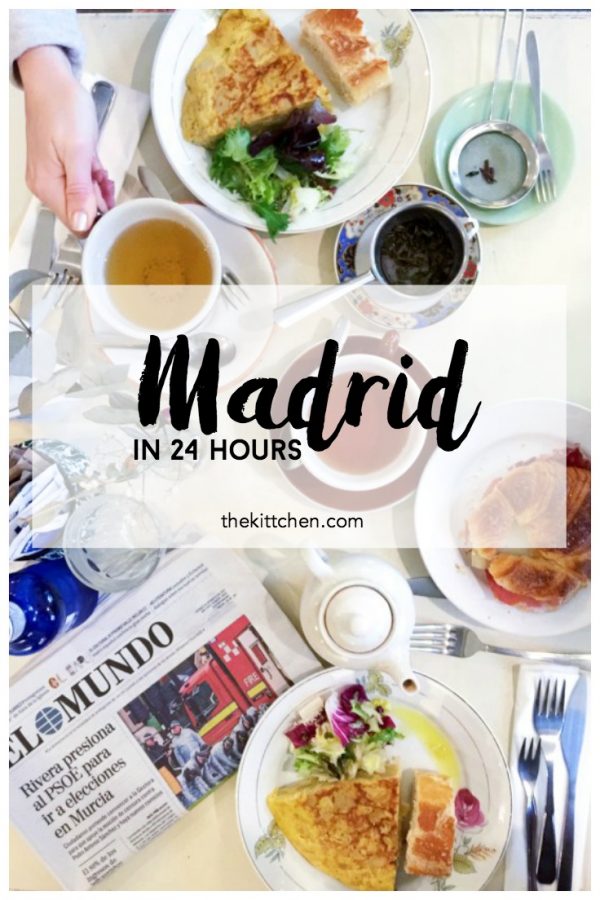 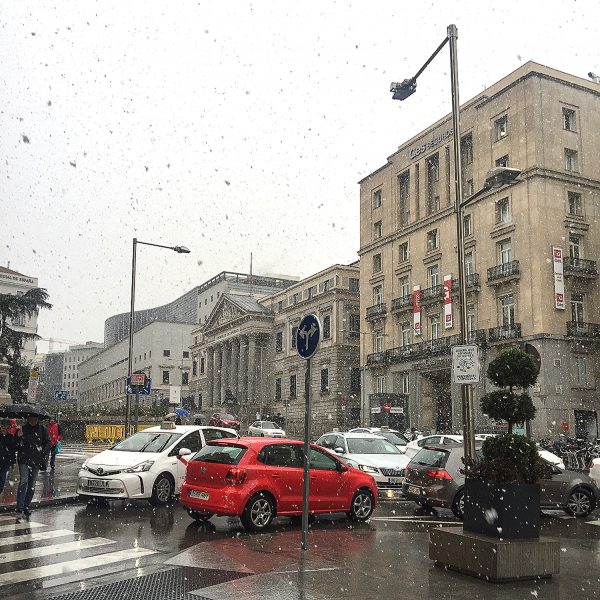 In March I spent 24 hours in Madrid with my Mom and sister in our way to Morocco. And the craziest thing happened. It was March 23rd and it snowed. Not just a little either. It didn’t accumulate, but the biggest snowflakes I have ever seen (and that’s saying something) fell for about 2 hours! And it rarely snows in Madrid. Despite the snow, we tried to make the most of our brief stay in Spain’s capital. 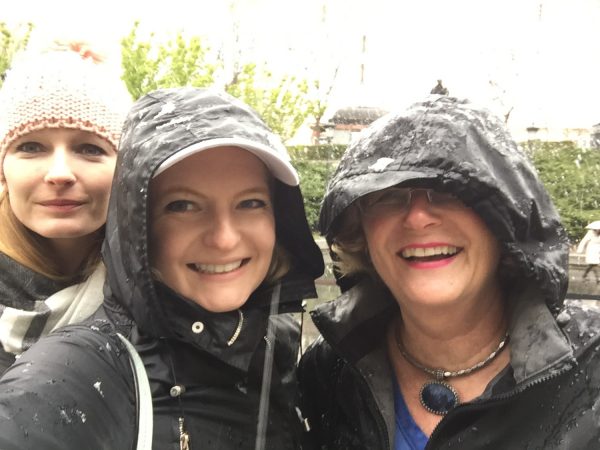 You might be curious as to why I spent only 24 hours in Madrid. My sister Kelly found that it would be significantly less expensive to fly through Madrid on her way to Morocco. So that is where we met to begin our journey, and since Kelly and my Mom hadn’t been to Madrid before, they wanted to stay for a night. 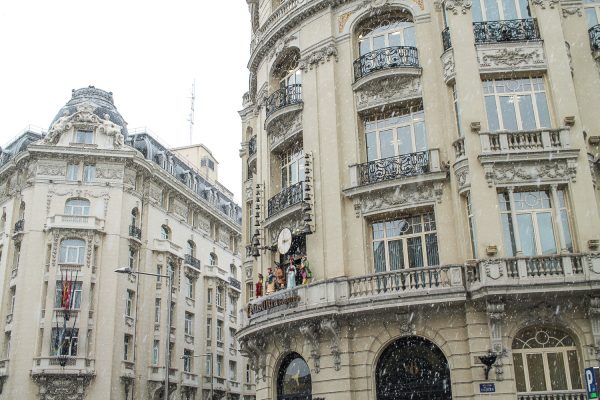 Kelly booked us a room at the Westin Palace and we loved it. The hotel was grand and luxurious and very well located. It was a bummer that WiFi and breakfast weren’t included though – this is my biggest pet peeve when it comes to hotels.

Since it was cold and snowing, we went to Museo del Prado. It’s considered one of the best museums in the world. Unlike the big museums in America like the Met, the MFA Boston, and the Art Institute of Chicago, the Prado doesn’t house any modern art. Instead, it is home to Spain’s historically significant works. This is where you will find paintings by Velasquez and Goya. Velasquez’s famed Las Meninas is the centerpiece of the collection. If you happen to be heading to Barcelona I recommend a trip to the Picasso Museum to see Picasso’s series of paintings inspired by Las Meninas. 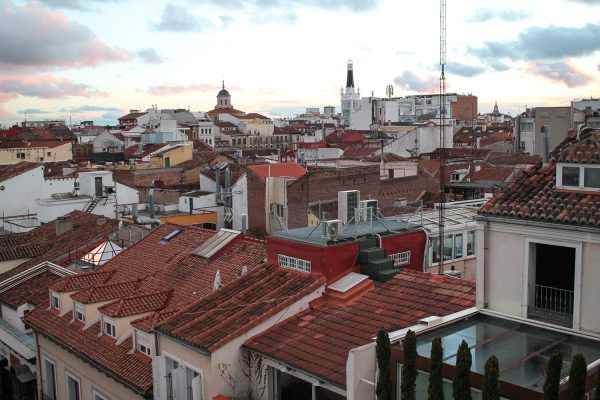 The snow stopped by the evening, and Kelly and I wanted to find a rooftop where we could get some shots of the sunset. 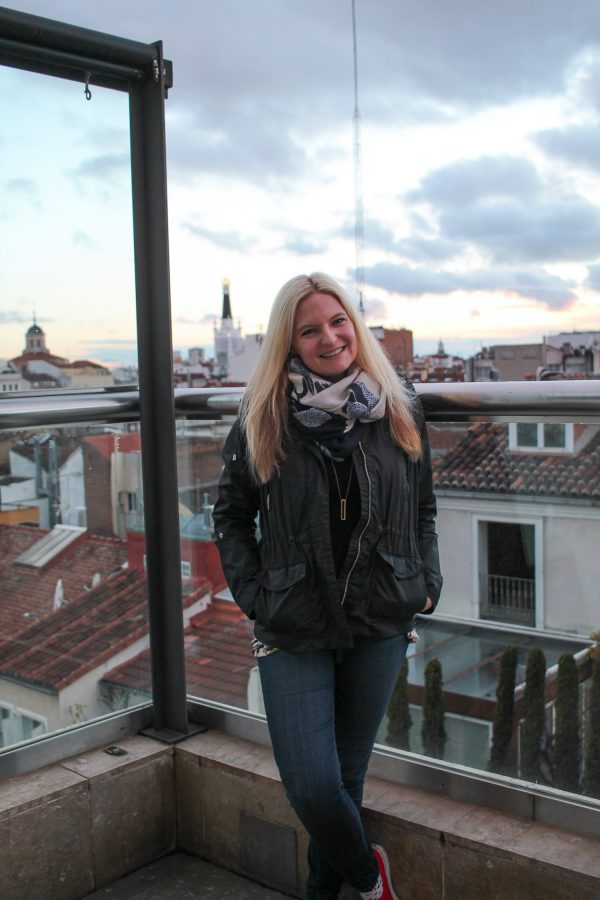 We walked over to Urban Hotel which has a rooftop bar. Obviously, it was closed, but the staff very kindly let us up so that we could get some photos. 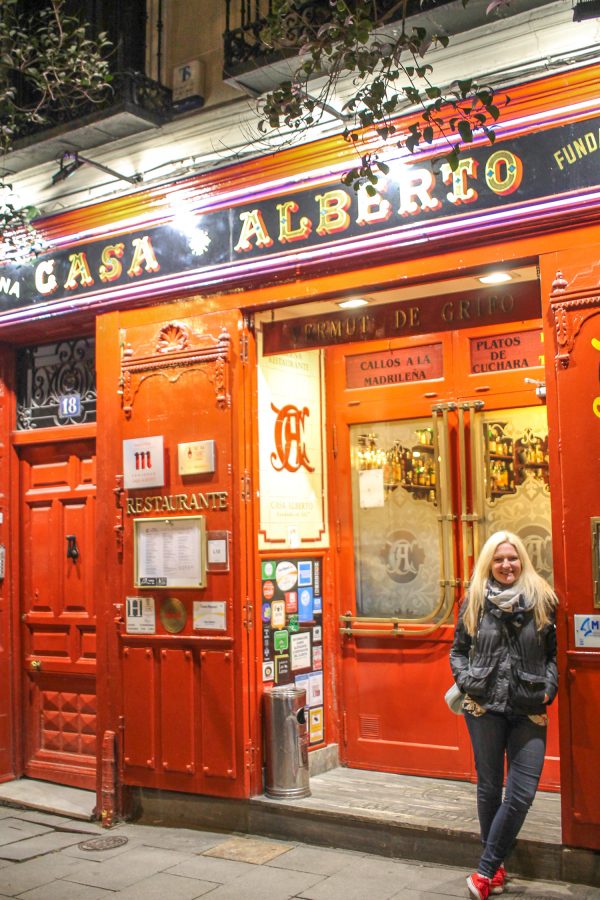 With only 24 hours in Madrid, we wanted to make sure we went somewhere wonderful for dinner. I told Kelly to check Foodiehub for a recommendation. Unlike other review websites where you have to weed through options to find something good, FoodieHub has local experts in cities all over the world who share curated lists of restaurants. (I’m their Chicago expert). Kelly found Casa Alberto which was described as the restaurant to visit if you only have one night in Madrid. It did not disappoint. 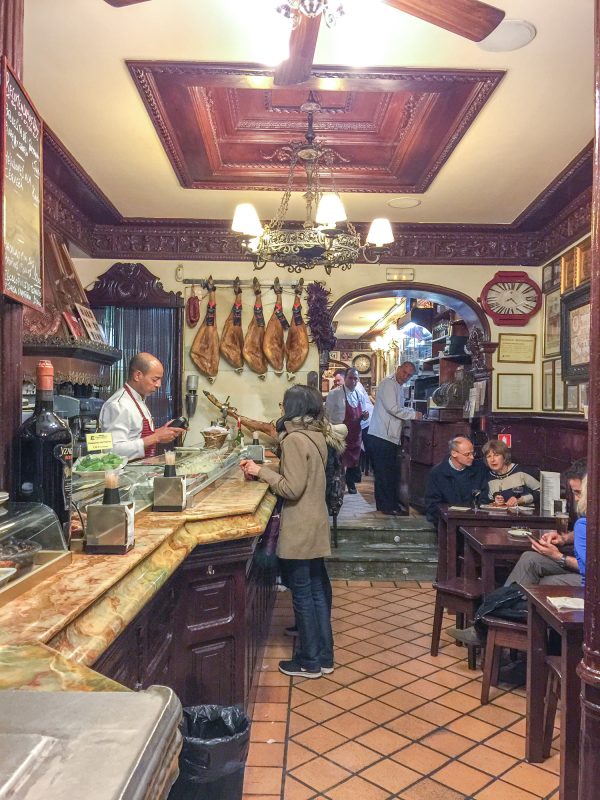 The little restaurant in a building painting bright red is on a small side street and you could easily walk right by and miss it. We knew we were in the right place when we were the only tourists there. 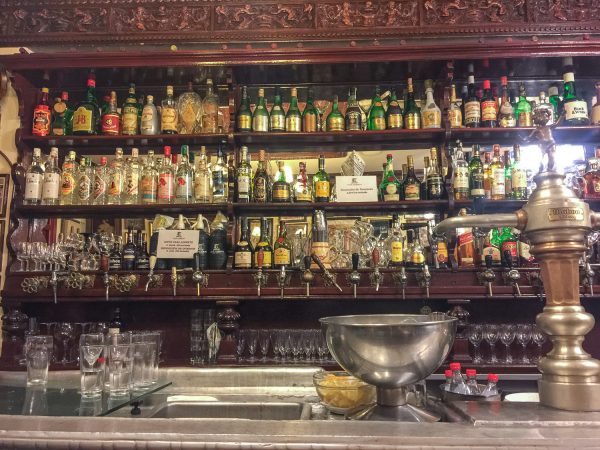 The restaurant has two parts, a small casual bar and a more formal area in the back with white tablecloths. FoodieHub specifically recommended sitting in the bar to order tapas. 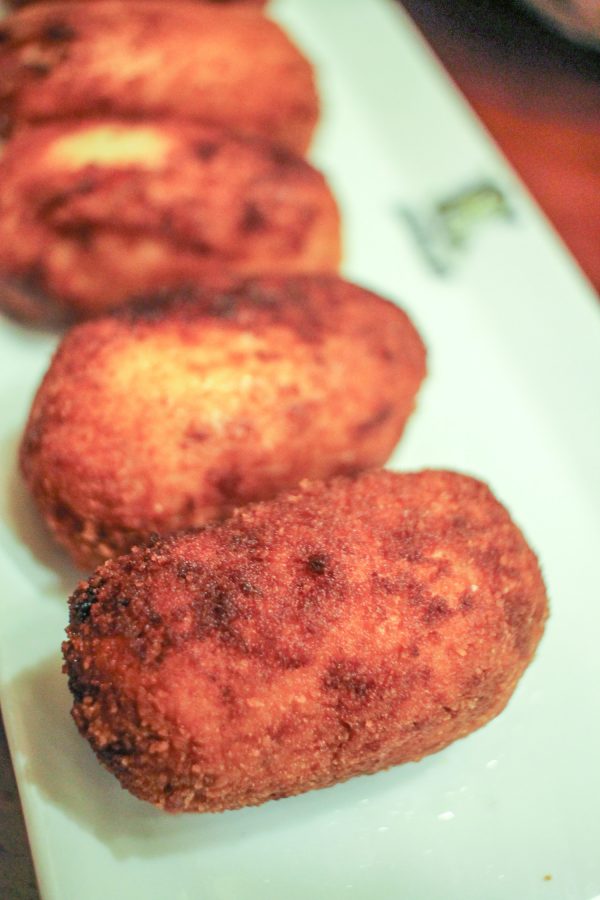 We ordered 6 tapas and it was almost too much, but we loved everything. The ham and cheese croquettes were outstanding, probably the best I will ever have. 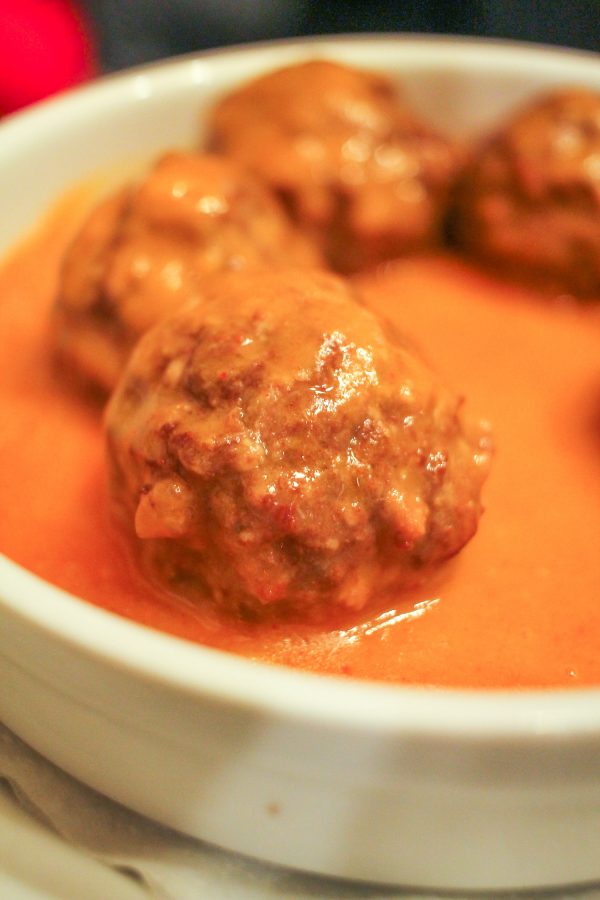 We also loved the veal meatballs which came in a light tomato sauce.

We absolutely loved Casa de Alberto. The waiters were charming and welcoming, the food was exceptional, and the final bill was only $70 for the three of us (including a lovely bottle of Rioja). 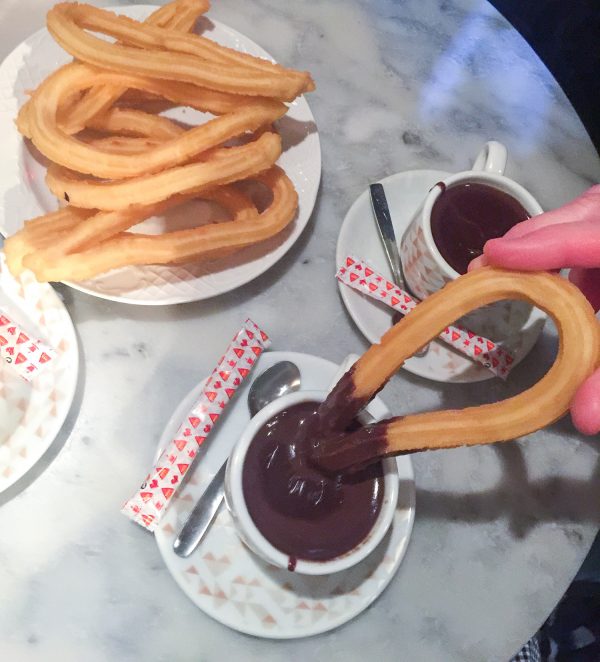 After dinner, we stopped at a small cafe called Cafe del Principle for a treat of churros and hot chocolate. It was the ideal way to warm up – because I wasn’t at all prepared for the freakishly chilly weather – it had been 70 degrees the week prior. The hot chocolate was dark and extra thick – similar to the hot chocolate in Italy. Make a point to try some. 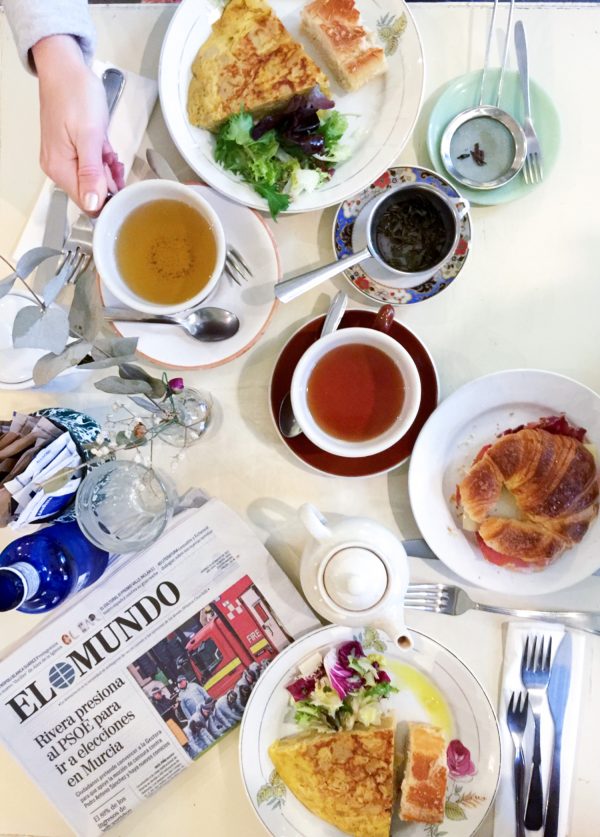 We didn’t have much time the next day before we had to head to the airport but we made our way to a small cafe called Cafe Matilda. We had pastries and Spanish omelets.

Then we quickly walked around the neighborhood to explore before heading to the airport and continuing on to Marrakech.

Have you been to Madrid? Do you have any recommendations? Share them in the comments!