A guide of what to do in Mostar, Bosnia. This tiny village is filled with culture and charm. 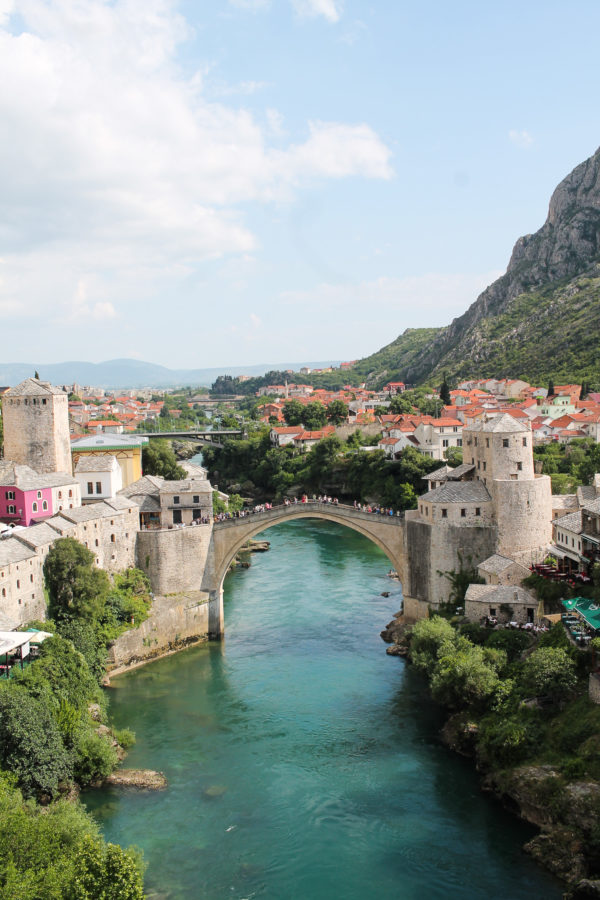 Mostar is a small historic city and UNESCO World Heritage site conveniently located between Sarajevo and Dubrovnik. The old town of the city is so beautiful that it looks like it was lifted from a fairy tale and brought to life.

How to get to Mostar

While you could opt to take a day tour from Sarajevo to Dubrovnik, I think it’s best to spend a night or two in Mostar. There are two big benefits to staying in Mostar. First, accommodations are less expensive than both Sarajevo and Dubrovnik. Secondly, you can avoid the masses of people taking a bus tour. Bus tours to Mostar are available from both Sarajevo and Dubrovnik, with lots of people on cruise boats opting to take day tours to Mostar and the nearby Kravice Falls. If you stay in Mostar, you can enjoy the city before and after the crowds leave. During the day the streets are packed with tourists from bus tours who arrive around 11 and leave at 5.

What to do in Mostar, Bosnia 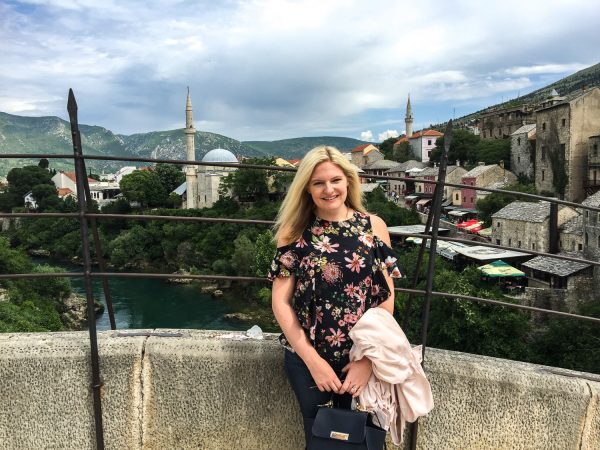 I woke up, had breakfast, and walked around Mostar for a couple of hours in the morning. The streets were nearly deserted. 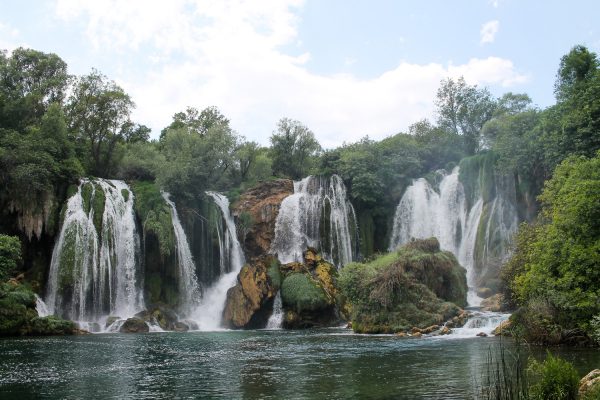 Once the crowds arrived, I took a taxi to Kravice Falls. This worked out wonderfully. 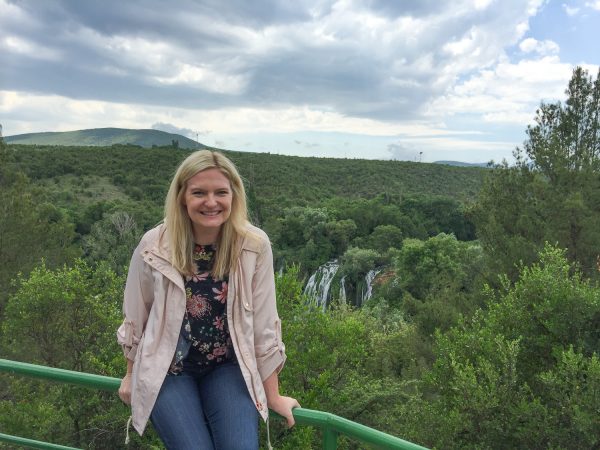 Since the buses had left the falls and moved on to Mostar’s Old Town, there were only a handful of people at the waterfalls. 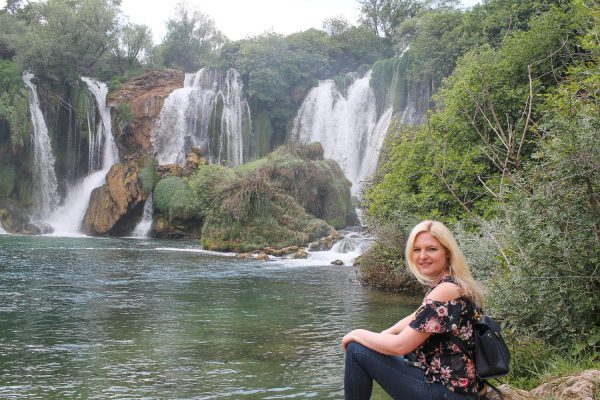 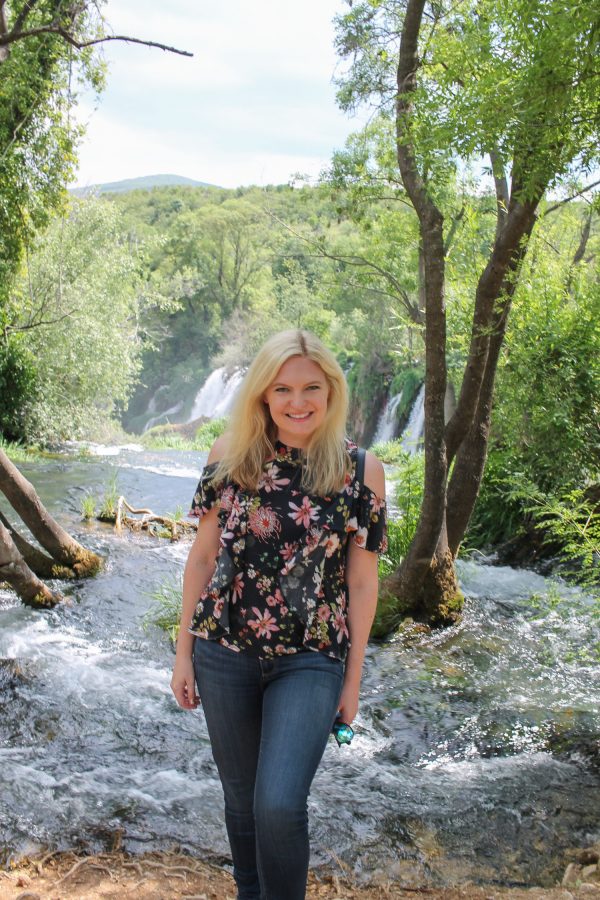 The falls are incredibly beautiful, and you can opt to go swimming if you don’t mind the cold water. I paid $75 for the taxi driver to take me to see Kravice Falls. He spoke English very well and was excited to show me around. Our excursion lasted 3 hours. He even took these photos of me! 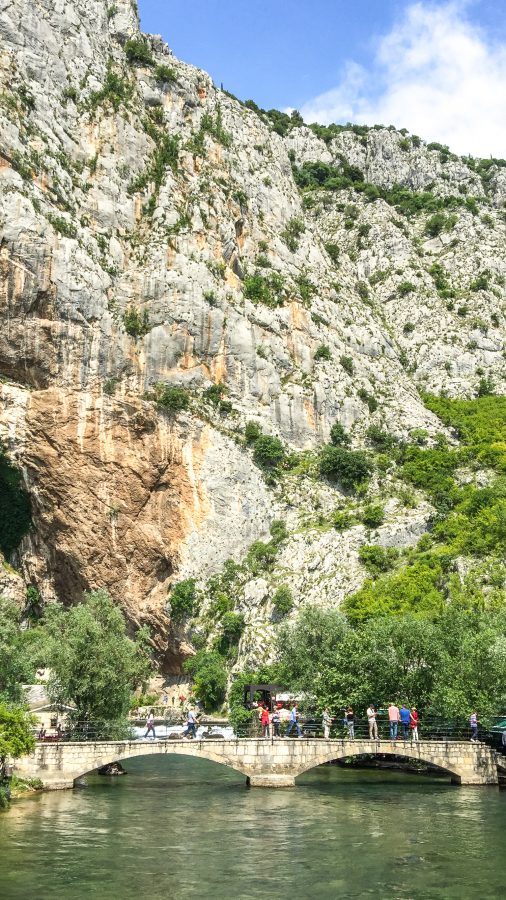 After Kravice Falls we stopped in Blagaj, a beautiful little town beside a river. 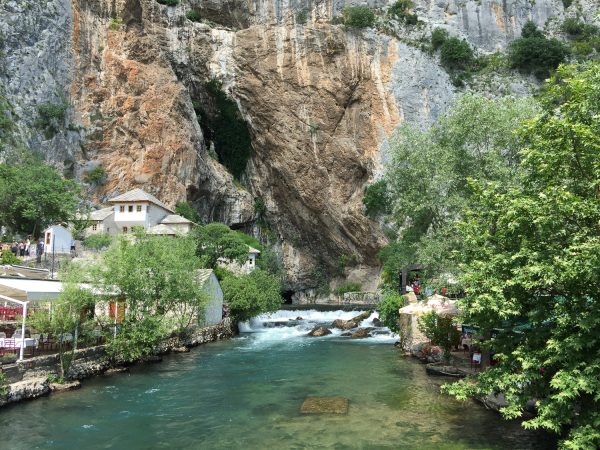 It’s a common stop between Mostar and Kravice Waterfalls. There isn’t much to do there, but it’s nice to stop and take some photos. There is a monastery (it’s the white building on the left) that some people choose to tour. 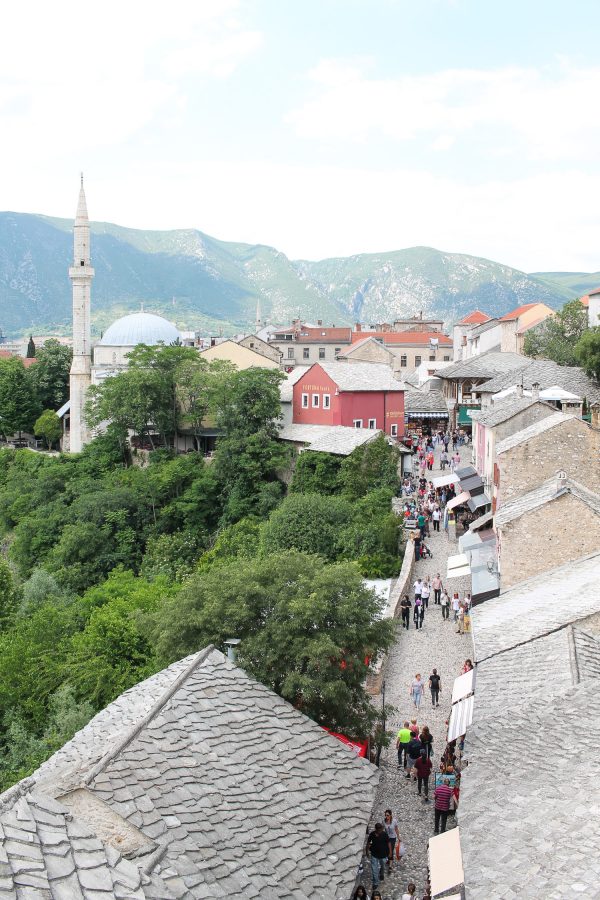 Visit the Mosque and climb to the top

When I returned to Mostar the city was starting to clear out, and I made a visit to the mosque and climbed to the top of the minaret which has a stunning view of the city. 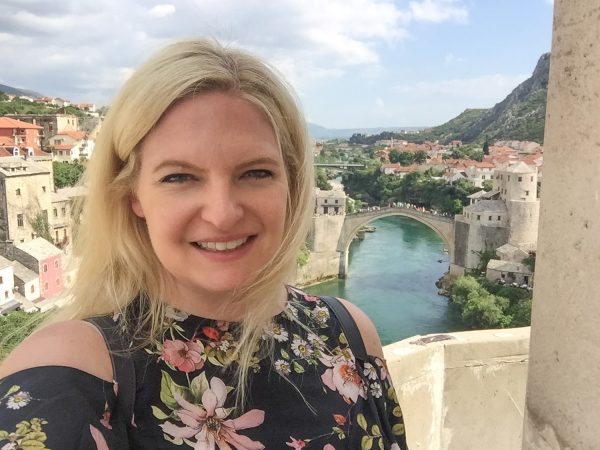 The stairs to the top of minaret are steep, narrow, and challenging. It was completely empty when I was there. I was a bit out of breath by the time I had climbed to the top, but the view was worth the climb. 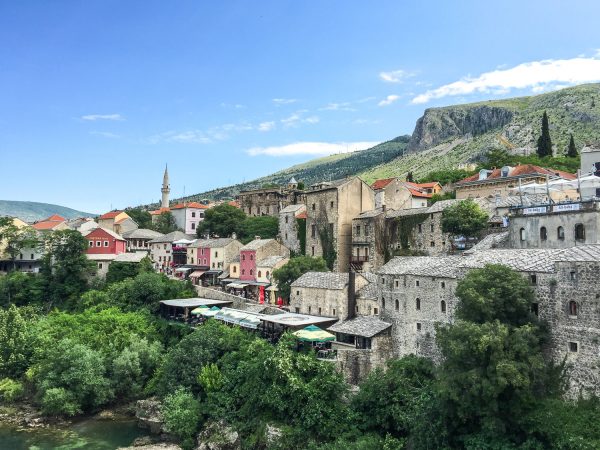 I only encountered 3 other Americans in Mostar. Most Americans have never heard of the city, which is a shame because it was simply magical. There isn’t a whole lot to do, but that is part of the charm. Sip coffee or beer and enjoy the view, people watch, indulge in eating Bosnian sausages with fresh pita bread and cheese. Get an ice cream cone – they are only $1. Watch the sunset. And end your day at Black Dog Pub, the liveliest little bar in the city and a great place to chat with other travelers. 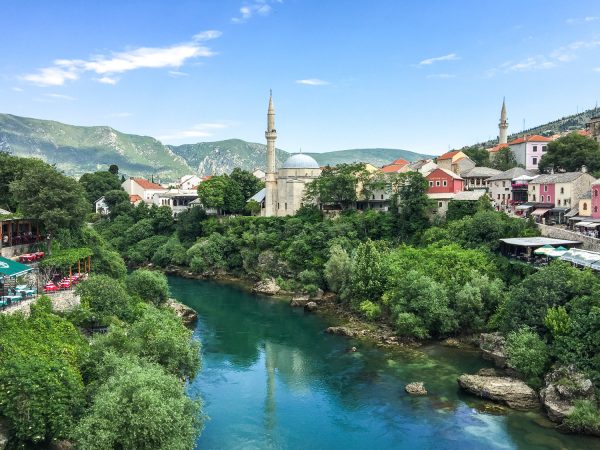 Where to stay in Mostar

I stayed at Hotel Milas, it is just outside Mostar’s Old Town. It is a new hotel that costs only $65 a night. The cost is just a little less than a hotel in Sarajevo, but significantly less than a hotel in Dubrovnik where we spent about $250 a night. Doesn’t spending $65 for a hotel and $75 for a private excursion sound more appealing than spending $250 for a hotel in Dubrovnik and then spending $60 a person for a tour to Mostar that involves about 5 hours of driving in one day? 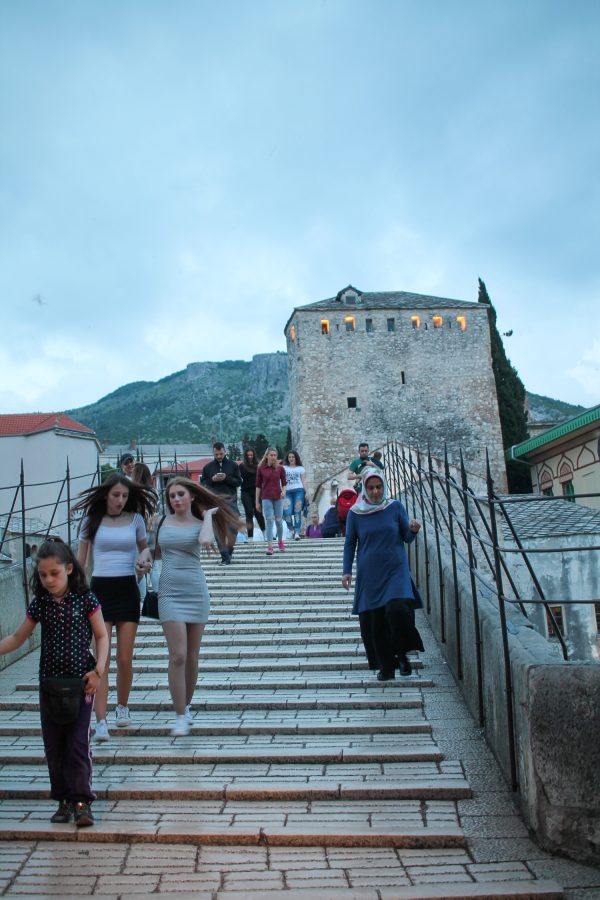 What to know before you go to Mostar

I have some important notes on Mostar. It would be a nightmare with a stroller. The streets are made up of uneven rocks that are more difficult than cobblestones. And the bridge has edges to help people with their footing. Families resort to carrying their children and the stroller and it didn’t look fun. 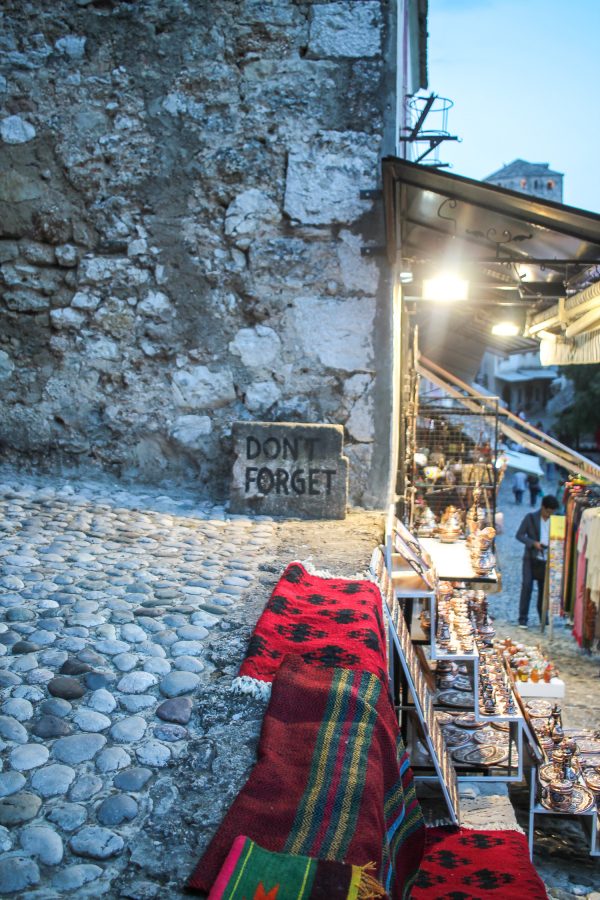 Make sure you wear sneakers. You want something that is easy on your feet because the streets are tough on your feet. Flip flops and heels of any kind are a bad idea. 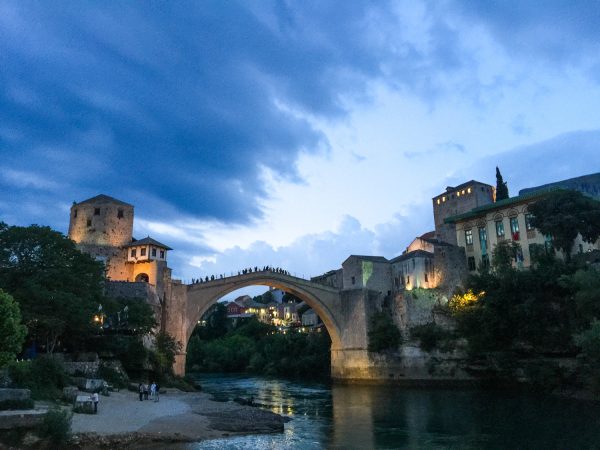 I only discovered Mostar after doing a deep dive on the internet while planning travel between Sarajevo and Dubrovnik. I am so glad that I went. I realize that Bosnia isn’t a popular travel destination for Americans, which is really a shame because it is probably the most affordable country in Europe that I have visited (for reference, it’s less expensive than the Czech Republic) and it has natural beauty and a deep history to explore.

How to get to Mostar

I took a bus from Sarajevo to Mostar. I had hoped to take the train, but it was under repair. The bus took about 2 ½ hours and was one of the most scenic bus rides I have taken in my life. From Mostar, I went on to Dubrovnik by bus. This took just under 3 hours. The journey involves entering Croatia, going through customs, re-entering Bosnia, going through customs, and then re-entering Croatia and going through customs a third time. I took a 7 am bus to avoid crowds at the customs checkpoints, if you leave later in the day or travel on a weekend the border crossings can make the journey longer.

Have any of you been to Bosnia or Mostar? Aren’t these photos making you want to pack your bags and leave right now?

Want to save this guide of What to in Mostar, Bosnia for later? Here is an image for you to pin: 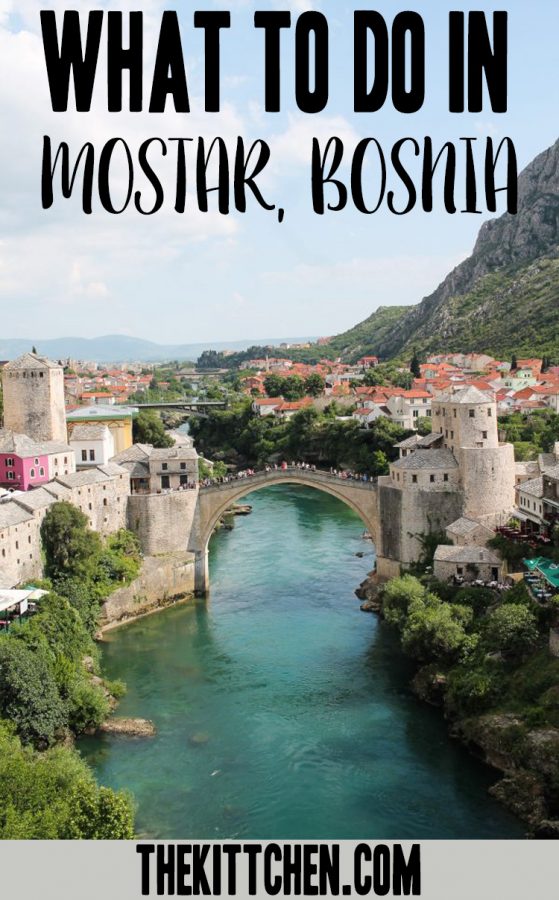