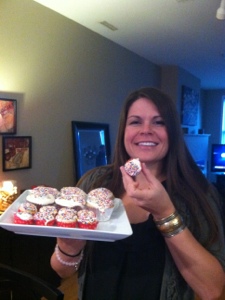 This past Saturday we had another September birthday celebration. My lovely friends Andrea and Jenn both turned 30 which meant that we needed to have a big party! It turned into wonderful weekend long event. It was so great getting to see Andrea’s parents – her mom Fay is this blog’s biggest fan, and her brother and cousins. Plus Jenn’s mom Bonnie, who is super nice joined us Saturday night.  It was a fun yet exhausting weekend!

On Friday night about 20 of us met up at my favorite pizza place, Piece. With such a big group we got to try 5 different pizzas. My favorites were white pizza with tomato, basil, and bacon, and the white pizza with mashed potato and jalapeño. You can build your own pizza and get as creative as you want. Pizza, pitchers of beer, and some of my favorite people made for a great night! 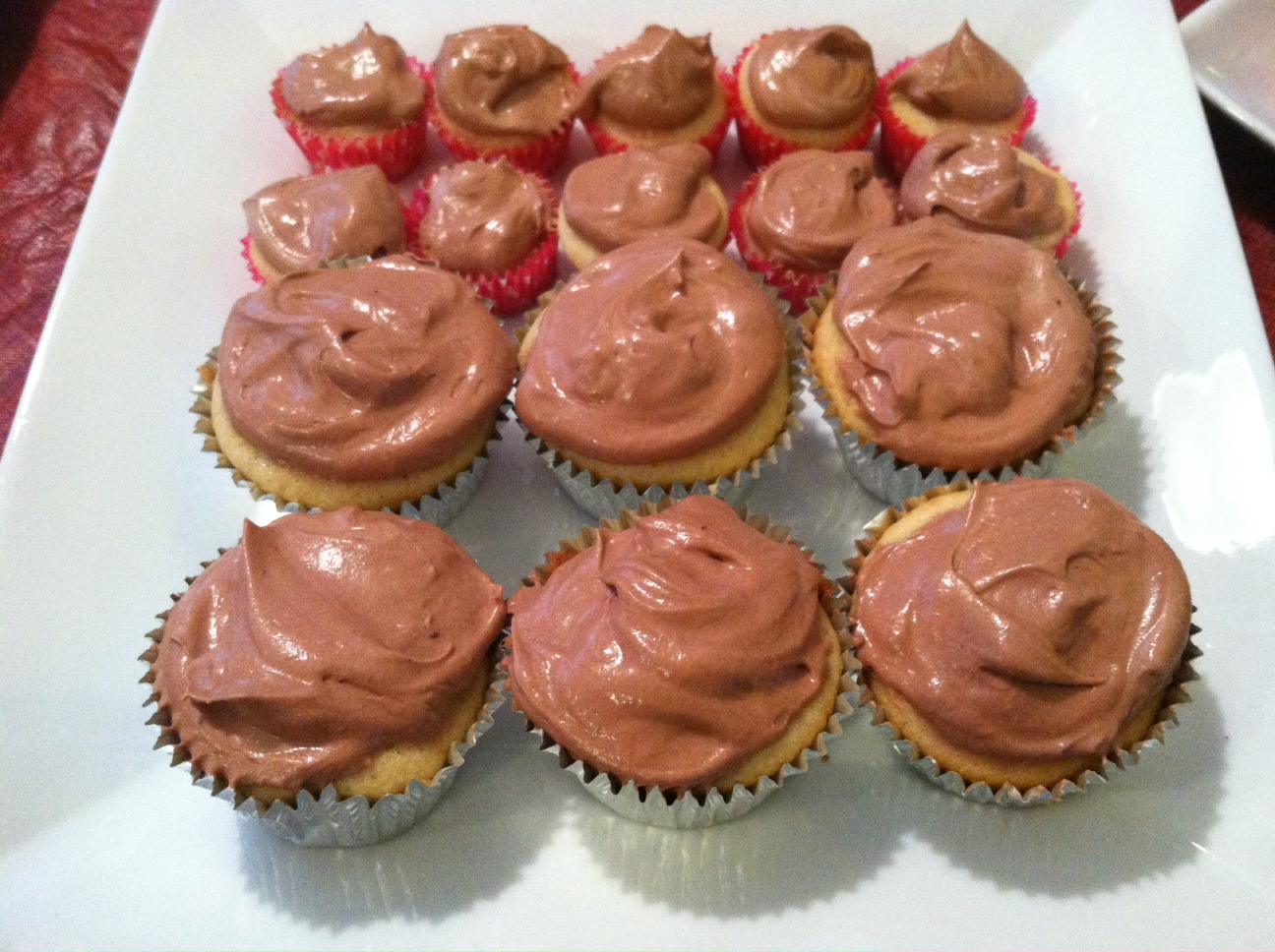 Saturday was super busy because I promised to make cakes for the big party. My friend Caroline hosted at her place and she did a great job as always. I helped out by bringing snacks and cake. The party started at 6, and our party trolley was coming at 7 to pick us up, so our goal was to eat a bunch before the trolley took off. I brough artichoke dip, and Andrea’s Vanilla Cupcakes, and Jenn’s Chocolate Turtle Cake. When Caroline called her mom, Malley, to tell her about the party Malley said that I was clutch for being such a help. This definitely made my day! My friends Moms are the best (my Mom is the best too). 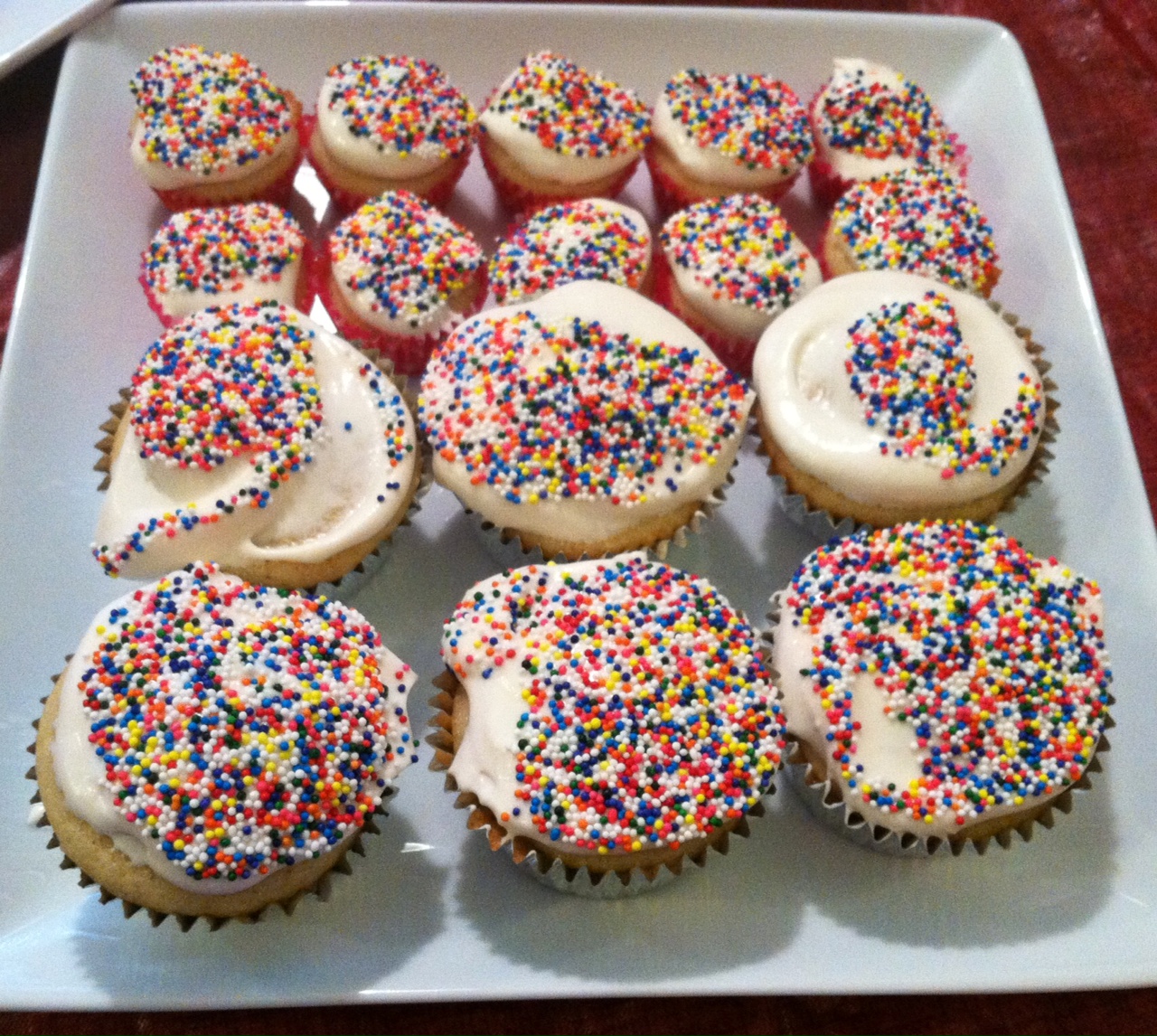 Saturday night was a blast. Trolley parties are so much fun. We basically load up a trolley with 30 friends and a few cases of beer and cruise around Chicago blasting music. We do it about once a year and it is always one of my favorite weekends of the year.

That’s enough about my weekend. Let’s talk about cupcakes. Andrea lucked out this year and she got birthday cake from me twice this year. First I made this cake for Sunday Night Dinner on her birthday eve. Then I made the cupcakes for Saturday because that was the official celebration. I used two different recipes for the cakes and frostings, and it seems that this variation was the more popular because it was a little lighter. I decided to make cupcakes the second time around because the non-pariels Andrea likes are difficult to put on a cake; it was much easier to dip cupcakes into a bowl of non-pariels.

Step 1:
Preheat the oven to 350 degrees.  Line the cupcake tin with cupcake liners.  Stir the flour, baking powder, and salt together in a medium bowl.

Step 2:
In a large bowl with an electric mixer, combine the eggs and sugar.  Mix for about 2 minutes until the eggs are light and foamy.  As you are mixing, slowly add the butter and then the vanilla.  Be careful to heat the butter until it is just melted, you do not want to overheat the butter, or you might accidentally scramble your eggs.

Step 4:
Fill the cupcake tins until they are 2/3 full. Bake for 30 minutes or until fully cooked.  This can be tested by inserting a toothpick in the center of a cupcake, when they are fully cooked the toothpick will come out clean.

Combine the whipping cream, sugar, salt, and vanilla.  Beat with a mixer until stiff.

Set half the vanilla frosting aside. Add the cocoa to the other half and mix until fully incorporated.