Sweet Potato Noodles are a flavorful alternative to traditional pasta, and they can be cooked right in the sauce. The result is a meal that it low on preparation time and low on mess. 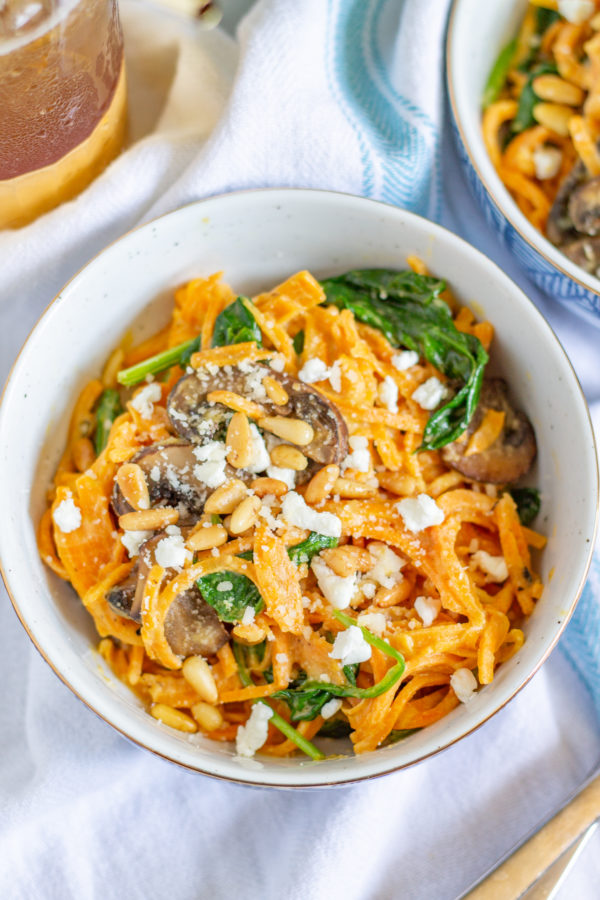 This recipe brings together tender sweet potato noodles, a creamy goat cheese sauce, sautéed mushrooms, spinach, and toasted pine nuts. It is a combination of flavors that works wonderfully, and I love that this meal incorporates so many vegetables. This is one of those recipes that embraces fall flavors. When I was testing this recipe I couldn’t stop eating it. 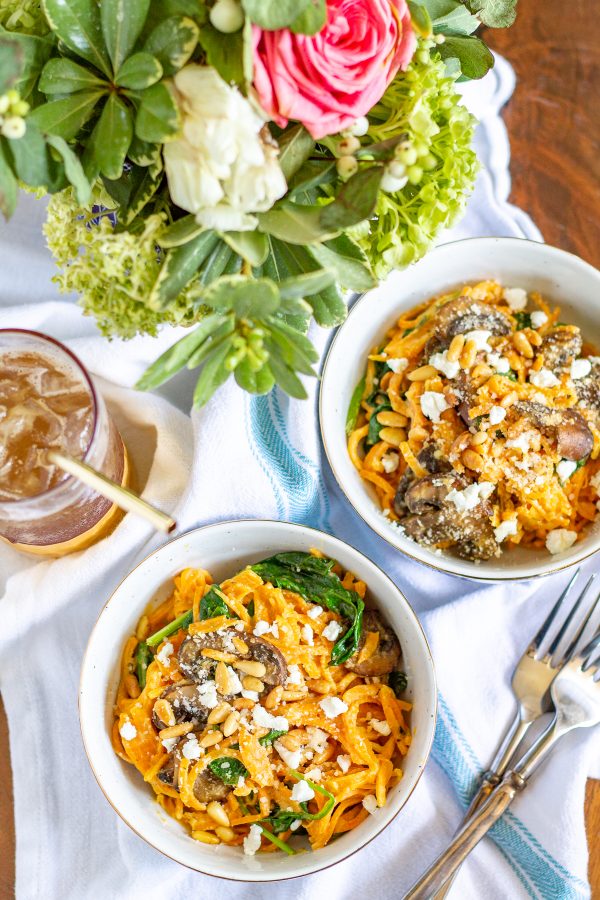 To prepare this meal, first you want to sauté the mushrooms. Set them aside, rinse your skillet, and then make the goat cheese sauce. The sweet potato noodles get added to the sauce and take about 6 minutes to cook. During that time, stir the noodles frequently, and also toast some pine nuts in a touch of butter. As soon as the noodles are almost ready, add the mushrooms and a handful of spinach and let cook for another minute. Serve the noodles with some crumbled goat cheese, parmesan, and toasted pine nuts on top. 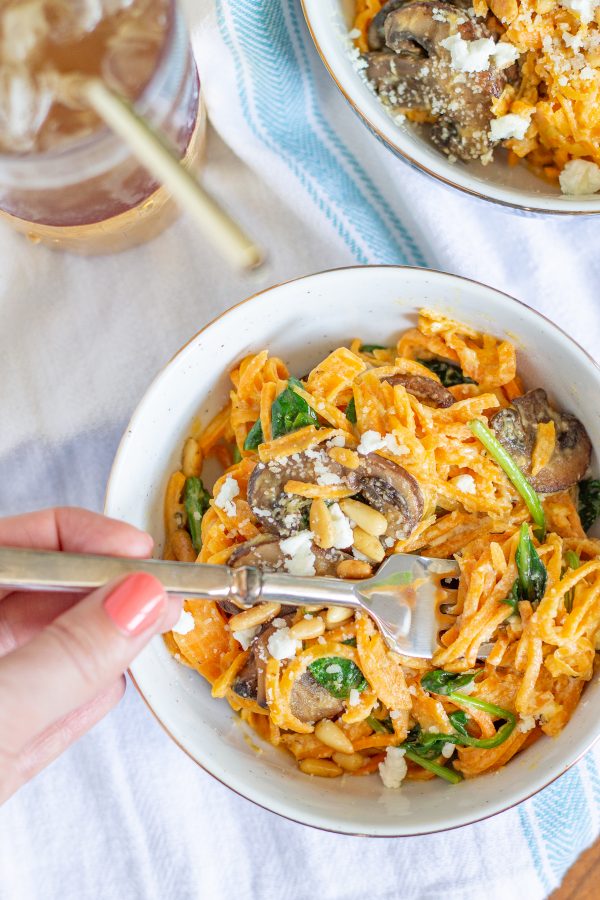 I do own a spiralizer. I will be honest and admit that I only use it about a few times a year. Instead of investing in a spiralizer you might want to buy ready-to-cook spiralized sweet potatoes at Whole Foods or Trader Joes. If you do have a spiralizer and you want to spiralize the potato yourself, my recommendation is to get a long round potato because it will work best. 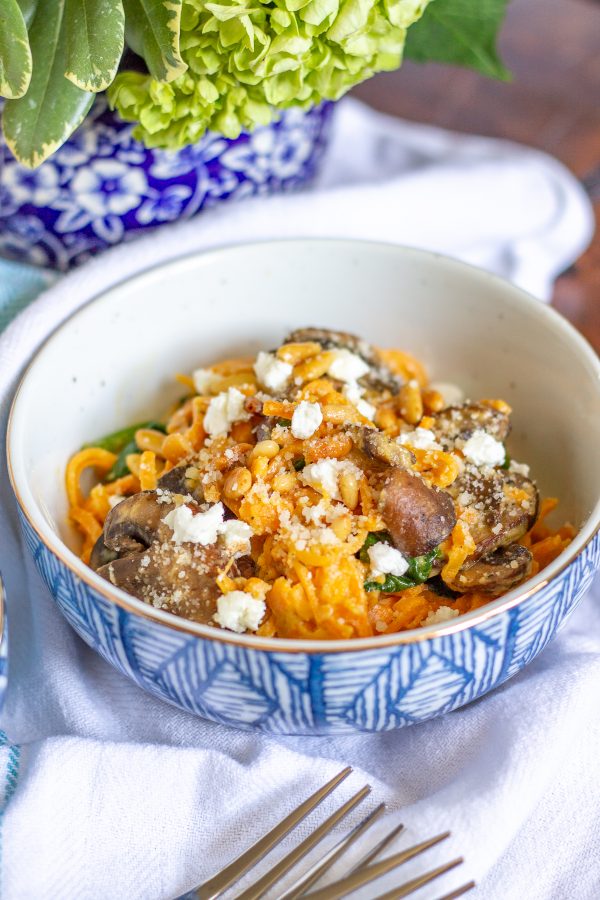 You need to know that the goat cheese sauce will go through a few phases. First the sauce will be pretty thick. Once you add the sweet potato noodles, they will start to loose their moisture and make the sauce runny. That is ok. Stick with it. Frequently stir the noodles and let them cook for about 6 minutes. As the potato cooks the sauce will thicken. 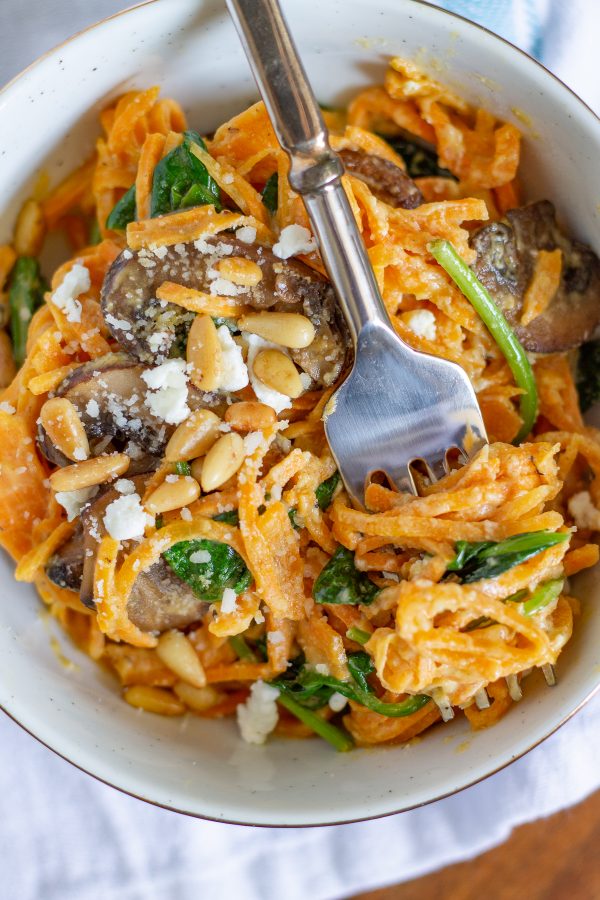 The recipe below is enough to serve two. If you double the recipe, use a dutch oven instead of a skillet to prepare the meal.

How to make Sweet Potato Noodles with a Goat Cheese Sauce:

First, peel and spiralize the sweet potato. Pour the spiralized potatoes into a large bowl and set aside.

Next melt 1/2 tablespoon of butter in a skillet over medium heat. Add the mushrooms, season with salt and pepper, and sauté until golden brown. Remove from the skillet and set aside.

You may want to carefully wipe the skillet clean with a wet paper towel, otherwise brown bits from the mushrooms might impact the color of the goat cheese sauce. Melt the remaining butter in the skillet over medium heat, and whisk in the flour. Let the flour and butter cook for 1 minute before whisking in the milk.

Bring the milk mixture to a slow and steady bowl, and whisk constantly for 1 minute while the mixture thickens. Then whisk in the goat cheese and season with salt and pepper.

Next add the sweet potato noodles. I recommend using thongs to stir and flip the noodles in the sauce. The sauce will get thin as the potato loose moisture and it will thicken up again. You want to let the potatoes cook for about 6 minutes.

While the potatoes are cooking, heat the olive oil in a small skillet over medium low heat and add the pine nuts. Toast the pine nuts until golden brown and set aside.

Add the mushrooms and spinach to the sweet potato noodles and stir to combine. Leave on the heat for another minute, until the spinach has cooked.

Divide the sweet potato noodles between two bowls and top with the pines and a sprinkle of goat cheese and Parmesan.

Save this sweet potato noodle recipe for later: 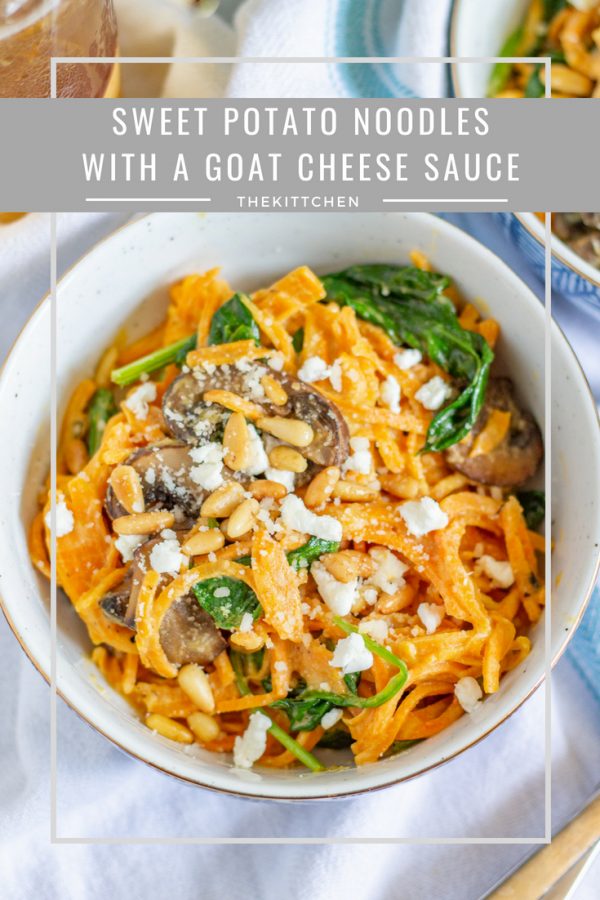