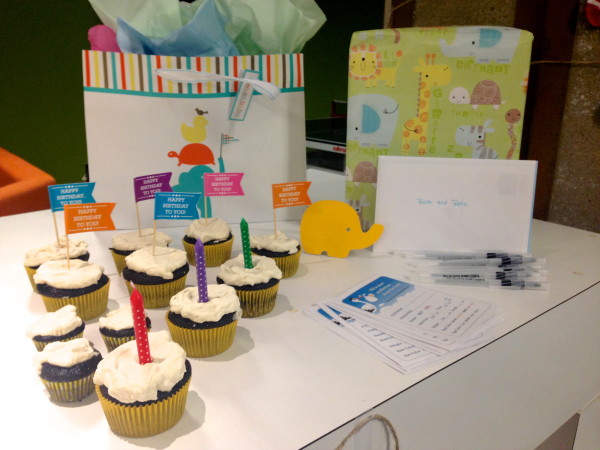 My team at work is 75% women, and several of these lovely ladies have had babies in the past year. Which means that our team has had a lot of baby showers. We have the routine down. But when one of the men on the team told us that his wife is pregnant, we needed to find a way to celebrate that was more guy-friendly. So yesterday, with the help of some co-workers I hosted a Baby Shower/Birthday Party for my male co-worker. Throwing the party on his actual birthday did kill two birds with one stone, but it also let me be more flexible with the theme since not everything had to be about babies.

Here is how it all went down. I talked to his work friends to get a list of people to invite. I invited everyone, reserved Groupon’s game room, and meanwhile scheduled a fake meeting with the guest of honor to block his calendar and keep things a surprise. Then we used LindedIn to get in touch with his wife and invite her to the party.

The couple does not know the sex of the baby – and this probably worked in our favor. If the situation was different, and we had to play a party for a man who is expecting a baby girl… it might have been harder to pick decorations. We found out that the couple decorated the baby’s nursery with an elephant theme – so our decorations fit that theme. We choose the color scheme of green and yellow. We chose green because we work at Groupon, and green is our color. We chose yellow because it goes well with green and is gender neutral. 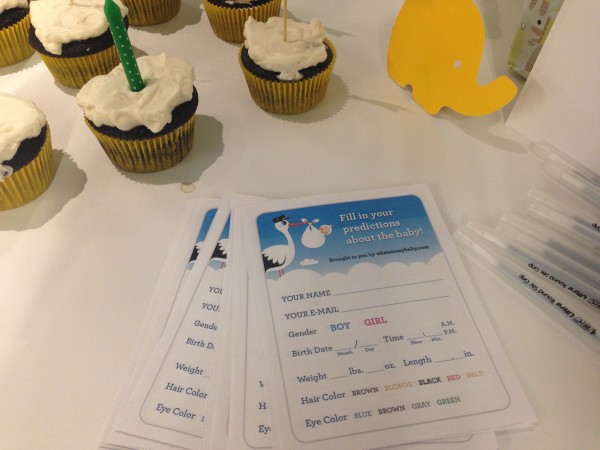 If you want to host a co-ed shower, do these things:

1. Get beer.
2. Let the guys bet on things. The guys got really into filling out forms to bet on the sex, weight, length, birth date, hair color, and eye color of the baby. I am holding onto these forms and once the baby is born I can determine the winner and award a prize. I told them the prize is a 6 pack of beer or a bottle of wine.
3. Half of your cupcakes should be topped with whiskey frosting. This is so easy, and the guys couldn’t stop talking about how much they loved the cupcakes, or stop eating them. I simply made vanilla whipped cream frosting, frosted half of the cupcakes, and then added a couple of shots of Templeton Rye to the rest of the frosting. I used different colored cupcake liners, and decorations to make it easy to tell which cupcakes were which.
4. Try to keep the party 50% men.
5. Get a group gift. If half the people you are inviting to the shower are men… they probably don’t know what to buy for a baby shower gift, nor do they want to take a trip to Buy Buy Baby. In the invitation let people know how they can contribute to a group gift.
6. Keep the number of gifts to a minimum. Most men aren’t interested in opening a giant pile of baby gifts, so we looked at the couple’s registry and picked one main gift from the group, and then just a few cute things that we wrapped in a gift bag. This meant that the opening gifts part of the party was fast – and the couple couple easily carry the gifts home.

Let’s take a look at the decorations. These were all easy to set up, which is key when you are throwing an hour long party at the office. 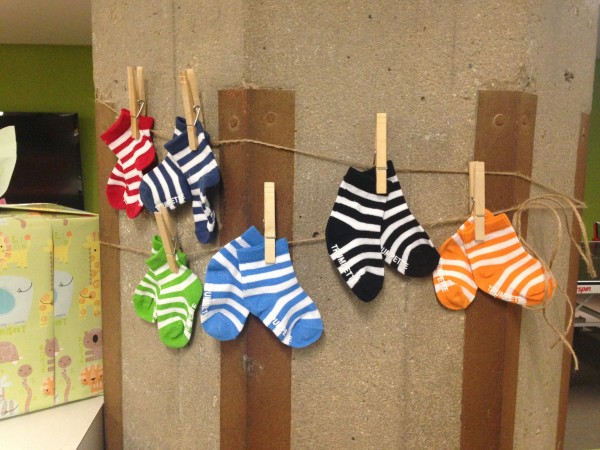 This is a decoration that doubles as a gift! How cute is it? This took under 5 minutes to assemble. 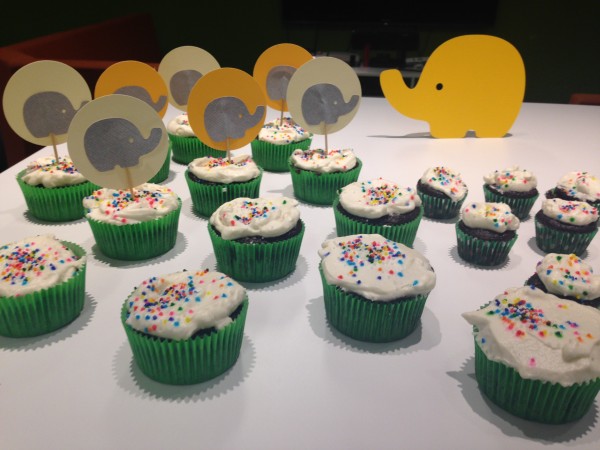 My coworker Ashley has a special printer at home that cuts out shapes! Isn’t that the coolest thing? She cut out the darling elephant cupcake toppers and I assembled them with a little glue and a toothpick. When we move and I get an office, I might need to invest in one of those printers…

Have you ever hosted a baby shower? This was my first, but something tells me it won’t be the last. Do you have any advice to add?