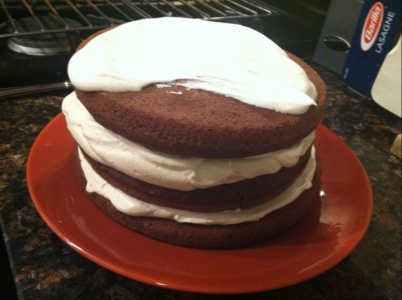 It was a tradition in my family that you got to pick out your birthday cake.  Sometimes we would choose a cake from bakery but most of the time we would choose a cake made by my mother.  I have since continued this tradition with my friends making them cakes on their birthdays.  Not to brag, but I have a solid number of friends, so I generally make a couple cakes or batches of cupcakes a month.  Each cake is a little different because they are for different people.

The most recent cake that I made was for my friend Adrian who I met back when we both lived in New York City.  Although Adrian’s blog is called Angry Aussie Food, he is probably the least angry person I have ever met.  I asked Adrian what type of cake he wanted, and he gave me one word: Chocolate.  I considered making a chocolate cake with chocolate frosting, but Charles convinced me not to.  He said that for Adrian it needed to involve Whiskey.  I agreed.  Then I decided to add espresso since Adrian has an espresso habit, we used to make fun his insane number of facebook check ins at local coffee joints.  In the end I created a chocolate cake (made from a mix because this girl only has so much free time on a Thursday night) with Whipped Cream Frostings in two flavors: Whiskey and Espresso.  The Whiskey Frosting is insanely good, if I do say so myself.  I used the espresso frosting between the cake layers, and the whiskey frosting for the outside of the cake.  Then I melted a few chocolate chips and combined them with some left over frosting to make a darker shade of frosting to write on the cake with. 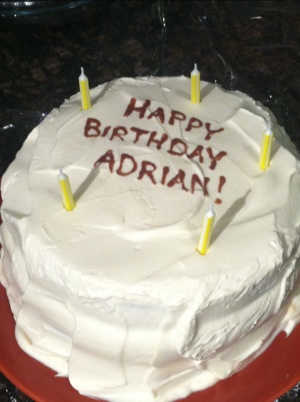 You will need:
Chocolate Cake (I used a mix)
3 cups Whipping Cream
1 1/2 cup Powdered Sugar
1 teaspoon Vanilla
2 shots of Whiskey
2 shots of Espresso
Step 1:
Make the cake, and let it cool.
Step 2:
Combine the whipping cream, powdered sugar and vanilla in a large mixing bowl.  Use a mixer to whip the cream.  Be careful not to over whip.
Step 3:
Divide the whipped cream mix into two bowls.  Add espresso to one half.  Add whiskey to the other half.  If the addition of the whiskey or espresso causes the whipped cream get too watered down, just mix it with the mixer for a minute and it will stiffen up again.  Feel free to add more whiskey or espresso to taste.
Step 4:
Frost the cake.  I used the espresso frosting between the layers and the whiskey on top, but you can do whatever you want.