Learn how to make Thanksgiving gravy from scratch with easy step by step instructions and a video. 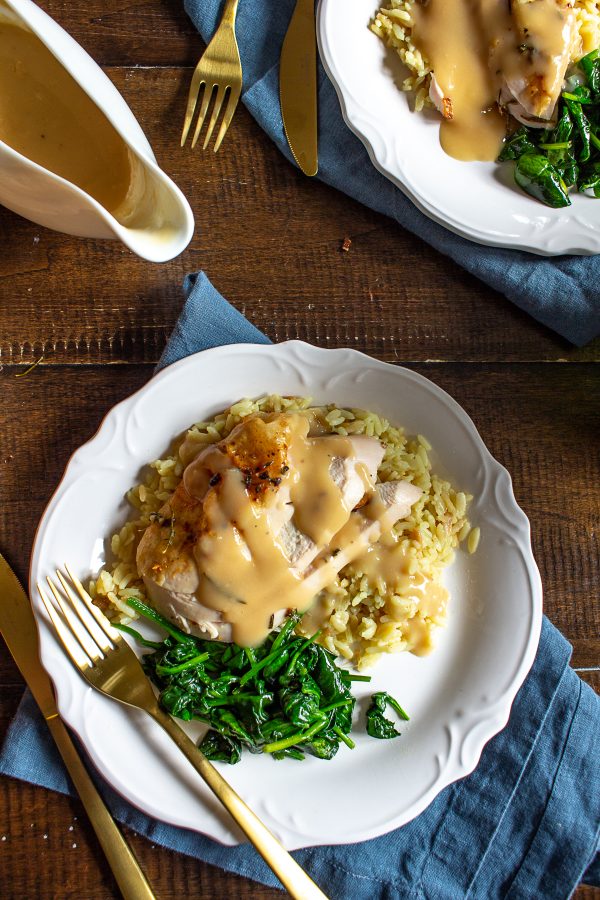 Gravy is an essential component of Thanksgiving dinner. Some people drizzle it over everything on their plate! Monica Geller famously added a Thanksgiving gravy soaked slice of bread – “the moist maker” to the middle of Ross’s post-Thanksgiving sandwich. My Dad adds leftover gravy to his day after Thanksgiving soup. No matter how eat it, you can’t have Thanksgiving without gravy. 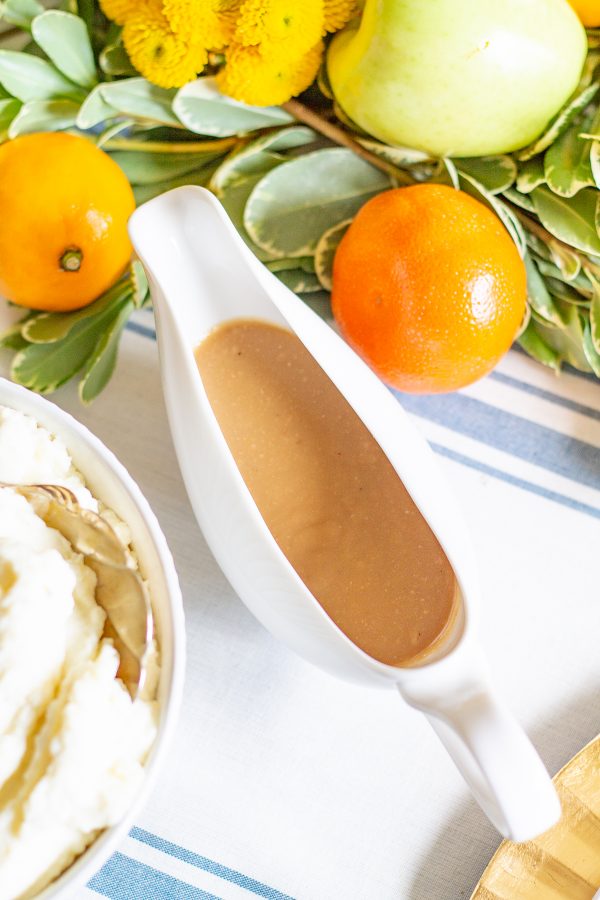 The best way to make gravy is from the pan drippings. The drippings that are left behind are loaded with flavor, and they taste better than any gravy that you could make with a mix. My method for making gravy is to simply thicken the pan drippings and to add a touch of white wine. 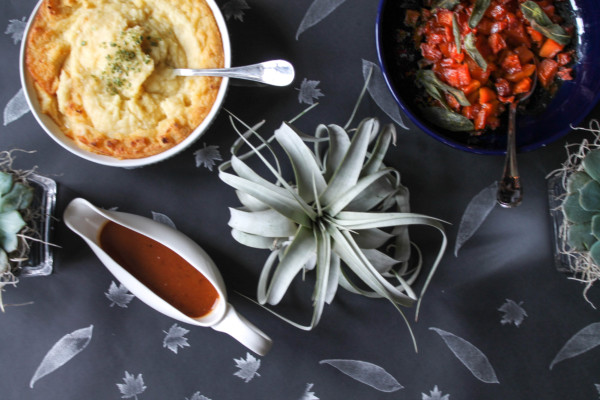 I start by pouring all of the pan drippings into a clear container. The fat will rise to the top, and I use a baster to suck up the dripping under the line of fat. This makes the gravy a little bit healthier. But, you could opt to use all of the drippings fat and all.

Next I combine some butter and flour in a skillet making a roux, this will thicken the gravy. Then I add the turkey drippings and some white wine. I let everything simmer and thicken, and the end result is Thanksgiving gravy! 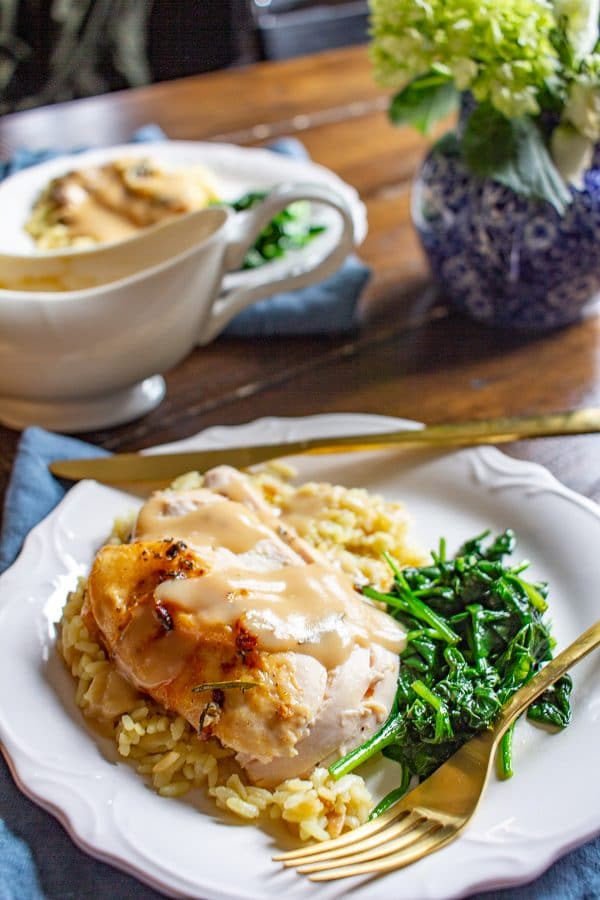 The roux dissolves into the gravy, so you don’t need to worry about lumps. There will likely be some small bits of garlic and spices in the gravy, if you want a perfectly smooth gravy, you can go ahead and strain the gravy through a fine mesh strainer, but I do not think it is necessary.

There are two secrets to making Thanksgiving gravy. The first is to prevent the pan drippings from evaporating as the turkey roasts. There is a simple solution to this – pour broth (just boxed chicken, turkey, or vegetable broth) into the bottom of the pan as necessary. 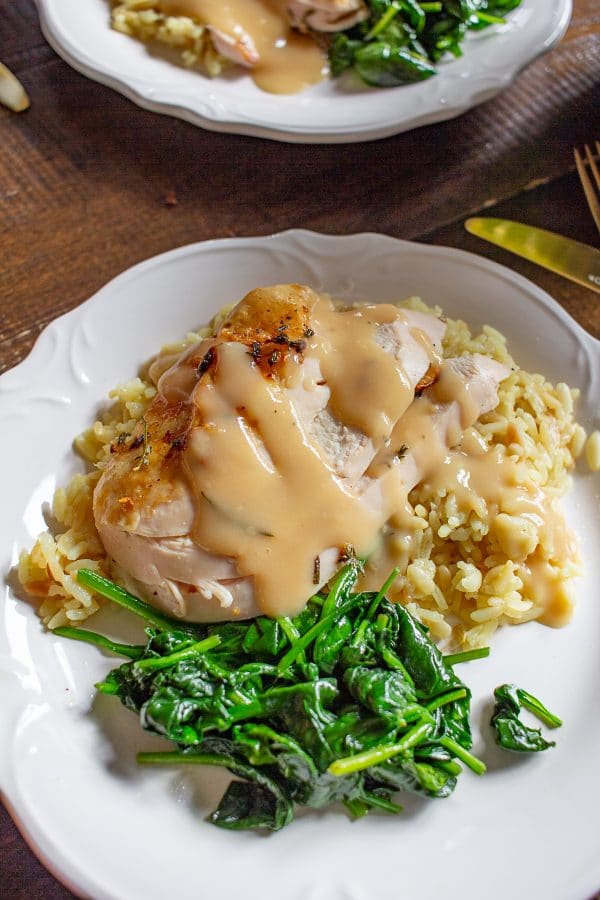 The other secret to making Thanksgiving gravy is to generously spread butter and spices on the outside of the turkey and to fill the inside of the bird with additional seasonings like garlic and shallots. All of these flavors of the turkey work their way into the pan drippings and into the gravy. You will hardly need to season the gravy, usually I just add a touch of salt and pepper to taste if necessary.

Making Thanksgiving gravy is so easy! It takes under 10 minutes – it’s easy to do while the turkey rests. 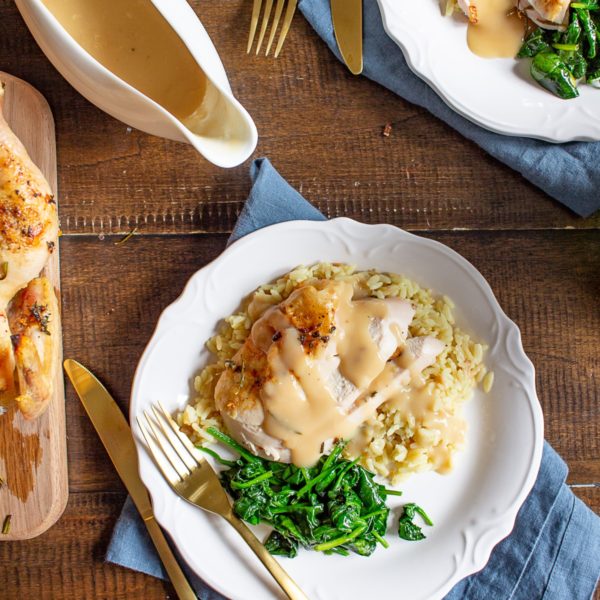 Note: if you brine your turkey your gravy might turn out quite salty. The way to counteract this is to chop up a potato and put it in the gravy. As the potato simmers in the gravy it will soak up that salty flavor… and those chunks of potato are a delicious snack!

How to Make Thanksgiving Gravy from Scratch:

Remove the turkey from the pan. Scrape up all of the browned bits that might be stuck to the pan using a rubber spatula. Carefully pour all of the pan drippings through heat-safe clear container.

In a small saucepan over medium heat, melt the butter. Then whisk in the flour creating a roux. Let the roux cook until it becomes a light golden brown, this takes about 2 minutes.

Whisk in the white wine and bring the broth up to a steady simmer. Let simmer for 2-3 minutes, until the gravy has thickened.

If the gravy isn't thickening enough, melt more butter and flour together in a separate pan, making more roux, then whisk that into the pan. And let simmer for 2 more minutes. If the gravy is too thick, you can add more white wine or some broth.

Taste the gravy and add salt and pepper if you like.

*You can pour the turkey fat into a container and let it harden and then throw it away, or you can store it and use it for cooking. You shouldn't pour the fat down the drain.

Want to save these instructions for how to make Thanksgiving gravy from scratch? Here is an image to save on Pinterest: 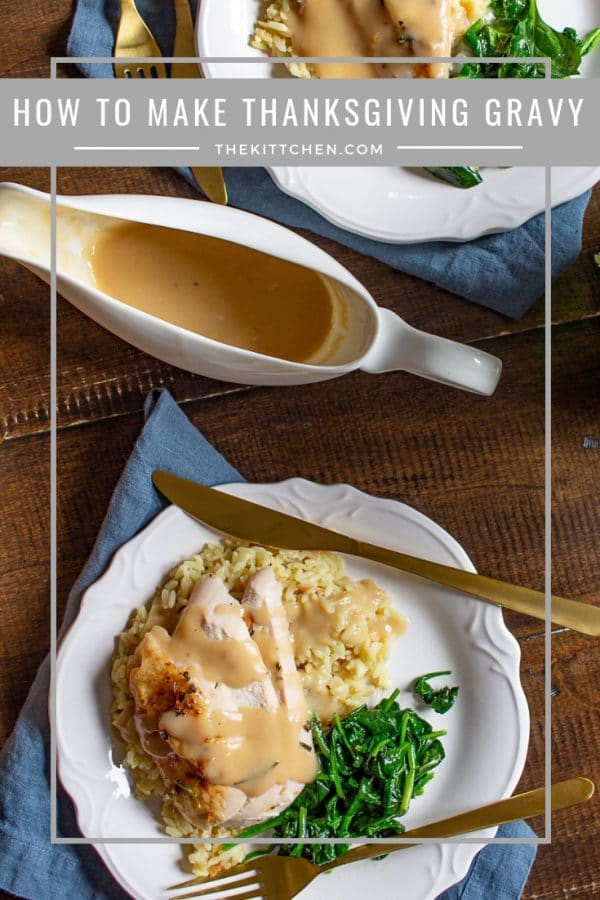