Charles isn’t a dessert lover, but Apple Strudel is the exception. Recently Charles stepped into the kitchen with me and we made this German Apple Strudel. 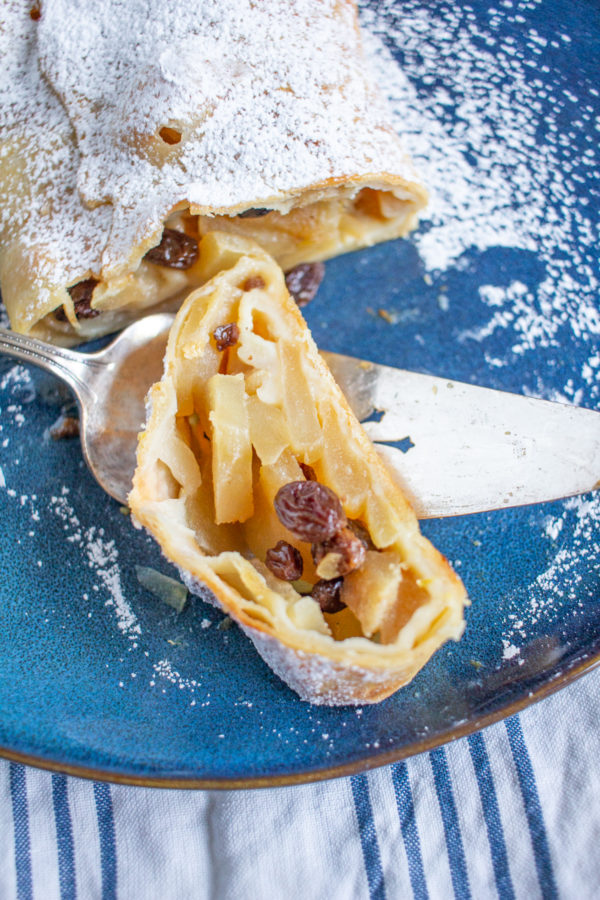 Charles was recently in Munich with his family visiting some family friends. He returned home with a rough outline of this recipe which was given to him by a German woman in her 80s. He read off ingredients and measurements, and some very rough instructions. We turned to the internet to figure out the rest. 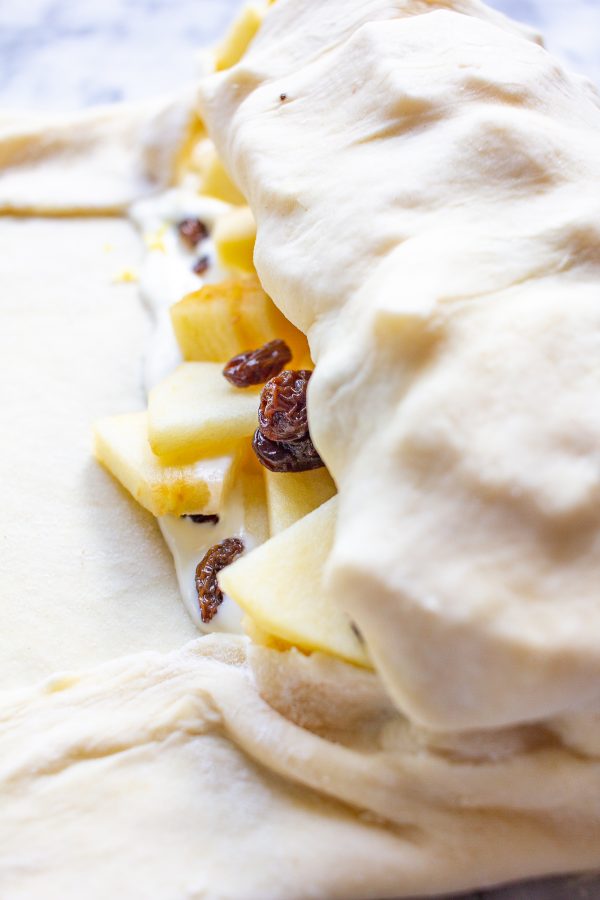 Based on my research, most apple strudels have a breadcrumb mixture in the middle. This one had creme fraiche and lemon zest. Charles insists that this is how his friend has always made it. I am not claiming that this recipe is “traditional” but it is definitely German. If anyone has insight I would love to hear your thoughts in the comments. 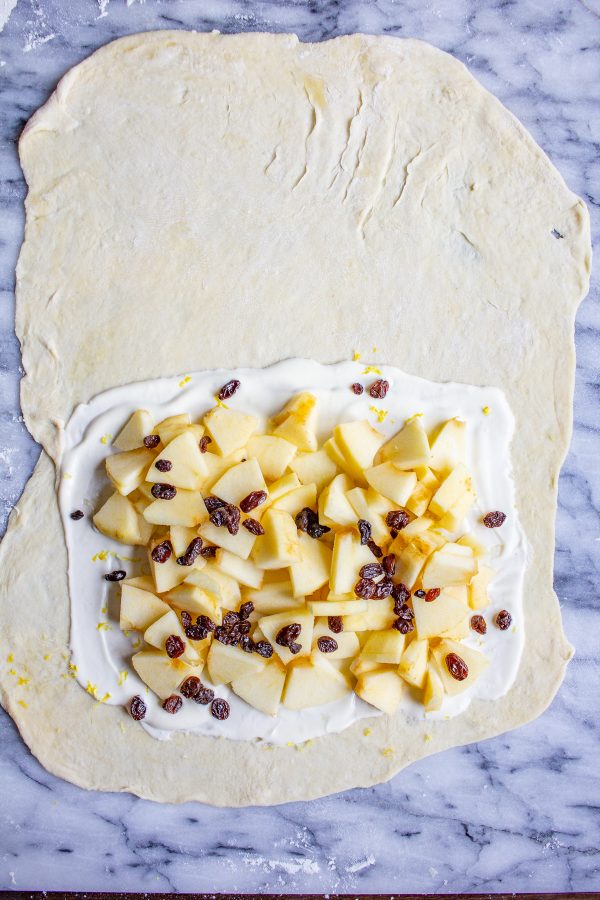 There are some very specific tips for making German Apple Strudel. First if you chop the apples into small pieces it is much easier to roll the dough. You definitely want to let the dough sit for 30 minutes before you roll/stretch it out. Otherwise it is too fragile. And if you roll out the dough on top of a thin kitchen towel you can use the towel to help you roll the dough. 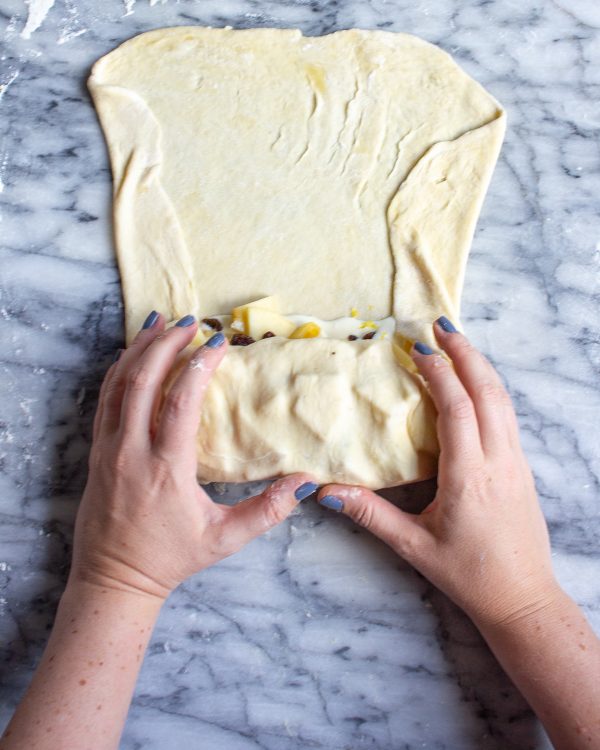 Our first attempt at rolling apple strudel was a disaster. The apples were not sliced small enough, and as a result they tore right through the dough as I tried to roll it. Our second try was much better. 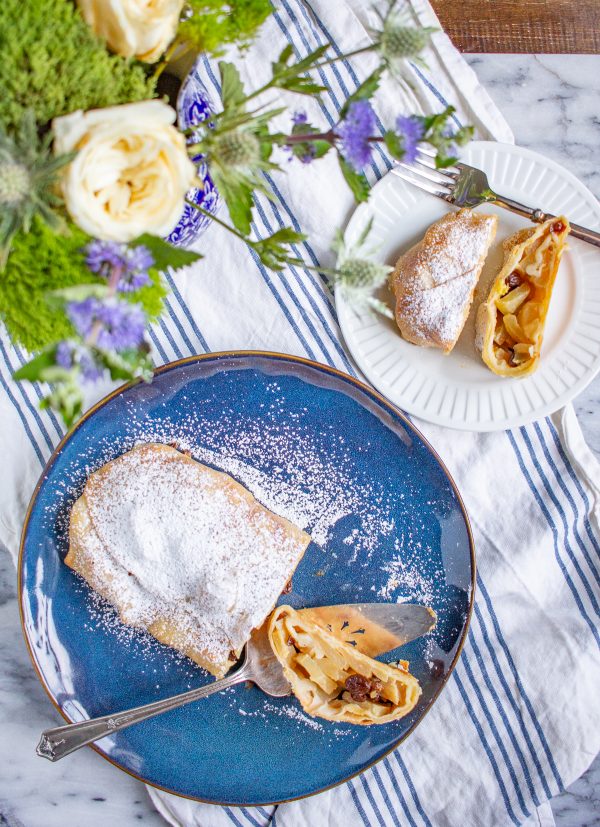 Charles also shared some notes from his friend. She doesn’t add much sugar to the German Apple Strudel because the raisins add a good amount of sweetness. If you want to make the apple strudel sweeter you can add some sugar to the filling. You can also opt to sprinkle some sugar over the top as it bakes. It is also commonly served with powdered sugar on top which gives extra sweetness.

The recipe below is enough to make two German Apple Strudels.

How to make German Apple Strudel:

Next peel and chop the apples. You want to chop the apples into small chunks so that they won't tear the dough as you roll up the strudel. Heat your oven to 350 degrees.

Divide the dough into two equally sized pieces. This recipe makes two apple strudels, so divide the fillings in half and make two strudels!

Spread the crème fraîche on the bottom half of the dough, leaving 2 inches around the edge of the dough. Sprinkle the lemon zest over. Then add the apples and raisins on top of the apples. If you want to make your strudel sweeter, sprinkle 1 tablespoon of sugar over the apples.

Next you want to roll up the apple strudel like a burrito. Fold the sides over and then the bottom and then roll.

Place each apple strudel on a parchment lined baking sheet.

Bake for 30-35 minutes, brushing more of the butter, sugar, and milk mixture over the strudel every 10 minutes.

Serve with powdered sugar dusted over the top.

Want to save this German Apple Strudel recipe for later? Here is an image for you to pin: 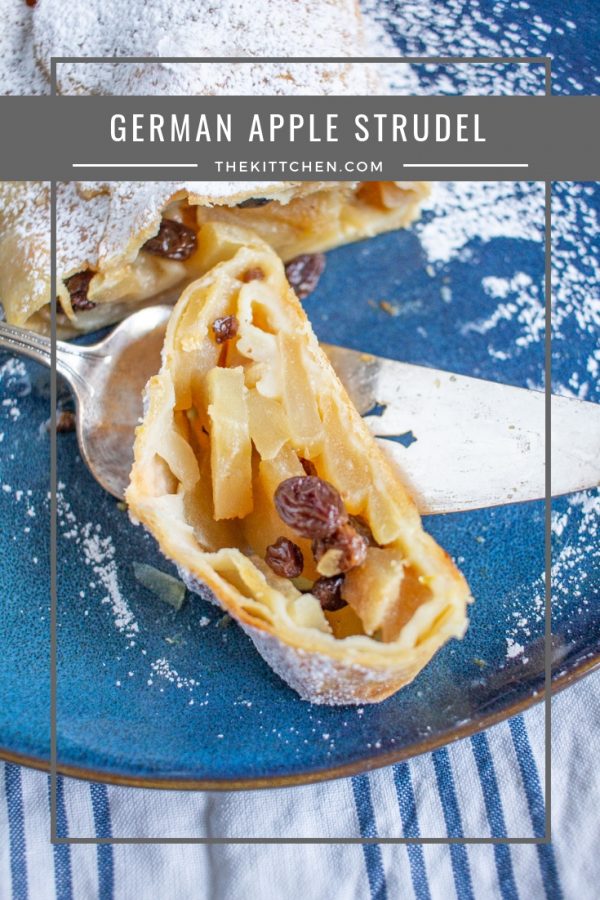