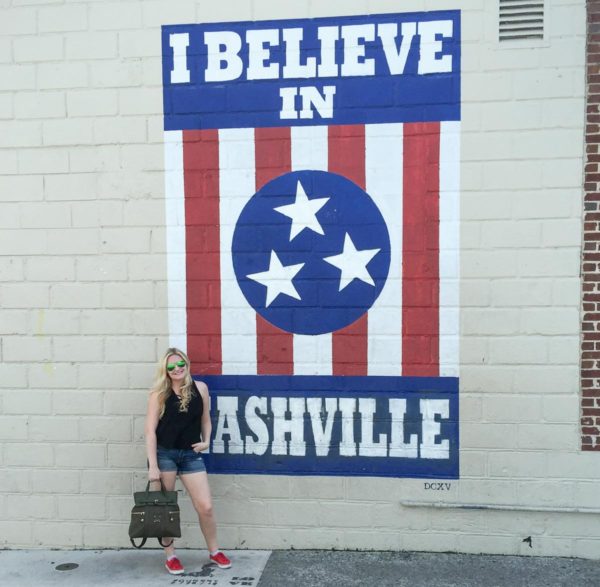 Our recent weekend getaway to Nashville was inspired by two things. The first was Master of None, Aziz Ansari’s Netflix series. In one episode he really wants to impress his date and decides to go big and take her to Nashville for a night. The show painted Nashville as a vibrant city full of restaurants and honky tonks and it moved the city of a few notches on my bucket list. The second inspiration was the Chicago Air and Water Show, an obnoxious loud weekend long event that involves teams of fighter pilots flying jets right over my house. I knew I wanted to get out of town, and after some quick research, I found $80 round trips flights to Nashville and off we went. 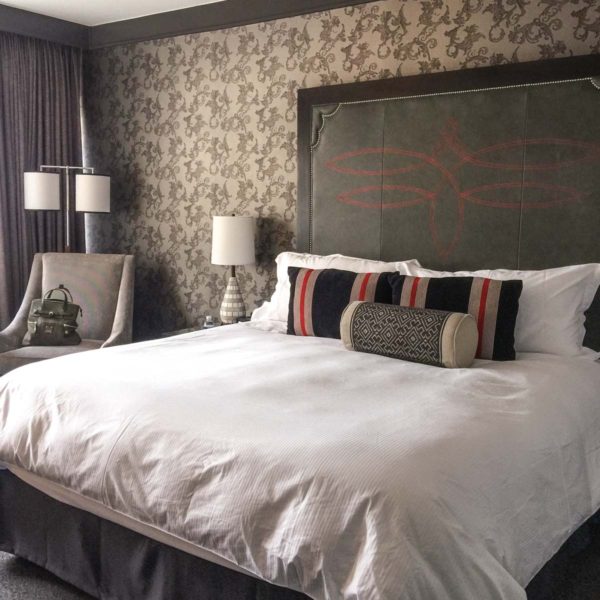 Our first order of business was checking into the Loews Vanderbilt Hotel, which as its name suggests is just across the street from Vanderbilt University. I have stayed at Loews Hotels before (in San Francisco and Rosemont) and I love their amenities. They offer free wifi, and they have a driver that is available to drive you wherever you need to go. We opted to upgrade and stay on the club level, which was a wise decision since it meant that we got breakfast each morning and happy hour at night. It was certainly worth the price. Plus, the club lounge was the perfect place for me to finish some unexpectedly urgent work that popped up on Monday morning.

One thing to know about Nashville is that it isn’t the most walkable city. When I travel my favorite mode of transportation is walking so that I can explore any fun things that I encounter, but that didn’t really work in Nashville, it’s just too spread out. We debated renting a car, but Uber was a less expensive and more sober alternative. Just something that you might want to keep in mind. 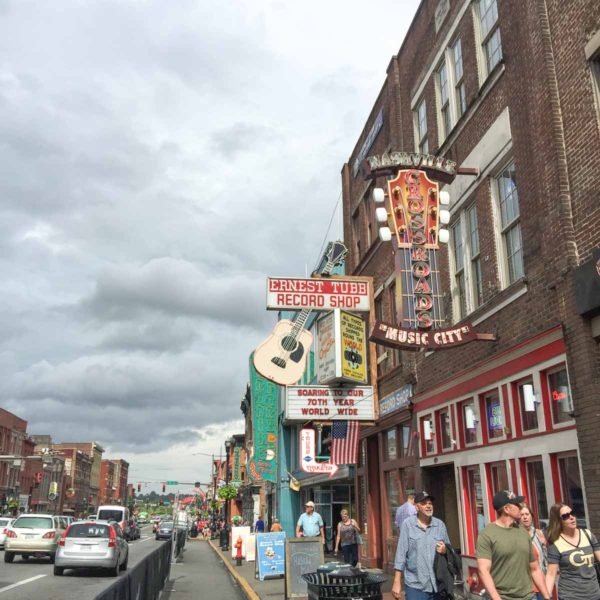 After settling in at the hotel, we headed downtown to explore. Since it was Saturday, Broadway was packed, mostly with bachelorette parties each wearing matching shirts in different colors. The street is lined with honky tonks, all with live music, along with half a dozen shops selling cowboy boots and hats. 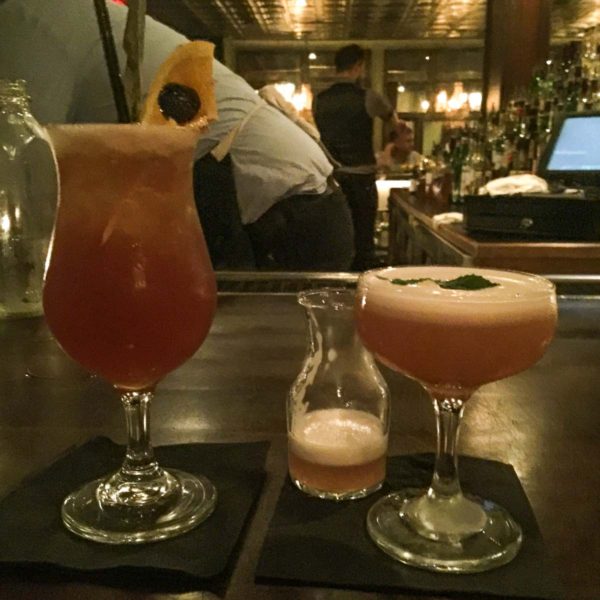 Later that night, we walked from our hotel over to Patterson House to meet an old friend from college. Patterson House is a speakeasy-style bar that reminded us of Violet Hour in Chicago. The building itself only has a small sign and looks more like a home than a bar. Long velvet curtains behind the hostess stand hide the bar. Like Violet Hour, you don’t just walk in, you are given specific seats. No one stands, everyone sits. And word on the street is that if you try to order shots they will kick you out.

We waited for about 30 minutes before being led through the curtains to the bar. Charles was very specific in wanting to let you know that the bar stools at Patterson House are very uncomfortable, which is unfortunate when you are paying $13 a drink. Otherwise, we had no complaints. Patterson House is a classy alternative to the honky tonks and debauchery on Broadway. 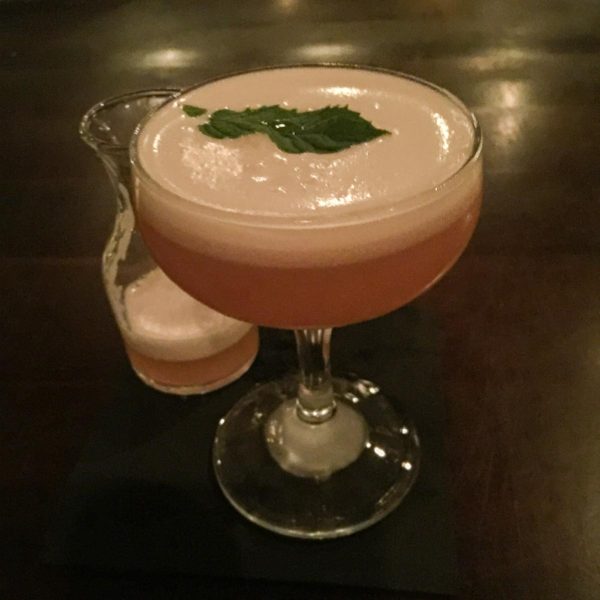 The menus are organized by spirit, and unlike Violet Hour, they do make vodka drinks. In addition to cocktails, there is a small food menu filled with bar snacks like fried brie and grilled cheese with tomato soup. I ordered the light citrusy gin-based “Yes, Always”. While Charles tried some stronger whisky based cocktails, and the grilled cheese sandwich. 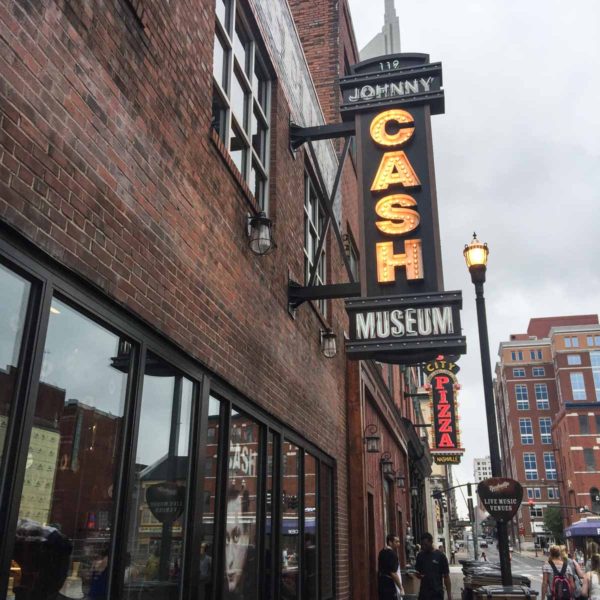 On our second day in Nashville, we mixed culture with food. We started off at the Johnny Cash Museum. I chose this instead of the Country Music Hall of Fame because Johnny Cash’s music is rock enough for Charles to like it, and it seemed fitting to start my husband’s country music education with the man in black. The small museum is located just off of Broadway, beside the center of all the action. 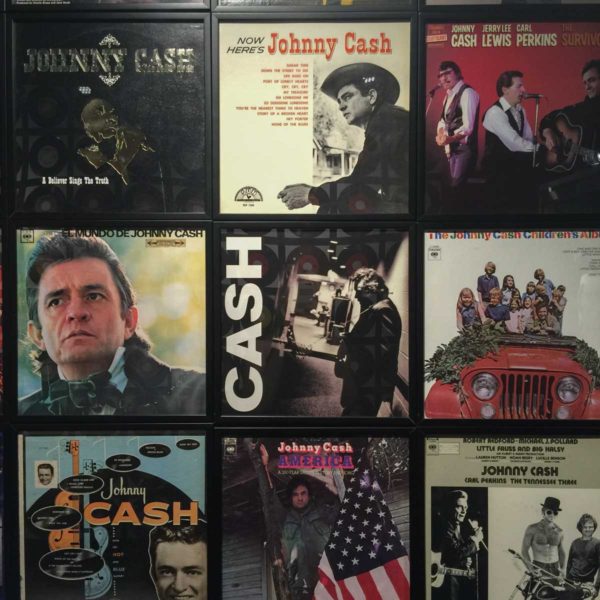 The museum is home to instruments, stage costumes, letters, and other items owned by Johnny Cash and June Carter Cash. You can easily see the museum in an hour, but you could choose to spend hours there listening to music and watching videos. You can choose your own pace. Charles and I both especially liked learning about Cash’s involvement in bettering the prison systems in America, and I loved getting to watch video from this performance at San Quentin. 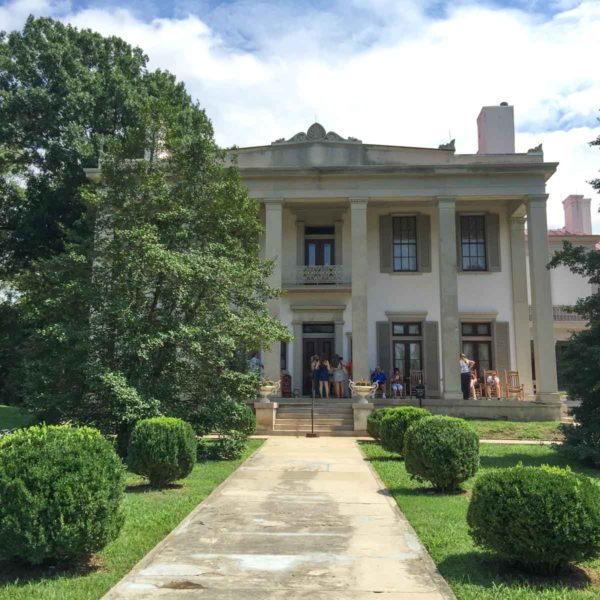 Next, we visited Belle Meade, one of the historic plantations that helped to put Nashville on the map. At Belle Meade, costumed tour guides give visitors a glimpse into life in the South during the 1800s. 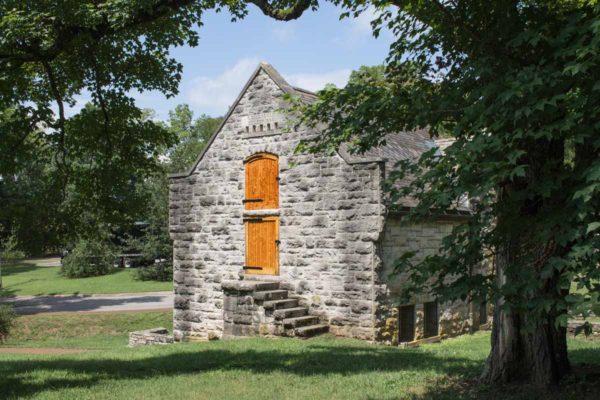 During the 1800s the plantation was home to the Harding and Jackson families, and the plantation was almost entirely self-sustaining, producing all of its own food and necessities. The plantation was also home to up to 136 slaves. While the guided tour focused on the mansion, you are able to tour the other buildings on the property, including the slaves’ homes, on your own. 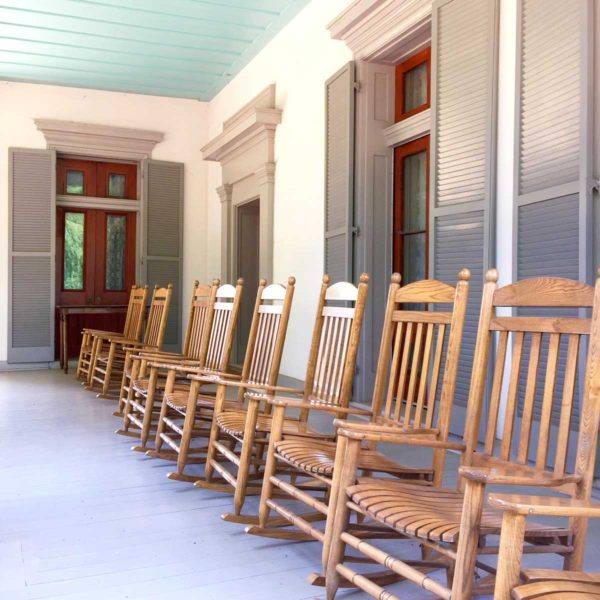 I was surprised to learn at the Harding and Jackson families made their fortune breeding thoroughbred racehorses, and many of today’s famous race horses, including triple crown winners, are descendants of Belle Meade horses.

Today the property is home to a winery, and the tours end with a wine tasting. Belle Meade is a place where you could spend the day. It has a restaurant, plus an outdoor wine bar, and there is a lawn game area where you can play croquet, horseshoes, and bocce. Charles beat me at bocce (again).

Belle Meade is just a quick 20-minute drive from downtown Nashville and we had no problem taking Uber there and back. 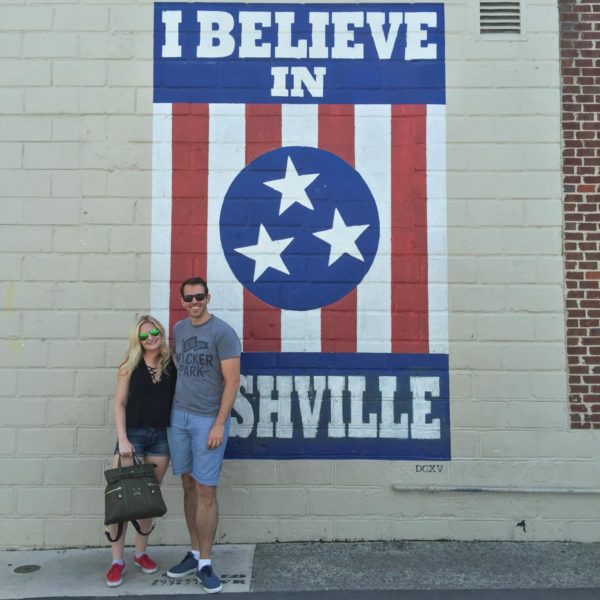 We had the Uber drop us off at Draper James, a boutique owned by Reese Witherspoon. There is a famous mural next to the shop, and I couldn’t resist the photo opportunity. 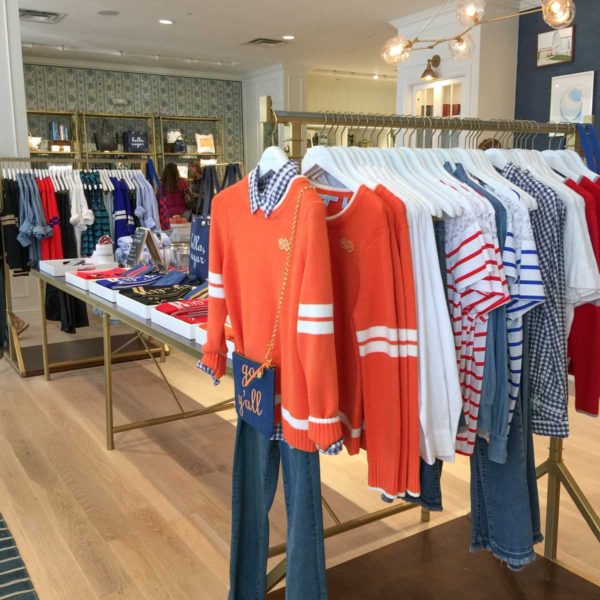 I browsed through Draper James, where you are greeted by friendly saleswomen who offer you sweet tea. 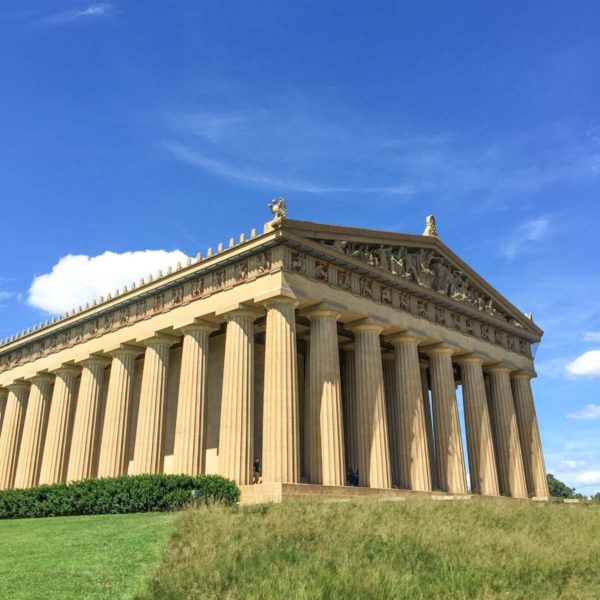 On my last day in Nashville, I started my day with a walk to the Parthenon. One of Nashville’s nicknames is the Athens of the South because the city is home to a full-size replica of the Parthenon. It was Monday, so the Parthenon was closed, but I still got to see the impressive structure, and I enjoyed a nice walk around the grounds of Centennial Park. 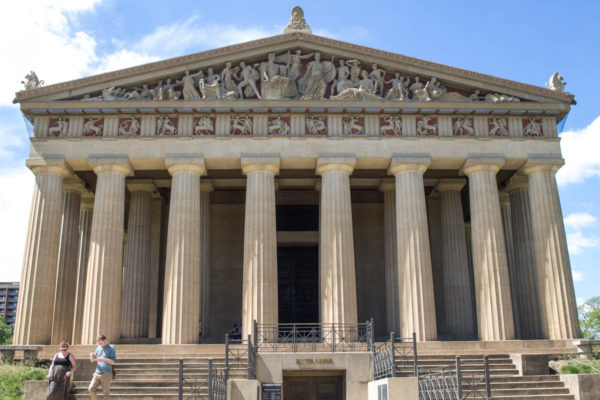 Three days in Nashville felt just right. It wasn’t quite enough time to visit all of the restaurants that friends recommended, but it was the perfect amount of time to take in the citie’s sites. Next week I am going to tell you all about where I ate during my trip.