Here is my guide of what to do in Helsinki! I love this modern European city – there is so much to see and do, and the food is wonderful. 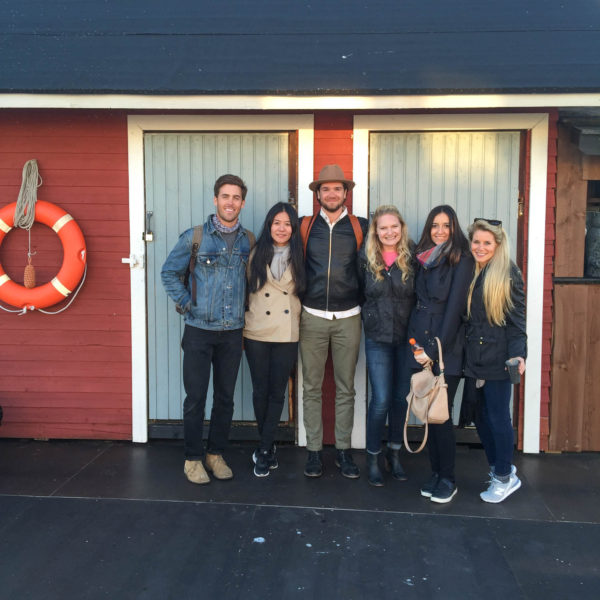 When I was invited on a press trip to Finland hosted by Finnair and Visit Finland, I said yes without even asking who else was going. I hit the jackpot when Olivia, Kessara, Daniel, John, and Neda were my travel companions. I had met Dan and Neda a couple of times, and I am friends with Olivia, but somehow the six of us became instant friends, and we spent almost every waking hour together – even our free time. You might have seen some photos from the trip on social media already, but today I am excited to tell you all about what to do in Helsinki.

I took lots of Snapchats throughout the trip, and you can watch a little video from our adventure right here. 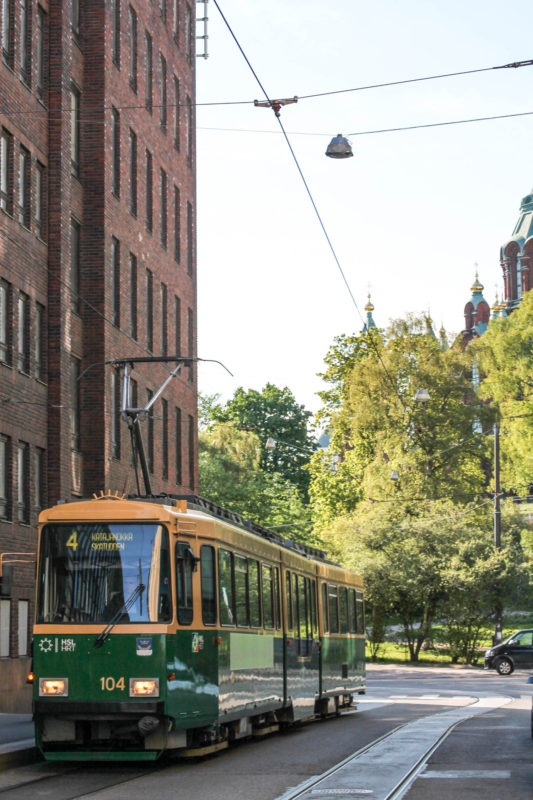 Our journey to Finland began with an 8 hour and 20 minute Finnair flight. I am accustomed to flying coach to Europe, and was thrilled when we were given business class seats. There was a menu for our 4-course meal with an impressive wine list, seats that reclined into beds, cozy pillows and comforters, amenities like Clarins moisturizer and lip balm, and plenty of movies to choose from. I slept the entire 6-hour stretch between dinner and breakfast. I arrived in Helsinki feeling refreshed, and ready for the day, and jet lag wasn’t a problem during the trip. 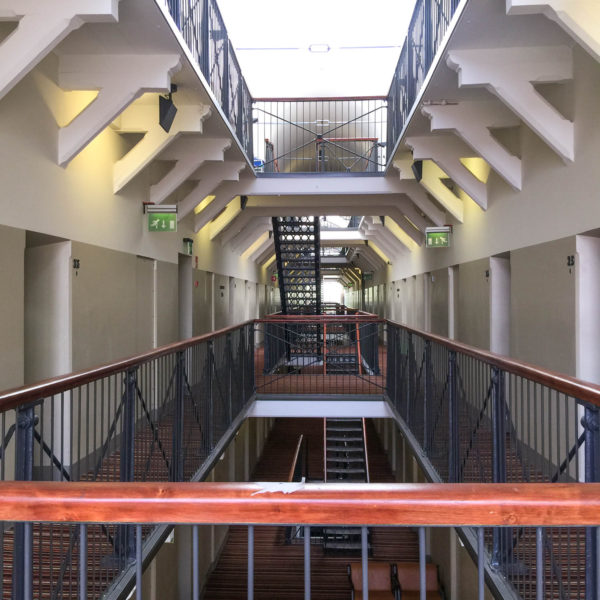 Where to stay in Helsinki:

Once we arrived in Helsinki we checked into Hotel Katajanokka, the old jailhouse hotel. It operated as a jail for 170 years before being converted into a hotel. Each individual room fills the space of two of the former jail cells (each housed 6 inmates), is spacious and has a desk and free wifi. The complimentary breakfast was a highlight of our stay. Unlike the typical breakfasts at European hotels, the large buffet included eggs, bacon, and pancakes, in addition to the more standard fruit, pastries, meats and cheeses. 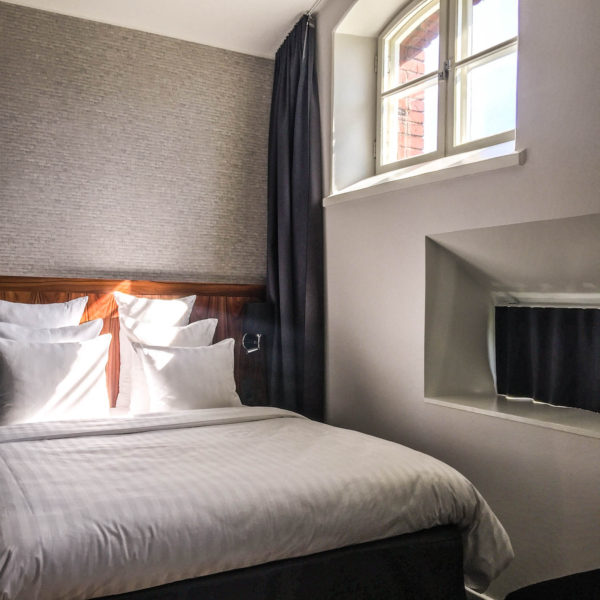 The jail has a fascinating history, and I was excited to go on a tour to learn more. During (and after) World War II many political prisoners were held at the jail, including Finland’s wartime president, Risto Ryti. These days, Jan Jalutsi, a former inmate is a frequent visitor to the hotel. He escaped from the prison six times, and now stays at the hotel every couple of months.

What to do in Helsinki: 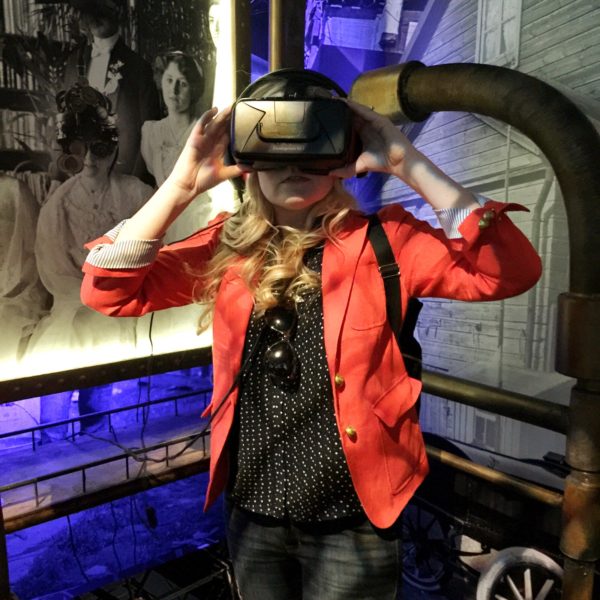 One of the first stops on the trip was the Helsinki City Museum which had opened three days before we arrived. This free museum is just so much fun, and it’s so conveniently located that you can easily add it to your itinerary. Many of the exhibits at the museum are interactive. 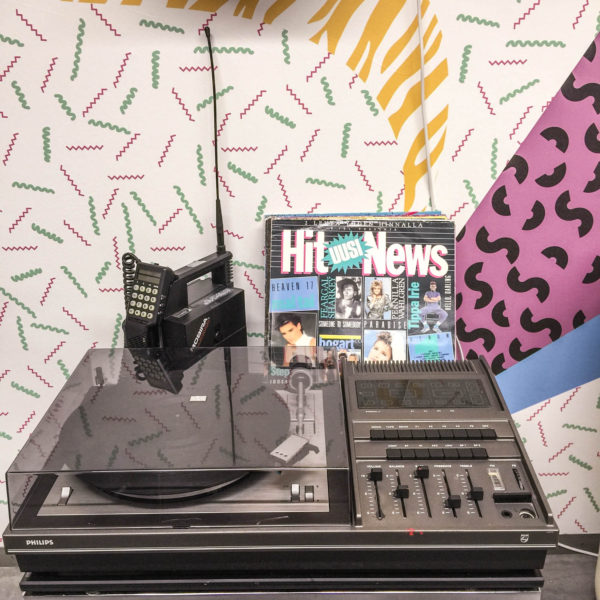 Highlights included the 80s themed room, the time machine with virtual reality goggles that let you experience historic Helsinki, and an old schoolroom. It would be equally fun for both kids and adults to explore – plus admission is free! 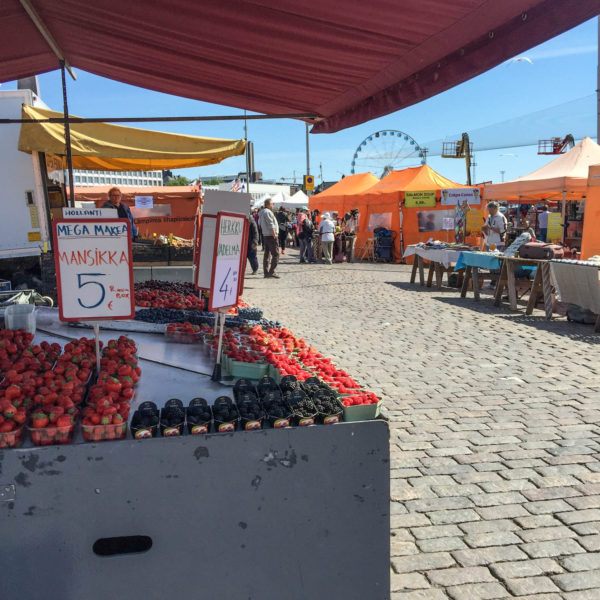 We had lunch at Bronda – a gorgeous restaurant (more on that later) and then we walked over to the central market. Stands sell fresh produce, plus little pop up cafes sell things like coffee and crepes, and you can also purchase Finnish products like reindeer skins. 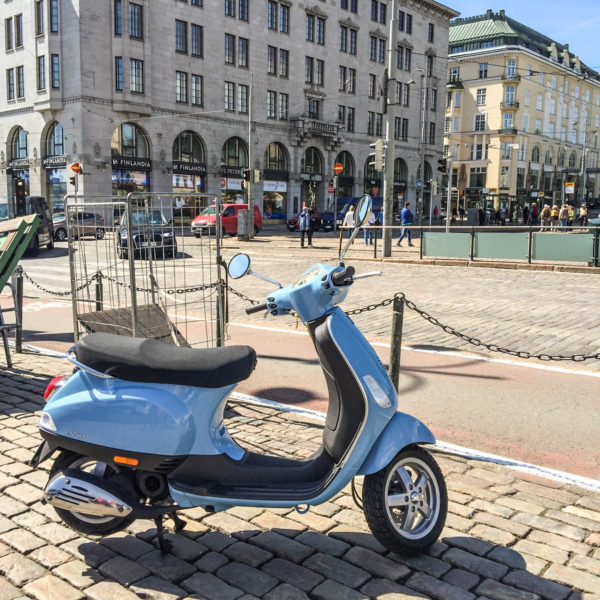 At the market we boarded a ferry to Vallisaari, a small island that was once a small military base. 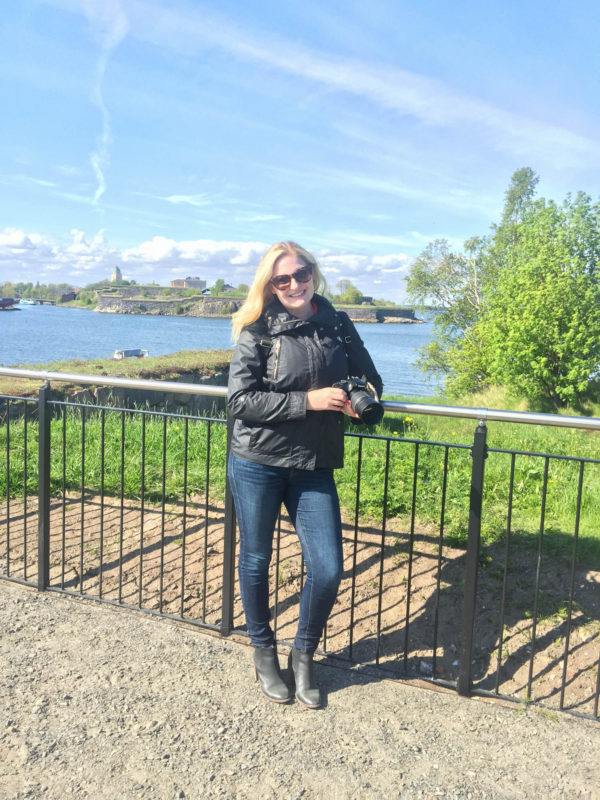 Today nature has taken back the island and it just opened up to the public for hiking and exploring. 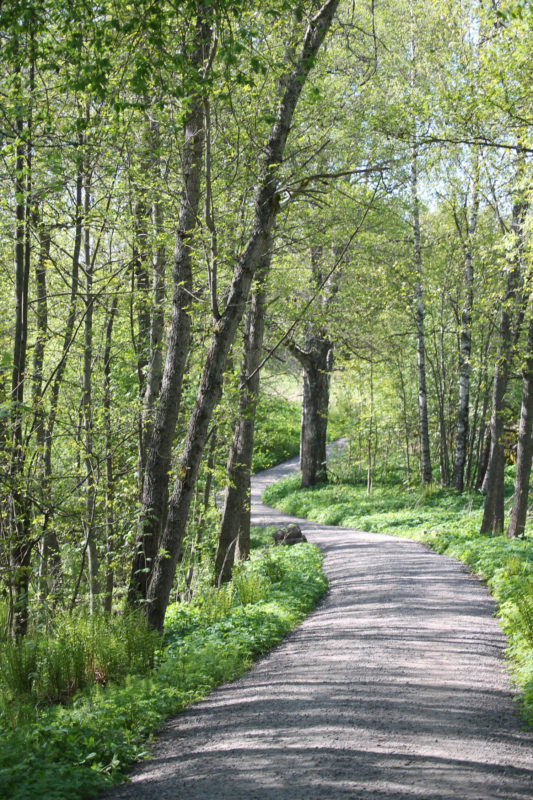 The island has beautiful green winding trails. Olivia kept saying that it reminded her of the forest in Snow White. 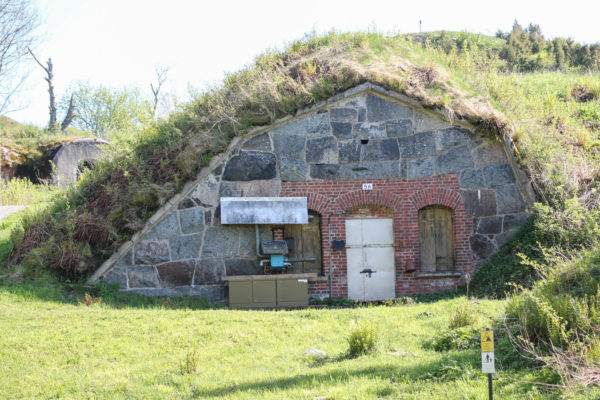 Plus ammunition storage buildings that look like little homes. Nowadays they would make for fun hotels or restaurants. Helsinki is considering ways to repurpose them. 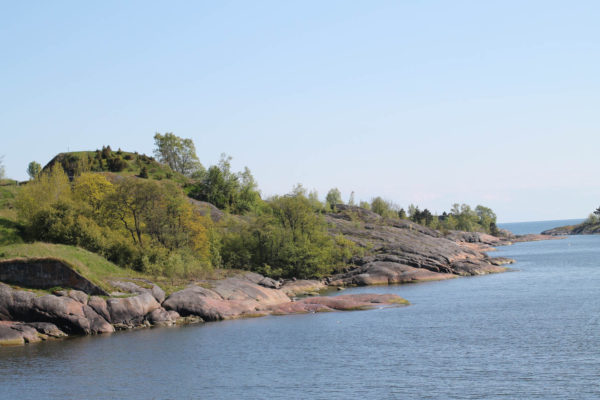 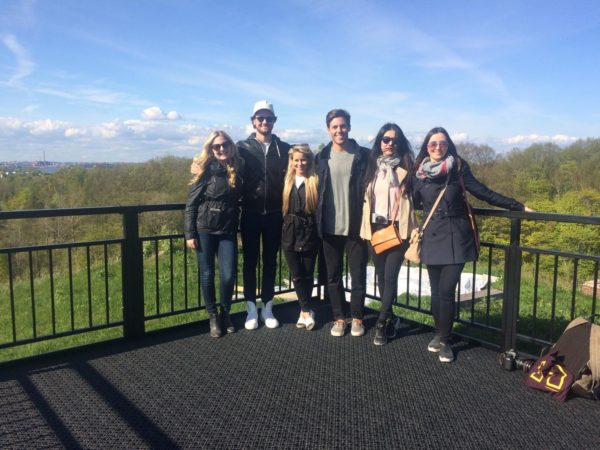 Perhaps heeled boots weren’t the most logical shoe choice, but the three-mile hike was the perfect activity for the warm spring day. And somehow we all kept dressing in similar color schemes… I told you we clicked instantly. 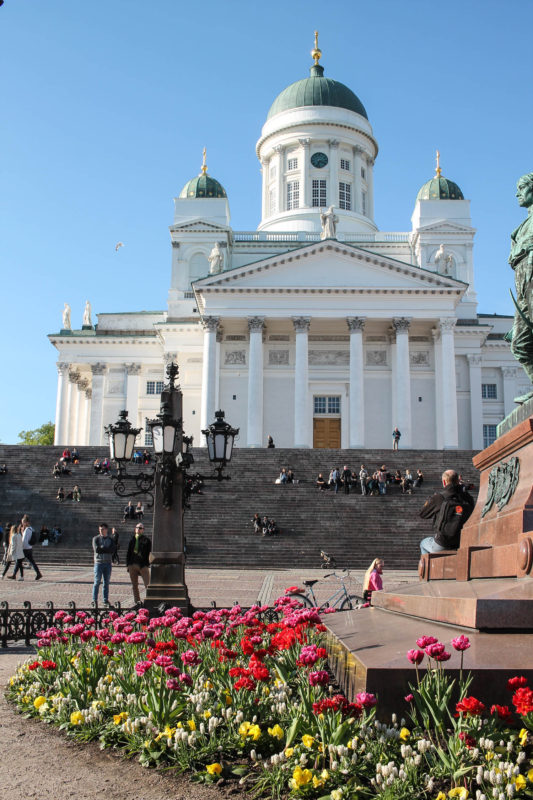 That day we also saw some of Finland’s architectural landmarks. The Helsinki Lutheran Cathedral is in the center of the city, and it’s right across from the Helsinki City Museum. You can’t miss it, we went past it multiple times a day. 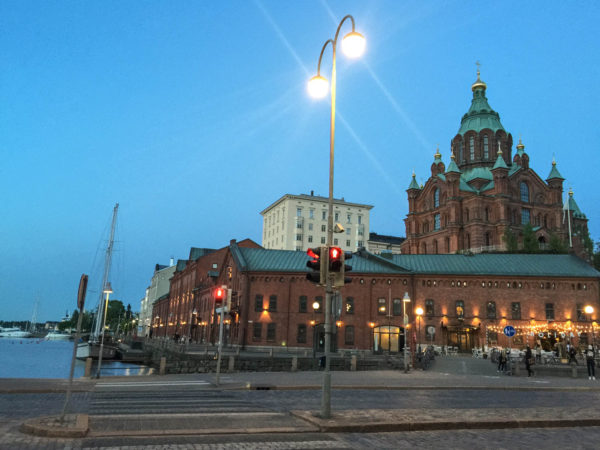 And our hotel was on a small island near the Uspensky Orthodox Cathedral which was built in 1868, and is one of Helsinki’s tallest landmarks. Staying near the cathedral made it impossible for us to get lost, since we could see the cathedral from almost anywhere in the city, and the hotel was just down the street.

The Chapel of Silence: 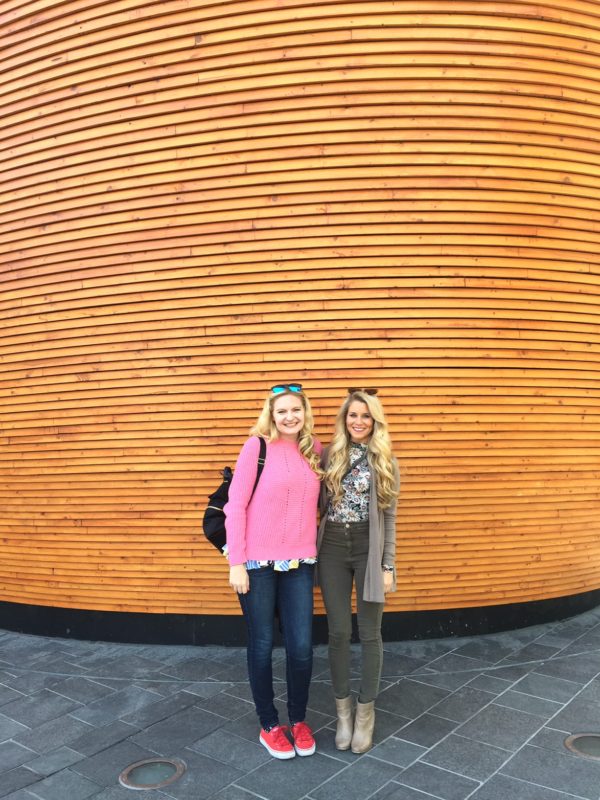 The next day we started things off by visiting the Chapel of Silence. The Chapel of Silence is a stunning example of Finnish design. The building resembles a ship, and was made out of three types of wood. The chapel is more of a place for people to meditate and be with their thoughts in silence. There are no formal church services, but there are prayers given throughout the day. 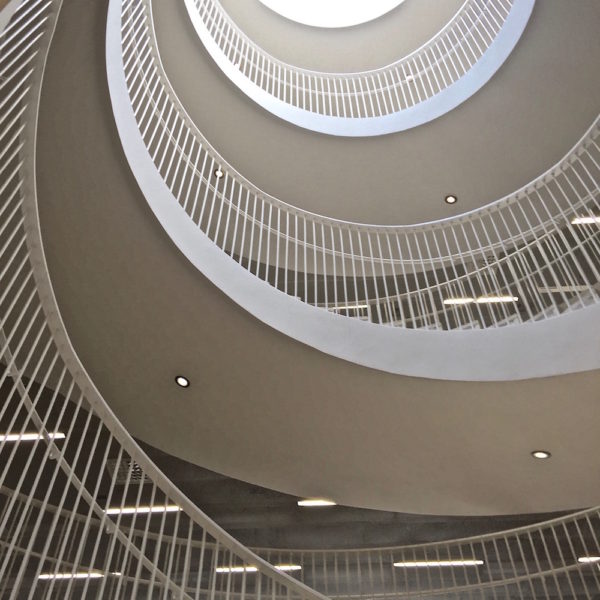 Then we made a quick stop at the Helsinki University Library which is a must for any architecture nerd. The Finns just get good design, it was all around us. 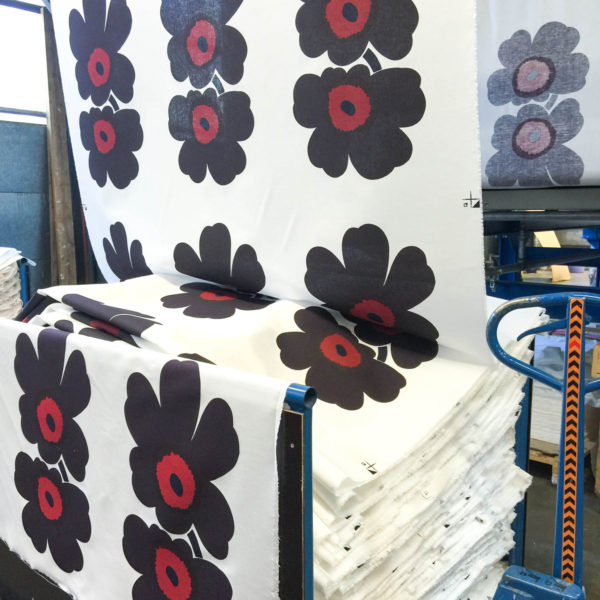 Our trip to the Marimekko factory was one of my favorite excursions. Founded in the 1950s, Marimekko is a textile company/housewares brand/fashion retailer. Their iconic bright and bold patterns became famous when worn by Jackie Kennedy in the 60s. They have created thousands of patterns, including stripes, florals, and geometric. We went to the factory, which is slightly outside of the city, but there are Marimekko stores all over Helsinki – even in the airport. 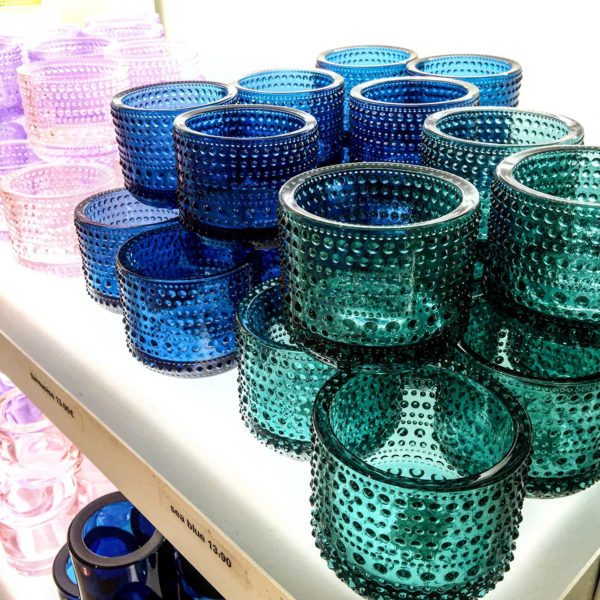 We also stopped into Iittala, a glassware company, and if glass wasn’t so heavy and breakable I probably would have tried to bring all of it home. 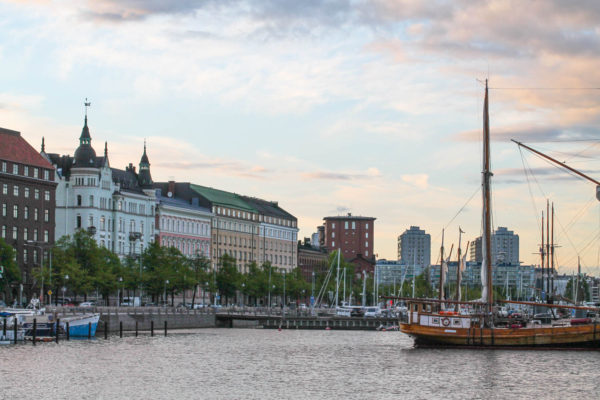 One of the most amazing things about our time in Finland was that the sun didn’t start setting until 10pm, and it wasn’t dark until after 11pm (although it never got too dark since the moon was full), and the run rose again at 4am. 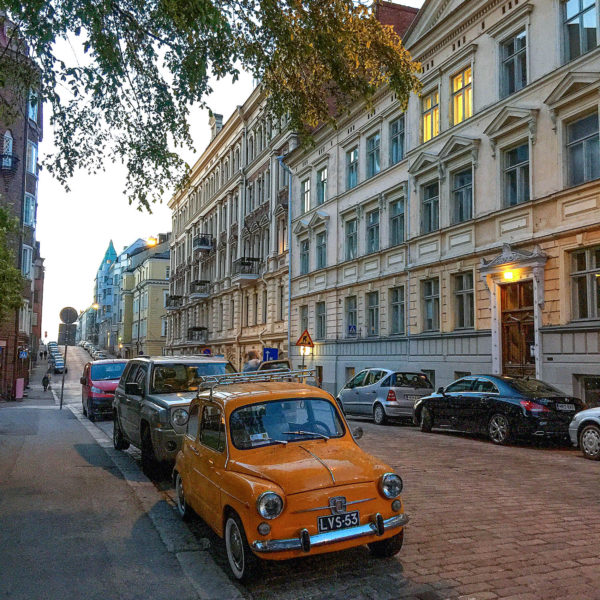 The extended daylight hours gave us more time to explore and take photos. The photo above was probably taken around 10:30pm. Taking advantage of the long hours of sunlight is one of the best things to do in Helsinki. 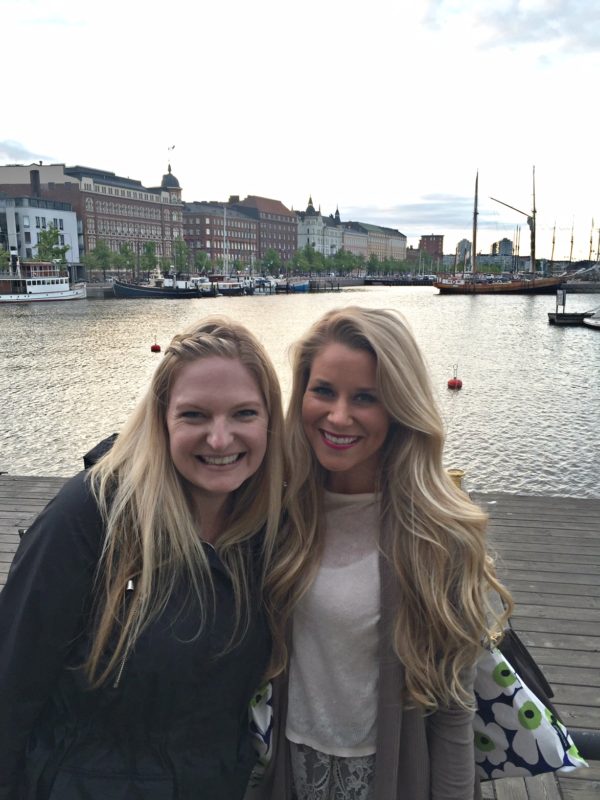 Another interesting thing is that the sun sets very slowly, it took about an hour for it to set, which meant that magic hour lasted longer. 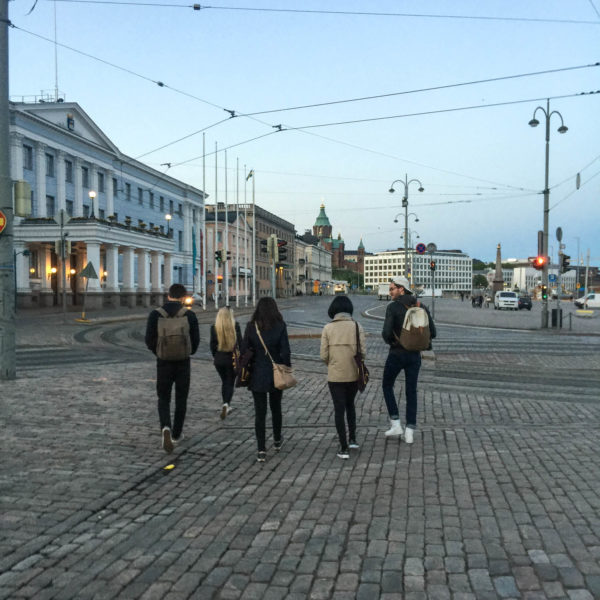 Next week I will tell you all about the food we tried in Helsinki (spoiler alert – it was beyond incredible), and after that we will head over to Turku!

Have you been to Helsinki? Did I miss anything on my list of what to do in Helsinki?

Where to Eat in Helsinki

What to do in Helsinki in Winter