A guide of what to eat in New Orleans – these are the 11 foods you cannot miss! 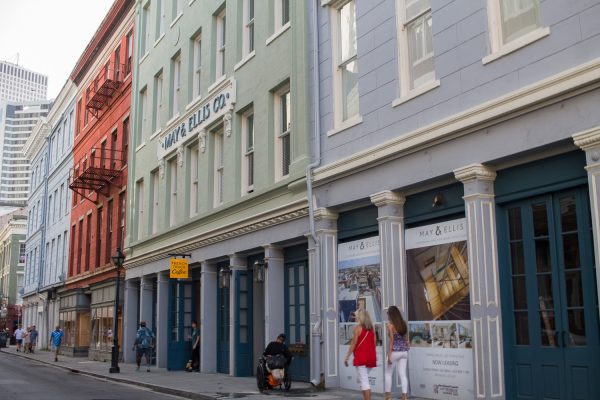 What to Eat in New Orleans

I don’t like oysters, but I genuinely love the chargrilled oysters at Dragos. I first discovered them at Oysterfest a couple years ago. Dragos had a truck that was churning out their famous oysters and it was love at first taste. Honestly, if you put that much butter, garlic, and cheese on a shoe it would probably taste ok. But the Dragos oysters are far better than ok, they practically melt in your mouth. My friend from grad school who generously provided me with extensive recommendations was very specific and said to go to Dragos for the oysters and only the oysters, she said the rest of the menu isn’t as good. 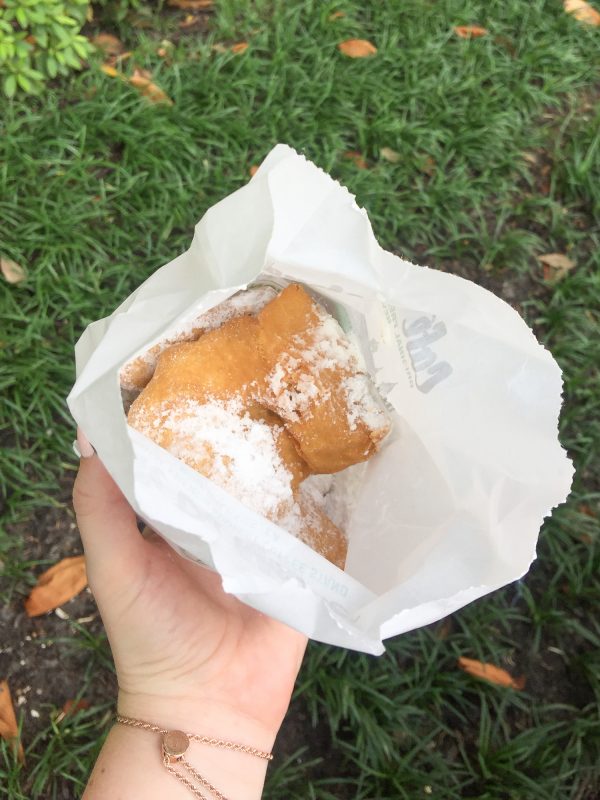 The beignets at Cafe Du Monde are famous for a reason. They are doughy pillows of heaven, and your taste buds will be thankful for the experience. 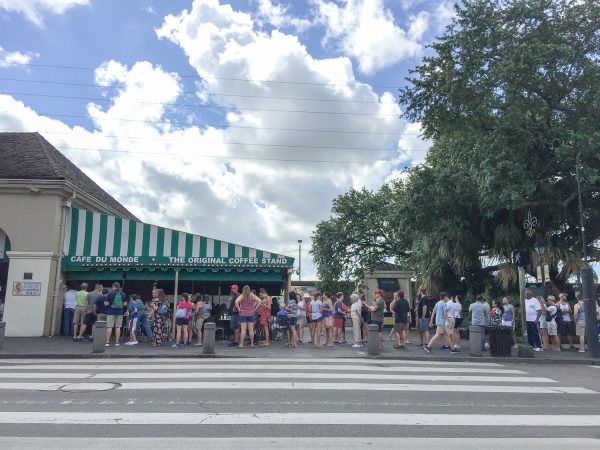 The line at Cafe du Monde is practically a national landmark, so instead of waiting in the line to sit in the restaurant, go to the takeout window. The line moves swiftly, and you can take your beignets and eat them across the street in Jackson Square. Just make sure you have cash! 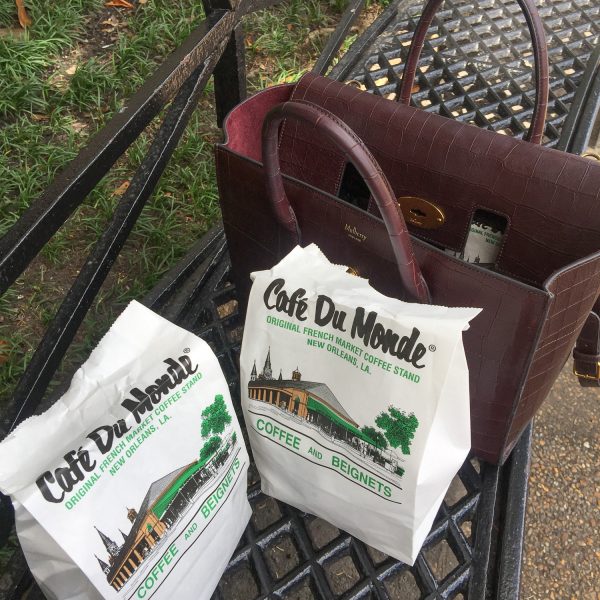 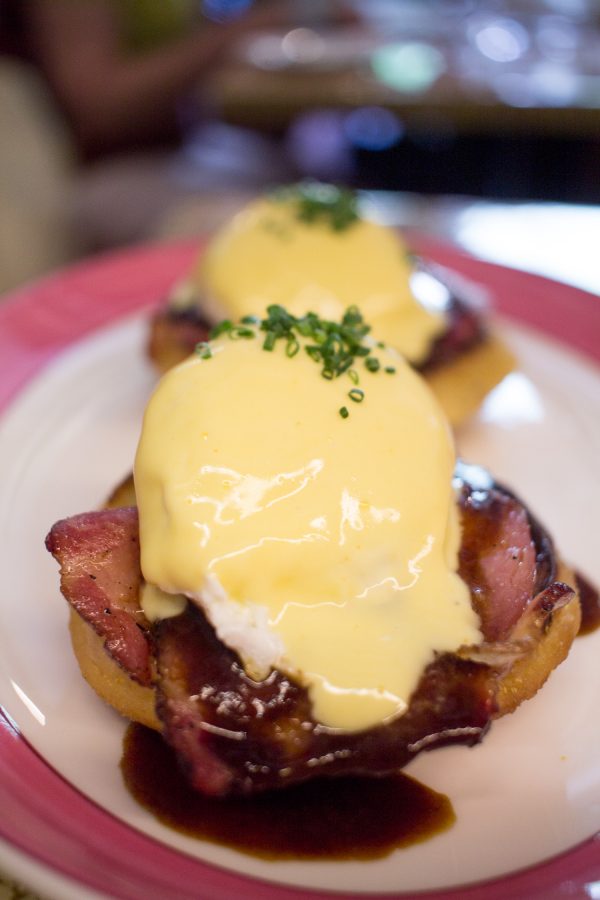 Brennan’s is right in the French Quarter and it was a short walk from our hotel. The restaurant is more formal than the other brunch spots we tried, the interior is gorgeous! There is also a courtyard that would be lovely when it isn’t super hot and humid. The menu at Brennan’s features a mix of traditional items like benedicts along with some distinctly Southern offerings like gumbo and turtle soup. Charles had Eggs Hussarde,  a twist on Eggs Benedict made with coffee cured bacon and marchand de vin sauce. 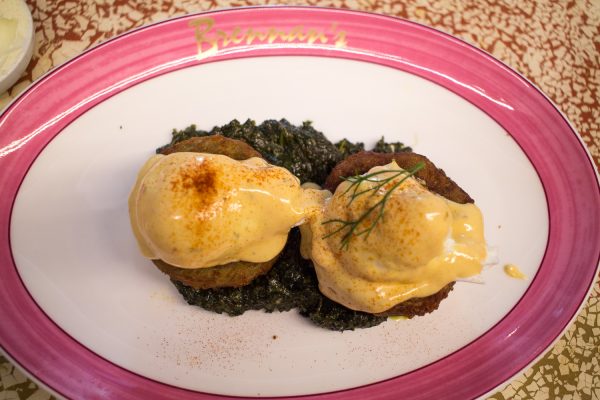 I had the Eggs Sardou, another variation of benedict made with fried artichoke hearts on a bed of creamed spinach. It was decadent and rich and something I would totally order again.

Tea at the Windsor Court Hotel 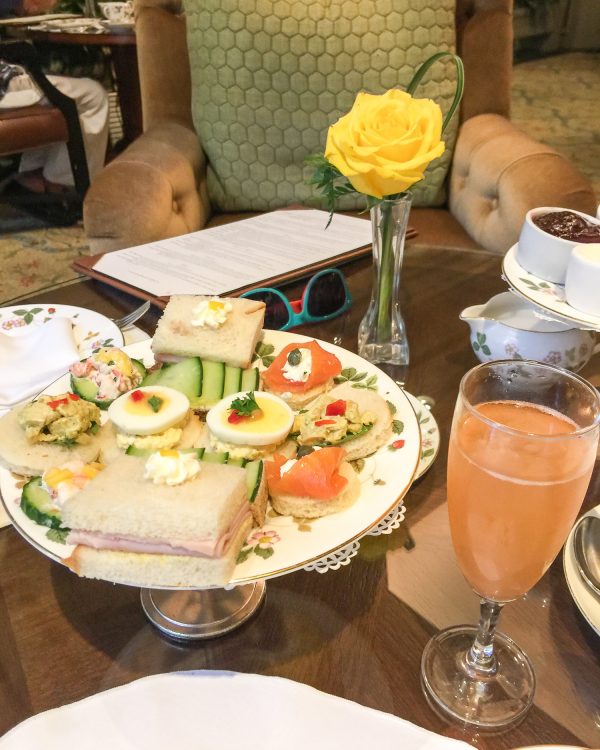 My friend Heidy recommended going to the Windsor Court Hotel for their afternoon tea. Since Charles is British, he loves the opportunity to have a traditional English tea, and he was pleased with the affordable prices of the tea at the Windsor Court Hotel. Full tea service with a pot of tea, plenty of sandwiches, scones, and desserts, plus a cocktail was only $37 a person. We might have also spotted Chance the Rapper in the lobby. 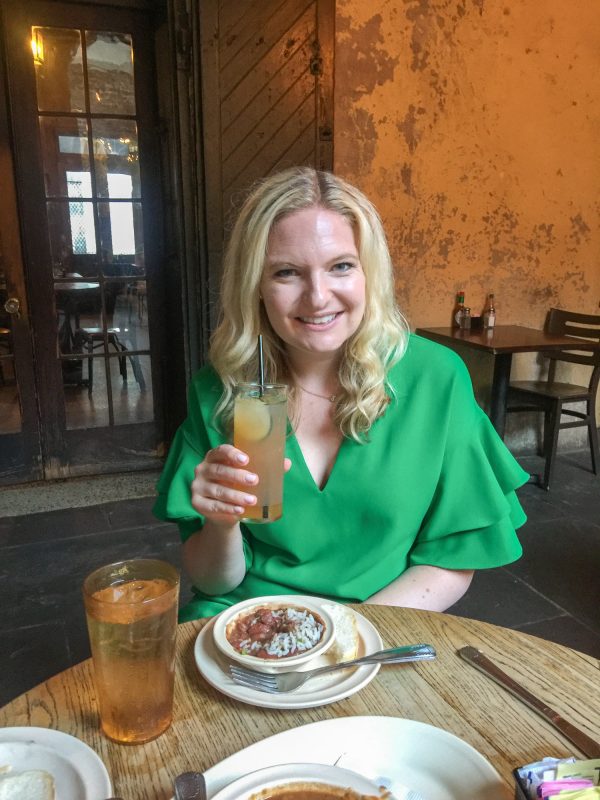 The muffuletta is a classic New Orleans sandwich, and the place to try it is Napoleon House. The restaurant is over 100 years old, and it is housed in a historic building that is over 200 years old. When you go, you need to order two things: a Pimm’s Cup and a Muffuletta. 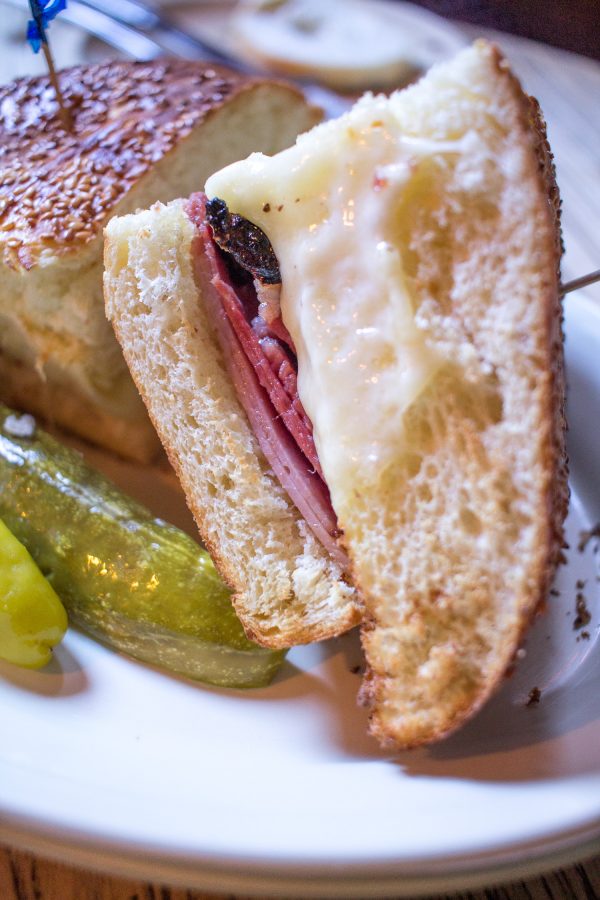 The muffuletta is massive, a half order was enough for the two of us. It is made on fresh soft bread with ham, genoa salami, pastrami, swiss cheese, provolone cheese and housemade olive salad. The pastrami is house made and delicious. A Pimm’s Cup is a sweet British cocktail that is hugely popular in New Orleans. Napoleon House has several variations on their menu; I had the Englishman’s Pimm’s Cup which has cucumber in it. It was cool and refreshing, and perfect on a hot summer day. 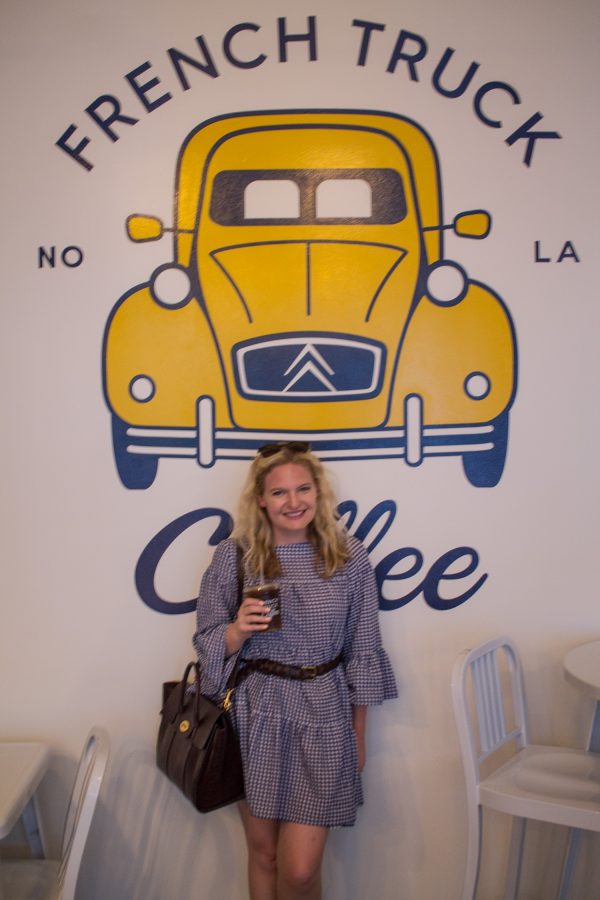 Ice tea is a must in the South. It keeps you caffeinated and cools you down. We stopped into French Truck Coffee, a local chain of coffee shops. I had iced tea, but Charles saw that they were making a serious cold brew with some complicated contraption that looked like it was stolen from a science lab. Charles loved the smooth taste of the cold brew. The coffee from French Truck Coffee is a staple at many restaurants in New Orleans, including Ruby Slipper, so you can try it without seeking out one of their locations. 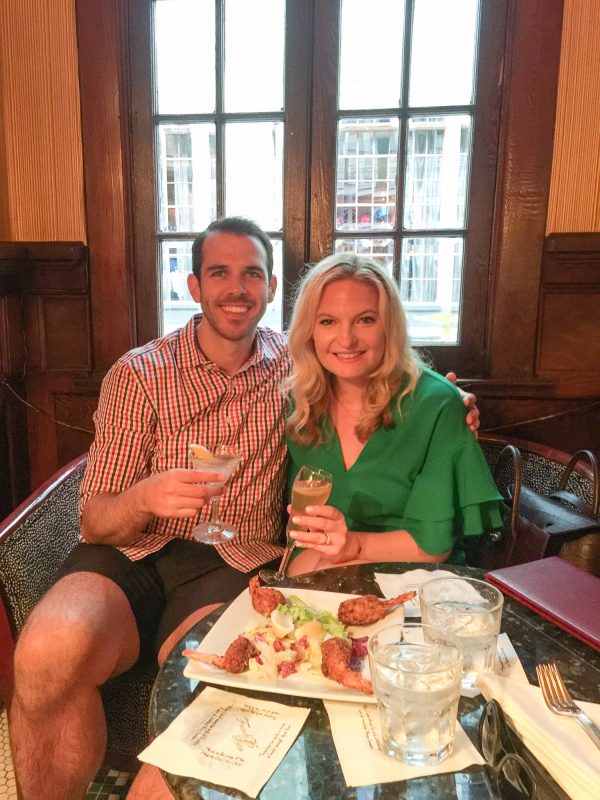 We loved this old historic bar with a tin ceiling and a cozy romantic atmosphere. I had the French 75 – the drink they are known for – while Charles got a martini. 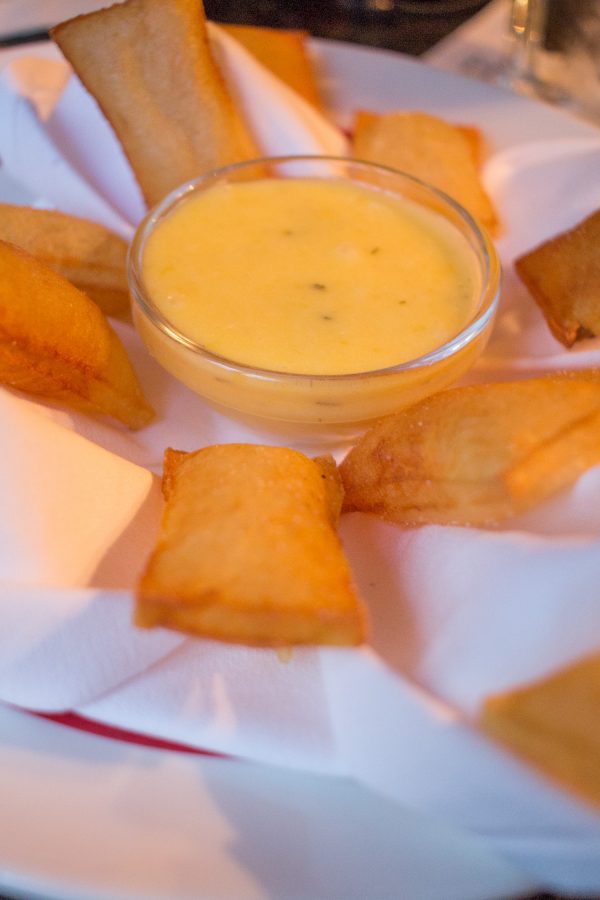 I had read that the souffle potatoes at French 75 are one of the must-try foods in New Orleans, so obviously we ordered some. They were light and airy on the inside and crisp on the outside. Definitely worth trying! Charles also had the fried shrimp and ate all of them even though we had just eaten dinner.

The best brunch we had was at Ruby Slipper. The wait was long – just about an hour – but it was 100% worth it. The line moved quickly, and when I caught a glimpse of the food coming out of the kitchen I didn’t mind waiting. Ruby Slipper does have a handful of locations, we tried to walk from one location to another to see if the wait was shorter, but it was almost the same wait time. 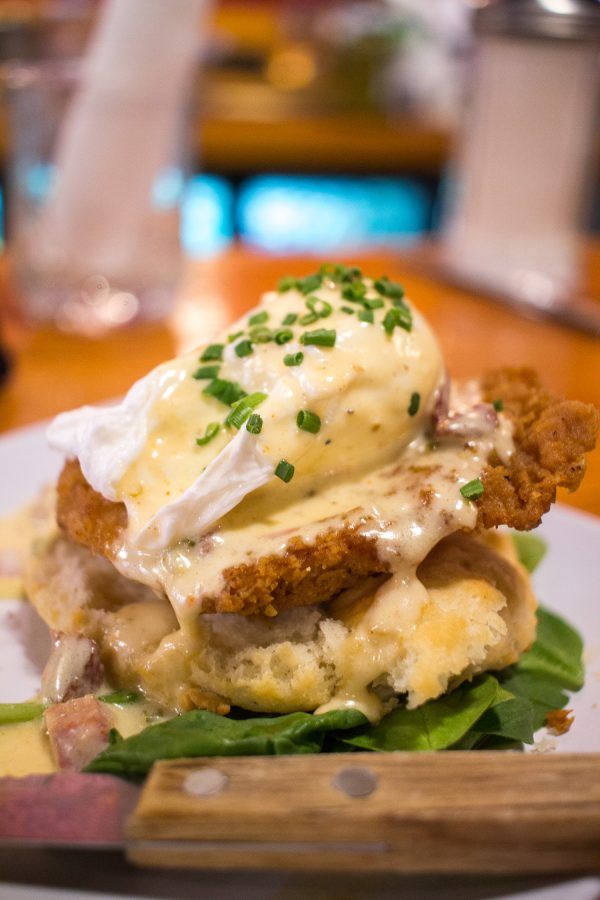 One thing I love about Ruby Slipper is that they have an item on the menu called “The Peacemaker”. For a small upcharge you can try two different benedicts! How amazing is that?! Charles and I each ordered the peacemaker, and I ordered a cinnamon bun pancake too. It was a lot of food, but we ate almost every bite. 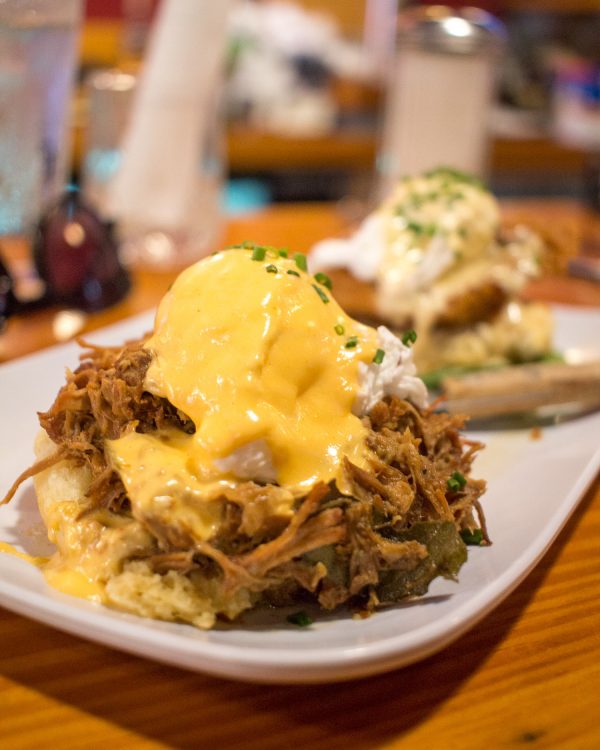 I like pancakes, but I tend to prefer eggs. Ruby Slipper lets you order a single pancake so that you can have a taste of something sweet. Charles isn’t a pancakes guy. I don’t think I have ever seen him eat them, but he ate half of the pancake at Ruby Slipper. It’s just that good – Chicagoans – it’s on par with Southport Grocery.

Cocktails at Carousel Bar at the Hotel Monteleone 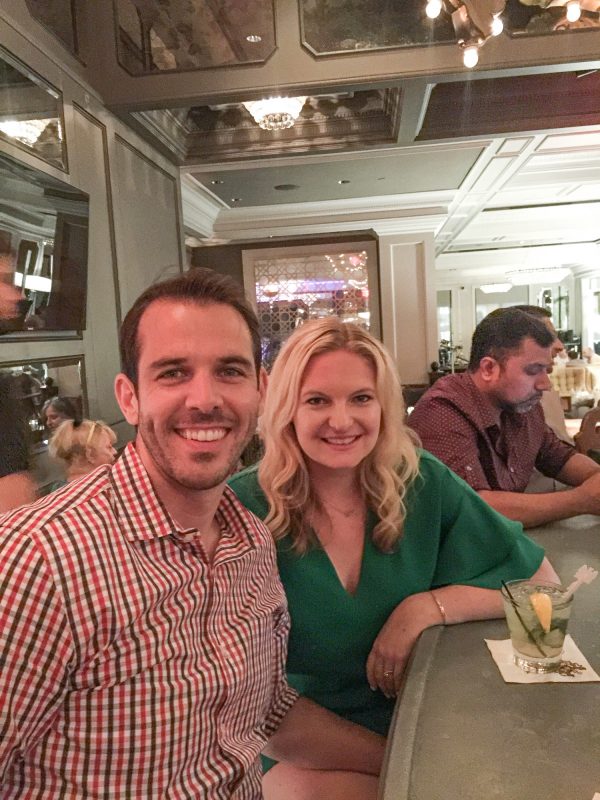 This is something that EVERYONE told us to do in New Orleans. Carousel Bar is a large bar that has a carousel in the center that has been converted into a bar. The bar stools very slowly spin around a bar in the center. They often have live music – the first night they have a great jazz band playing and it was a party at the bar. 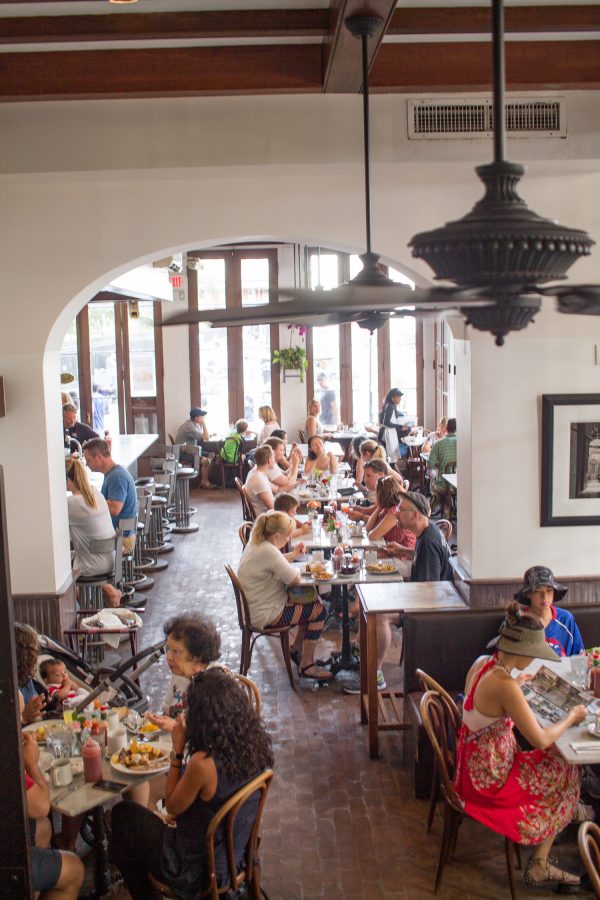 Our third and final brunch was at Stanley Restaurant, right on Jackson Square. The bright sunlit restaurant attracts a mix of locals and tourists, and when we arrived just before 10 am there was no wait for a table. 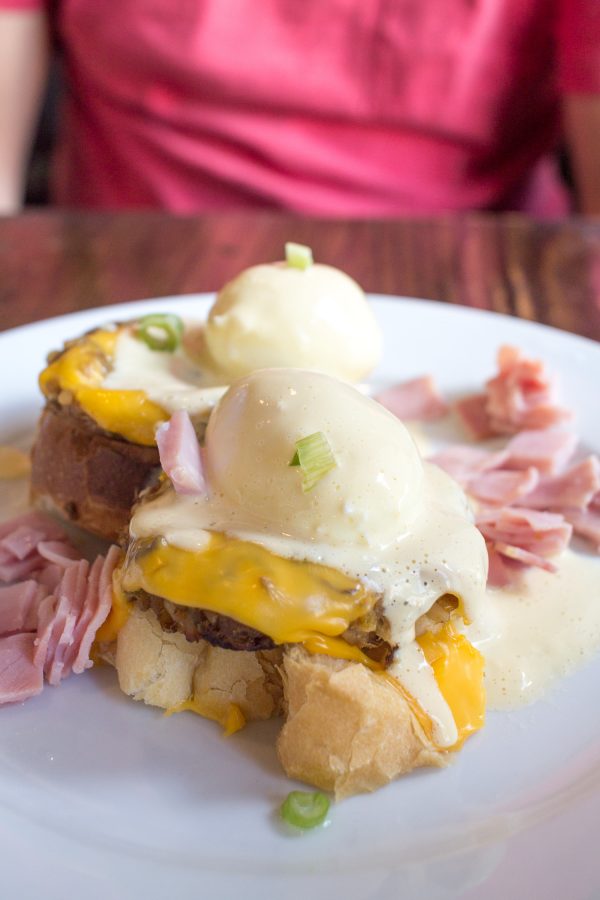 Charles had the Breaux Bridge Benedict… he ordered a benedict every day in New Orleans. This version was made with homemade sausage, ham, American cheese, poached eggs, and hollandaise on French bread. 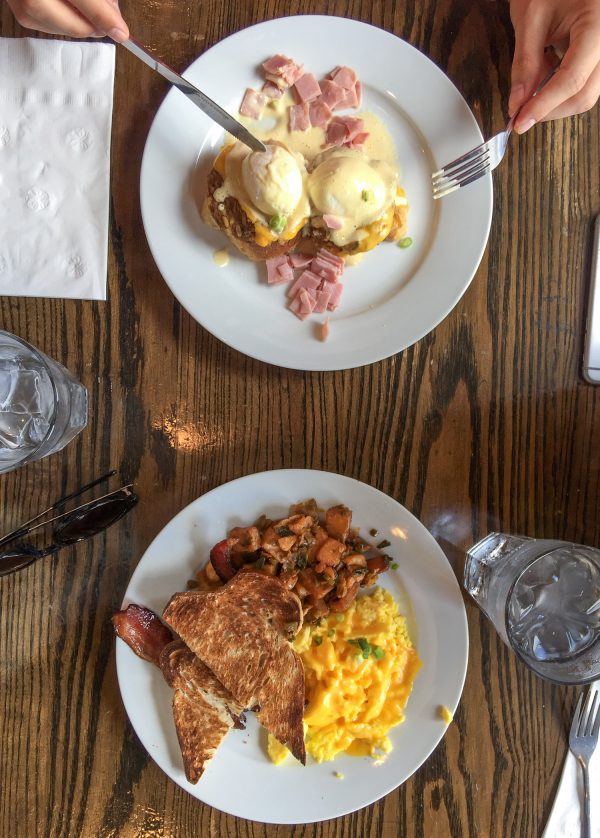 I had the Stanley Classic Breakfast because sometimes there is nothing better than cheesy scrambled eggs, hash browns, bacon, and toast. 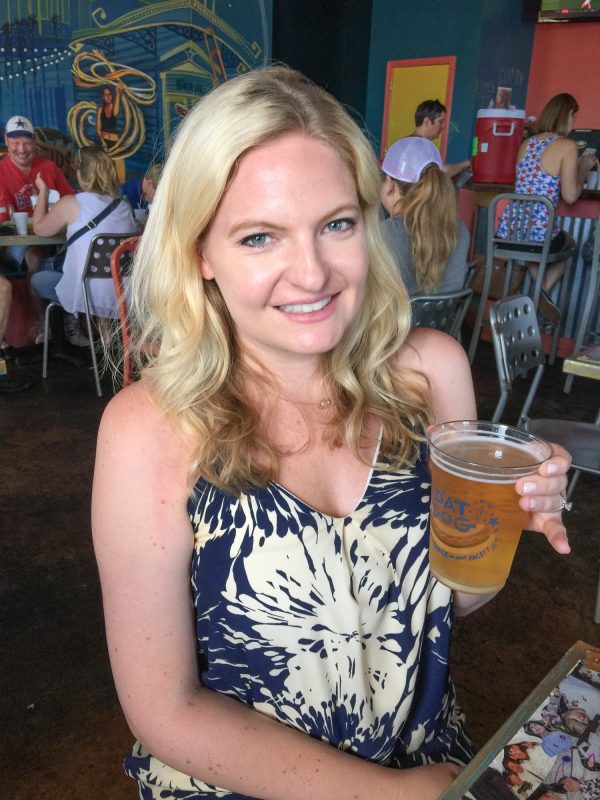 Our last meal was at New Orlean’s legendary hot dog joint, Dat Dog. I had heard about Dat Dog since it often came up in conversation with Hot Doug’s (Chicago’s now shuttered famed home of gourmet hot dogs). Charles loves a great hot dog, so we went to check out Dat Dog. We grabbed seats upstairs and I went to the bar to order. I asked the bartender for a recommendation for a refreshing beer and he replied, “PBR is always good.” Solid point, and it seemed like a fitting pairing for hot dogs and fries. 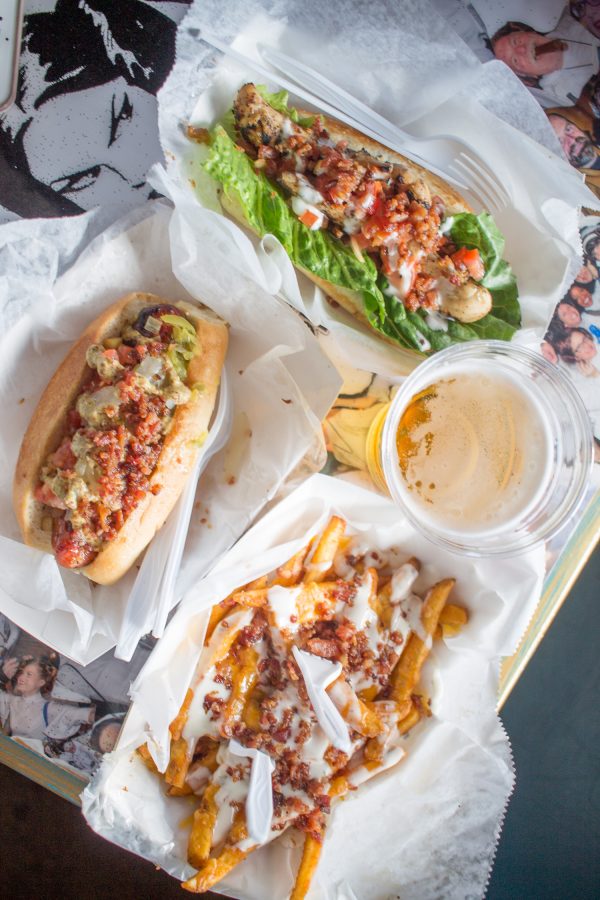 Charles ordered the Bacon Werewolf made with Slovenian sausage, bacon, sauerkraut, dill relish, grilled onions, tomatoes, and creole mustard. I had the GBLT which is made with chicken, bacon, lettuce, and tomatoes, with ranch dressing. 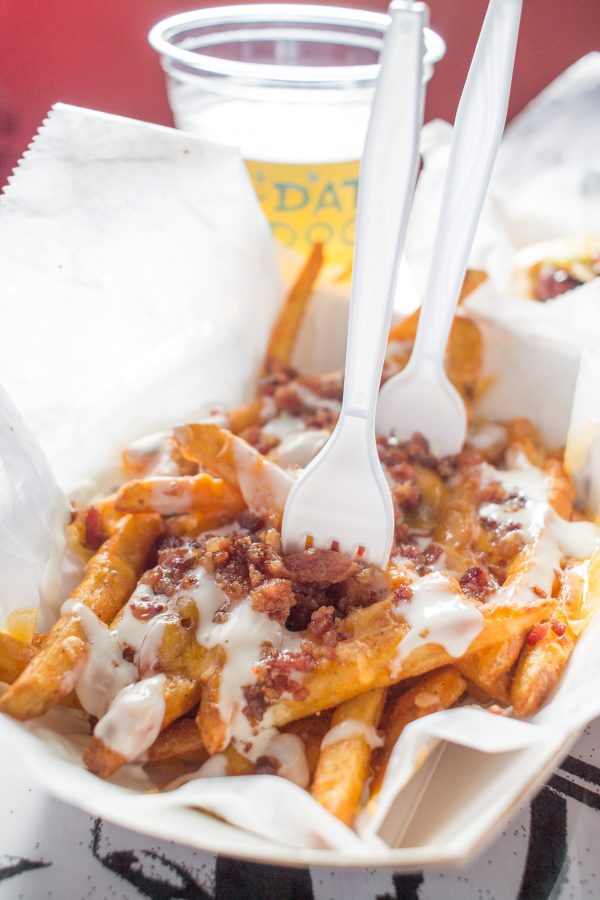 The fries might have been the most exceptional part of the meal. The cheddar bacon ranch fries exceeded my expectations. Sometimes fries get soggy when you add a lot of toppings, but that wasn’t the case. Also – anything with cheese, bacon, and ranch is delicious, it’s basically the holy trinity of flavor.

I know we only scratched the surface when it comes to New Orleans restaurants. I want to let you know that my friend (shoutout to Elizabeth!) also recommended some fancier restaurants. The fancier places are jackets required for men, which is why we decided to skip them. I wasn’t going to make Charles suit up in 85-degree heat, so we kept it casual. Elizabeth highly recommended Galatoire’s on Bourbon Street and Commander’s Palace for Jazz Brunch.

Go ahead and share your New Orleans restaurant recommendations in the comments – I am excited to hear your thoughts.

Want to save this guide of What to Eat in New Orleans? Here is an image for you to pin: 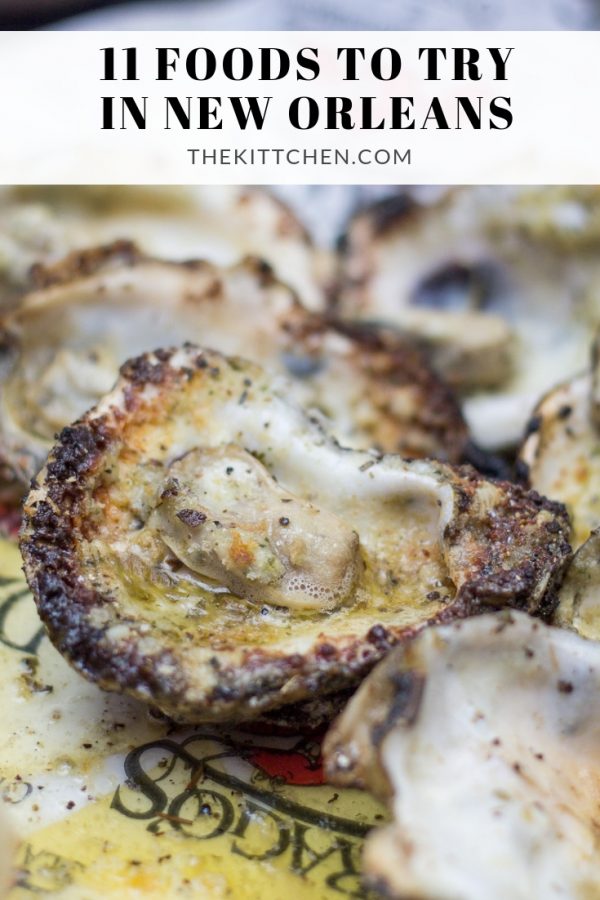